A DAD drove 350 miles with his wife and kids in the car to get a KEBAB – then crashed on the way home.

The driver, who had no licence or insurance, was flouting Covid-19 restrictions when he crashed on the M5, near Portishead, Bristol. 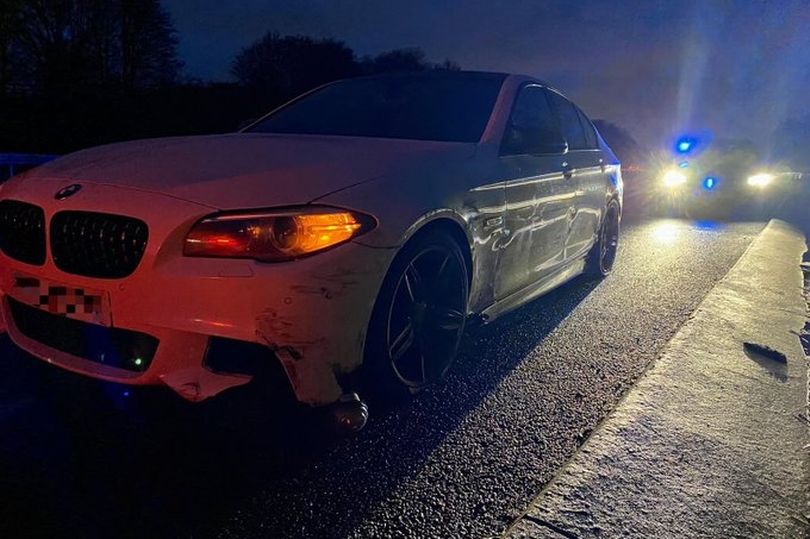 The driver had no licence or insurance and crashed on the M5Credit: BPM Media

The man, with his wife and two children, told officers they had travelled from Exeter to Coventry to pick up a kebab, and were on their way home when the smash occurred.

Officers fined the motorist for various offences, including driving with no licence or insurance, and coronavirus breaches.

Avon and Somerset’s road policing unit tweeted: “RTC on the M5 at Portishead.

“The driver had no licence or insurance.

“He had his wife, and 2 young children in the vehicle.

“Driver reported for various offences including the #Covid breach.”

One user tweeted: “Exeter – Coventry return to buy a kebab uninsured + unlicensed driver, sure went out of his way to provide for his family.

Another bluntly labelled the driver an “Idiot!!”

According to current lockdown rules, people should be staying at home, and only travelling for essential reasons.

Police recently warned that they would move quickly to slap lockdown rule breakers with fines.

“Reasonable” excuses for being out of your home include:

It comes as another dad and his two children, aged eight and 12, were rescued from the sea yesterday – after breaking lockdown to visit the beach during Storm Christoph.

Furious cops have hit out at the reckless father after the family were pulled from the sea off Anglesey in north Wales as heavy rain and strong winds battered the coast yesterday.

Emergency services were called to Llanddwyn Beach during the afternoon after the three were cut off by rising tides on a walk,  North Wales Live reports.

RNLI volunteers and local cops helped the family back to the shore – before the officers wrote up the man for breaching Covid restrictions.

And last week four hungry pals who drove a whopping 68 miles to pick up a feast from McDonald’s were hit with a £200 fine for breaching Covid rules.

The group, who were each from different households, was pulled over in Uttoxeter, Staffs., last night after travelling from the Manchester area.

Police revealed the friends had made the massive journey to get to a McDonald’s – despite there being dozens of branches of the fast food giant closer to home.

When police enquiries confirmed the four were not from the same household, it became clear that the journey breached the newly implemented lockdown rules.

Their trip turned out far more expensive than planned as a result, when officers slapped each of them with £200 fines.