Race and ethnicity data wrap-up: For 11 months, we have shown that the COVID-19 race and ethnicity data published by U.S. states are patchy and incomplete—and that they nevertheless have indicated major inequities in the pandemic’s effects. Both of these things are true of the demographic data available from the CDC: Many data are missing, and what data are reported show ongoing disparities. Our introduction to the federal data will be posted later this week, and we’ll be publishing deeper analyses in the coming weeks.

As we wind down our compilation efforts, the United States is at a crucial moment in the pandemic: Decisive action now is our best chance at preventing a fourth surge in cases and outpacing the variants, which may be more transmissible than the original virus according to preliminary (preprint) data. Over the weekend, the FDA issued a third Emergency Use Authorization for a COVID-19 vaccine, this time for Janssen/Johnson & Johnson’s adenovirus vector vaccine, which showed impressive safety and efficacy results in its global clinical trials. The Biden administration announced Tuesday that the U.S. should have enough COVID-19 vaccine doses for every adult by the end of May—a dramatic acceleration from previous timelines.

Meanwhile, concerns over an uptick in variant cases are growing in Florida after researchers noted that 25 percent of analyzed samples from Miami-Dade County’s Jackson Health public hospital were cases of B.1.1.7. Although partnerships between the CDC and other labs have increased the number of specimens sequenced from about 750 a week in January to 7,000–10,000 a week in late February, this still allows for the sequencing of less than 3 percent of all cases in the United States. 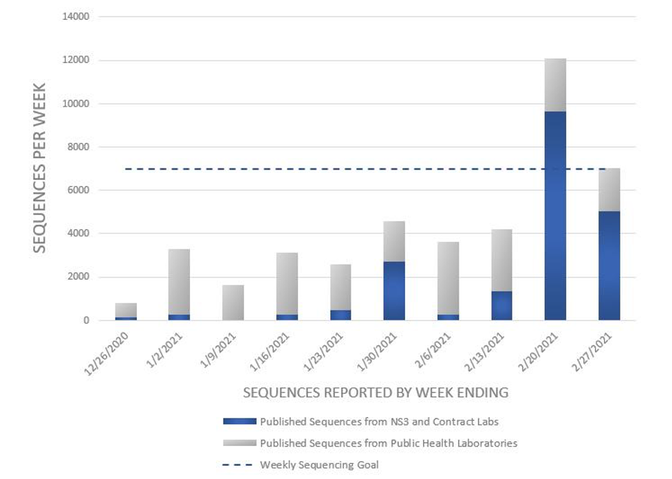 New York City has promised to quadruple the number of samples it sequences during the month of March, from 2,000 to 8,000 a week, which is more than the entire country’s labs sequenced in the week ending February 27.

Today’s weekly update is our 39th and last. We began writing them back in June 2020 as a way of offering a deeper interpretation of data points that was less jittery than those in the daily tweets. As we puzzled through the data and watched for indications of changing trends, we’ve tried to help people understand what has happened to us as the pandemic has ebbed and surged.

Although our data compilation will come to an end on Sunday, March 7, our work at the COVID Tracking Project will continue in other forms for another few months, as our teams complete their long-term analyses and wrap up documentation and archiving efforts. We’ll continue to post our work on the CTP site and link to it on Twitter until we finally close up shop in late spring.

Throughout the year that we’ve compiled this data, we’ve tried to explain not only what we think the data mean, but how we came to our conclusions—and how we tested and challenged our own analyses. We hope that one result of our doing this work in public is that our readers feel better prepared to do the same for themselves and their communities.

The federal government is now publishing more and better COVID-19 data than ever before. Some gaps remain, but far fewer than at any previous moment in the pandemic. To those of you who have relied on our work this year, thank you for your trust. We’ve tried very hard to deserve it, and we believe that we’re leaving you in good hands.