COPS have set up Covid checkpoints to catch lockdown flouters – as thousands hit parks and beaches to soak up the sun.

Cooped-up Brits growing weary with the national restrictions headed outdoors today to make the most of the balmy 13.8C heat. 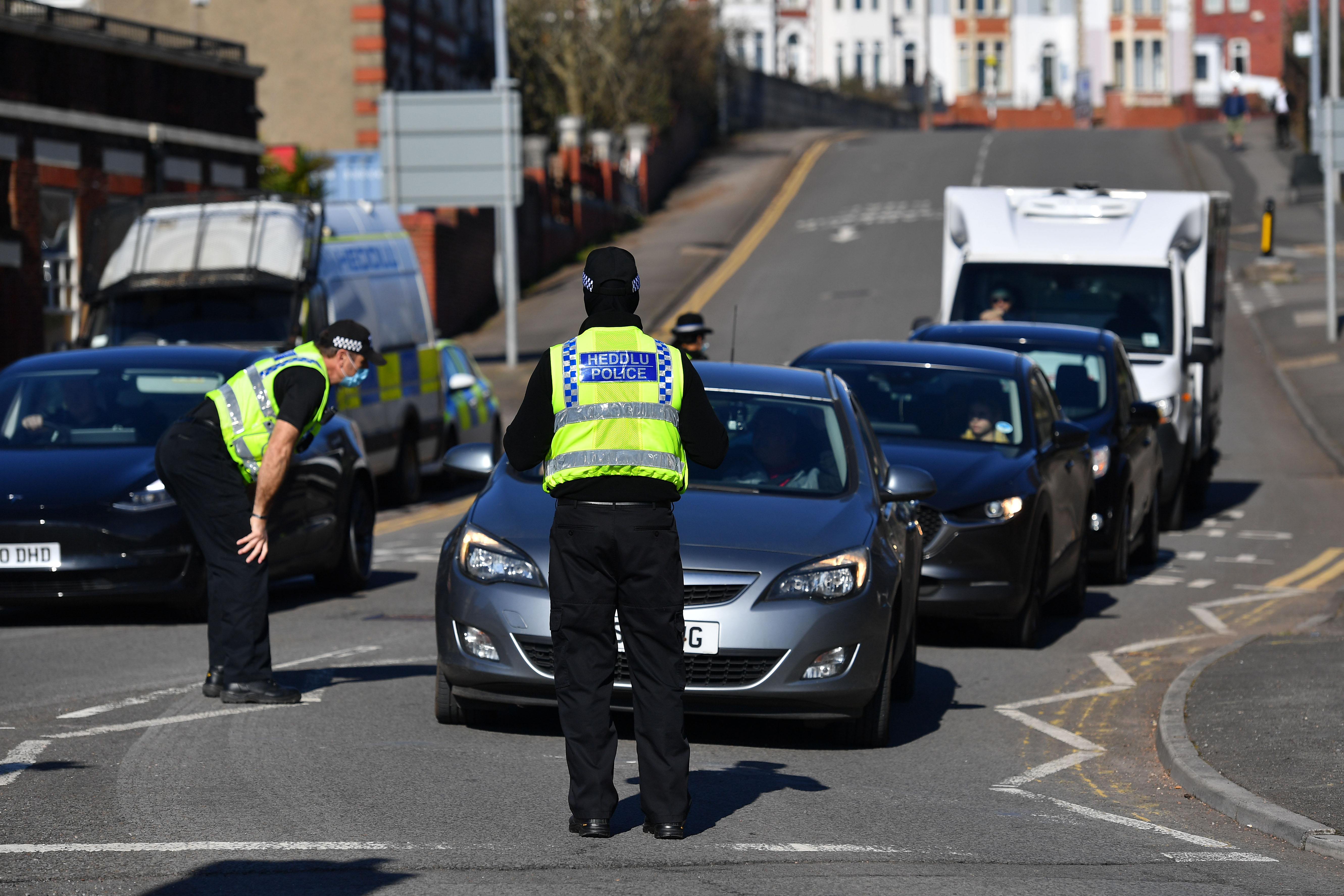 Cops are stopping drivers heading for Barry in south Wales after Brits head for beaches and parksCredit: Wales News Service 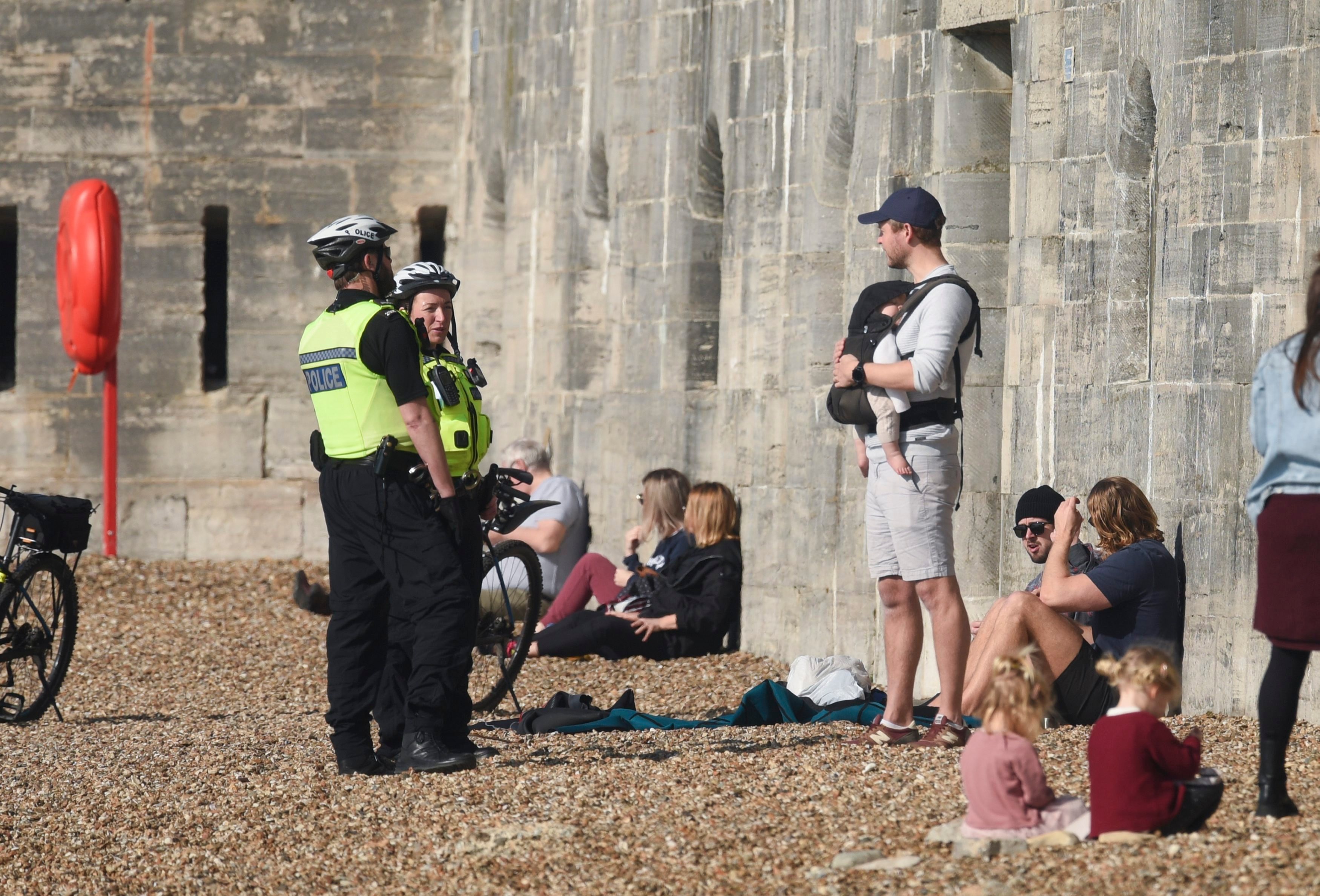 In Portsmouth, police were seen chatting to families and friends sitting by the sea wallCredit: Solent News 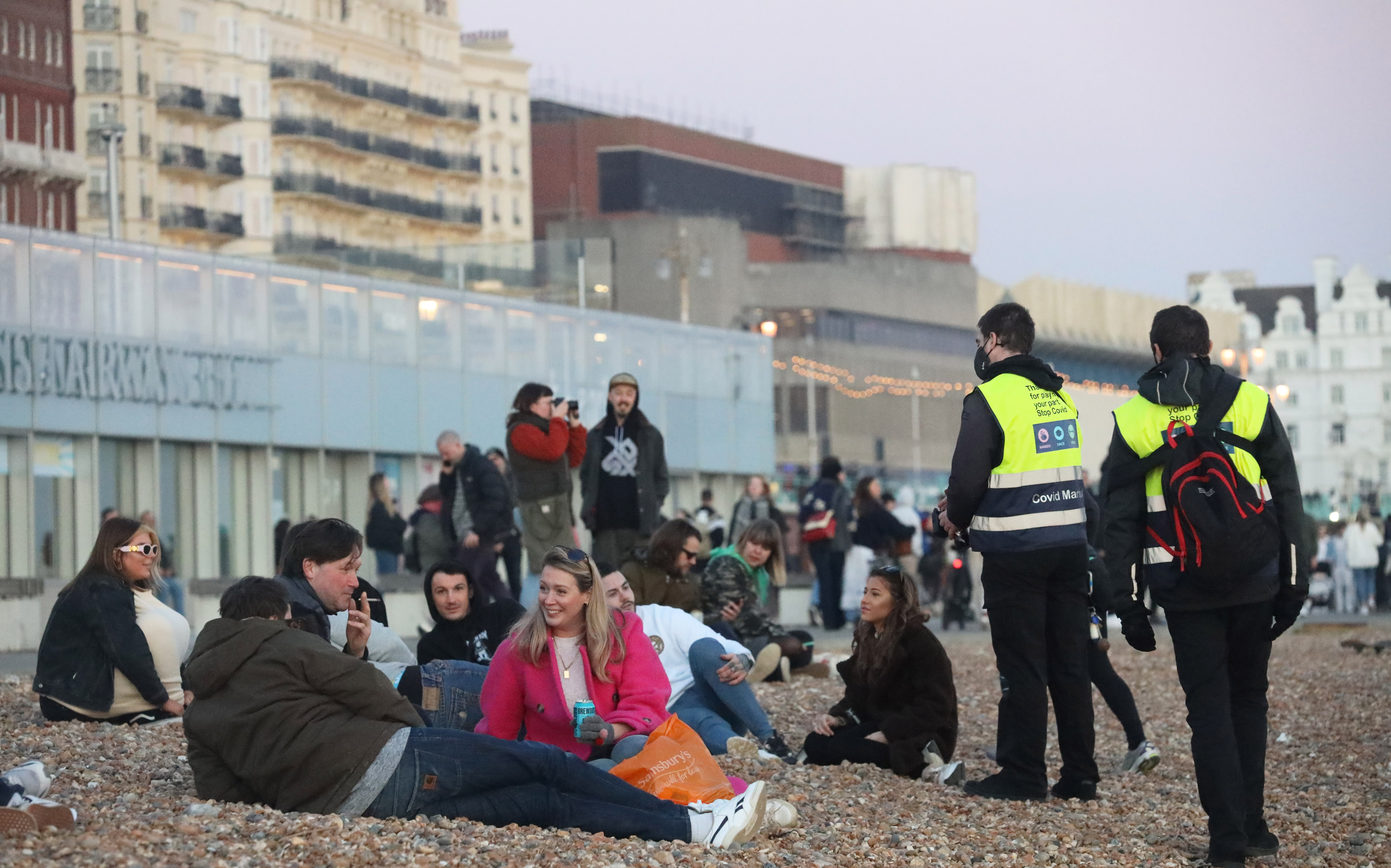 PCSOs and Covid marshals have also faced a busy time of in Brighton, after groups of friends gathered to sit on the pebblesCredit: Brighton Pictures

But health officials have say people must follow the order to stay at home – despite balmy weather ahead of the first day of meteorological spring tomorrow.

And across the country, PCs are out on duty to send those who bend the rules straight back home.

Police are pulling over motorists heading to Barry in South Wales to find out whether their journey is essential.

Officers in masks have been seen chatting to drivers before deciding whether to let them continue – or make them turn around.

And they warned: “We’ve received numerous reports of crowds of people at beaches and other beauty spots across South Wales.

“Please remember that Welsh Government restrictions state that exercise should start and finish at your home – you shouldn’t be driving to these places. 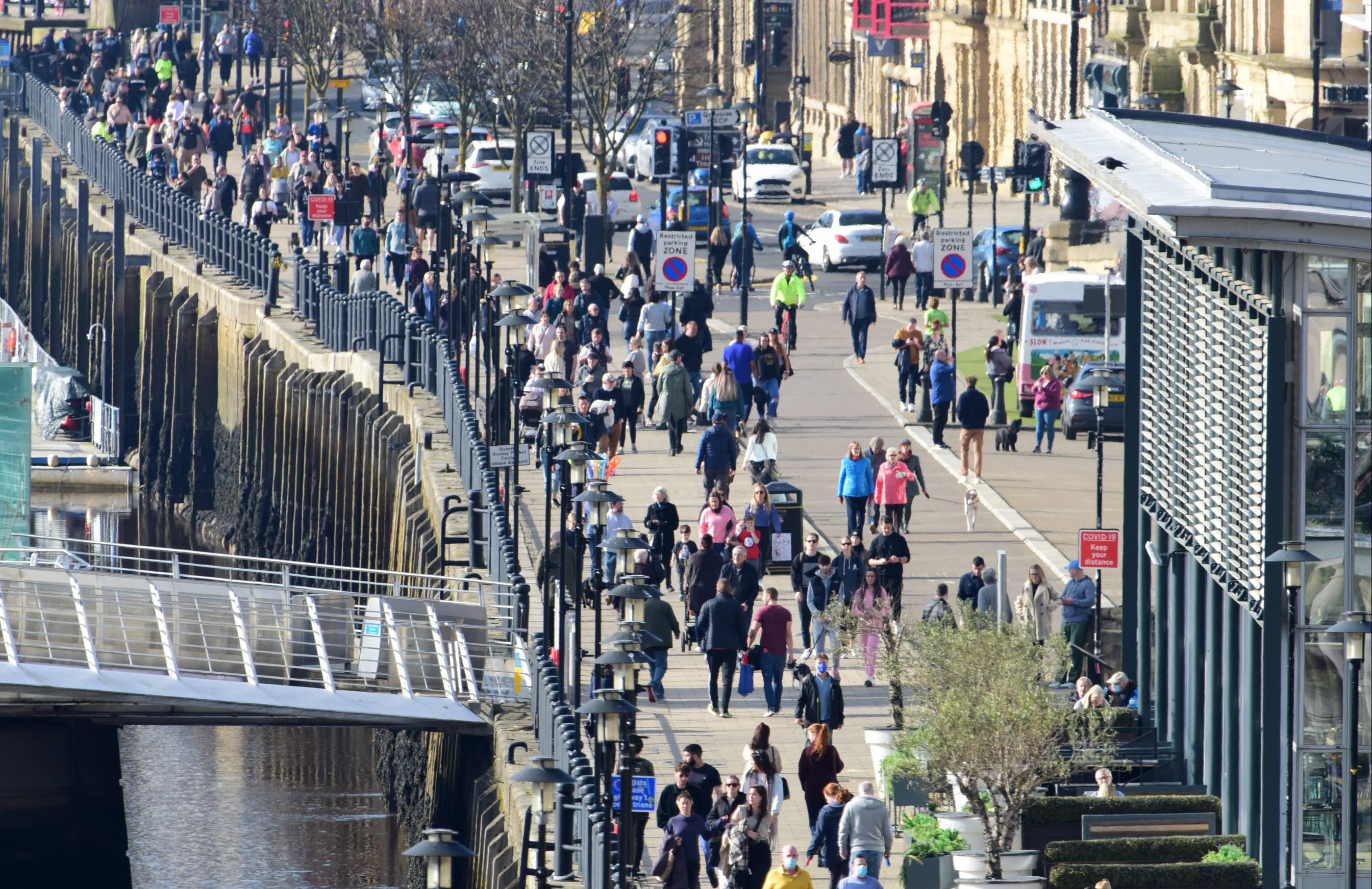 Newcastle was busy this morning as thousands went out to make the most of the weatherCredit: North News and Pictures 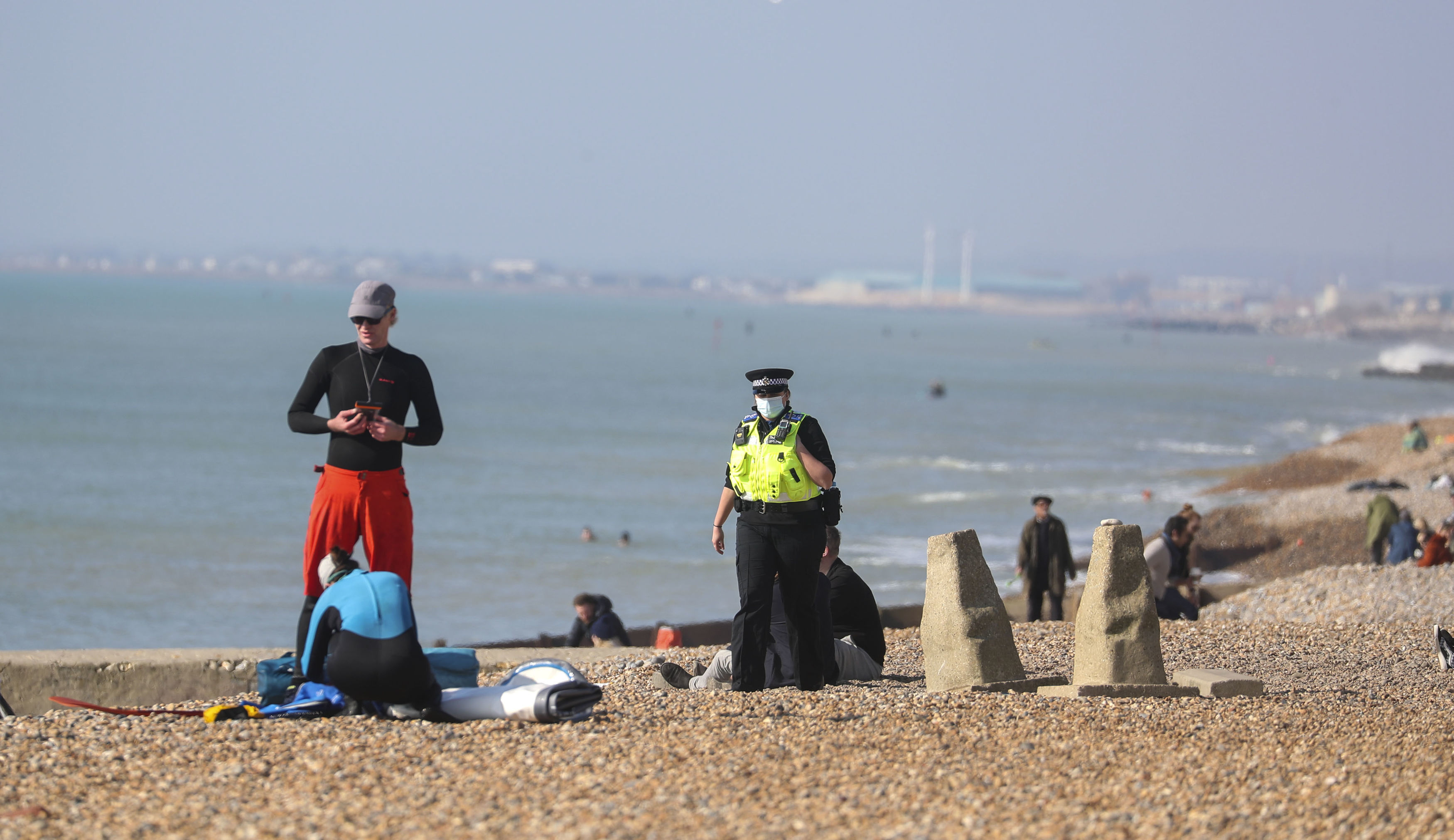 People living in England have been urged to stay at home and keep to lockdown rulesCredit: PA:Press Association 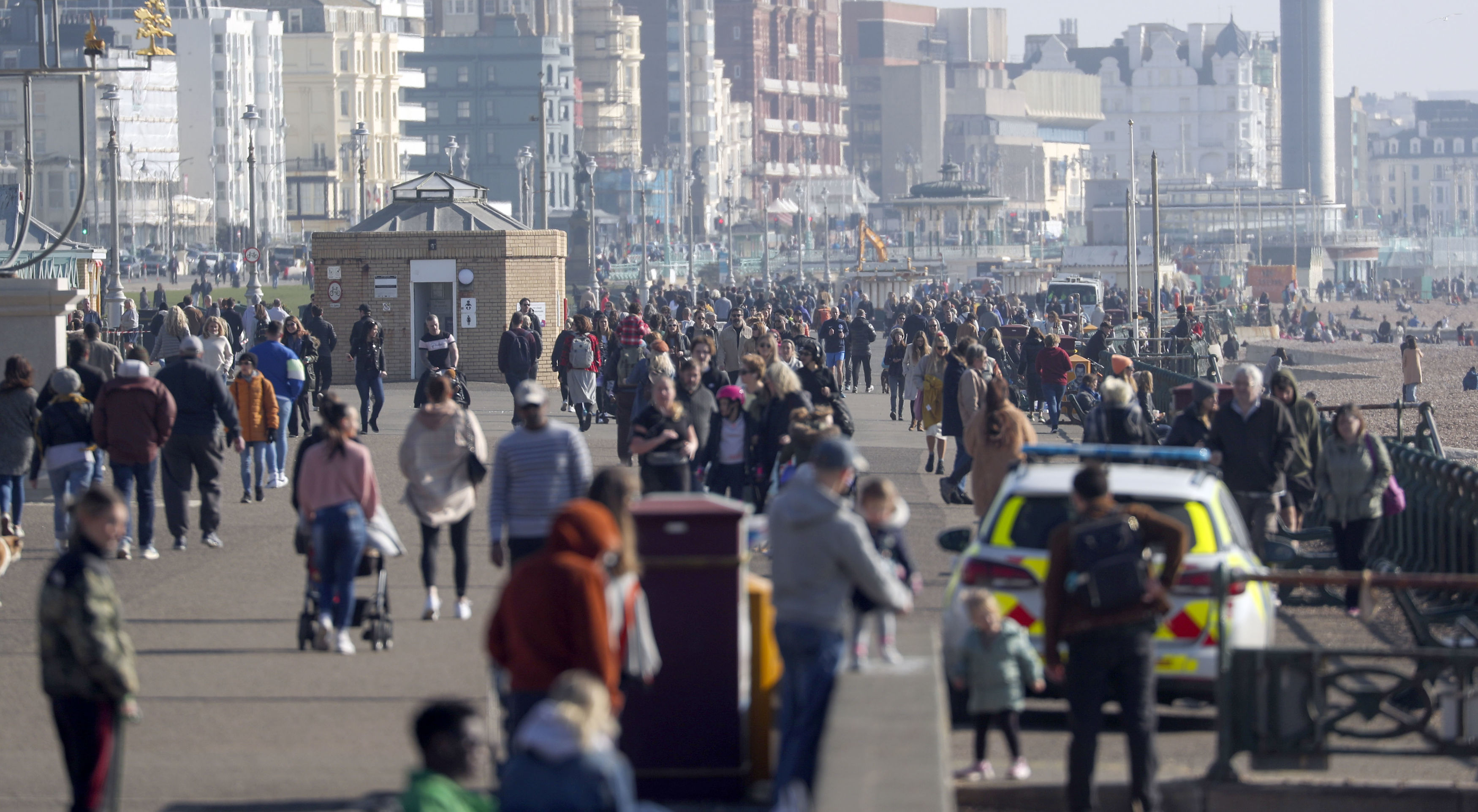 But an early spring has caused problems for police trying to enforce the rulesCredit: PA:Press Association 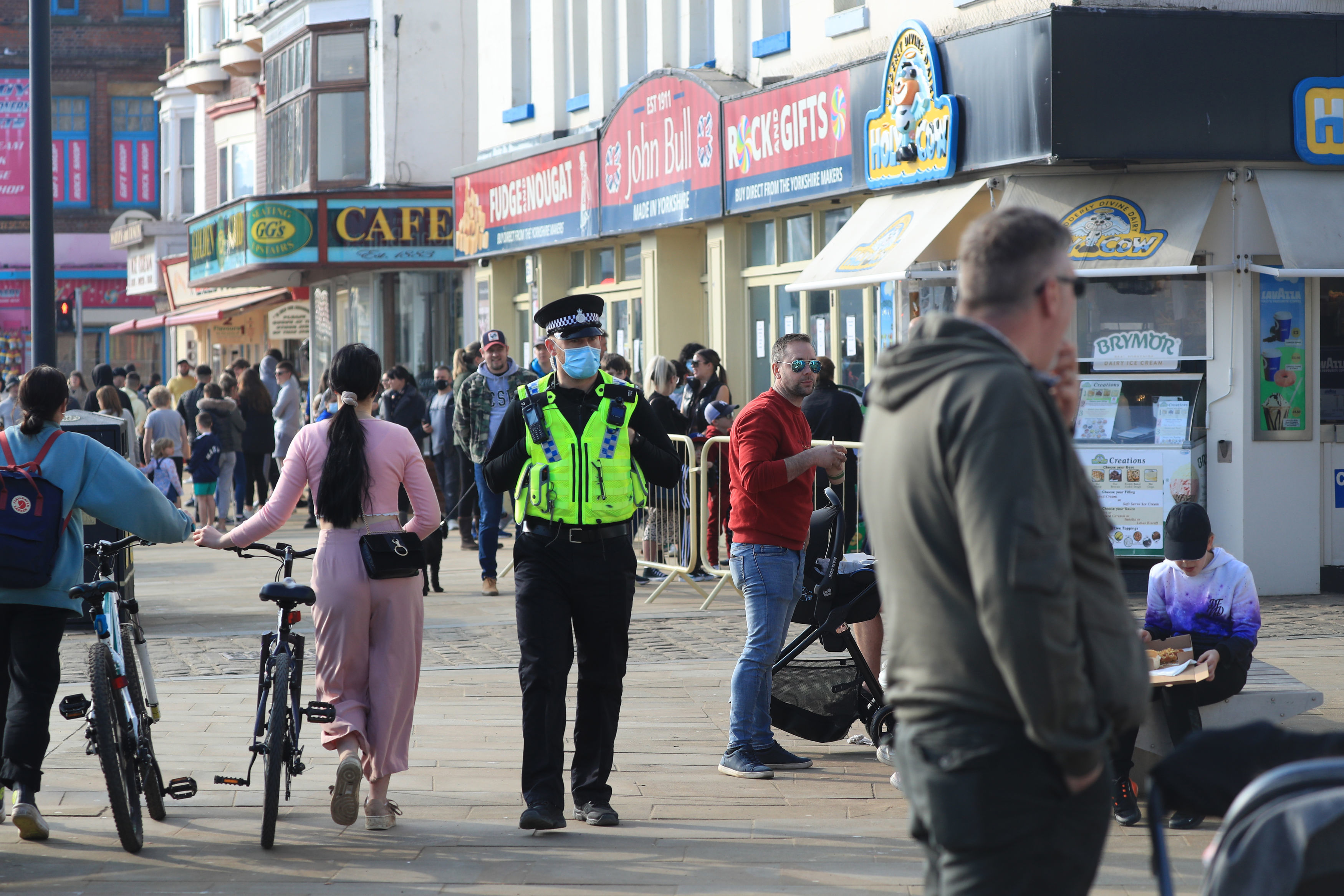 Officers in masks are patrolling in Scarborough to make sure people stick to the rulesCredit: PA:Press Association

“We are working alongside local councils to close some car parks, and will be stopping cars to check whether the journey is essential.

“Please understand that we are doing our best.

“However, we can’t be everywhere all of the time. It’s up to us all to do the right thing.”

Meanwhile, community support officers and Covid marshals are out in Brighton trying to break up groups of people sitting on the beach.

Officers in high-vis jackets are walking along the shingle to speak with anyone seen sitting down.

Cops said: “It’s a beautiful day, the sun is shining.

“However, please be mindful of Covid restrictions that are in place.

#COVID19 | We have received numerous reports of crowds of people at beaches and other beauty spots across #SouthWales.

Please remember that Welsh Government restrictions state that exercise should start and finish at your home – you shouldn’t be driving to these places. ❌? pic.twitter.com/V8xipNHbfh

“Is your journey essential? If not stay home, stay safe.

“Officers are out on patrol today, engaging with the public and reinforcing the current national lockdown measures.

“With the finish line in sight, let’s not drop the ball now.”

In Portsmouth, a family soaking up the sunshine by the sea wall were seen being spoken to by officers.

A little further down the coast in Bournemouth, hundreds of people parked their cars along the clifftop to get to the beach for their exercise.

People living in cities are among those making the most of the weekend. 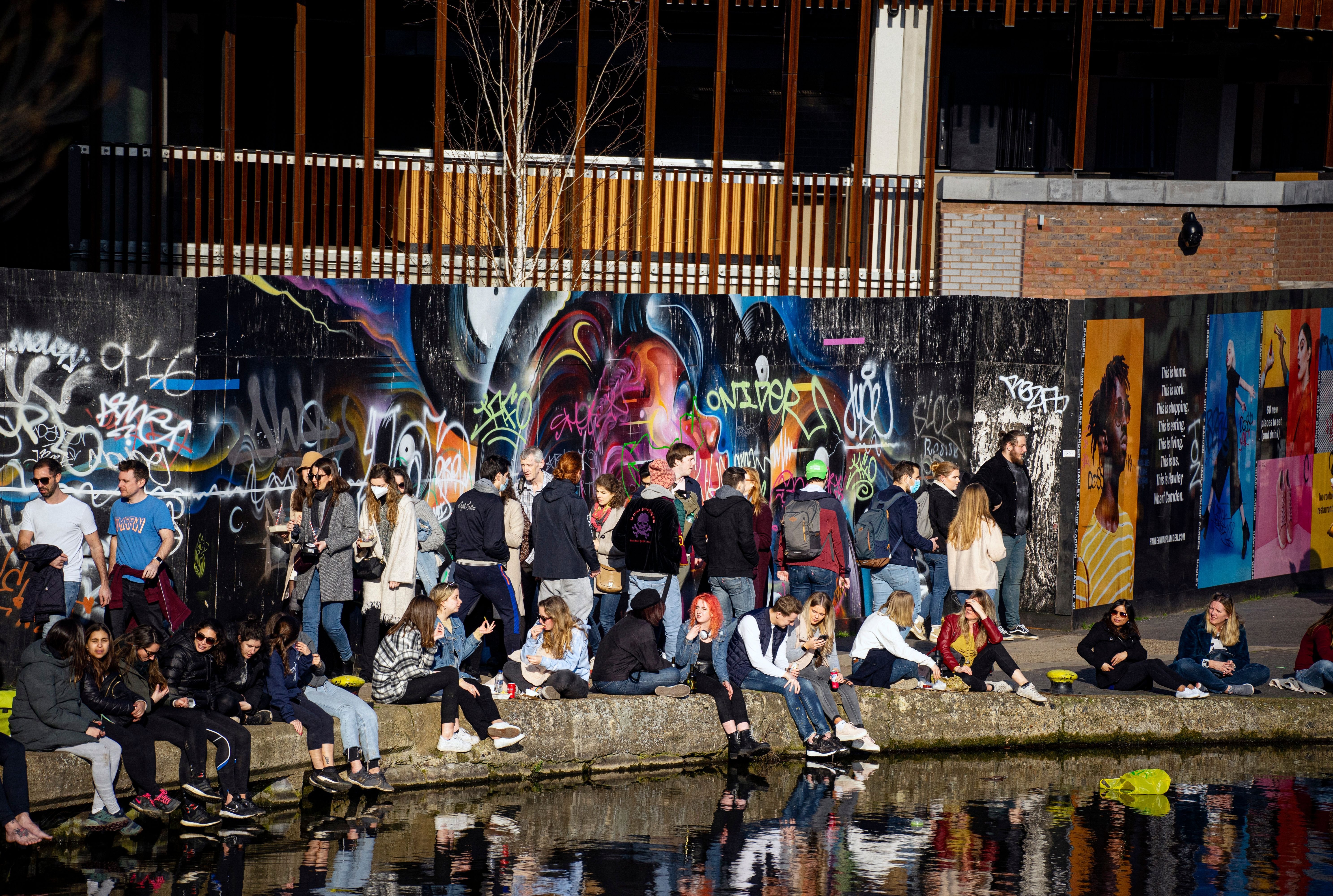 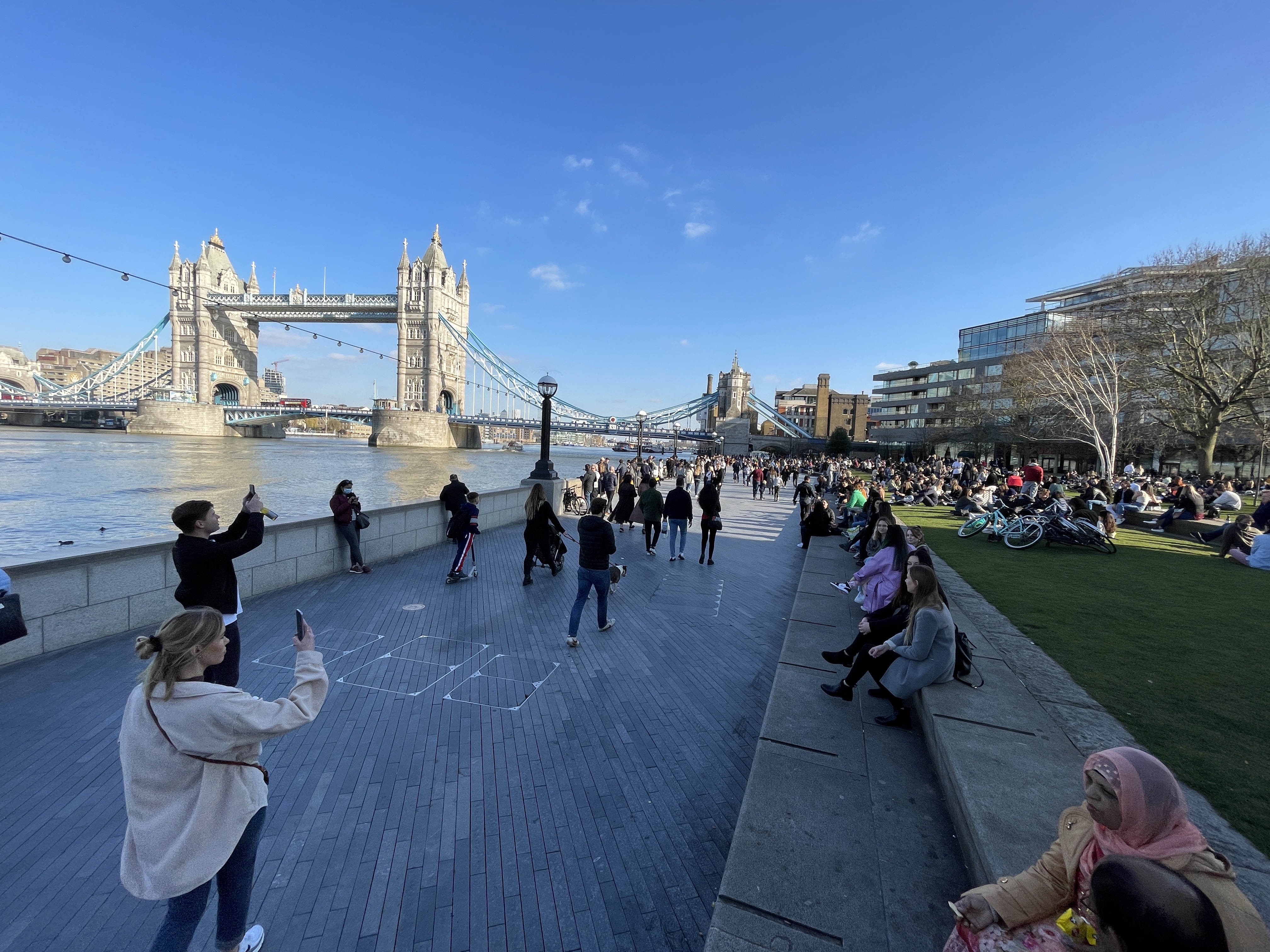 Walkways alongside the River Thames have also been busy today 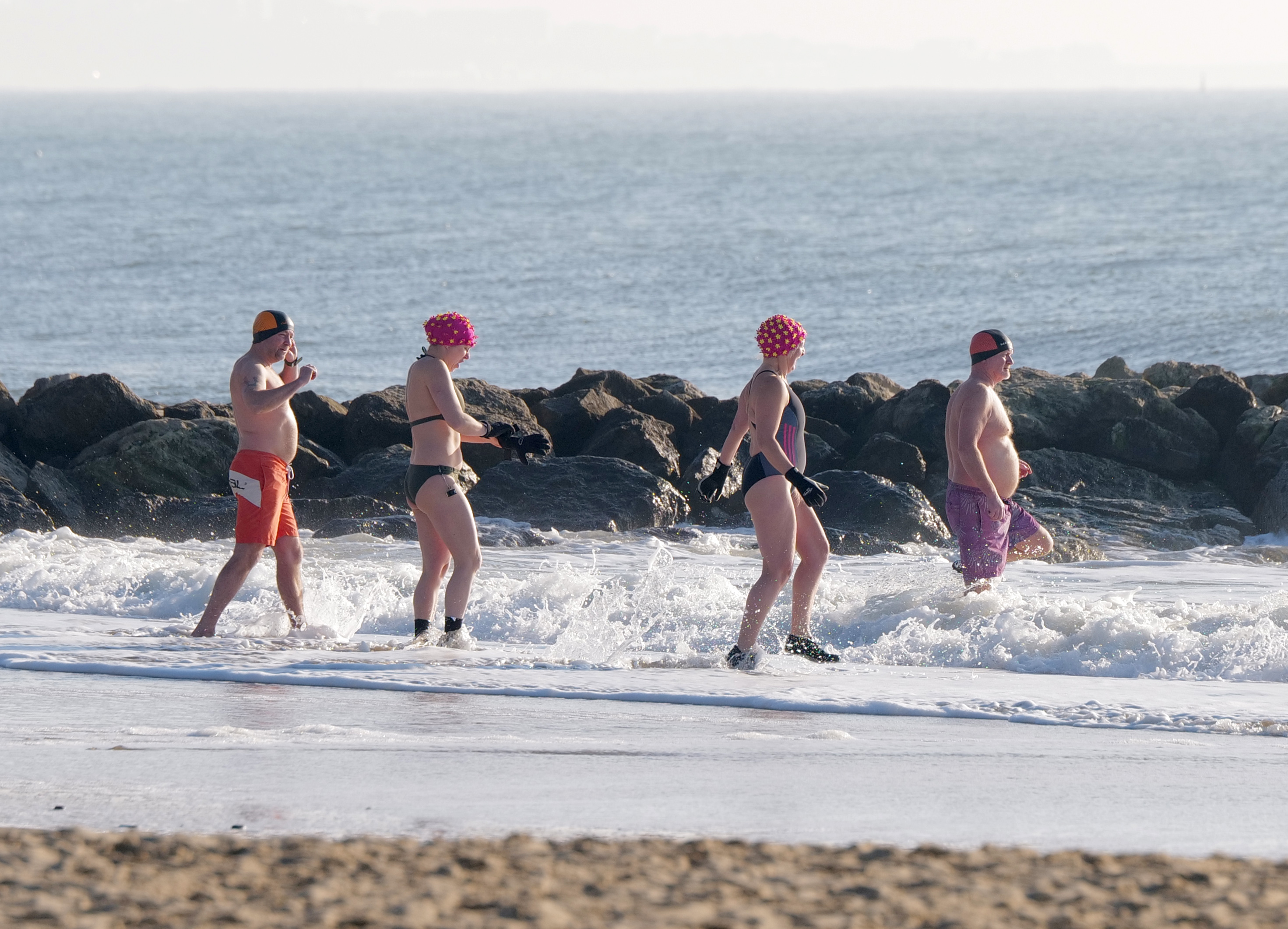 And in Bournemouth, brave sea swimmers braced the chilly February sea to take a dipCredit: w8media

Friends sat along Camden Lock in London to chat this morning, while in Newcastle, thousands of people walked along the quayside in the sunshine.

But one group of Covidiots were handed fines last night outside Buckingham Palace after driving from the Midlands to London.

Met Police officers took to Twitter to say: “This car was stopped next to Buckingham Palace last night on our way in from deployment.

“There were three occupants, all from different households, who had driven from the Midlands to see the sights.

“They were sent home with fixed penalty notices for Covid breaches.”

A ‘braindead’ family also got into trouble yesterday after camping at the very edge of a 280-foot cliff near Straithes in North Yorkshire.

This car was stopped next to Buckingham Palace last night on our way in from deployment – 3 occupants, all from different households had driven from the midlands to see the sights. They were sent home with FPNs for Covid beaches & one cannabis disposal ?#RoadCrimeTeam #lockdown pic.twitter.com/ylkd1hrpzX

Cops and Coastguard officials raced to the scene – and ordered them to move before anyone got hurt.

Many of those snapped enjoying the weather around the country today are in groups of more than three – which breaks the current lockdown measures.

Since January 4, Brits have not been allowed to leave their home to meet socially with anyone not in their support bubble or household.

Social distancing rules are also set to remain in place for some months to come.

But after months of staying indoors – and a bitterly cold winter – many have taken the opportunity to head outside. 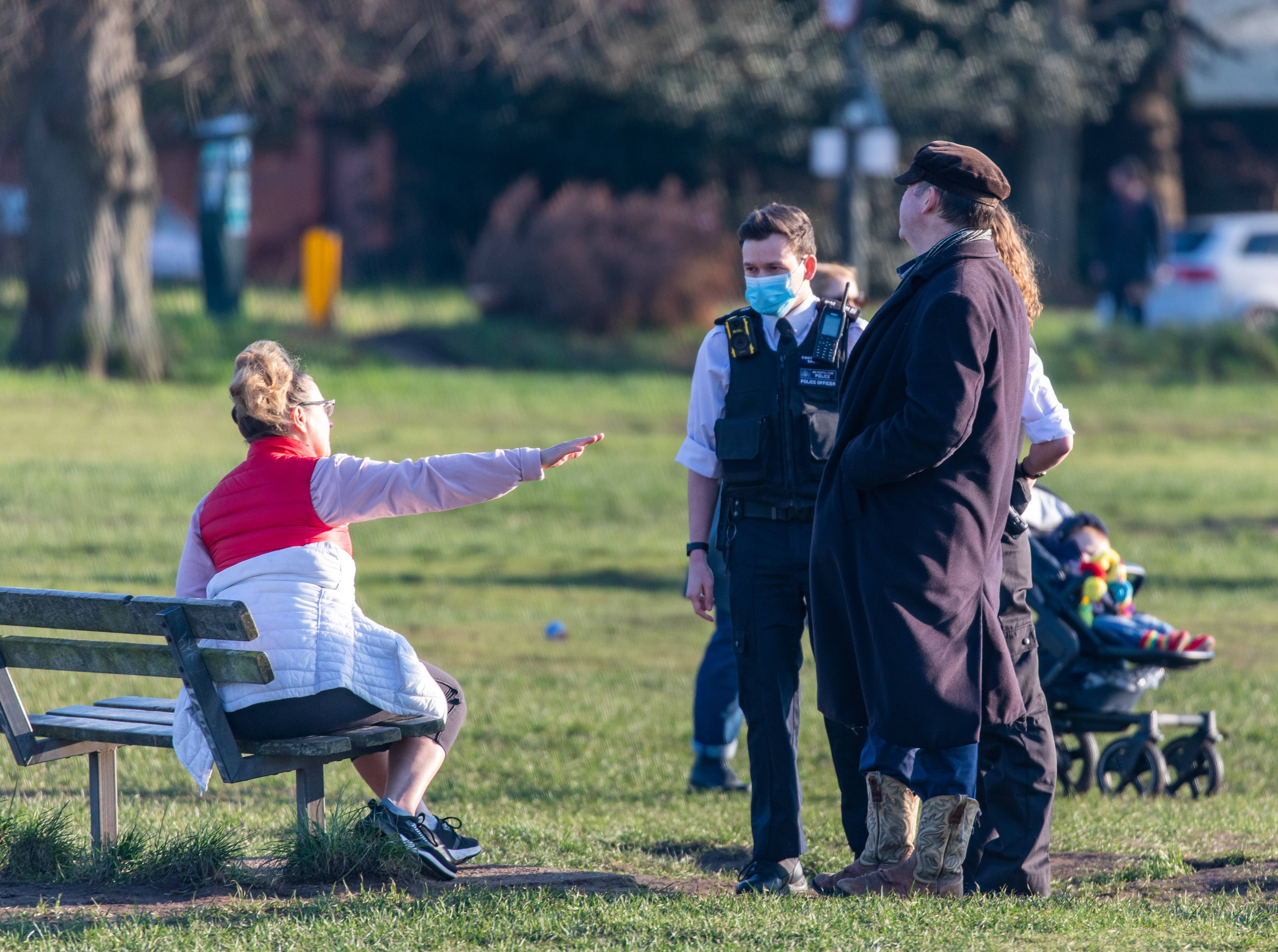 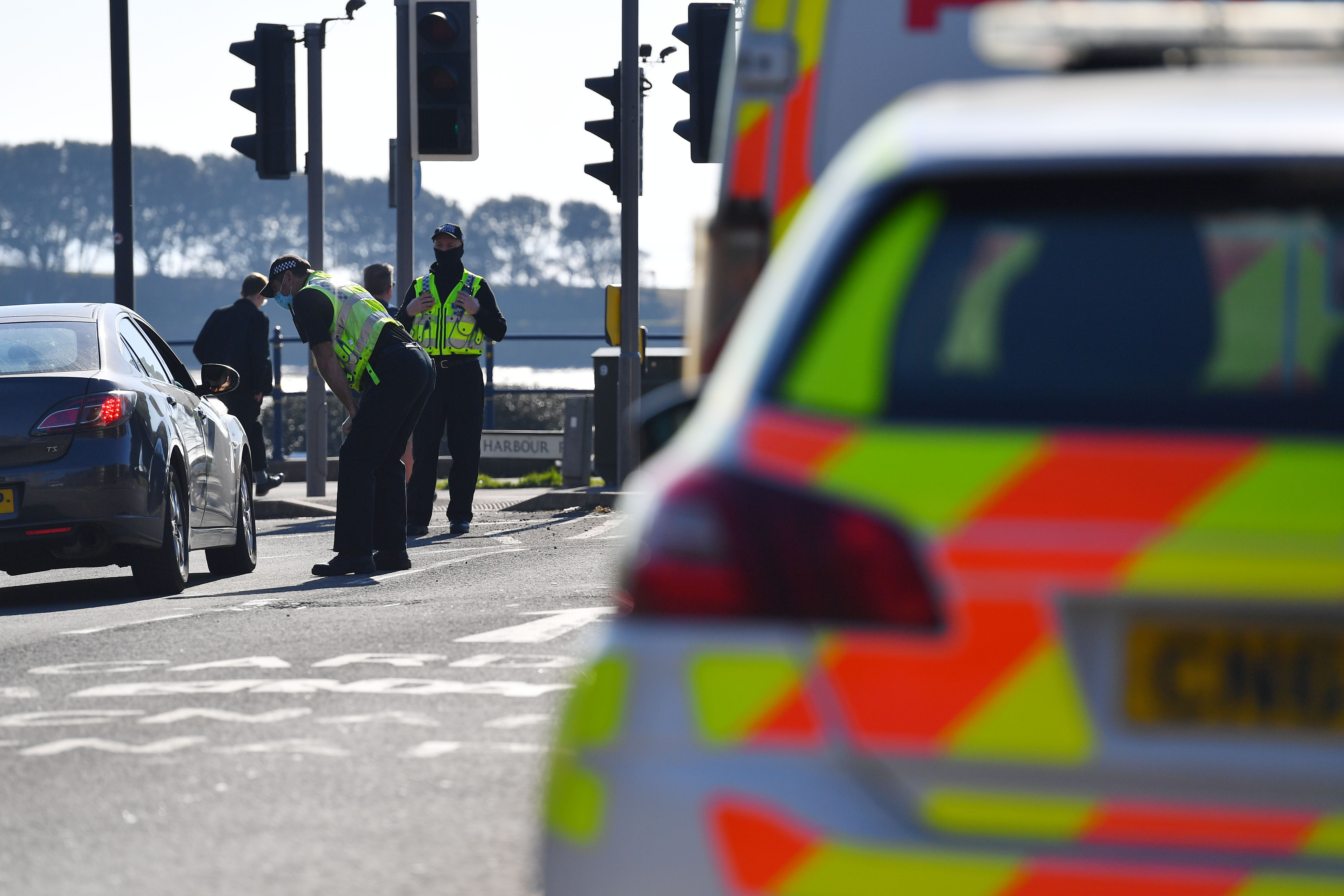 However, with more cold to come, many went out for the weekend anywayCredit: Wales News Service 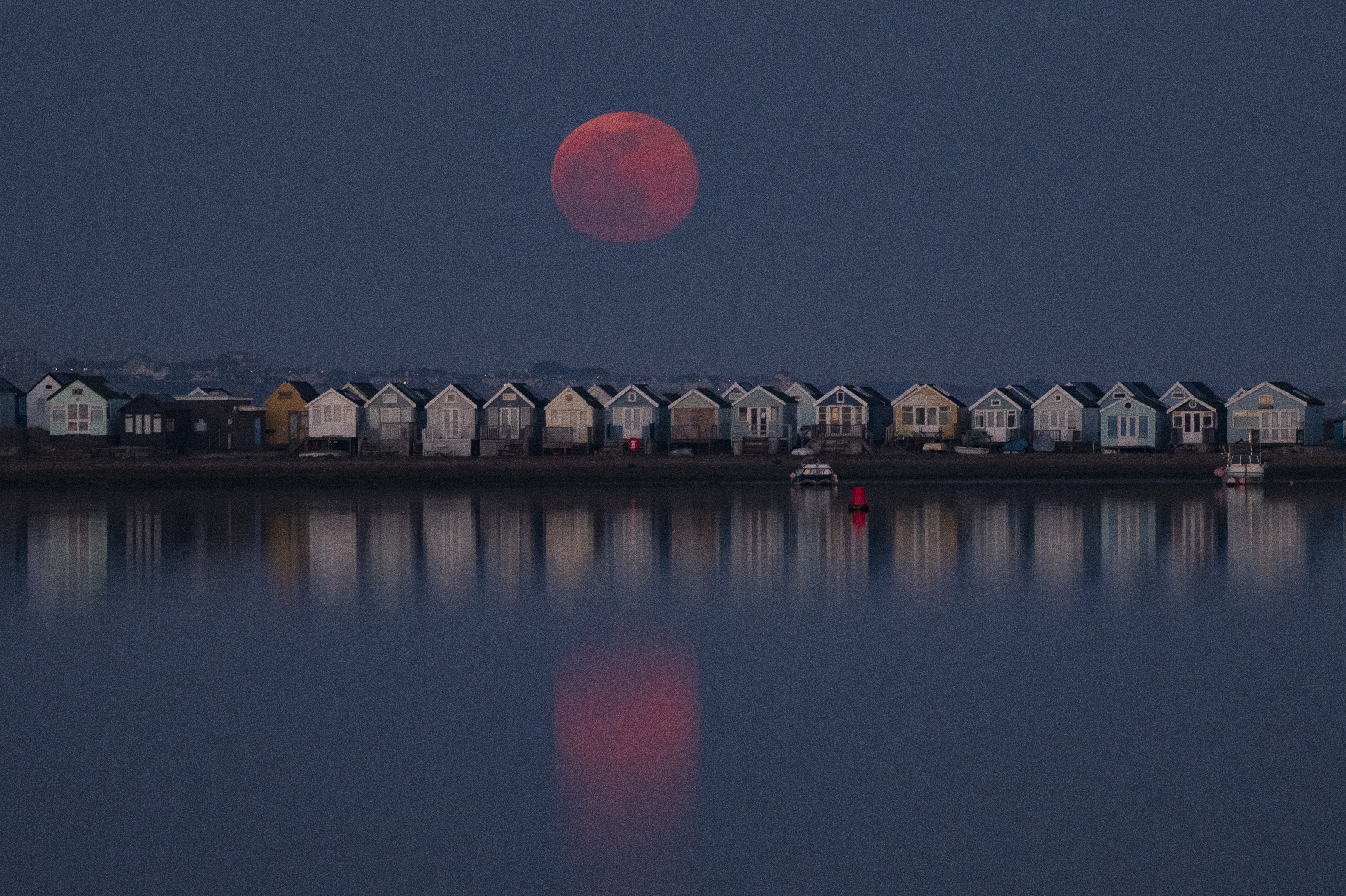 Met Office forecaster Aidan McGivern said: “Winter will go out on a whimper this weekend with conditions very quiet and dry for most.

“For southern parts of the country, it’s looking like a lovely afternoon with plenty of sunny skies after a frosty start to the morning.

“Temperatures won’t be as mild as they have been in the last few days but the mercury will still be above average.

“Most parts of the UK will see temperatures of between 11C and 13C.”

However, the warm weather isn’t set to last long with snow predicted for Easter.

Forecasters say the season still has a sting in its tail, with a Scandanavian blast set to arrive next week.

Weather charts appear to show we’re in for a a 270-mile ‘snow bomb’ after the warm spell.

WX Charts predicts a band of snow – stretching from Norfolk to Dorset – could blanket some areas.

It would mean Birmingham, parts of the West Midlands and Wales, Gloucestershire, parts of Somerset, Bristol and Dorset, could see the white stuff from March 9.

And the wintry weather could continue into April, with the Met Office saying “a white Easter is more likely than a white Christmas”.