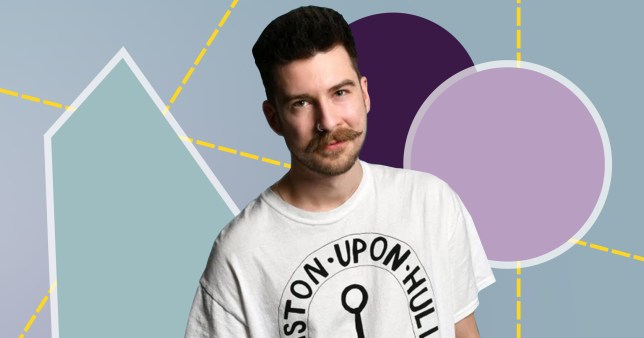 Actor Richard Stott, 33, has Poland syndrome – a rare birth condition that leaves one side of the body underdeveloped.

He’s turned to stand-up comedy to relate his experiences of living with the syndrome and the difficulties of landing acting work with a physical visual difference.

Many people with the condition have an absent or underdeveloped pectoral muscle, breast or nipple, but other symptoms include fused finger bones, a small hand, small or underdeveloped kidney or shortened fingers.

The actual cause of Poland syndrome, which results in developmental changes to foetuses in the womb, isn’t understood fully.

Richard was born with misshapen fingers on his left hand and no left pectoral muscle.

‘As I got older there was no pectoral muscles to help prop my shoulder up so I started to hunch over and look lopsided,’ he says. 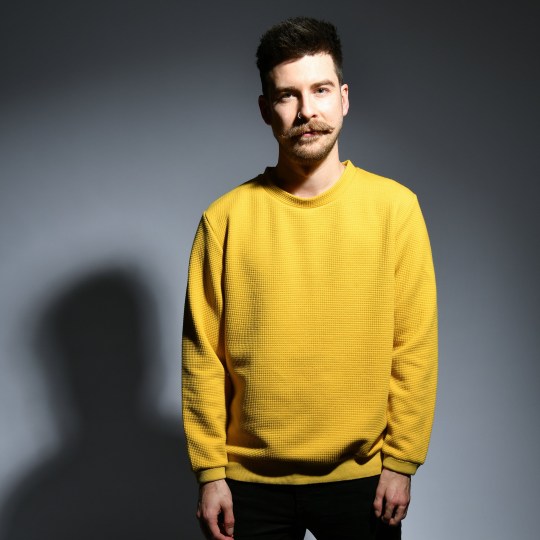 Richard had extensive surgery when he was ten years old to help with the problems with his hand and chest.

First, a piece of muscle was moved from his shoulder blade to his chest.
‘It meant my shoulder was more supported so I could stand up straighter,’ he explains.

What is Poland Syndrome?

Poland syndrome is a very rare condition where a child is born with underdeveloped chest muscles, although sometimes the shoulder, arm and hand can be involved. It usually affects one side of the body.

Other problems can include shorter than usual fingers and problems with the digestive tract.

The cause of the condition (it’s estimated that one in 20,000 babies is born with it) isn’t clear but the most popular theory is that it could be because of a blockage in blood flow when the baby is developing in the womb.

Reconstructive surgery is the most viable option. It involves using existing chest wall muscles (or other muscles as needed) to fill in missing portions.

Surgery can also be used for grafting ribs to move them in the right spot.

The next involved an operation on his left hand – his index and middle finger were amputated. The surgeon then amputated the second biggest toes on each foot and attached them in place of the fingers.

‘The fingers were unusable when I was born. It meant I couldn’t pick up cups or tie my laces as I got older,’ says Richard.

‘The recovery was a long process but the results were good.’ The operation improved function in Richard’s left hand – but there are still some things that cause him problems.

‘I’m not obviously disabled so it’s awkward when someone asks me to do something and I have to explain why I can’t.’

One incident came when he was working in a restaurant after completing his theatre degree.

‘They said I had to carry two plates on my left hand and one on my right. I explained why I couldn’t do that and asked if I could do two on my right instead.

They said, “It’s not how we do things here,” and took me off waiting service – I took orders and made sure the cutlery was polished instead, which meant I didn’t get any tips.’

He talks about life with Poland syndrome in his stand-up show Right Hand Man, currently available online. His condition has made him wonder why he might be missing out on some acting jobs he’s gone for.

How are people with Poland Syndrome affected by the condition?

Sam Fillingham, the chief executive of the Poland syndrome charity PIP UK, talks to Metro about the organisation’s work and the obstacles and challenges they are trying to overcome.

‘We do a lot of work with people in dealing with their visual difference.
They can hide their condition as they don’t want to talk about it, they carry shame about their condition and it can result in body dysmorphia.

‘People have real issues in their adolescence with coming to terms with the missing chest muscle and how it looks. People will even hide it to the extent they start relationships without telling the other person they have Poland syndrome.

‘We’re building a community register of people so we can say definitively how many people in the UK have Poland syndrome, which is currently estimated to be around 2,000, what proportion are male or female and what side of the body is most affected.

‘Then we’ll have the information to make changes in treatment. At the moment there are no specialist doctors for Poland syndrome, there is no common treatment and it’s a very sketchy path to diagnosis. Our latest diagnosis for someone with Poland syndrome is 84 – and that’s someone whose chest and hand were both affected.

‘We’re working with women who are being refused breast implant surgery by the NHS. Some GPs will fob people off and not give them any treatment on the grounds that it’s a ‘cosmetic procedure’.

‘They don’t recognise Poland syndrome as something that needs reconstruction. It’s a very mixed picture across the country.

Visit the website at pip-uk.org for more details on Poland Syndrome

‘I’ve never been self-conscious and I’ve always enjoyed acting. It was a bit of a shock when I left education and my acting training and felt like I was hitting a brick wall,’ says Richard.

‘You’re asked to hold your hands up for the camera at a lot of TV and commercials castings just to see if they look nice.

‘It’s probably perfectly innocent, and I’m just not right for the part when I don’t get the job, but they’ve seen my hands and might have thought, “That looks a bit weird, that might take away from the product we’re selling,”’ says Richard.

He turned to comedy as a means of generating his own work without anyone needing to cast him.

‘It also enabled me to talk about my experiences and I’ve never looked back – audiences aren’t uneasy about watching a disabled comedian. What’s uneasy is constantly showing able- bodied people on stage and screen when there are 14 million disabled people in the UK.

Richard had never spoken about his operations before he did so on stage – and at first he found his stand-up cathartic.

‘But performance isn’t therapy for me – I’m there to entertain people. But if I can make someone in the audience feel better about an insecurity they might have, that’s an extra part of my job done.’