‘I refused to surrender to it in any way’ (Picture: Cancer Research UK)

‘You don’t hear many success stories,’ says Navtej Kaur, ‘but I am one of them.’

Navtej was the first person in her family to be diagnosed with cancer, saying it came ‘out of the blue’ in 2012 when she was in her mid-40s.

It was on a holiday in Spain when she first felt a small lump, deep in her chest.

‘In hindsight, I now realise my body was trying to tell me something months before I had felt anything,’ she recalls. ‘I was unusually fatigued for months to the point of needing to sleep whenever I could. Oddly at the time, my taste buds had switched overnight to craving simple vegetarian food.’

But she pushed it to the back of her mind, suspecting it was nothing but a cyst. Months went by, and she got on with ‘the hectic schedule of a young mum trying to juggle school runs, clubs, tuition, play dates and a professional career in the city.’

It was a chance chat with a colleague whose wife was undergoing chemotherapy at the time that ultimately pushed Navtej to get herself checked out.

‘It’s like that old adage that everyone you meet has a lesson to share if we choose to hear it, she says. Now I know to take careful note of how my body speaks to me.

‘My GP made an immediate referral and I recall she was annoyed I had not come in sooner.’

When her diagnosis was confirmed, Navtej says her ‘pragmatic and logical side’ kicked in, and the shock took a backseat.

‘It’s the armour and defence that most women wear,’ she adds.

‘At my first appointment, talking about the chemo was truly scarier than the diagnosis. The negativity associated with the word chemo is almost pre-conditioned within all of us, but the plan and the prognosis were always positive.’

It was that evening when she saw her two sons, the oldest of whom was just 13, that she ‘had that moment of facing my own mortality.’

‘It’s a lonely place which no one can really protect you from – the isolation and the grieving of all you were and the journey ahead,’ she says.

Navtej, who lives in Hounslow, also had a hard time telling her parents, because, as she puts it; ‘cancer is like a death sentence to the elderly, both frightening and suffocating.’

‘Especially in the Asian community, I’d say, because it’s not something that you would generally heal from, and not associated with the young. Their faces said it would be okay, but their eyes betrayed the devastation.’

But rather than being a fatal sentence, Navtej’s breast cancer diagnosis helped her get closer to her faith and, in doing so, changed her life. 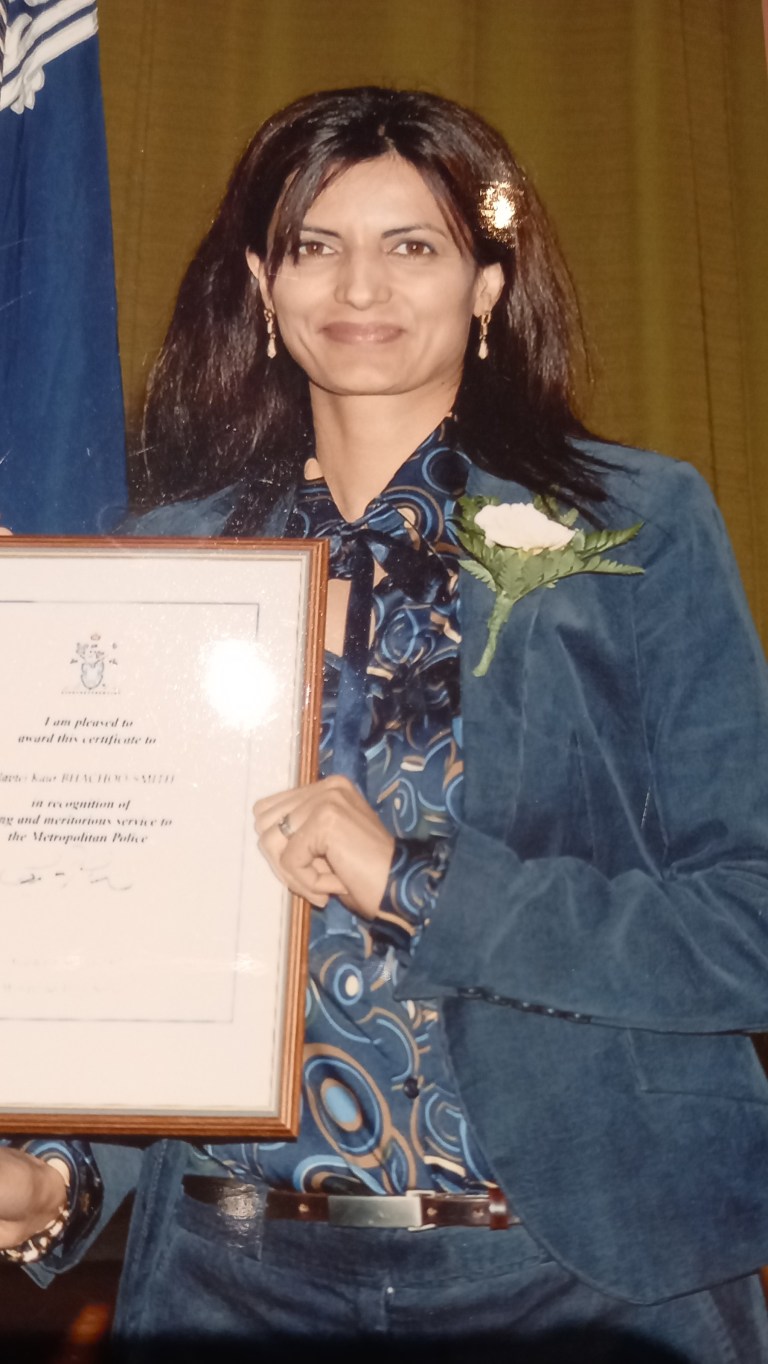 Navtej used to work as a civil servant with the police (Picture: Navtej Kaur)

Navtej, who’s now 56 and originally from Southall, spent 32 years working in the civil service within the Metropolitan Police as a civilian senior manager.

She describes it as a ‘full-on’ role, adding: ‘Before cancer, it had consumed a large part of my life and taken over me. There was no off switch. I’m convinced the stress played its part in the diagnosis.

‘It was all go, and at the same time, the kids were young requiring more attention – the guilt of a working mum is very real indeed’.

‘I’ve never had sick leave in my life, I’m not a sickly person. So after my diagnosis was the first time I actually had to take time off and sit still, and then work out how I’d got to this position and why.’

Navtej says having cancer was a ‘brutal experience’, describing it as something that ‘undoes you completely as a person and causes you to question so much ‘. That being said, she also says her experience with the condition was ‘positive and life-affirming – it has led to my growth and has made me examine my deeper purpose.’

‘I’m really blessed to be able to say that because I was healed however I am very conscious many are not as fortunate,’ she tells us.

‘All the way through, my mindset was, “wow I’m so lucky that it was diagnosed when it was. I’m so lucky to be getting this cutting edge treatment” – because I had been put on a trail for a new drug. 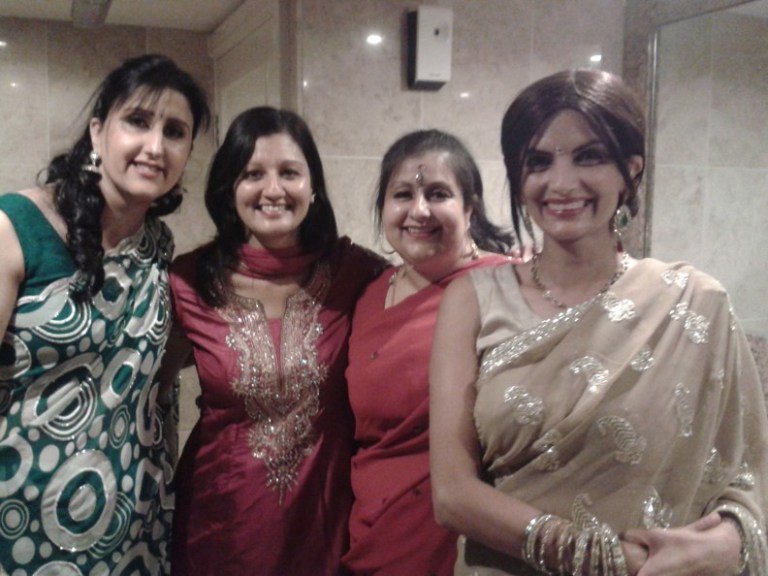 Navtej with friends and family at the end of her chemo in 2013 (Picture: Navtej Kaur)

‘The whole process has changed me and brought me closer to my faith. I’m very much more immersed in studying my faith, craving the knowledge that lies in my scriptures and indeed all religions. It has changed my mindset and priorities.

‘I had breast cancer and as a woman it totally undoes you, but then it builds you to be much stronger and more resilient. If you allow it to, it can build you into a stronger person. And I did – I allowed it to actually be the strength rather than the weakness in my life.

‘I refused to surrender to it in any way.’

Navtej, who’s married to a retired Detective Chief Inspector, credits her upbringing and her faith for this positive mindset, saying that there’s ‘a lot of strength’ in the Sikh religion.

‘In order to get through it, I really pulled upon my religion,’ she explains. ‘And then my inquisitive mind led me to find out more about exactly what the scriptures say.’

‘I think if I didn’t have my faith,’ she adds, ‘I wouldn’t have dealt with my prognosis in such a positive way.’

By the time she was able to go back to work, Navtej found it hard – her illness had changed her.

Where she had previously thrived, relishing her ability to operate in a continuously changing business environment, she found herself not enjoying the role and questioning her purpose in life.

‘I was in a more spiritual and intuitive space,’ she says. ‘I suppose I was more about taking care of people.’

So, when a big restructuring at the organisation came along, Navtej accepted redundancy. 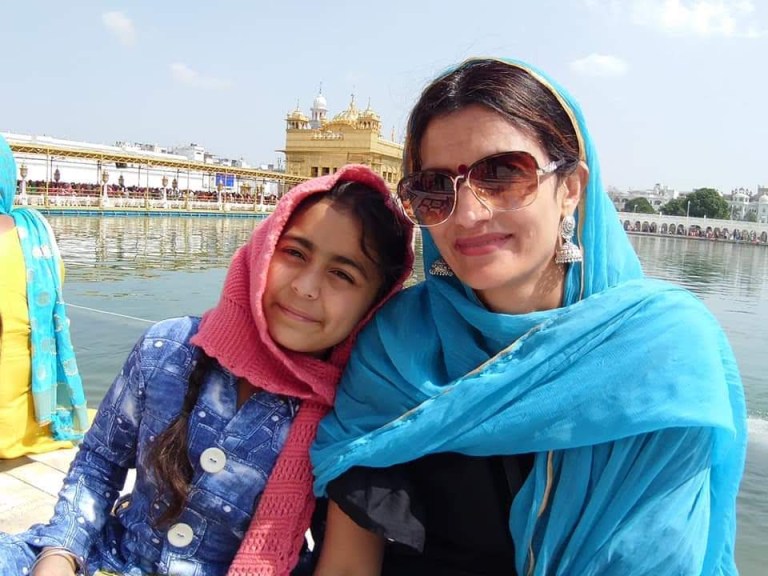 Navtej on a Trip to Golden Temple in India in 2019 (Picture: Navtej Kaur)

Since then, she’s been doing some project work, largely for charities, she’s volunteered at homelessness charity St Mungo’s, has become the trustee of another local charity dealing with addiction in the Sikh community, and is working with her local and childhood Gudwaras to address issues of social isolation and mental health within the Sikh community.

She also trained as a Sikh chaplain, and now volunteers within the NHS because she wants to support people like her.

‘Chaplaincy isn’t just about religion,’ she explains. ‘It’s about spiritual, pastoral care for an individual, regardless of faith’

‘I can go, I can sit with them and just hold that space and maybe offer a different way of looking at [their diagnosis],’ she adds.

‘I don’t know if I help or not, but it’s something I feel I need to do just to pay back the healing that I got.’

The nature of this role involves helping many people at the end of their life, something which Navtej says is ‘humbling and incredibly moving’.

‘A lot of people have no faith whatsoever,’ she tells us, ‘but they are facing the end of their life and that’s a spiritual time in itself.

‘I think the closure of your life is as important as how you lived it.’ 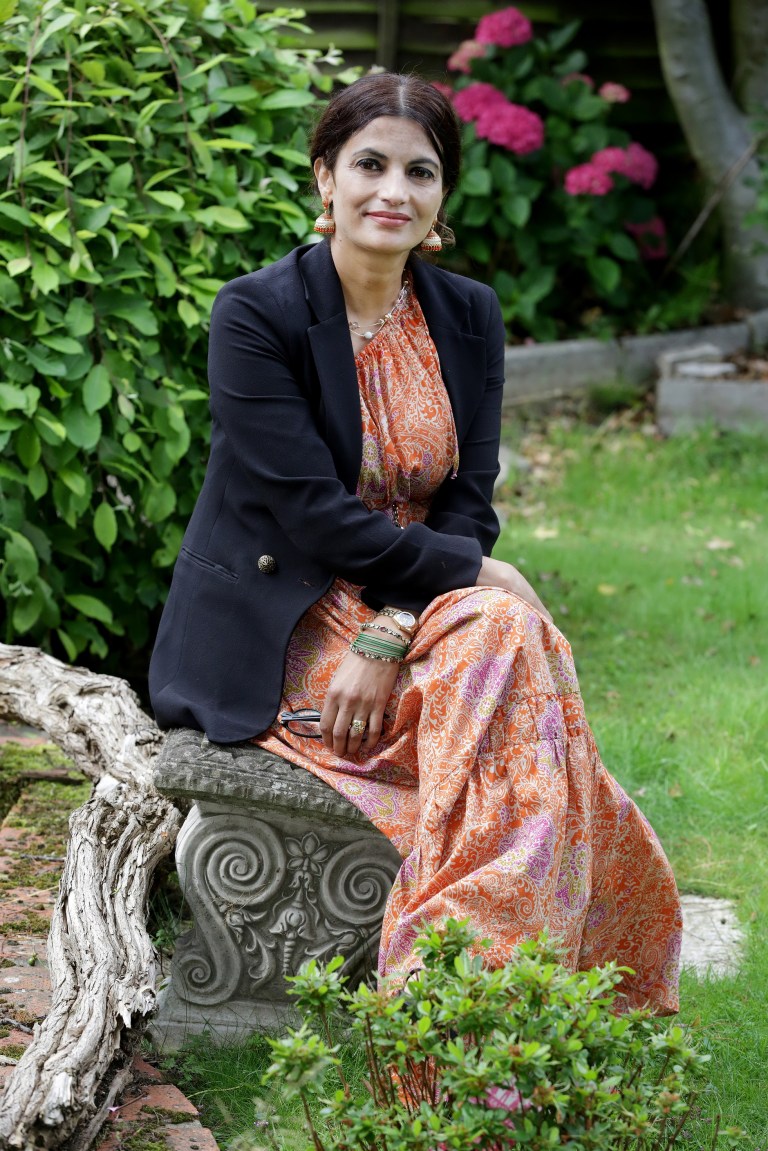 Navtej finds it hard to try to convey to people the complexity of considering cancer an extremely difficult but ultimately enriching experience for her.

‘What I try to focus on is the fact that it has brought me closer to my religion,’ she explains.

She’s also wary of sounding ‘condescending’, and says she’s aware that cancer isn’t a positive story for everyone.

During her treatment, she made friends along the way who are no longer with us, so she knows what it’s like to lose people to the disease.

But she wants to remind people that cancer is something you can recover from.

‘When you get something like this, it is your mindset that helps you through the journey,’ she explains.

Now, Navtej hopes to be able to help people when they have just been diagnosed, which is a time she considers very important on their road ahead.

‘People are so vulnerable when they’ve just been told,’ she explains.

‘If that moment can be harnessed in a positive way, it will translate into how the cancer journey goes for them.

‘So if I can capture people at the beginning of being told they’ve got cancer and just say, “it’s not a death sentence,” and bring into it some of my learning, that’s what I would love to do.’

Mum-of-three tries to ‘normalise’ not cleaning her toilet for a MONTH, but trolls demand she ‘do to better for the kids’