A TEEN boy was put in isolation on his first day back at school after his mum cut his hair too short.

Lealan Hague, 13, was just 45 minutes into lessons after months of lockdown when he was marched out of class. 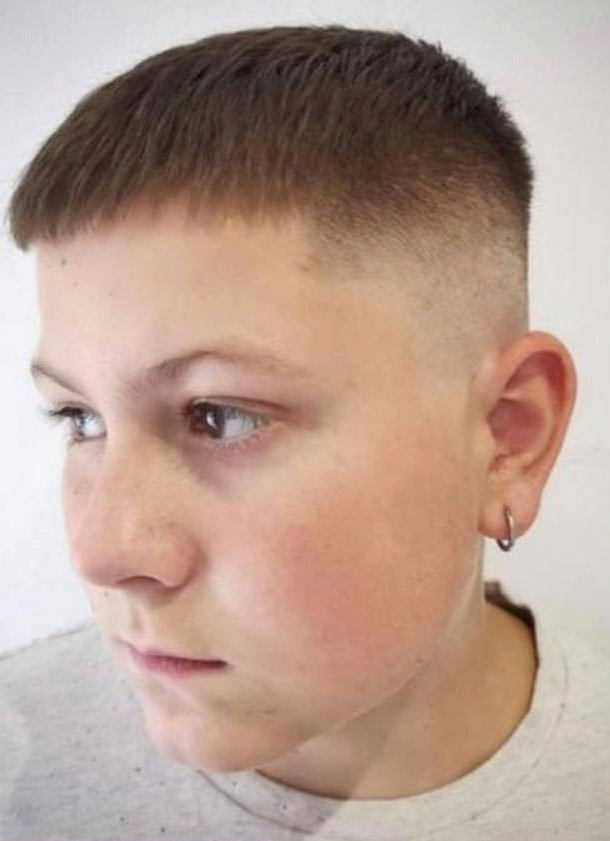 Lealan was told his hair was too short when he returned to schoolCredit: SWNS:South West News Service

His mum had cut the barnet using a broken pair of clippersCredit: SWNS:South West News Service

The teenager was told his hair was “too extreme and too short” by staff at Exmouth Community College in Devon.

His mum Kirsty has now slammed the school after claiming she was forced to chop her son’s mane using a broken pair of clippers as hairdressers are still closed.

The 35-year-old said: “Apparently the college’s policy is you’re not allowed below a grade two, they’ve never given me a reason for it.

“My son has always had a grade zero shaved head. He had a mohawk and the sides were shaved.

“He cut that off when he went to the college because it’s against the rules. He’d had it for about seven years.

“He hated having it cut off, it was part of him – it’s like taking part of his identity away.

“In a way it’s stripping the children of their personality, I don’t dictate to him what haircut he has at home so why should the school?”

‘I’M NOT A HAIRDRESSER’

The business owner was forced to take matters into her own hands after it was announced schools would be reopening on March 8 as part of Boris Johnson’s roadmap out of lockdown.

Kirsty said she could only shave Lealan’s hair at a grade zero leaving it long on top because of the broken clippers.

She added: “I could understand if it was lots of shaved lines and bits of pieces, or coloured green, but it’s just a hair cut.

“I run a driving school, I’m not a hairdresser, and I was using broken equipment – there was nothing I can do.

“What would have happened if I sent him in with long hair, would he have been singled him out then?

“Lealan is an easy going child and he takes it in his stride, he wants it cut short but he’s not allowed. He’s accepting it because he has to.”

The school confirmed Lealan was later allowed to return to lessons after his mum explained the issues she had.

Andrew Davis, principal at Exmouth Community College, said: “As you would expect, the college has high standards around the appearance of our students.

“This includes the appropriate wearing of uniform, jewellery and haircuts.

“During lockdown we are aware that some students find it difficult to have an appropriate haircut and so we have modified our normal standards to accommodate such issues.

“In this particular case, it was a very extreme haircut and so we did provide alternative onsite learning while we investigated the circumstances.

“Within a short space of time those circumstances were explained to us and the student was allowed to return to his lessons as normal and no further action will be taken.”

It comes after a school forced a 15-year-old student to isolate on his first day back over his two-tone hairstyle – even though salons aren’t open to fix it.

Jacob Lee-Stokes had just returned to Humberston Academy in Grimsby after months learning from home when teachers swooped.

Schools returned on Monday for the first time since January as Britain begins to get back to normal.

The Department for Education (DfE) has advised teachers to “wear face coverings indoors, including classrooms, where social distancing cannot be maintained”.

Staff and students at secondary schools and colleges are advised to wear face coverings in all areas, including classrooms where social distancing can’t be maintained.

School forces pupil, 15, to isolate on first day back over two-tone hairstyle despite no salons being open to fix it

What does stay local mean in Wales?