It was a total whirlwind as I prepared for my first born’s arrival in the run-up to Christmas 2017 – but my pregnancy gave no warning of what was to come.

I had some morning sickness in the first trimester – nothing out of the ordinary. From then on it was a smooth process right through to Amelia’s birth that November: natural, with no complications.

I think sheer exhaustion meant that I didn’t think too much at first about the clusters of large raised purple spots dotted across her body.”

The doctors told my partner Igor and I that the spots could be birthmarks, a problem with her liver or what’s known as ‘blueberry muffin syndrome’ – which could be linked to leukaemia.

Tests ruled out issues with Amelia’s liver – and there were too many spots to be birthmarks. Which left only one devastatingly rare answer: my precious baby had blood cancer.

Igor and I were in so much shock that we didn’t know what to say to each other. The next few days were a blur of hospital transfers, tests and tears. 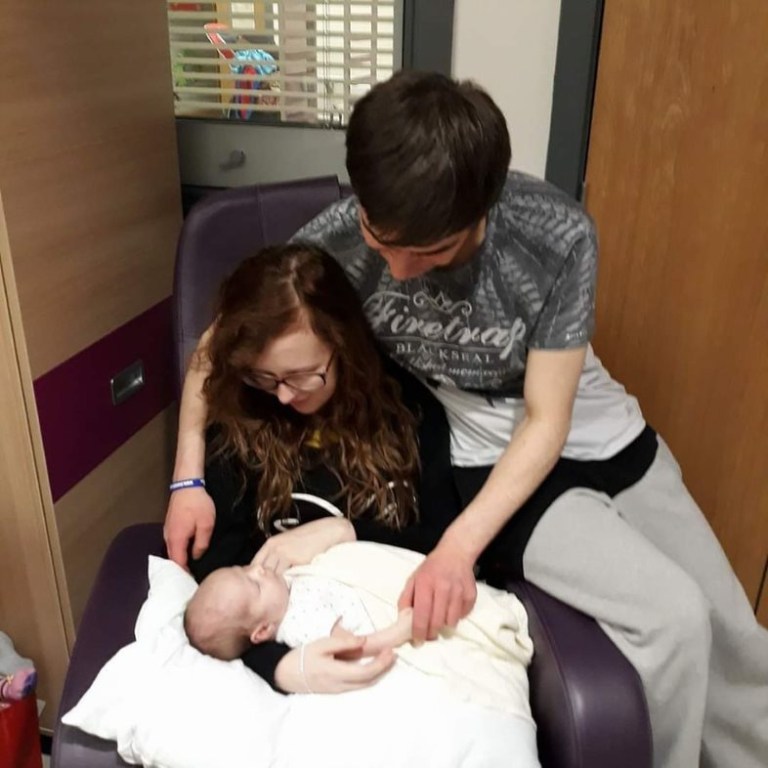 It may sound naive but, back then, I didn’t know that babies could be born with cancer – it seemed so cruel. She hadn’t even started life, yet she faced a huge fight to survive.

We were transferred to Royal Aberdeen Children’s Hospital by the next evening where the diagnosis was confirmed. Amelia had two types of leukaemia, acute lymphoblastic (ALL) and acute myeloid (AML).

It was only after I left the consultation room that it really hit me. I broke down in inconsolable sobs.

We were transferred to the Queen Elizabeth University Hospital in Glasgow the following day. Amelia spent her first Christmas there, undergoing the first of four rounds of chemotherapy.

Watching her go through six months of treatment was heart-rending. At times you could physically see it making her sick – she’d be tired, moody, she’d vomit and her newly-grown hair fell out.

ALL and AML both affect white blood cells, which fight infection yet can cause an extremely weakened immune system. The cruel twist is that regular chemotherapy does the same. Therefore, minimising the risk of Amelia getting ill was vital.

She couldn’t go near any other children or even outside much for fresh air. Such normal things that other families take for granted. I’d get upset sometimes when I saw children playing in parks near the hospital.

It was hard to talk to friends at this time, too, as we were so separated from everything. It’s hard for those who haven’t experienced an infant cancer diagnosis to even know how to begin talking about it. That’s no one’s fault. I can understand that people just don’t want to contemplate it.

But Igor, Amelia and I were in our own little bubble and I was determined to keep her safe.

The nurses and auxiliaries delivering Amelia’s treatment were amazing, and it was other parents on the ward who became our extended family.

We’d laugh together and all too often cry together. We were all there for each other. Even now, though we’re all in different places, we remain in touch, leaning on one another for emotional support. 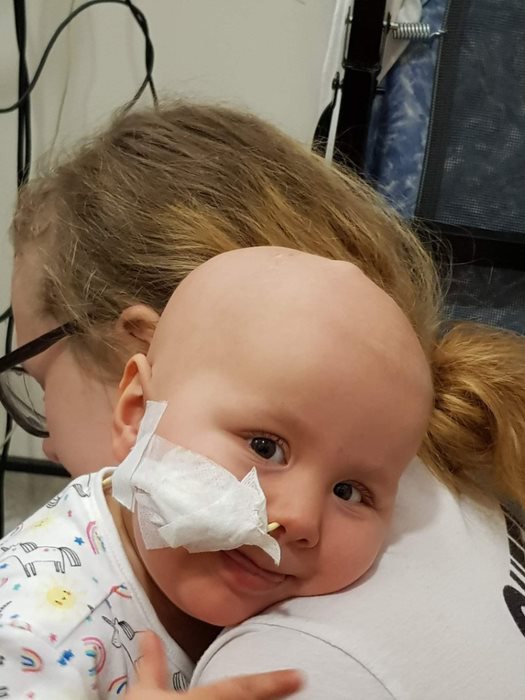 Although major improvements have been made in survival for children with leukaemia, it can come back (Picture: Cancer Research UK)

Following the chemo, in spring 2018, consultants told us that Amelia’s best chance of survival was a stem cell transplant, taken from a donor’s bone marrow.

Within weeks a match was found from a man aged between 16 and 30. That’s all we knew. The transplant went ahead that June and was a success, much to our relief.

Amelia recovered well and by that Autumn she was well enough to come home. It was the best feeling – we had wanted to get back to our own space as a family for so long.

It felt amazing not to have a room full of doctors, or have to ask permission if we could go for a walk.

At last we got to live as every young parents should – we introduced her to friends and family, and watched her own little personality beginning to form. She always seemed so happy and cheerful despite all that she had been through.

Returning home was also much needed as, eight weeks later, I gave birth to Amelia’s brother Oscar. It had been a real shock when I got pregnant again – Amelia was only three months when we found out.

Igor and I were elated when Oscar was born. We dared to hope we could settle into an ordinary life again, although Amelia was not interested in her baby brother at first – she looked at him and walked away. (I’m happy to say that she’s since become a doting big sister!)

We finally started to look ahead. But child cancer can be so complicated. Although major improvements have been made in survival for children with leukaemia, it can come back – and when it does, treatment options are limited.

Sadly, that is what happened with Amelia in February 2019. Back in hospital, we had to bring Oscar, then four months old, along too.

Consultants told us that the best chance we had would be to do a second stem cell transplant. This time the match came from the blood from a newborn baby’s umbilical cord, flown over from America.

I remember looking at the tiny bag it came in and being awestruck. It didn’t seem possible, but I was so grateful to that US family.

A month after the transplant, they did blood counts which showed it had been a success and Amelia entered remission again. 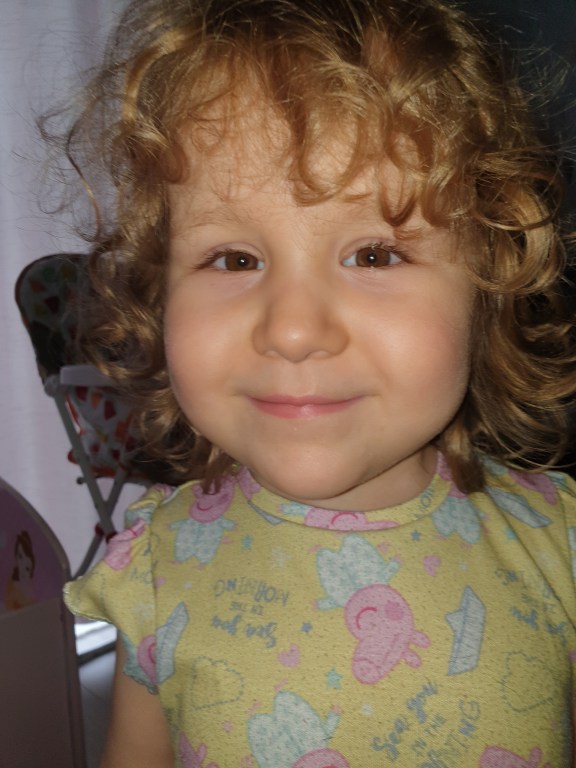 I remember every day how Amelia is one of the lucky ones (Picture: Kerri Paton)

Amelia’s cancer has had a lasting impact on us all. That’s the bittersweet pill. She’s having language development therapy to make up for what she missed while in hospital, and they’re monitoring her growth and weight.

Earlier this year, Amelia, now three, started nursery. On the first day, she ran straight in and didn’t even say bye.

I remember every day how Amelia is one of the lucky ones, and often think of the children that were lost.

Yet, we still live with constant dread every time she gets ill – what if this is it again?

This Childhood Cancer Awareness Month I am working with Cancer Research UK for Children & Young People to share our story, in hopes that it will highlight the importance of research they support to help more children like Amelia survive, and have a good quality of life.

I live for the day when babies like Amelia can receive less toxic treatments, so they don’t grow up with long-term side effects or are kept away from social contact when they need it most.

I don’t want to scare anyone. Blood cancer in babies is very rare but still, around 275 children aged 0-4 are diagnosed with leukaemia every year in the UK. I want to help other parents who might be going through the toughest time right now – or in the future.

There’s still such a need to improve the treatment options that are made available – and it’s important that parents are aware and supported like we were when the worst happens.

I’m doing this because no-one, not even our precious little ones, is immune to cancer.

Kerri is supporting Cancer Research UK for Children & Young People, in partnership with TK Maxx, this Childhood Cancer Awareness Month. To find out more about their work to improve outcomes for children and young people with cancer click here.

Metro.co.uk’s weekly The Truth Is… series seeks to explore anything and everything when it comes to life’s unspoken truths and long-held secrets. Contributors will challenge popular misconceptions on a topic close to their hearts, confess to a deeply personal secret, or reveal their wisdom from experience – good and bad – when it comes to romance or family relationships.

How to Build Ideal Partner Personas for Channel Marketing