ANTI-lockdown protesters clashed with cops in London today after police warned them they could be arrested if they gathered.

Hundreds of maskless demonstrators took to Hyde Park to rally against Covid rules, just hours after the Met urged people not to join. 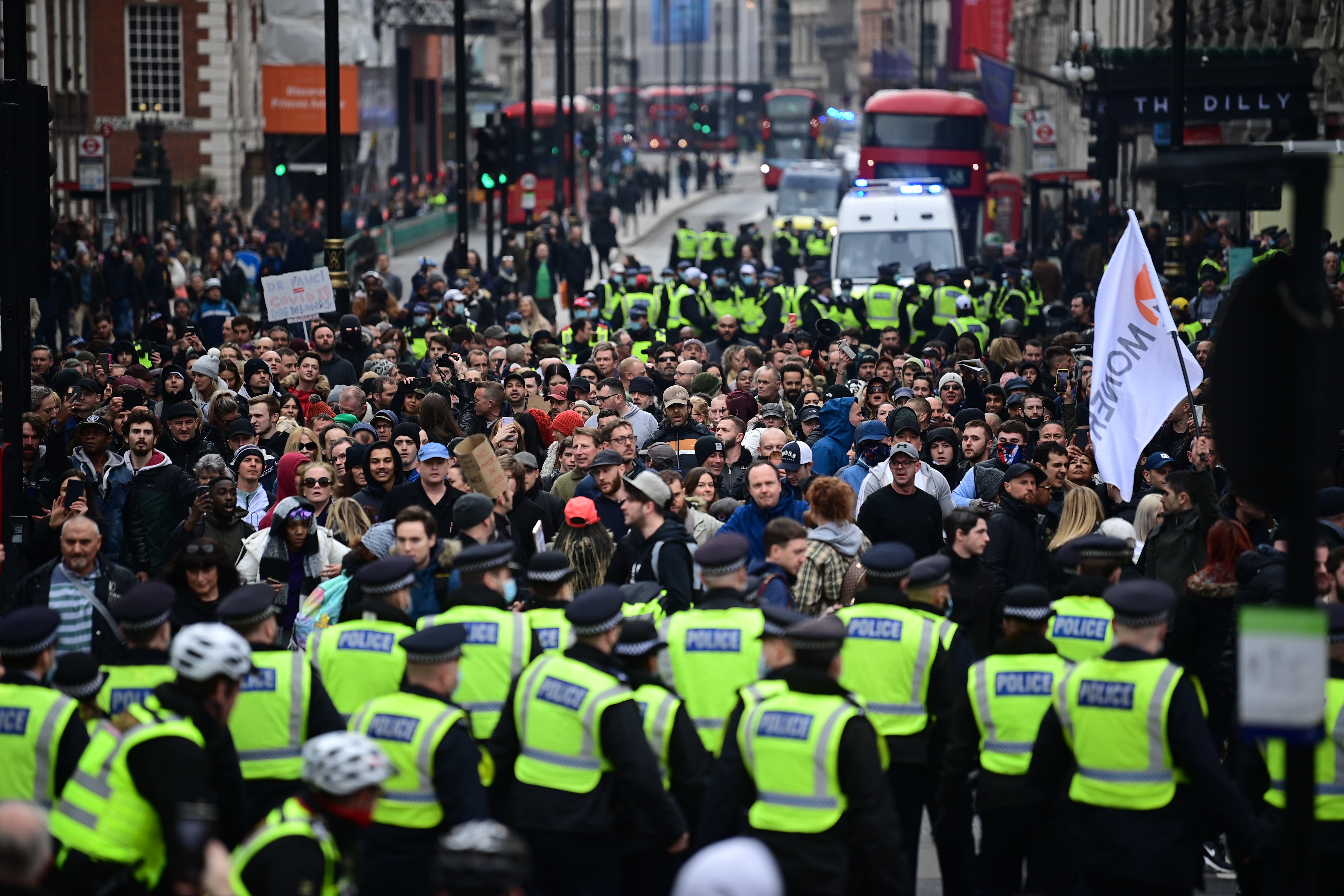 Hundreds faced cops in the centre of LondonCredit: LNP

Officers detained one protester on the groundCredit: Reuters 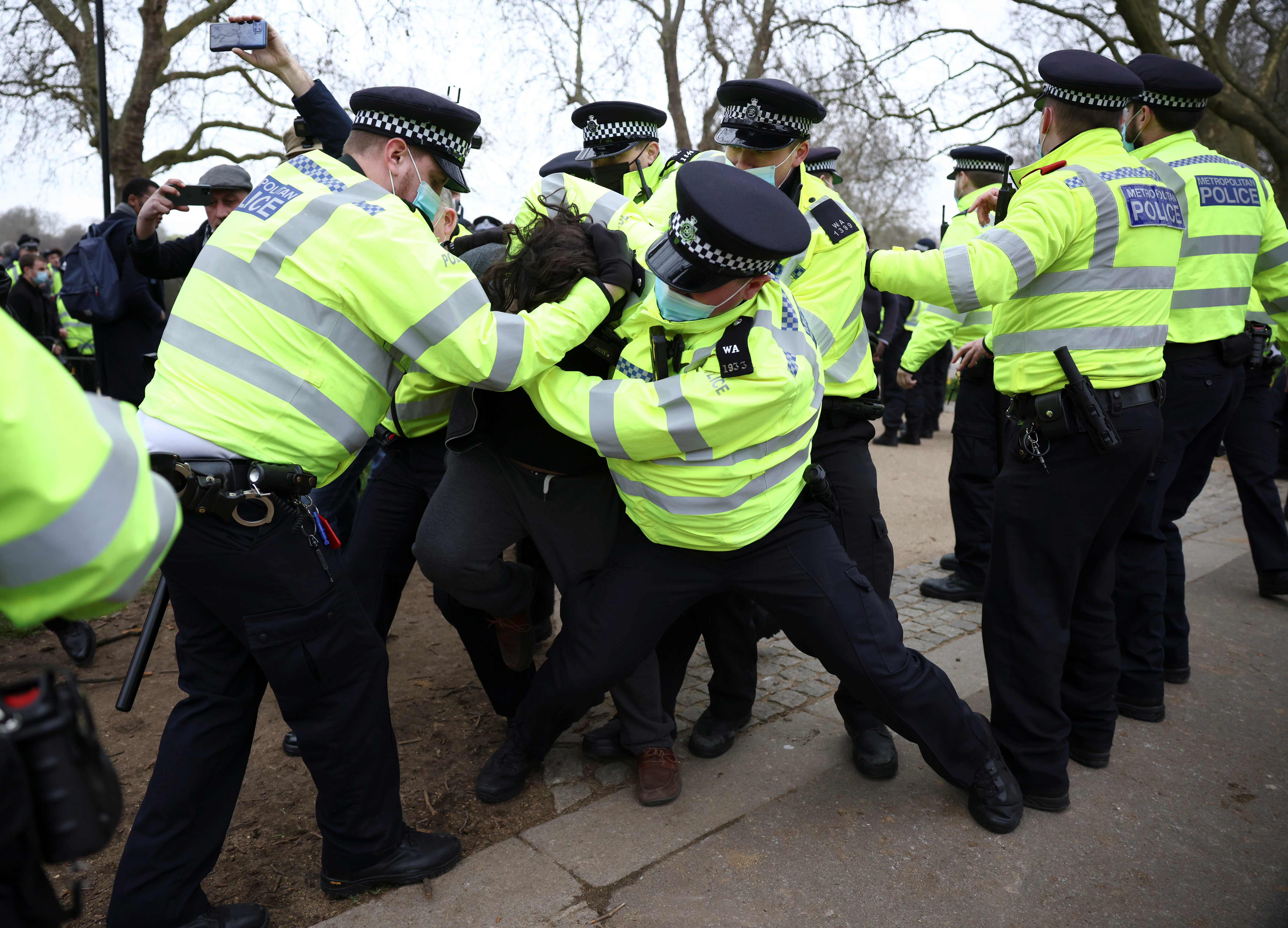 Cops tussled with one protester as they tried to remove them from the crowdCredit: Reuters

Police officers detain a demonstrator in Hyde Park during a protest against the lockdownCredit: Reuters

One demonstrator mocked the restrictions in a hazmat suit and gas mask as cops escorted him from the crowd.

Another was led by officers into the back of a police van as Jeremy Corbyn’s brother Piers Corbyn addressed the masses on a megaphone.

Several demonstrators held a banner which read “stop destroying our kids’ lives” as others let off flares.

The demonstration marks the one-year anniversary of the first lockdown, with Brits told to stay at home for the first time on March 23 last year.

It comes as the nation eases itself out of the third shutdown, with measures next set to relax from March 29.

And police yesterday urged people not to protest, warning a “significant policing operation” would be in place to deal with flouters.

A statement from the Met read: “Those gathering will be encouraged to return home, if they do not, they face necessary and proportionate enforcement action.

“This could be a fixed penalty notice, or arrest.” 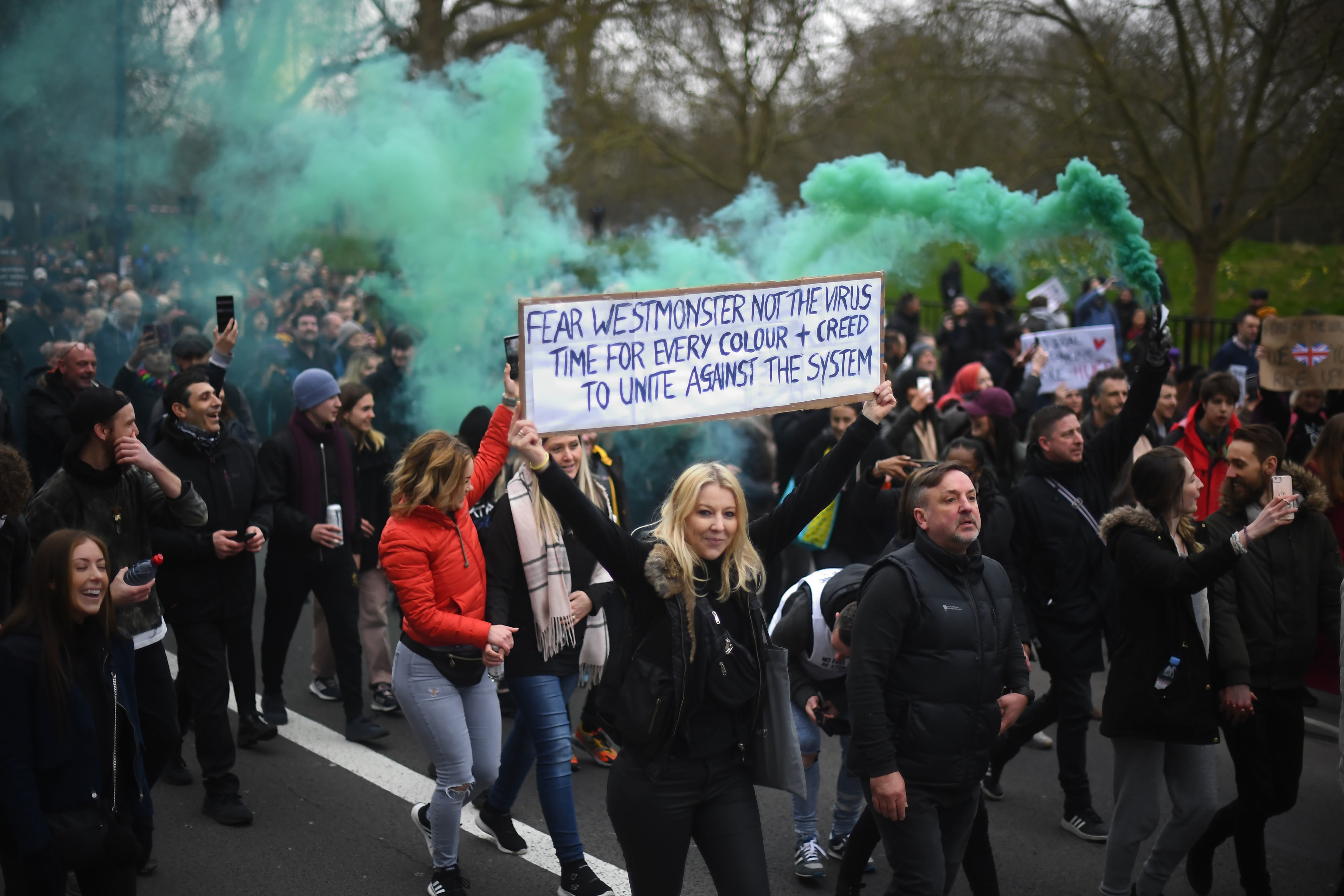 One woman held a placard which read ‘fear Westmonster not the virus’ as a green flare billowed in the crowdCredit: PA 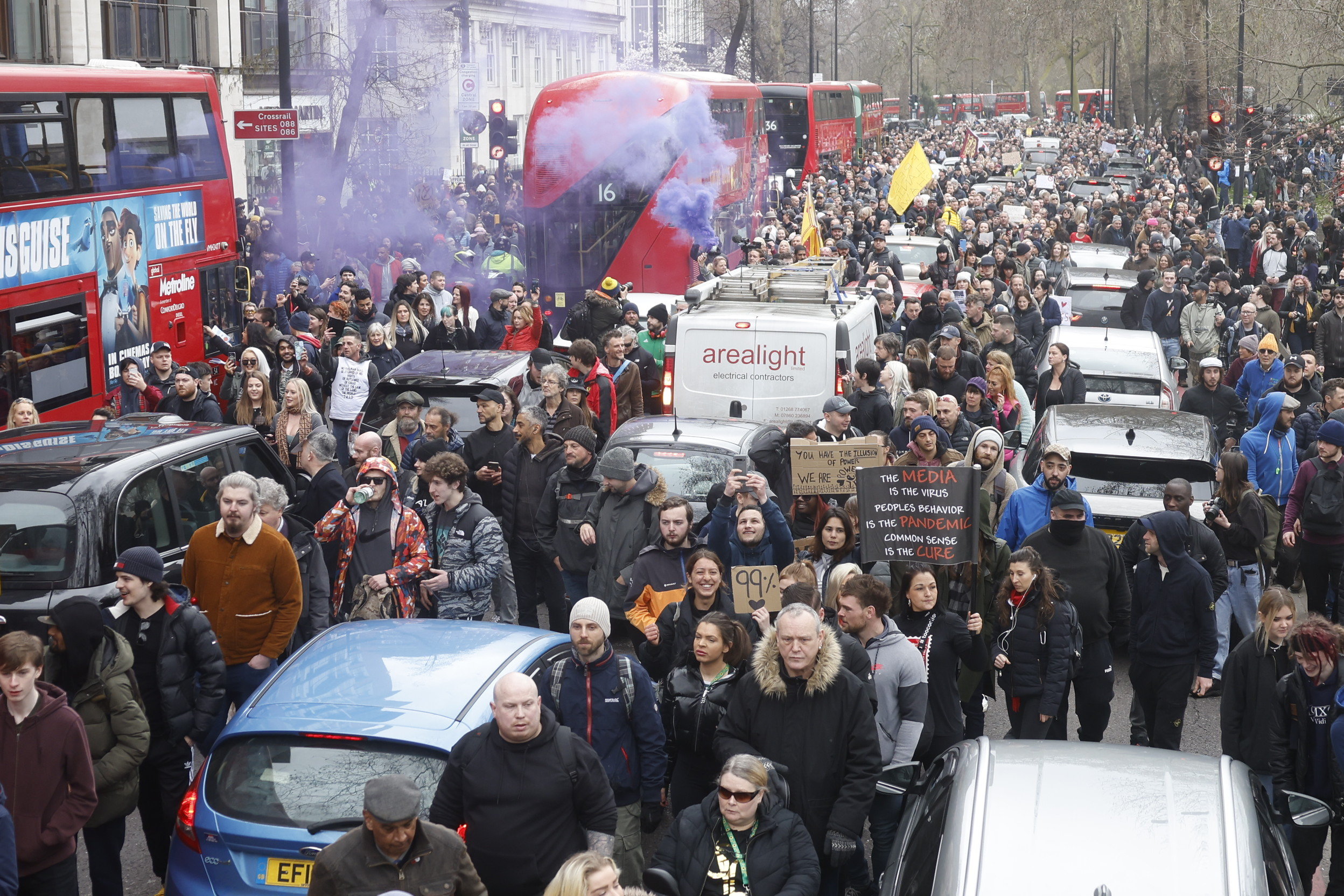 Cops removed a man wearing a mock hazmat suit from the rallyCredit: LNP 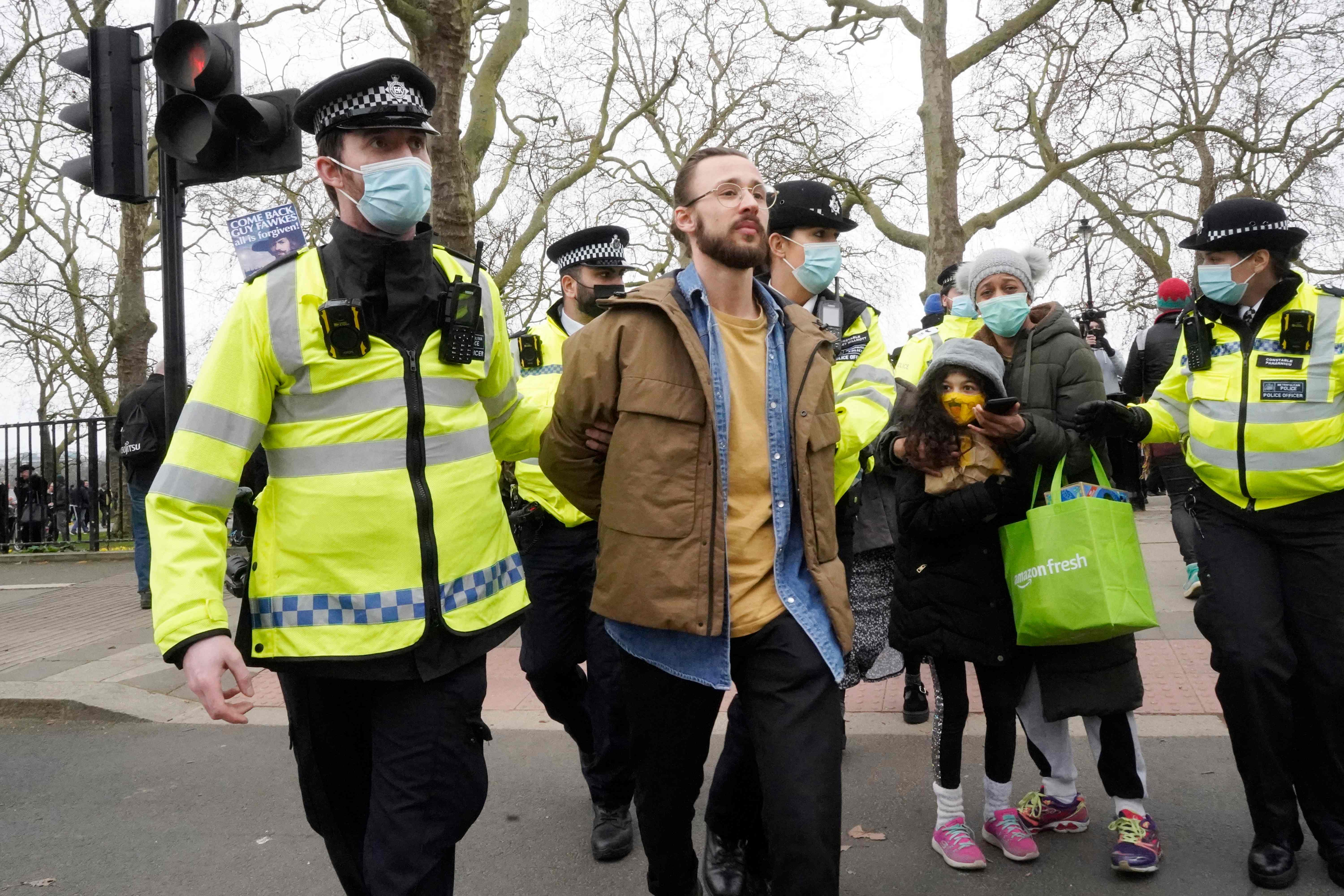 This man was taken away by officersCredit: AFP

Flares were let off in the crowdCredit: Reuters 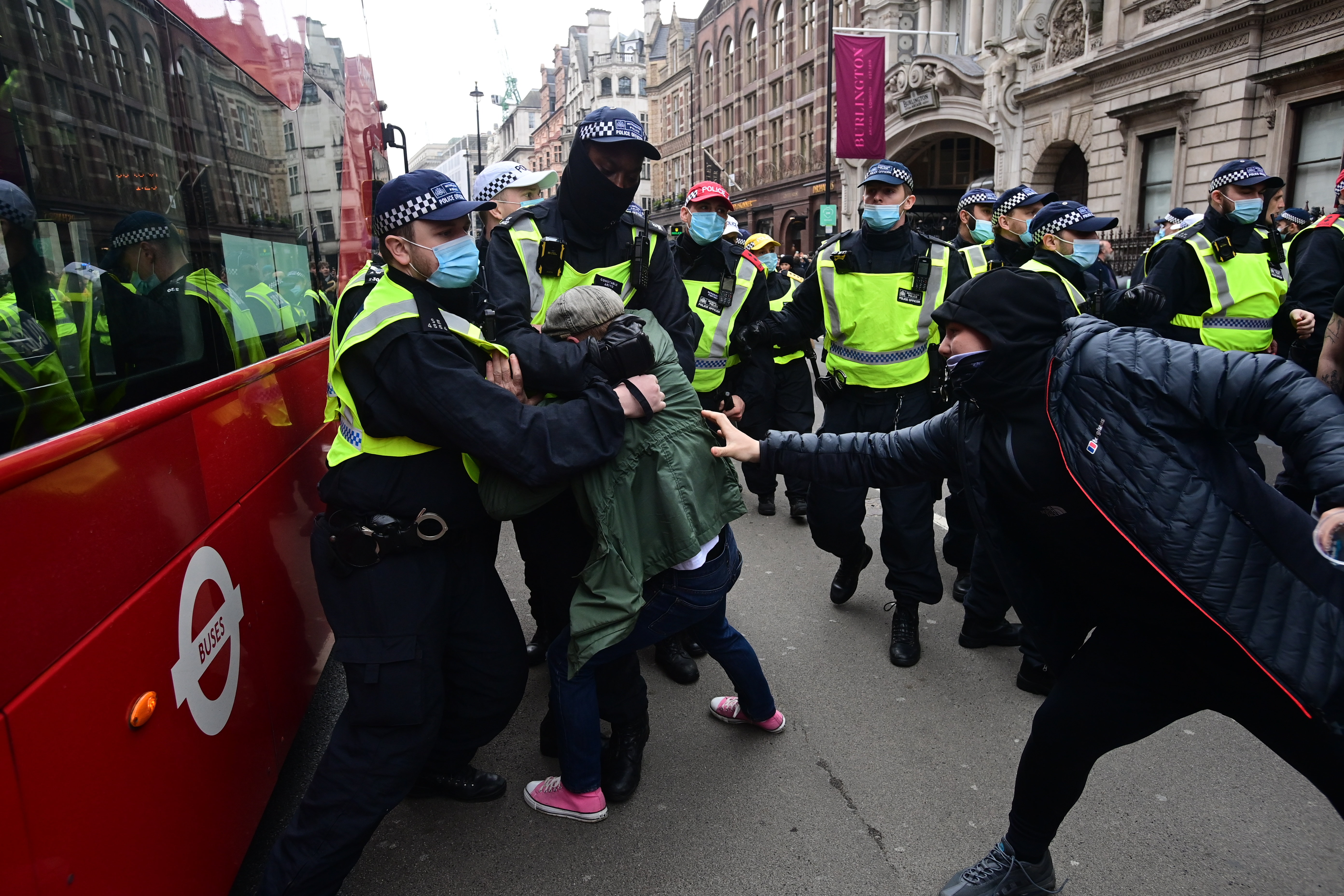 Police clash with protesters on Piccadilly during the ‘Rally for Freedom’Credit: LNP 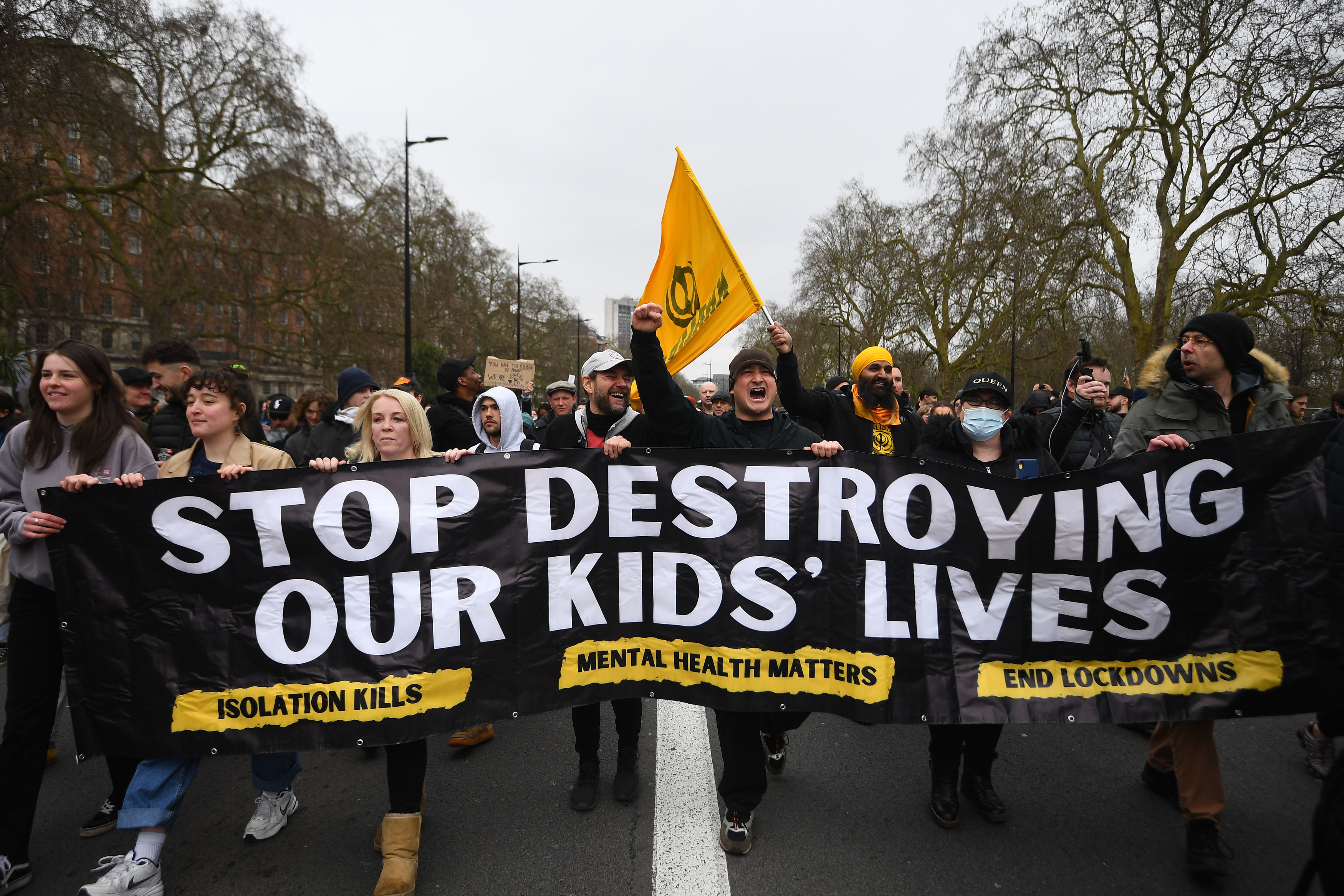 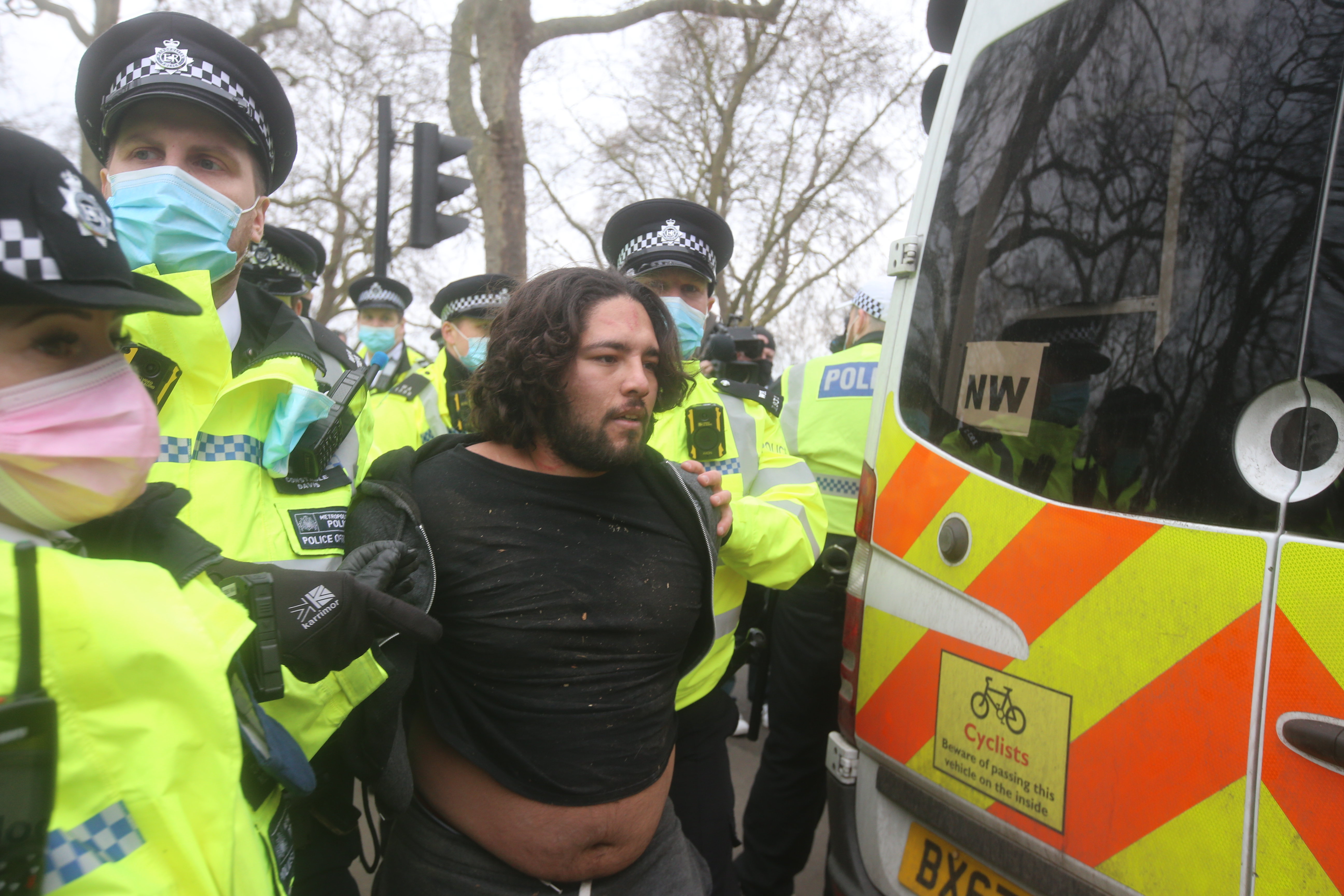 Another man was taken into the back of a police vanCredit: i-Images 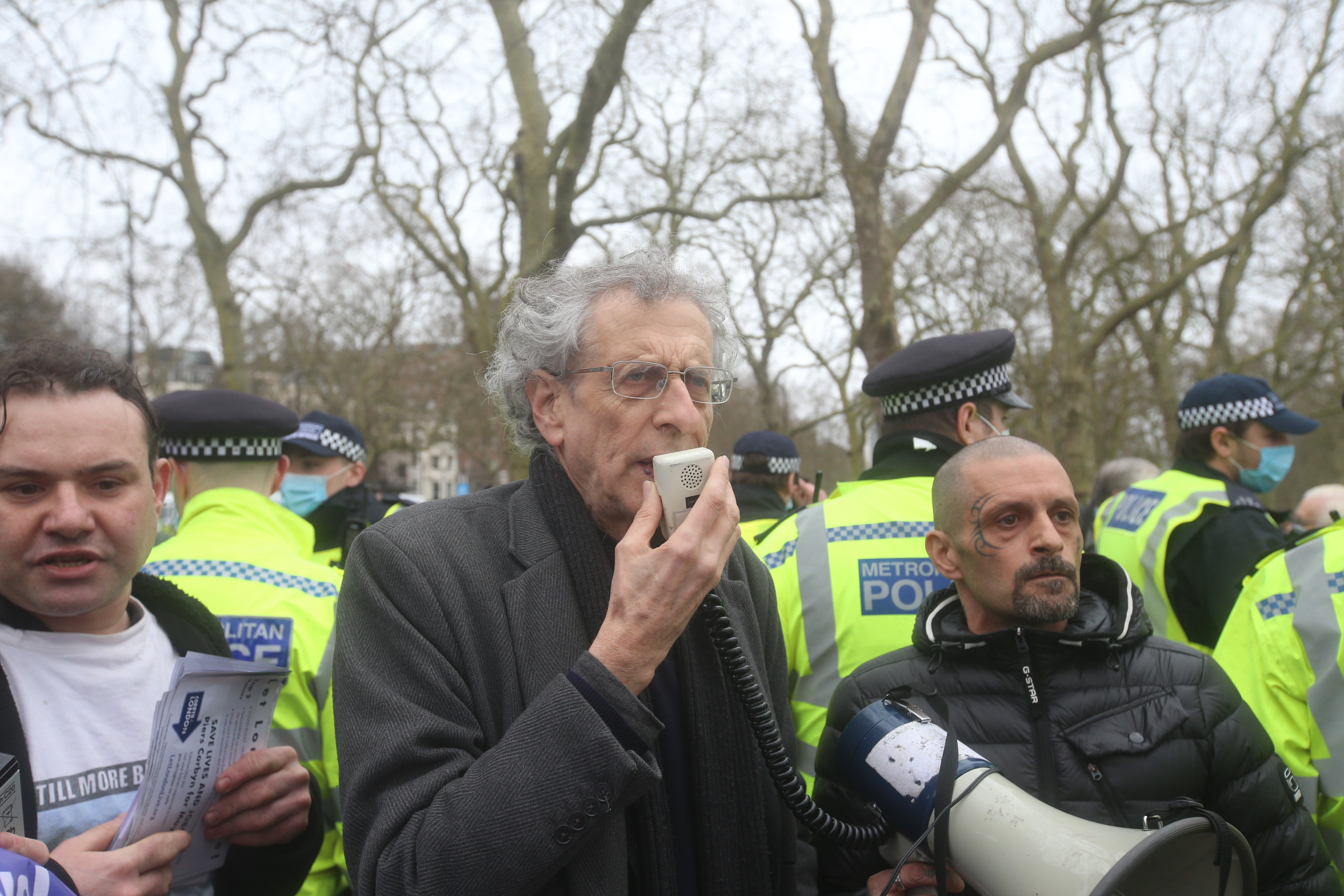 Jeremy Corbyn’s brother Piers Corbyn was out in forceCredit: i-Images

He added: “People who gather as part of the protest risk the health of Londoners. That is why we have a policing plan in place to disperse crowds and where necessary, take proportionate enforcement action.

“This will not just be organisers of the protests but participants too – by now everyone knows their part to play in stopping the spread of the virus and thousands have sacrificed much over the last 12 months to do so.

“We do not want to be in a position where enforcement is necessary – we would rather our officers be in London’s communities, tackling local issues. That is why I would urge people to reconsider joining a protest and stay at home.”

It comes after a controversial new policing bill sailed through Parliament earlier in the week, handing sweeping new powers to cops and judges.

MPs voted 359 to 263 to approve the Police, Crime, Sentencing and Courts Bill, despite Labour’s efforts under Sir Keir Starmer to sink it and campaigners’ fears it will limit protest rights.

One of the powers imposes conditions on non-violent protests judged to be too noisy and thereby causing “intimidation or harassment”.

Labour MPs attacked the proposed laws for removing the rights of protesters – and a separate demonstration against the bill was planned for today. 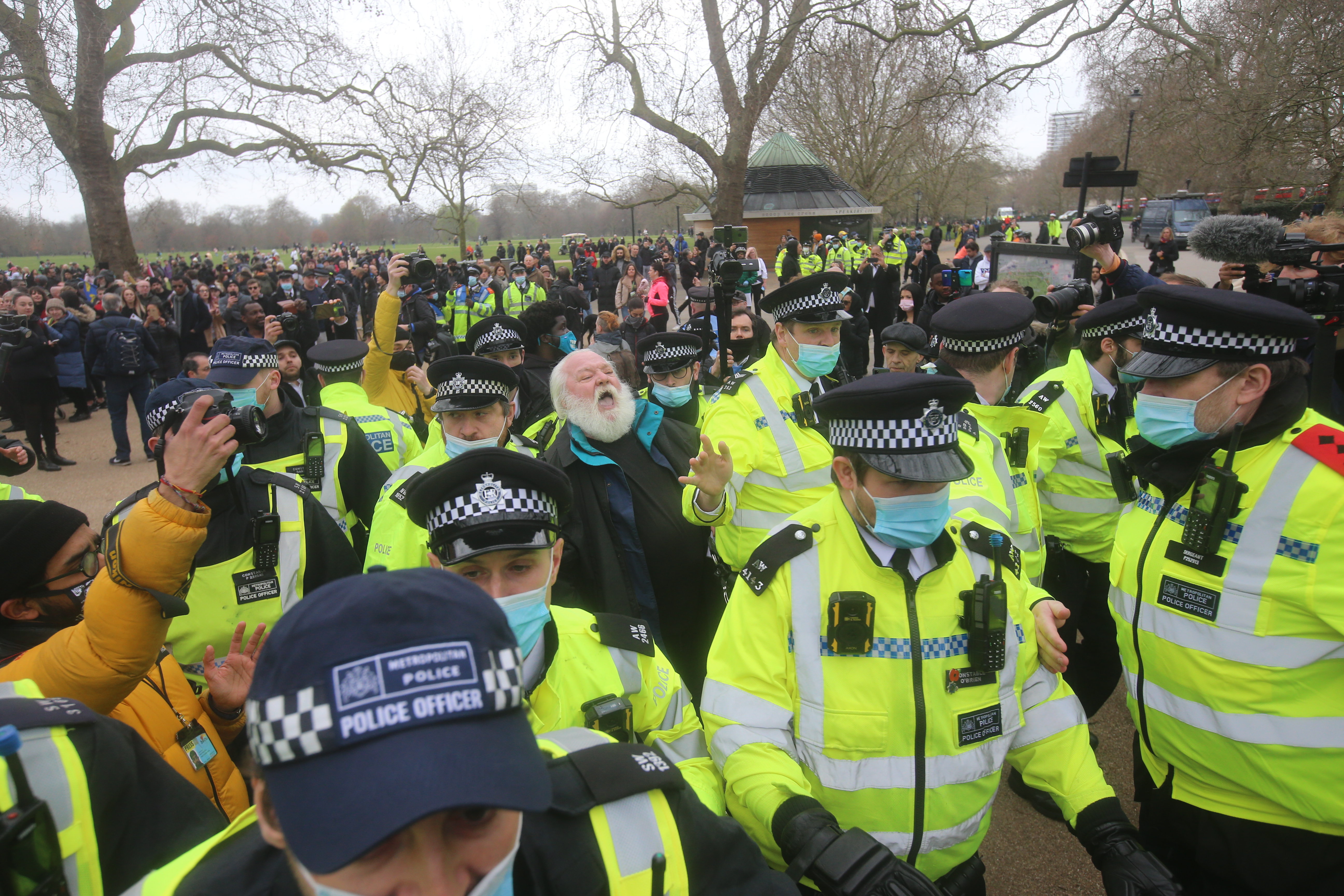 This man was taken away by copsCredit: Reuters

Officers walked through London’d streets today as they monitored the scenesCredit: Reuters 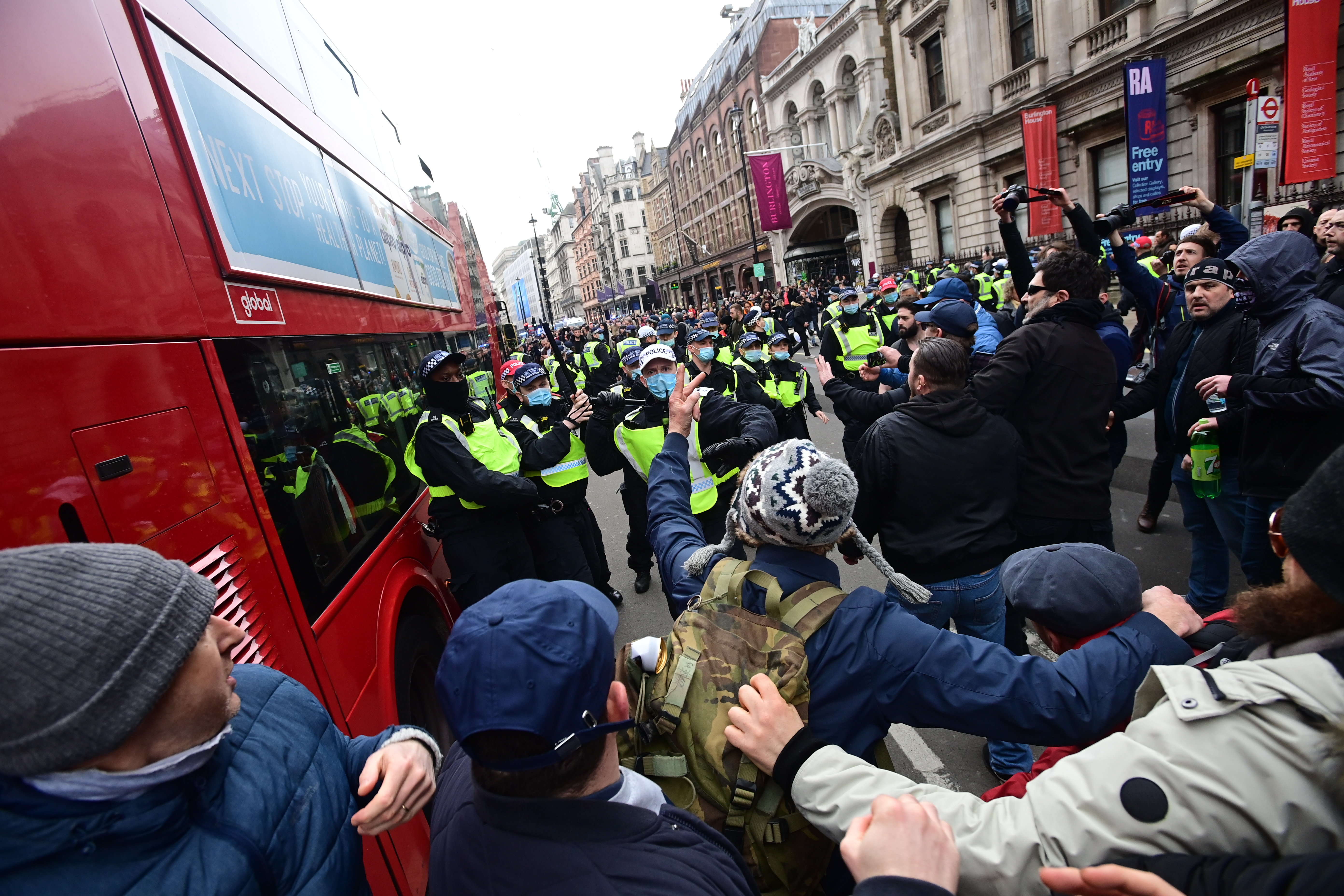 One protester puts two fingers up at police as tensions roseCredit: LNP 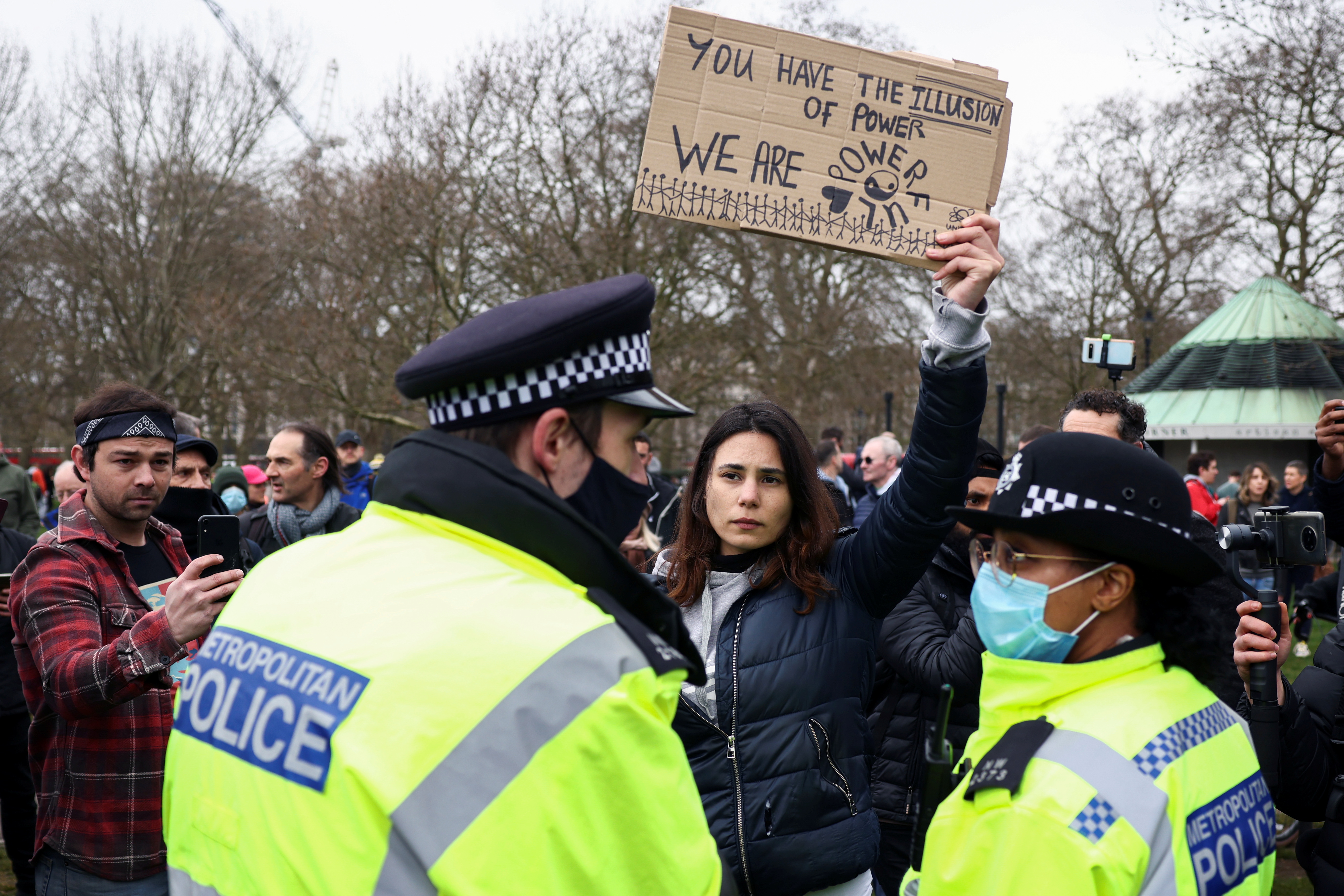 Demonstrators held placards which suggested authorities had an illusion of powerCredit: Reuters 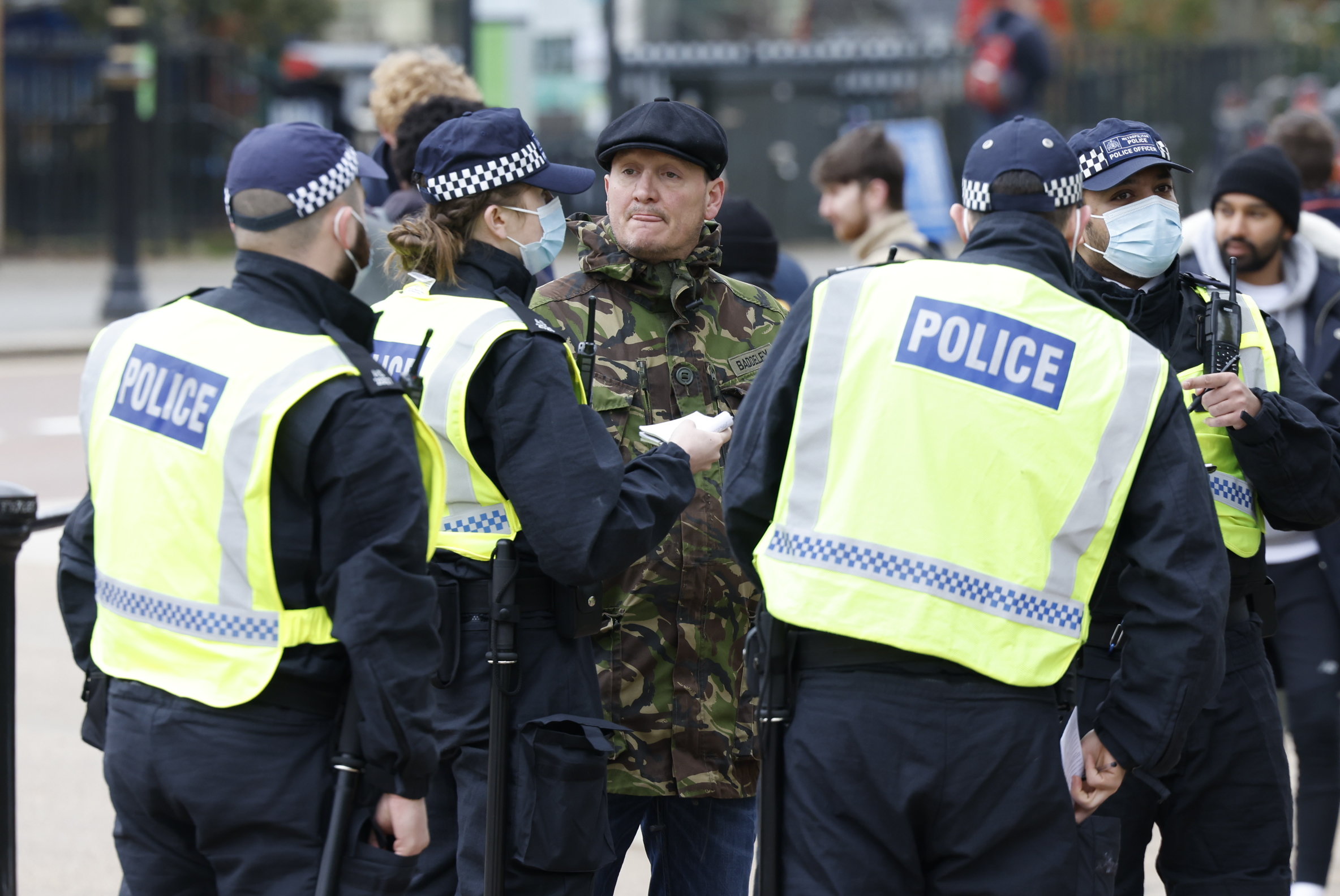 Police were seen speaking to members of the public in London today ahead of the protestsCredit: LNP