One of the world’s most feted pieces of transport infrastructure currently lets down an increasingly popular mode of transport: the bicycle.

Currently, the 2,000 cyclists who cross the Sydney Harbour Bridge’s dedicated cycleway daily must dismount and battle 55 steps on the north side. The number of cyclists struggling on the stairs looks only set to grow: cycling in Sydney’s inner city has doubled in the last two years.

Cycling groups say the steps are risky, cumbersome and inaccessible to families, heavier e-bikes, the elderly, new or nervous riders and those with injuries.

Now, fervent opposition to a new cycle ramp design is highlighting a broader problem: will Sydney ever get over its nimbyism, rival councils’ squabbling and stifling bureaucracy to become a truly cycle-friendly city?

In 1932, cars shared the Harbour Bridge with cyclists. Photograph: State Library of NSW

For its first three decades, the Sydney Harbour Bridge welcomed cyclists over its main deck. But in 1962, heavier motor traffic relegated cyclists to the western side, which was transformed into a cycleway.

The independent mayor of North Sydney, Jilly Gibson, is actively opposing the proposed ramp, and has committed to spending up to $15,000 of public money crusading against it.

She expressed disappointment that Transport for NSW didn’t include the option of a lift in addition to the current steps: “Many cyclists manage that current arrangement effortlessly – go down there and watch,” she tells Guardian Australia.

When challenged that this is about tempting more new or nervous cyclists on to our streets, rather than just serving existing confident ones, and that a lift-and-steps arrangement would cause dangerous congestion, Gibson responds: “There’s congestion there anyway.” 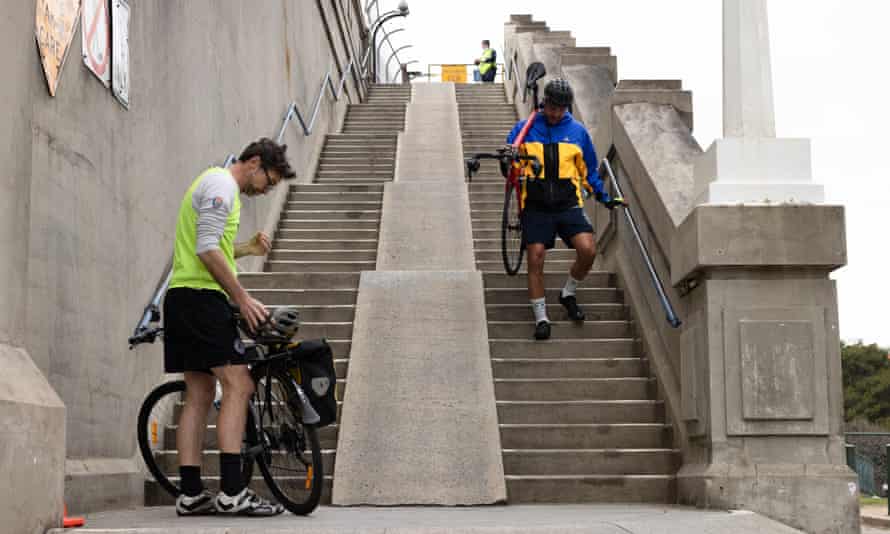 Many cyclists are forced to carry their bikes up and down the stairs at the northern side of the bridge due to a lack of a ramp. Photograph: Carly Earl/The Guardian

Cyclists argue that visible dedicated cycling infrastructure would be backed by a truly pro-cycling council and send a message that cycling is finally being prioritised in a motor-obsessed city.

Gibson advocates an all-or-nothing approach, calling for a dedicated lane for cyclists to be reinstalled over the bridge.

This month, Transport for NSW released a consultation report revealing a preferred linear design. It also revealed a design competition, which Gibson calls “a win” but others suggest is a delay tactic on a project that has been discussed incessantly for over a decade. 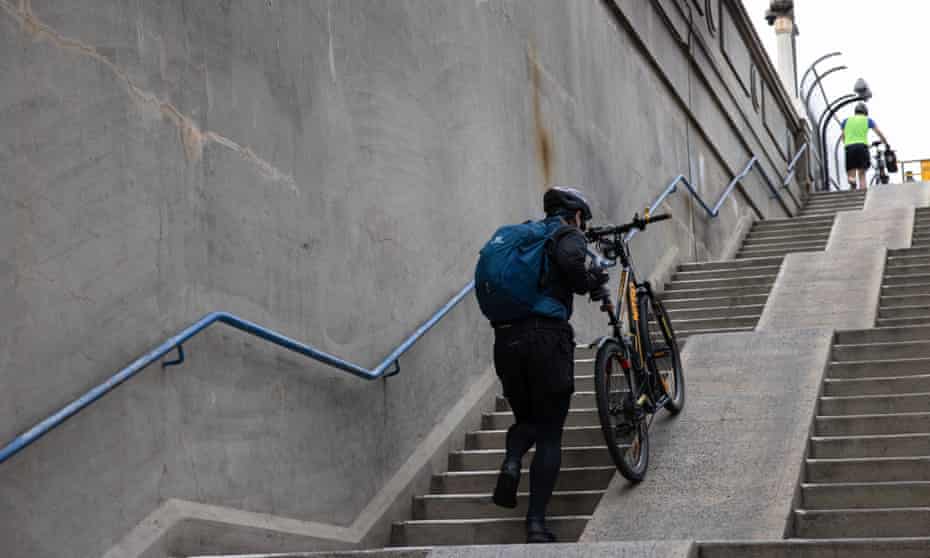 A cyclist is forced to push their bike up the stairs. Photograph: Carly Earl/The Guardian

‘Sydney is so far behind London’

Arriving in Sydney from London six years ago, she couldn’t believe how far behind Sydney was in comparison with London’s 20-year transformation into a cycle-friendly city.

“The attitude here is very ‘us and them’,” she says.

“The south side of the bridge is doing so well thanks to [the Sydney lord mayor] Clover Moore, but Jilly Gibson is the ultimate nimby. She represents an elite minority and she’s not looking at the broader picture – vast swathes might want to cycle through that area. Just saying we don’t want it in our local government area is ridiculous.”

One reason Ditlef-Nielsen believes Sydney is so behind London is because the London mayor controls 32 boroughs and, as a result of successful cycling advocacy, both sides of politics support joined-up cycling infrastructure. Here, it’s more “a patchwork quilt”, she says. 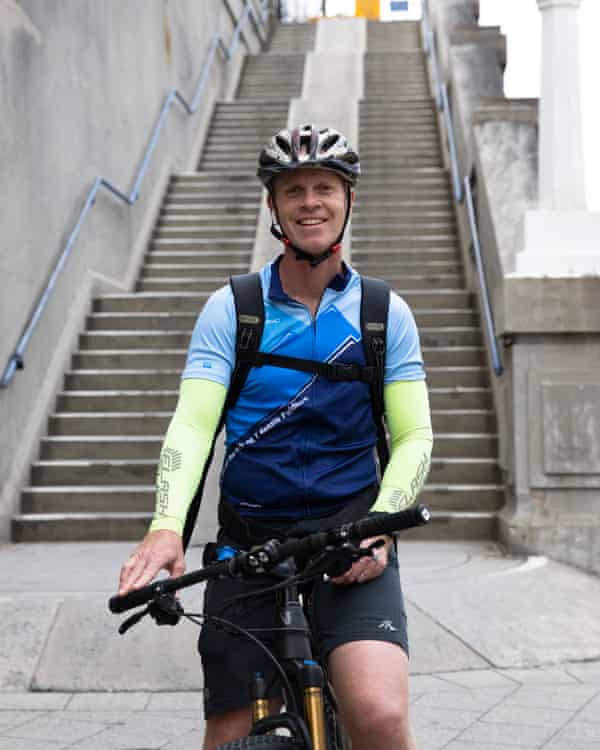 He argues that until the North Sydney council urgently backs better cycling infrastructure, the new ramp will make little difference.

“It’s a dead end for cyclists,” he says. “It’s really difficult to cycle through North Sydney or Kirribilli. We really need separated cycleways to protect us from motorists.”

A tale of two cities

In a sign that opposition to the ramp reflects a broader attitude to cycling infrastructure, last month North Sydney council lost $2.7m of funding offered by Transport for NSW to build a cycle route between Kirribilli and Cremorne.

Various complaints from councillors, including Gibson, regarding the proposed cycleway included that it would “knock out shopper parking”, “further constrain road networks” and “inconvenience local residents”.

At a June council meeting, Gibson can be heard saying: “Transport for NSW are trying to ram through cycleways – we’re having a mini war with them.” She also spoke of the “need to recognise how cranky our residents are about this”, adding: “I’d rather do nothing than anything proposed here.”

Rather than “attempting to retrofit commuter cycleways on the already constrained local road network”, Gibson proposes “promoting the inclusion of cycleways with major highway and arterial road upgrades, such as proposed widening of the Warringah Freeway.”

She tells Guardian Australia: “The community will not accept a loss of parking and neither will I.”

“Gibson and other councillors wouldn’t even vote to support building the most popular and critical section of the route (along Kurraba Road between Clark and Ben Boyd roads in Neutral Bay), despite 70% public support for the overall project,” he says.

“Some North Sydney councillors are appeasing traditional, politically engaged residents who want to maintain an impossible status quo of car reliance, without delivering for the growing number of newer residents in high-density living or children.” 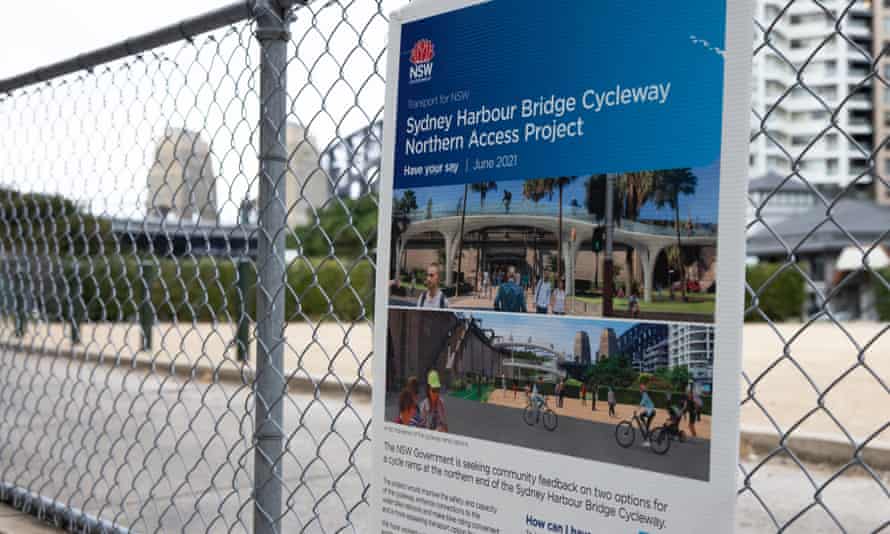 Tony Phillips, 64, from Wollstonecraft uses the Harbour Bridge cycleway weekly. “That new long ramp looked like an eyesore, but it’d be convenient,” he says, preferring the idea of a lane across the bridge to “send the message that cyclists are here”.

“We should be installing world-class cycling infrastructure that pushes the boundaries of engineering, like elevated cycleways,” he says. “It’d put Sydney on the map again, like the Opera House did.”

He’s exasperated by the status quo.

“What strikes me is the inertia; the number of stakeholders that have to be involved to do anything at all. Classic Sydney.

“People witter on about climate change but aren’t prepared to put up with a little inconvenience for longer-term good.”