AFTER discovering her lash technician was seeing her boyfriend half way through an appointment, this woman had to walk around for over 24 hours with false eyelashes on just one of her eyes.

Viewers couldn’t believe Tiktok user Kaci’s story – and many of them have offered to fix her lashes for free. 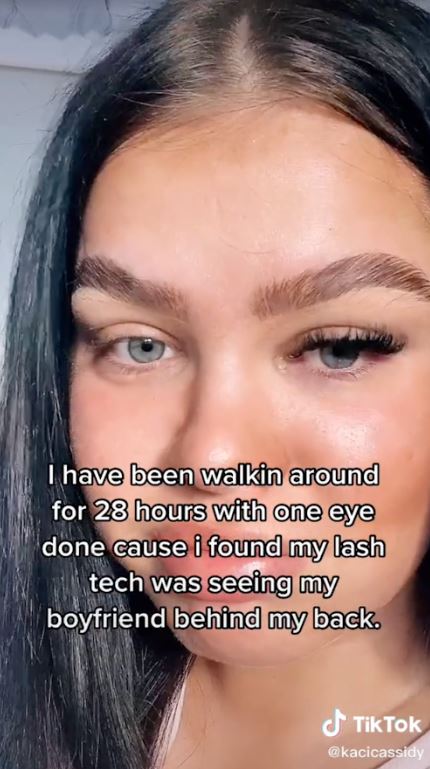 There was a stark difference between Kaci’s eyes after the appointmentCredit: tiktok

In the viral video, Kaci showed off her unsymmetrical lash look and said: “I have been walking around for 28 hours with one eye done cause I found my lash tech was seeing my boyfriend behind my back.”

After dozens of commenters begged her for more details, Kaci told the whole story in a follow-up video.

She explained: “I had my lash appointment as usual. Half way through the appointment, she asked me if I was still seeing so-and-so. I was there like, ‘yeah’.”

She first got the impression that something was wrong, because after she told her lash tech that she was still with her boyfriend, the pair “sat in an awkward silence for ten minutes”. 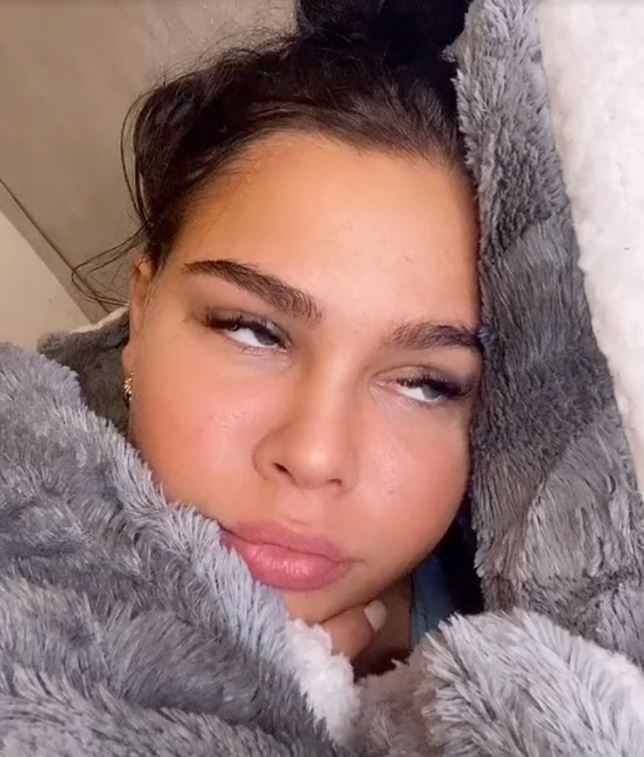 Kaci said she was the bigger person and didn’t kick off at her lash techCredit: tiktok

Eventually, Kaci’s lash tech came out with the truth.

“And then she was like: ‘I’m really sorry Kaci, but I don’t want to fall out with you, I’ve also been seeing him as well. He told me you were split up.’”

Kaci’s response was to get up and leave with just one eye finished.

She said: “I walked out with my one eye done and yeah, I was being the bigger person because I could’ve had a fight, I could’ve literally kicked off, but I just walked out.

The video has racked up 1.4 million views and commenters were stunned by Kaci’s story.

A huge number of lash technicians saw the video and offered to fix Kaci’s eyelashes for free. 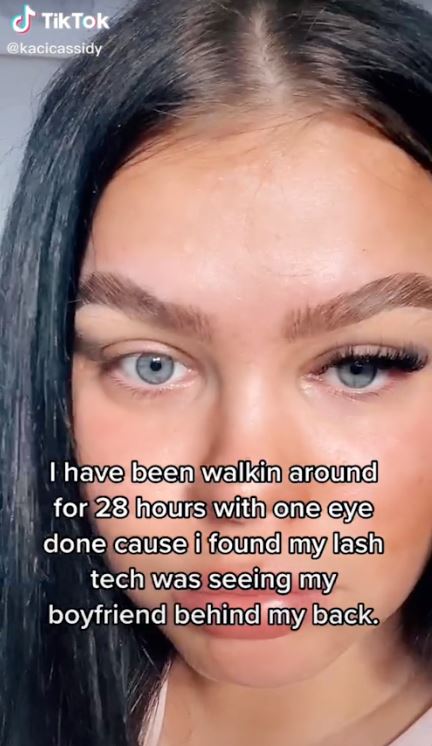 Many commenters offered to fix the lashes for freeCredit: tiktok

Kaci said that her sister fixed her eyelashes for her, but she was touched by the girls who offered to do them for her.

She said: “I want to say thank you to all you lovely girls who actually have messaged me saying ‘I’ll fix them, I’ll do the other eye’. I really appreciate you queens, I love you so much.”

Lots of people thought Kaci should’ve got both sets of eyelashes done and then refused to pay as a way to get her own back.

“Noo you should of stayed and then not paid her”, advised one viewer, while another said: “Should have let her finish then brought it up to her and got them for free.”

Many commenters asked if Kaci paid half price for her half-done lashes.

“This is a highly asked question, I know it’s a joke, but I did not pay for the one eye. I left the appointment, my sister fixed my eyelashes.”

In other beauty news, we shared this woman’s top tips for how to go a week without washing your hair – without getting greasy.

Plus, experts are warning against social media trend that has seen women turn to thrush cream to treat bad dandruff.

And one beauty fan was left mortified after melting her face mask into her hair while styling it and being told she’d need to cut it out.

What time do stores open today?