A TATTOO is for life, so you want your inking to be perfect, right?

If you’ve had a tattoo, it’s highly likely that you spent a while thinking about it to make sure it was perfect.

Getting a tattoo is a nerve-racking experience, you want it to be perfect, right?Credit: Alamy

Well, that’s not the case for one woman.

A lady has taken to Buzzfeed to reveal her tattoo nightmare and it’s safe to say, it didn’t go how she pictured.

The woman explained that she went to a tattoo party but instead of getting an inking from her friend that she knows does tattoos well, she ended up with another lady.

The woman disliked the rude female tattoo artist but agreed to let her do her tattoo.

But as they say, always trust your gut, as the woman was left horrified at her new inking.

She explained: “I took one for the team. My friend has done tattoos for my whole family and does them well.

“His shop had an invite-only party for his best clients, so my brother, his wife, and I were invited.

“A week before the party, his team had given us a flash sheet of tattoos to pick from.

“The party itself was nice, everyone was sober, and we all knew which tattoos we wanted.

“Well, there were two other artists there besides my friend.

“I personally asked if my homie would do mine, since I dislike the woman who works for him.

“My sister-in-law ended up with her instead, and I went to sit with my homie.

“Then she starts telling my SIL that she won’t do the tattoo that SIL had picked because it sucks, and tried pressuring her to get something she didn’t want.

“I ended up trading spots with her, and my SIL got a cute, delicate clover on her collarbone.”

She added: “I got a f**king cabbage-ass flower.

“The artist was so rude.

“I’ll get it covered, though a part of me thinks it’s funny.” 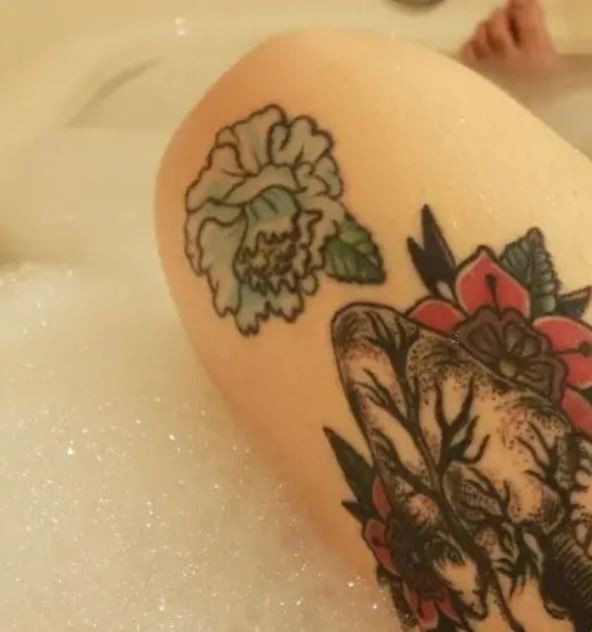 The Buzzfeed user was horrified at what was meant to be a cute flower, ended up looking like a cabbageCredit: buzzfeed

Meanwhile, I wanted Abba lyrics tattooed on my tummy but got the words wrong… I’ll never get another inking again.

Also, I got a tattoo at 17 because it was trendy… it was a total fail, I know SIX people with the same thing.

As well as this, I spent my last £60 on a tattoo but it ended up crooked AND has an awkward double sexual meaning.