WHEN you’ve been getting Botox injections for a while, it can feel as natural as a trip to the dentist or an opticians appointment.

One person who knows a little something about this is lifestyle blogger and TikTok star Whitney Buha. 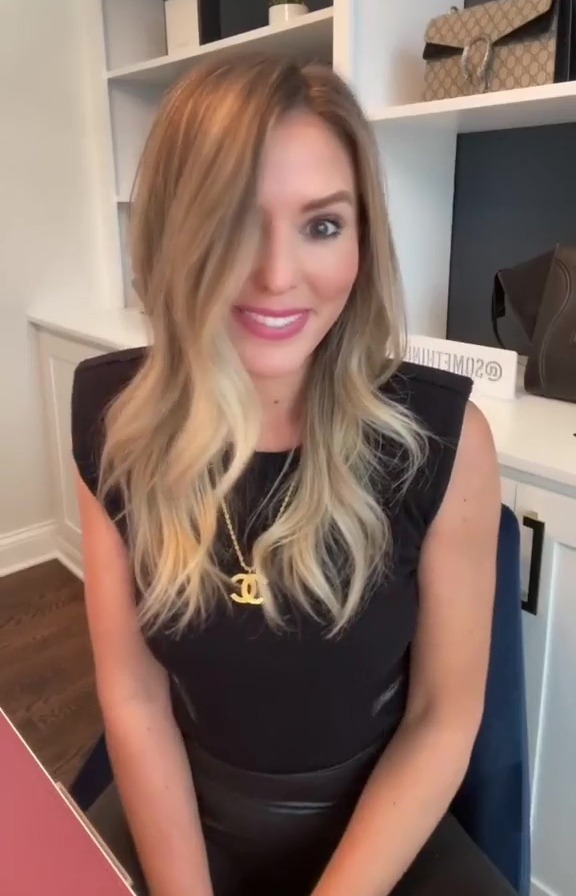 Whitney Buha, from Chicago, had been getting Botox for three years before her botched injection

For the past three years, Whitney, from Chicago, had regularly been having Botox injected around her eyes.

But when she was having it topped up earlier this month, Whitney’s aesthetician made an error which caused her left eyelid to dramatically droop.

In a series of TikTok videos, Whitney explained how the aesthetician had been hoping to balance out her eyebrows by injecting four units of Botox underneath the left brow to lift it.

Whitney said: “Wherever she injected the Botox, it went into the wrong spot and cause my eyelid to droop like crazy like how it looks now.” 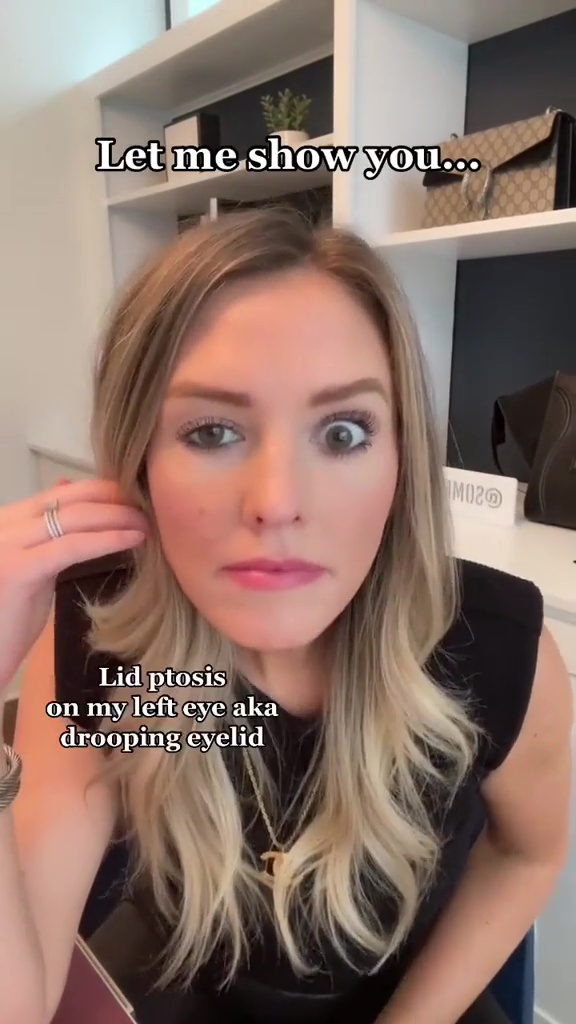 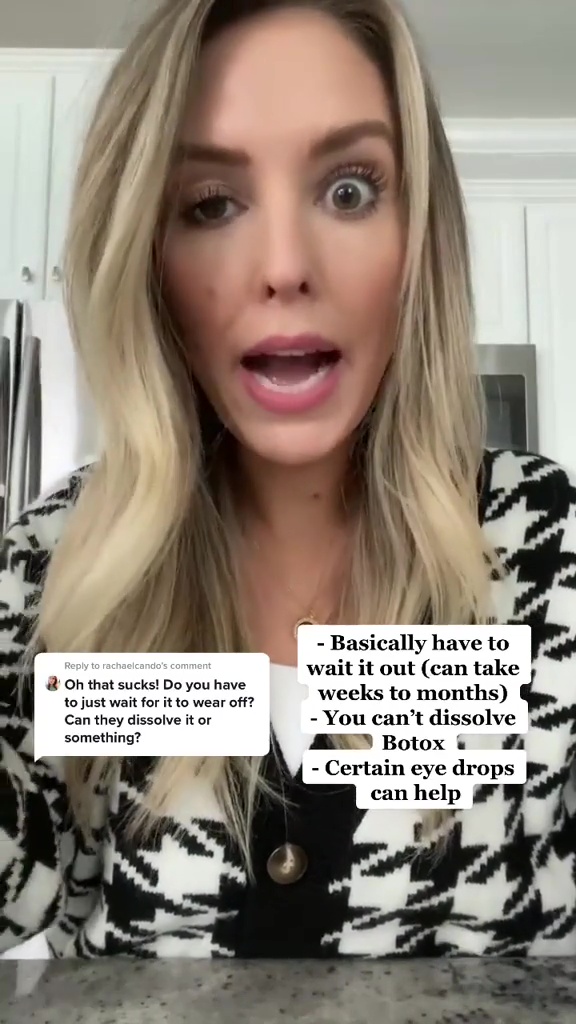 She accidentally injected the levator muscle around Whitney’s eye

Unlike filler, you can’t dissolve Botox which means Whitney has it wait for it to go away on its own and hope it doesn’t have long-lasting effects.

She added: “I have also been told that there are prescription eye drops I can try so I’ll literally go run to the store to get them.

“Otherwise, this could be weeks or months for it to go back to normal.”

In her latest video, Whitney found out that the Botox had been injected into the levator muscle in her face rather than the orbicularis – which had the opposite effect to what the aesthetician was intending. 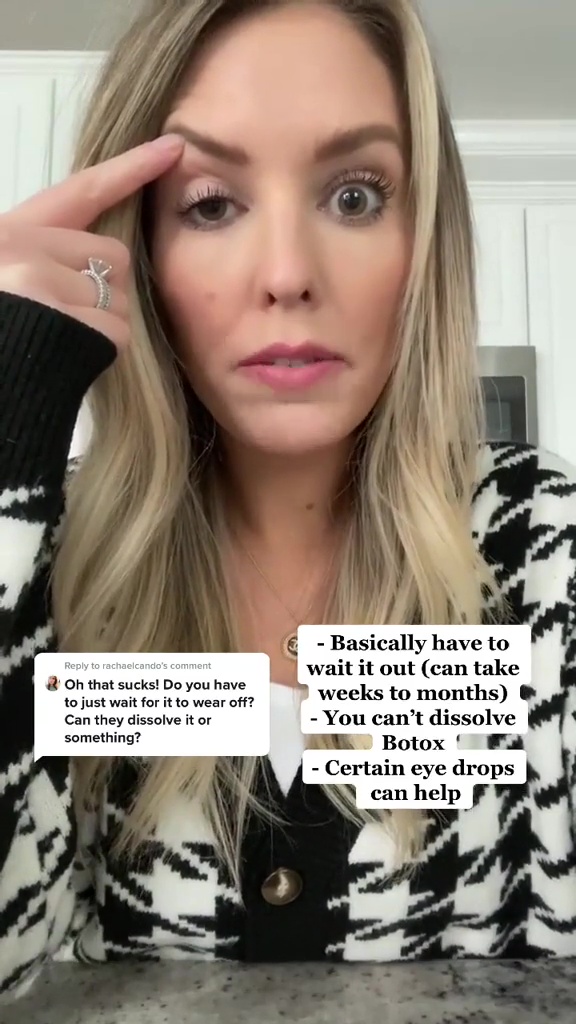 Whitney doesn’t know how long the effect will last

What is Botox and are the injections safe?

Botox is actually the trade name for a substance injected into the skin which is known to inhibit muscle movement, and that can prevent wrinkles from developing or worsening.

The name ‘Botox’ actually comes from the word ‘botulous’ – which means sausage.

It is called this because the substance is related to a naturally occurring poison, which can occasionally be found at dangerous levels in bad meat products.

Scarily, high levels of this poison have the ability to paralyse, and even kill.

Botox freezes muscle movement by blocking neuro-transmitters and this effect lasts for 4-6 months – this means you will need top-ups a few times a year if you wish to maintain your line-free look.

Once you’ve had Botox injected, the effects on the muscles usually become apparent within a few hours, with the main effects appearing after about a week.

Botox is a relatively safe treatment, but it should always be undertaken by a qualified medical professional to ensure that you are getting the correct amount in the right area.

Visiting someone without the correct qualifications and experience could lead to asymmetrical results, muscle drooping, frozen expressions as well as various other dangerous consequences.

And in rare cases you can develop serious problems which include blurred vision or trouble breathing, depending on which are you’ve had Botox in.

Whitney’s videos have racked up over a MILLION views on TikTok – but she told followers that what happened was a “freak accident”.

After one told her that they were scared for their upcoming Botox appointment, Whitney said: “This is super rare. Just find an experienced person to go to.

“I’ve been getting Botox for three years and never had this happen!”

For more beauty stories, this mortified woman tried to give herself a bikini wax but ended up ‘gluing herself together’ by mistake.

Plus this man spent £30k on surgery to look like an Instagram filter but instead gets compared to the ‘Purge’ mask.

I saved a fortune by going grey & ditching beauty treatments