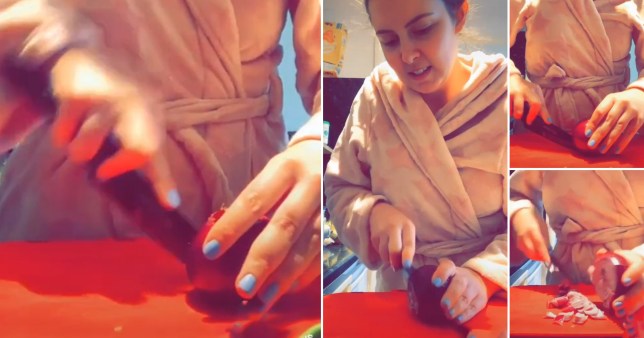 Life is hard enough with having to cut onions.

Not only do they make you cry but chopping them is a load of faff Chefs make it look easy but for the average kitchen cooker, it’s a messy disaster.

However, one woman has come to save our culinary lives with a ‘genius’ onion cutting hack.

In a video posted on TikTok, user @lyndseymjames shared a technique to cut onions that ‘just makes sense.’ Since being uploaded, the video has been viewed over one million times.

‘I thought I’d quickly come on and show you how I cut onions because ,apparently, the way I cut onions is weird, but to me it just makes sense’, Lyndsey says.

‘There’s none of this slicing it and then you know holding it and I can’t be dealing with that.’

Lyndsey tells her followers to take off the outer layer of the onion and cut off one side so it can be laid flat on a chopping board. However, the key is to leave the root attached.

She then makes incisions down the onion from top to bottom, leaving a 1cm gap from the root. This will keep the vegetable together.

‘So, you’re literally cutting segments like an orange,’ she explains.

Once the bottom of the onion ‘looks like a flower’ Lyndsey says to place it on its side, slice and there you have it, perfectly chopped onion.

‘Why would you do it any other way?’ she asks.

Those in the comments underneath the video praised Lyndsey for her smart hack.

Another asked: ‘Why have we all been cutting onions wrong?’

However, some criticised the cutting technique. One disgruntled user said: ‘I don’t mean to be the Debbie downer but that is the same way everyone cuts onions except you didn’t cut it in half so it’s less safe.’

Nevertheless, we think it’s the only way to cut onions going forward.

Do you have any life saving food prep hacks?

Tell us more in the comments below, or ping us an email at [email protected].