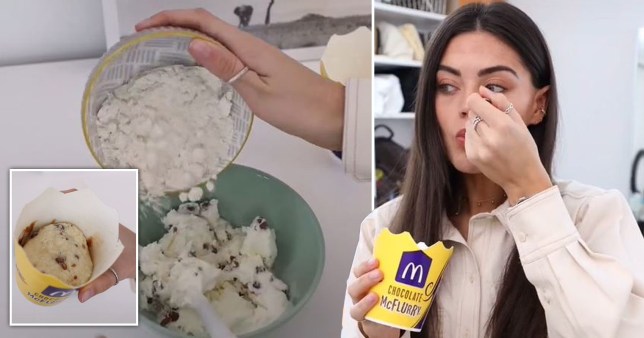 All you need is self-raising flour (Picture: @emilycanham TikTok)

McFlurry’s are a McDonald’s staple and adored by many.

But have you ever thought about turning one into a cake?

Well, one woman has done it – and people are confused.

Fashion and lifestyle influencer Emily Canham shared a video this week of a recipe hack that makes a ‘McFlurry cake.’

In the video, she added self-raising flour only to a Maltesers McFlurry in a bowl. Then she popped the mixture back into the McFlurry pot and placed it into the microwave for around two minutes.

When it was done she showed the final result of the ‘cake’ and said: ‘You just have to add flour and it tastes so good.’

However, some people were horrified and confused at the McFurry confectionary creation.

‘Did she just put cardboard into a microwave?’ asked one viewer.

Another said: ‘Omg not the raw flour girl.’

‘Is everything ok at home Emily is this a cry for help?’, quizzed a worried follower. 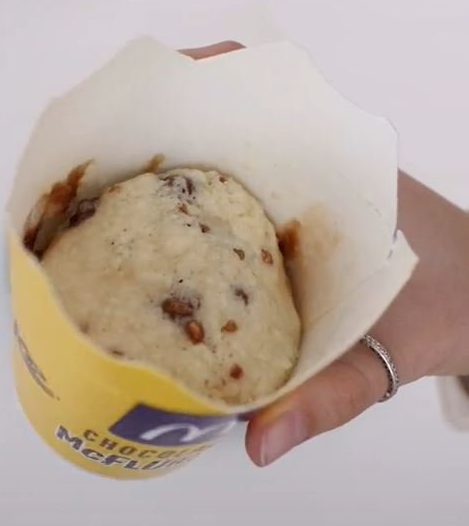 Yet there were many who were intrigued and even delighted by the recipe.

‘This is amazing’ wrote one excited user.

Meanwhile, another TikTok user @heyitsamess tried making the McFlurry cake to see if it tasted as good as Emily claimed.

In the caption, Amy thanked Emily and called the cake ‘a game changer.’

‘I’ve just seen Emily Canham’s new post, she basically microwaved a McFlurry and turned it into a cake, so of course I’ve got to give it a go,’ she said in the video.

And the final result?

Amy proclaimed it was a hit and said: ‘Oh my god that is so nice.’