COPS in California have been accused of “killing” a suspect in a chilling echo of George Floyd’s deadly arrest, say reports.

Distressing body cam footage shows Mario Gonzalez, 26, pinned down by his shoulder and neck as the dad desperately gasps for air, saying, “I didn’t do nothing, OK?” 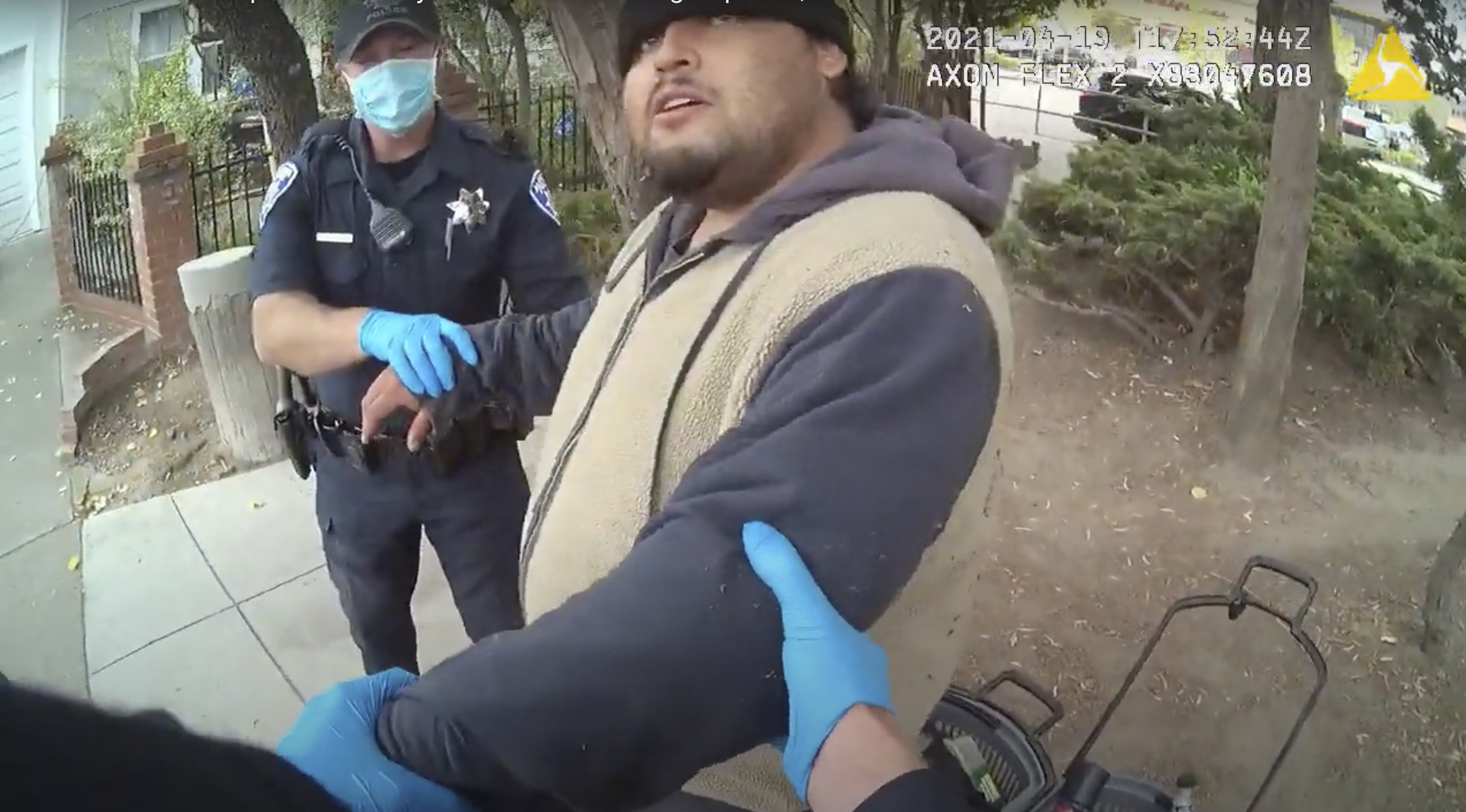 Relatives said Mario, who weighed 250lbs, was otherwise healthy and had no known medical conditionsCredit: AP

Why was Mario Gonzalez being arrested?

Police in the Northern California city of Alameda arrested Mario Gonzalez in a park after receiving 911 calls complaining that he appeared to be disoriented or drunk.

Footage released of the April 19 callout starts with 911 calls about a man seen ‘loitering’ near homes.

One resident told the operator: “There’s a man [near] my front yard… talking to himself, and no mask, and I went out there, as the dogs were barking at him, and he was talking to us but he’s not making any sense.

The local said the man was sitting on the other side of his front fence, but “the dogs don’t like him” so close to the property. 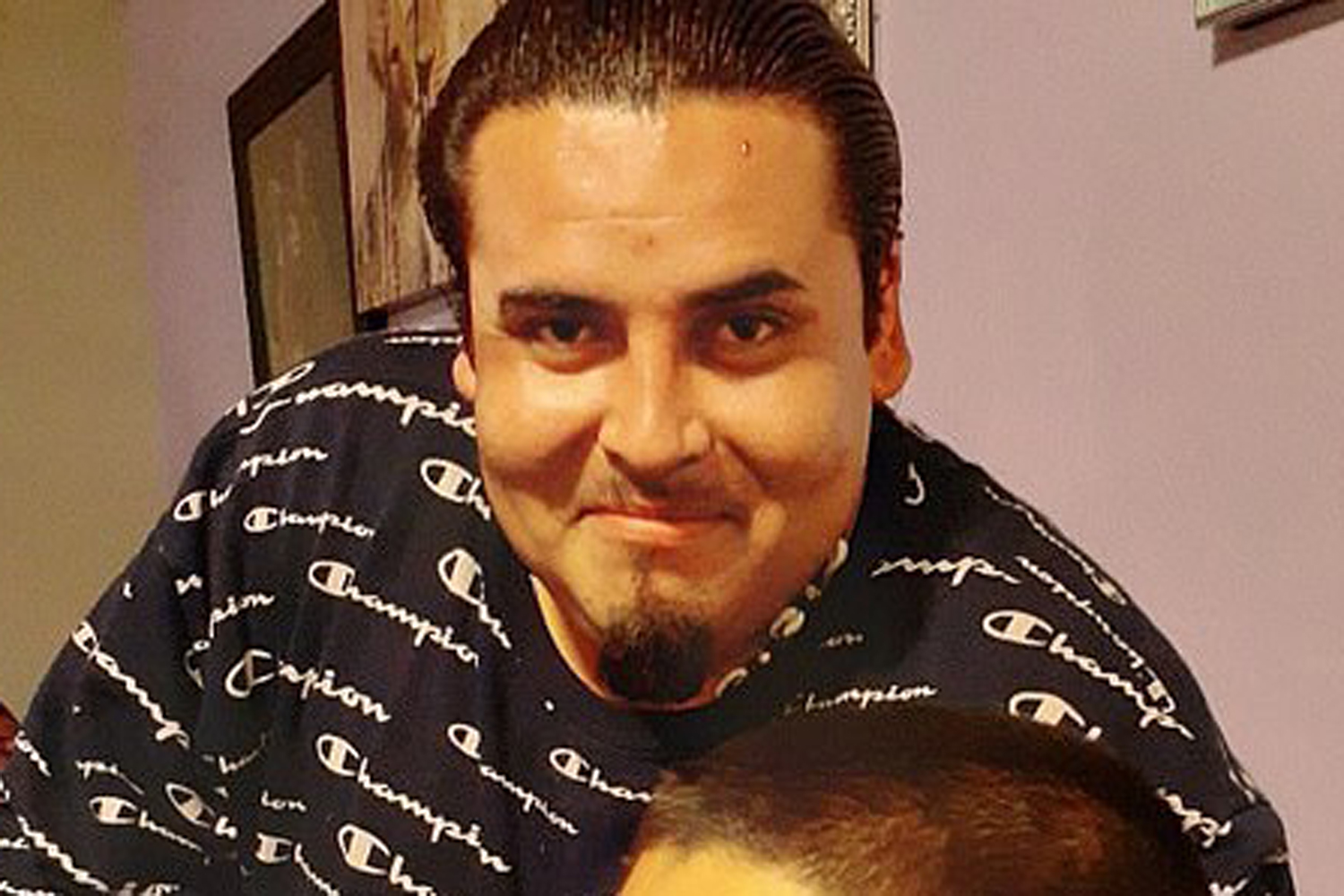 Chef Mario Gonzalez, 26, was dad to a four-year-old sonCredit: Gofundme

He added that the man was “hanging out, I don’t think he’s doing anything wrong, he’s just scaring my wife”.

Another man also rang to complain about “a man in a park”, with “two alcohol bottles”, one of which was heard being “smashed on a stump he’s standing next to”.

The man confirmed he couldn’t see any weapons on him.

He was also seen “brushing his beard” with a comb.

The 911 operator asked if the appeared to be under the influence and the second caller replied, “he might be, he’s been loitering around for half an hour now”. 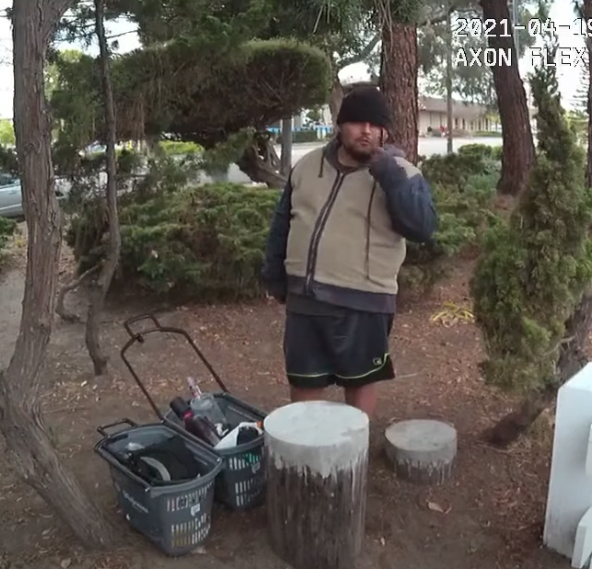 Gonzalez was seen ‘brushing his beard’ in the streetCredit: Alameda Police Department

What happened in the Alameda police bodycam video?

When cops arrive at the scene, it begins very calmly, with one officer asking Gonzalez: “Hey bud, how’s it going?

“I’m just checking on you, to make sure you’re OK, somebody called and said you were maybe not feeling so great?”

The man turns around and calmly replies, “well, I’m feeling alright”, while adding that he has been standing there for “the longest” but “I don’t know what’s going on”.

Gonzalez repeats that he is feeling OK, and confirms that he doesn’t want to hurt himself.

He then leans on a tree before talking about something ‘blue’, and they chat about living in Alameda. 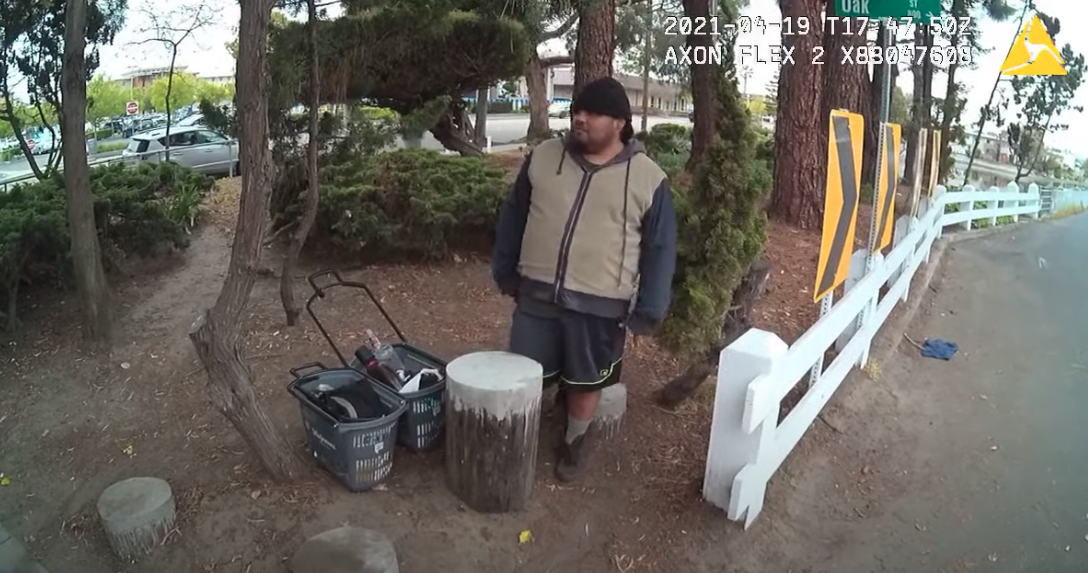 He seems dazed, and struggles to answer their questions.

One of the cops told him he was ‘concerned’ about the open containers near him.

The officer also asks his name, and tells Gonzalez he shouldn’t be drinking in the park, before asking for his identification.

A rambling Gonzalez looks nervous and shifts from foot to foot in front of them, before two officers take one hand each, and ask him to move forward as they don’t want him to “fall down”. 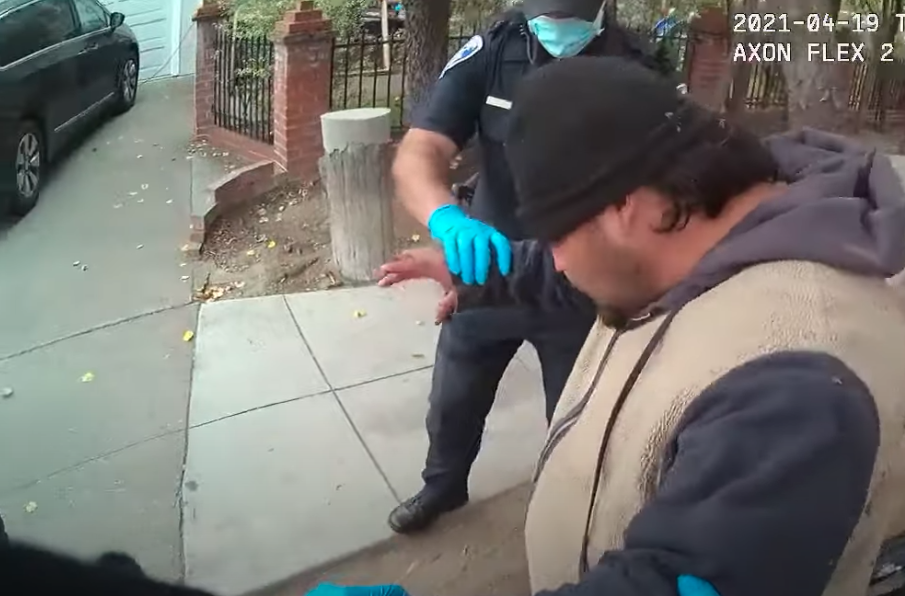 Mario Gonzalez is led away from the parkland by the two copsCredit: Alameda Police Department

They just call him ‘Mario’ as he still hasn’t fully identified himself.

Gonzalez is told not to resist them, and he is repeatedly ordered to put his arm behind his back. He’s also told not to “fight us”.

He can be heard saying “please stop” and “don’t do it”.

At one stage one cop asks the other if he “has his legs”.

The officers repeatedly ask him for his full name and birthdate.

His palms are blotchy and red after his hands were twisted behind his backCredit: Alameda Police Department

“I think you just had too much to drink today, OK? That’s all,” the same cop says. Later, he adds, “Mario, just please stop fighting us.”

Gonzalez, who weighed about 250 pounds, pants and grunts loudly and shouts “ahhhh” as he lies face-down on some wood chips while the officers restrain him.

He’s told to “calm down” and to “stop kicking”.

One officer later puts an elbow on his neck and a knee on his shoulder, the body cam footage shows.

A cop is seen on top of him, on the groundCredit: Alameda Police Department

“He’s lifting my whole body weight up,” an officer says at one point.

One cop also appears to put a knee on his back and leaves it there for about four minutes as Gonzalez gasps for air, saying “I didn’t do nothing, OK?”

Gonzalez’s protests appear to weaken and after about five minutes he seems to lose consciousness.

Shortly before he stops breathing, one officer asks the other: “Think we can roll him on his side?” 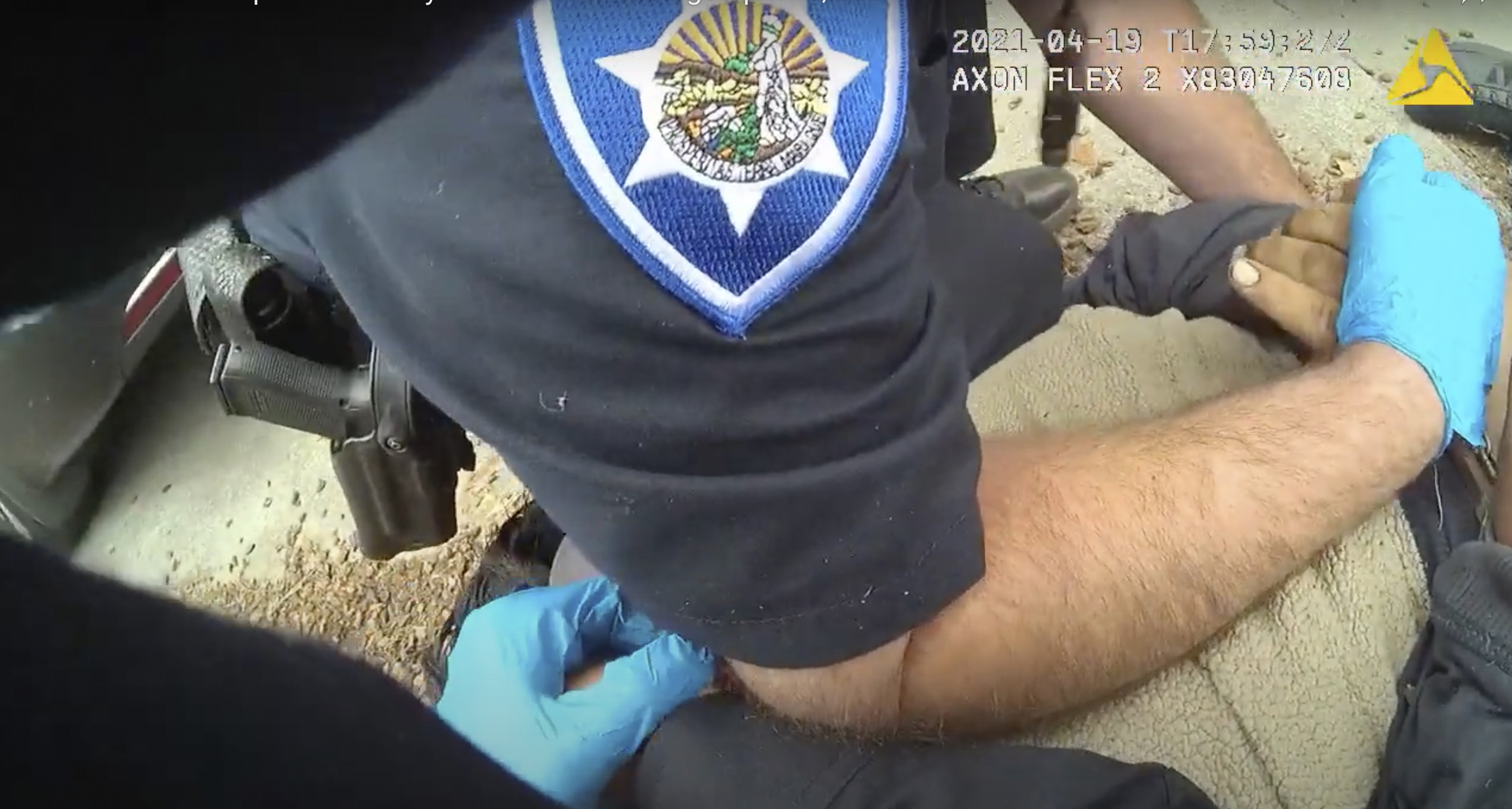 Mario was held down and eventually cuffed, before losing consciousnessCredit: AP

But the other answers, “I don’t want to lose what I got, man.”

Apparently seeking reassurance, the first officer asks “we got no weight on his chest?” then repeats “No! No weight … no weight.”

All of a sudden, there is no sound from Gonzalez in the body cam footage.

The cops roll Gonzalez over and perform cardiopulmonary resuscitation, saying “Mario” repeatedly, and “wake up, wake up”, as they decide to take the cuffs off him.

But he was later pronounced dead at a hospital.

Gonzalez left a four-year-old son and he also was the main caretaker of his 22-year-old brother, who has autism, his family said.

The cops struggle with him, as he can be heard panting and saying ‘ahhh’ on the groundCredit: Alameda Police Department

An autopsy is pending to determine the cause of the chef and construction worker’s death.

But at a news conference on Tuesday April 27, family members blamed the police, alleging that officers escalated what should have been a minor, peaceful encounter with the unarmed man.

“The police killed my brother in the same manner they killed George Floyd,” said his brother, Gerardo Gonzalez.

“They broke my family for no reason,” she added.

Mario never tried to kick or threaten the officers, said family attorney Julia Sherwin, who added: “This would have felt like torture.”

The attorney is an expert in restraint asphyxiation who acted as consultant in the prosecution of killer cop Derek Chauvin.

Chauvin was convicted of murdering George Floyd by kneeling on his neck for nine minutes last year in Minneapolis. 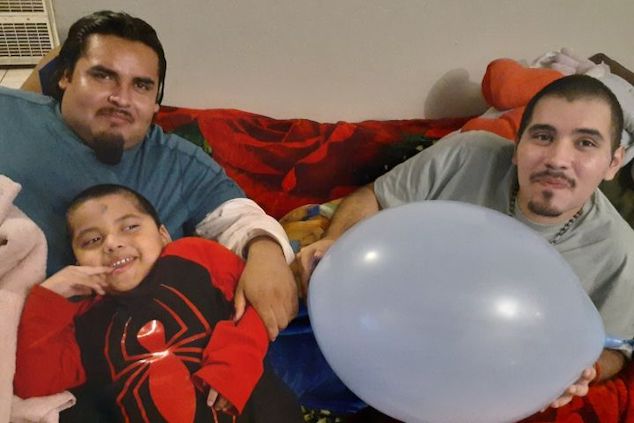 Mario was also primary caregiver to his younger brother, who has autismCredit: Gofundme

His death sparked worldwide Black Lives Matter protests and calls to defund police departments in the US.

Alameda “is committed to full transparency and accountability in the aftermath of Mr. Gonzalez’s death,” the city said in a statement.

It said that Gonzlez’s death is under investigation by the Alameda County Sheriff’s Department, the county district attorney’s office and a former San Francisco city attorney hired by the city to lead an independent probe.

The three officers involved in the arrest have been placed on paid leave during the probe.

Inside No. 9 series 6 release date and first look at Wuthering Heights