THE identity of street artist Banksy has never been revealed despite his worldwide fame.

But for years, he has created complex street art using the cover of darkness to keep his anonymity. 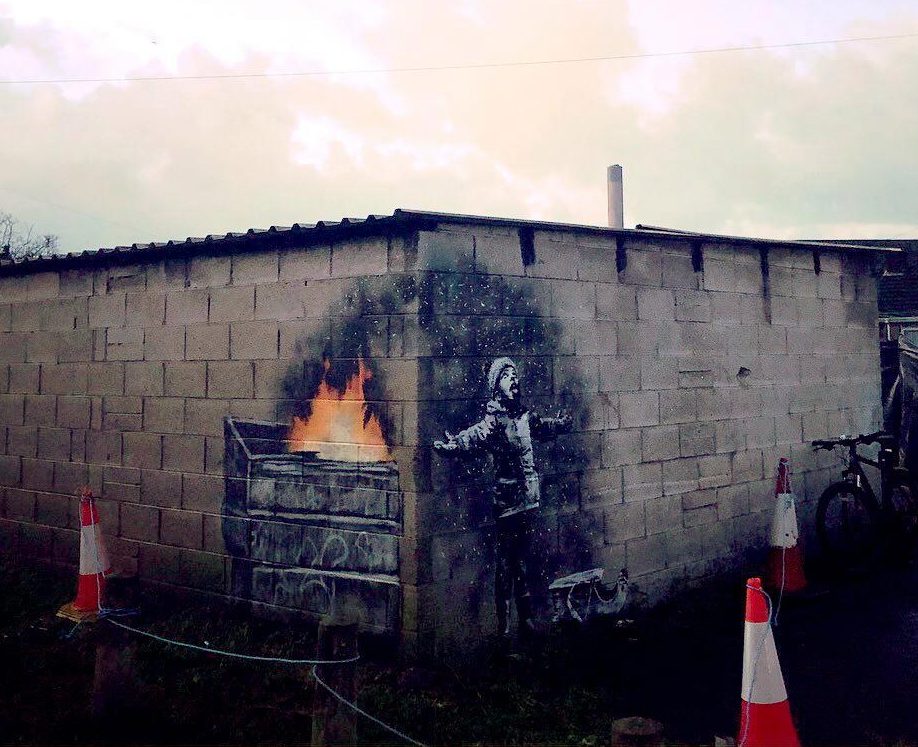 Banksy visited Port Talbot on the weekend of December 15 and 16, 2018, to paint a mural on a garage wallPA:Press Association

Banksy is an anonymous English-based street and graffiti artist as well as a political artist.

His work has been spotted around the south of England, including London, Brighton and Bristol, although his art has often popped up in prominent international locations.

Has his identity ever been revealed?

Banksy has never been unmasked and it is believed his refusal to reveal himself started as a way of avoiding prosecution for vandalism.

The elusive artist is believed to have given a glimpse of his identity in a 2003 interview  ahead of his Turf War exhibition.

He is wearing a baseball cap and has a T-shirt pulled over his lower face, but his eyes, eyebrows and forehead are visible.

“I’m disguised because you can’t really be a graffiti writer and then go public,” he tells Gordon, who has since retired.

“The two things don’t quite go together.”

Names in the frame – who is Banksy? 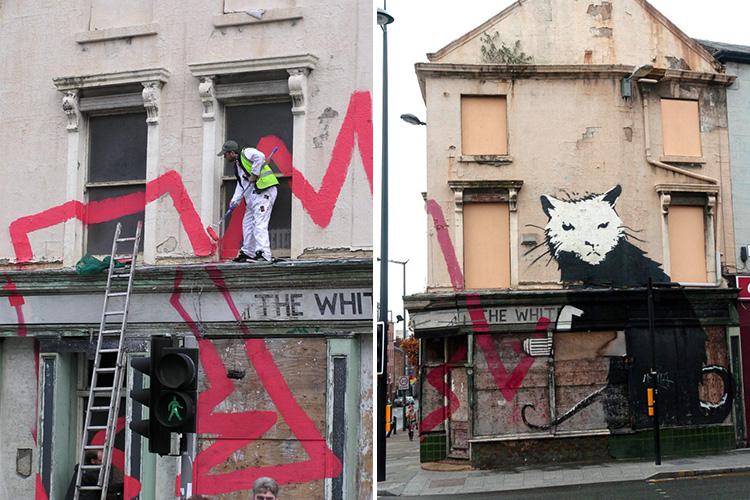 How did Banksy get started?

He first burst into prominence in the early 1990s as a graffiti artist in the group DryBreadZ Crew.

Banksy used his works to highlight the corruption and inequality in society with a smattering of humour.

Along with his group, they created works around Bristol.

How does Banksy make money?

Banksy is believed to make money from selling his art.

From the late 90s, reports claim Banksy had an agent, called Steve Lazarides who helped him sell his pieces.

He and his other group of artists created the website, Pictures On Walls (POW), a website that provided customers with affordable artwork.

The artist has dabbled in the world of film, releasing the “street art disaster movie” Exit Through The Gift Shop.

And in 2015 he opened Dismaland, a large scale installation in Weston-super-Mare lampooning Disneyland.

Banksy has also made money by selling his artwork at auction.

In October 2018, his artwork titled Girl With Balloon sold for £1million at Sotheby’s in London.

But a secret shredder caused the painting to self-destruct after the sale, with art experts believing it now to be worth double. 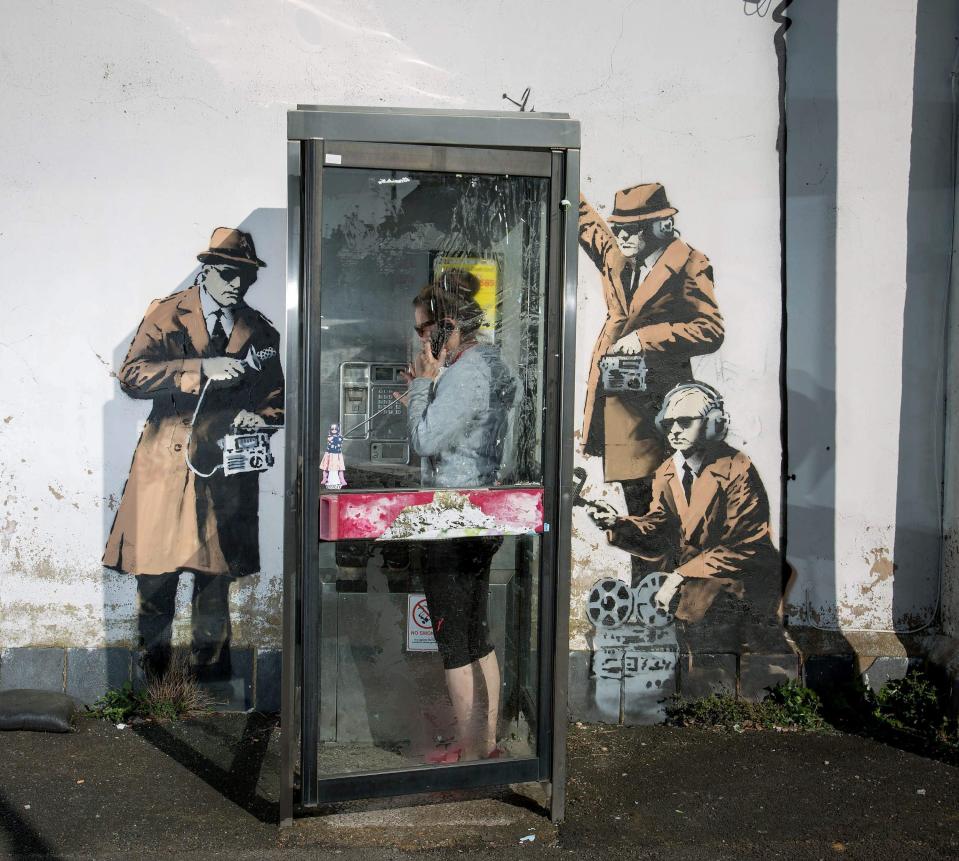 One of Banksy’s best known works of three men wearing sunglasses and using listening devices to snoop on a telephone box near GCHQ in CheltenhamSWNS:South West News Service

What famous art has Banksy created?

Banksy has left his memorable mark all over the world but has been most prolific in the UK.

The guerrilla artist is known to have created more than 120 works spanning three decades. 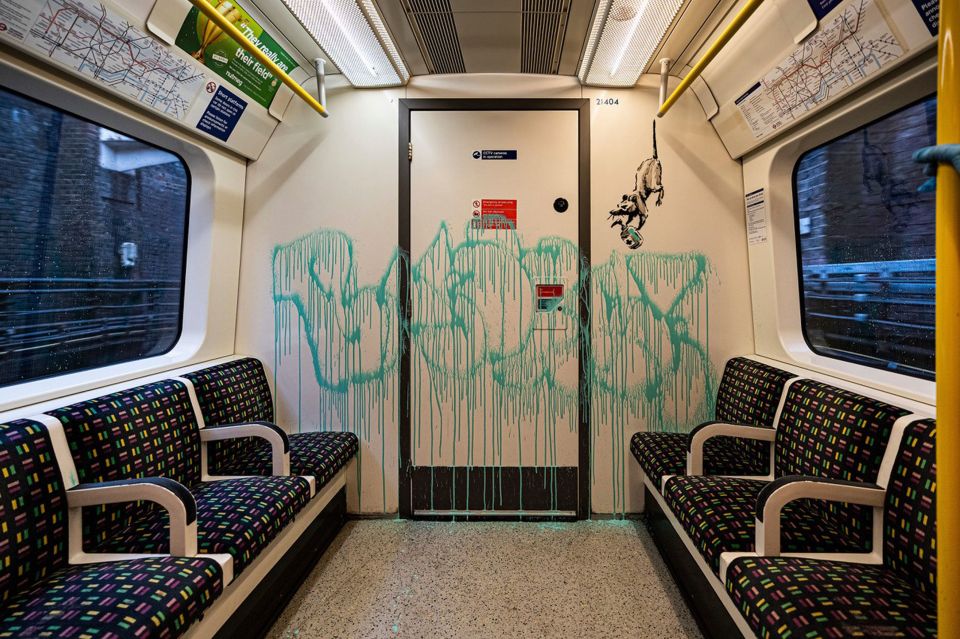 What is Banksy’s net worth?

According to Celebrity Net Worth, the artist Banksy’s net worth is $50million (£39.6million).

12 years after hitting the scene, in 2002, Banksy had his first gallery exhibition in Los Angeles at the 33 1/3 Gallery.

From there, Banksy became a fixture on the art scene, with his pieces going for big prices at auction.

Popstar Christina Aguilera bought one of his works for £25,000.

In October 2019, a Banksy painting showing the British Parliament as monkeys sold at auction for $12 million.

When is the Banksy exhibition in Japan?

An exhibition of Banksy’s work had been planned for August 2020 but was delayed because of the coronavirus outbreak.

The exhibition hasn’t been organised by the street artist but is expected to feature stencil works that are owned by private collectors.

Interest in Banksy’s work was fuelled in the country when a drawing bearing a resemblance to a famous Banksy painting “Umbrella rat” was spotted at a monorail station in Tokyo in January 2019.

In a tweet, the capital’s Governor Yuriko Koike called the artwork a possible “gift to Tokyo”.

The door has now been removed and placed in storage to prevent any damage to it, officials said.