What is on the McDonald’s vegetarian and vegan menu?

MCDONALD’S is known for its mouth-watering beef burgers and chicken snacks that fans crave – but where can veggies look for a fast food feast?

Luckily McDonald’s has their backs with its own vegetarian and vegan range.

It means fans can still enjoy a treat from Maccies without feeling guilty about what’s on offer on the menu.

Currently at the fast-food giant there’s over 30 items that cater for the dietary requirements.

It still includes burgers, so anybody laying off the meat doesn’t have to miss out.

Plus there’s bitesize snacks and sides, and even sweet treats to try. 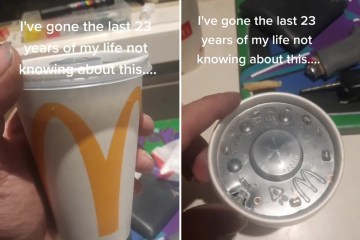 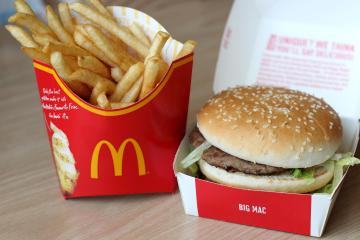 And almost all of the drinks range makes the cut too.

Here’s everything on offer…

The McPlant burger was rolled out in October last year at hundreds of locations and is now permanently available at all UK restaurants.

It includes a Beyond Meat patty topped with vegan cheese, along with the usual salad and a vegan burger sauce in a classic sesame seed bun.

It’s Vegetarian Society vegan approved – meaning there will be no cross contamination with animal products in the supply chain or the kitchen.

The burger alternative will set most fans back around £3.69.

We blind tasted a vegan McPlant and a beef burger when it came out, and this is what we thought.

The Spicy Veggie One

The Spicy Veggie is a vegan favourite at McDonald’s.

It contains Veggie Dippers with a spicy relish, crisp lettuce and tomato.

It’s all wrapped up in a soft, toasted tortilla wrap and costs £3.09.

Just like the McPlant burger, it’s also vegan certified by the Vegetarian Society.

The Vegetable Deluxe isn’t suitable for vegans, but it is for vegetarians.

The £3.69 burger alternative has red pesto veggie goujons with sandwich sauce and shredded lettuce in a sesame topped bun.

McDonald’s Veggie Dippers come in packs or two or four.

They’re made up of red pepper and sundried tomato pesto.

And they’re all coated in crispy golden breadcrumbs.

Even though they’ve got veggie in the same, they’re vegan too, and will set fans back £3.59.

Vegans and vegetarians can have the hash browns just as they come.

Hash browns are a McDonald’s staple – on their own or as a side at breakfast time.

Crispy on the outside and served until 11am for the price of 89p.

Vegans and veggies will be delighted to know that McDonald’s fries are meat and dairy free.

Fluffy on the inside and crispy on the outside, they’re cut from whole potatoes.

Prices vary depending on which size you pick up, but you’re not going to spend much more than £1.49 on the side staple.

If you are looking for a veggie option on McDonald’s breakfast’s menu, this could be a suitable choice.

You can enjoy pancakes drizzled in golden syrup to start their day with a sweet treat, only setting you back £2.99.

The sweet treat isn’t right for vegans though.

McDonald’s side salad is perfect for vegetarians and vegans alike, if they’re happy to part with £1.9 for the healthy snack.

McDonald’s sells porridge for early birds in select stores, and luckily for vegetarians they can fill up on the snack in the mornings.

Vegans aren’t so lucky though, as they can’t try the breakfast staple.

They don’t have to fork out £1.49 for the brekkie choice either though.

The best news for McDonald’s lovers is that McFlurrys make it onto the veggie menu too.

That means they can enjoy either of the new Flake flavours or the reigning Smarties, Oreo, and Malteser options whilst sticking to the veggie diet.

The dairy based product isn’t suitable for vegans though.

Any of the large McFlurries will cost you 99p, while the mini versions are just 79p.

If you’re in need of something to wash all those treats down with, then you won’t be disappointed to find most of McDonald’s drinks range makes it onto the veggie menu.

If you’re after something hot you can get black coffee to toffee lattes, while fizz fans can enjoy Fantas, Cokes and more.

How to make your own McDonald’s guide 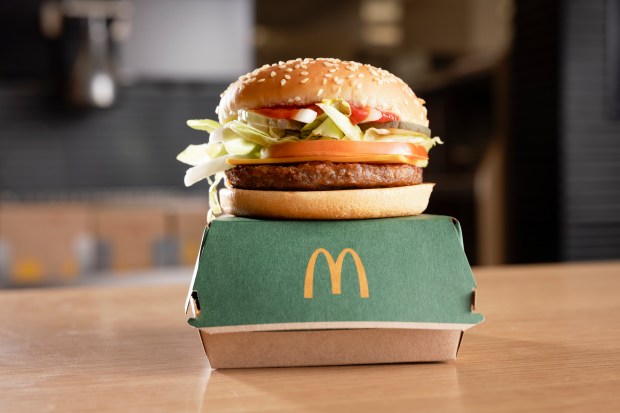 Parents remortgage to pay for £500,000 cancer treatment for daughter