THIS is the vile moment an Asda delivery driver was caught taking a POO outside of a customer’s home.

The grim clip shows the driver standing outside of his van – believing he had protected his modesty by leaving the door ajar – and quickly pulling his pants back up.

The Asda delivery driver is seen grabbing a wad of loo roll conveniently stashed on his front seatCredit: ImJustSheff 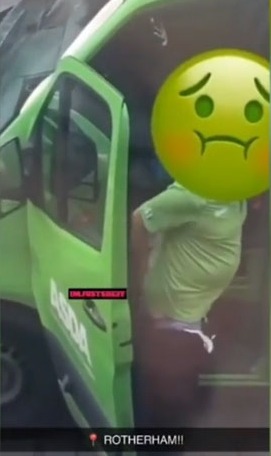 The delivery driver was spotted wiping his backside while completing his deliveriesCredit: ImJustSheff 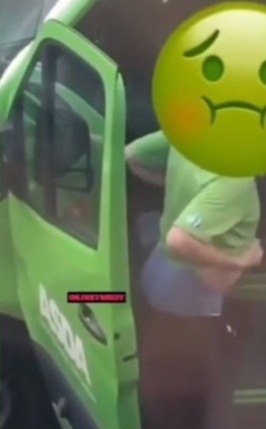 The man was caught short by a horrified customer in Rotherham on November 3Credit: ImJustSheff

The man even rips off some tissue conveniently stashed on the front seat and wipes his backside, while dropping off groceries in Rotherham.

The customer who captured the sickening video says that the unidentified Asda employee had defecated on the street before he was caught short.

They claim the desperate driver used the wad of tissue three times before dropping it on the floor outside of their home.

The incident is understood to have occurred on November 3 in the South Yorkshire town.

It is not clear where the driver headed to next, but he appears to continue in the direction of the van’s rear to carry on with his deliveries.

Locals have been left outraged by the Asda delivery driver using the pavement as a bathroom.

The man’s face was covered by the customer with an emoji to conceal his identity.

The disgusting footage also caused uproar on social media as Asda customers were left revolted at the driver’s blatant disregard for hygiene.

An Asda spokesperson said: ”The actions in this video fall far below the standards that we expect of our drivers and as soon as we were made aware of the footage we immediately launched an internal investigation.”

It is not the first time couriers have delivered customers more than what they bargained for.

An Amazon customer caught a driver on CCTV defecating outside of his home after dropping off a package.

One woman told how she spotted an Amazon delivery driver taking a number two in her garden after she feared he was trying to steal wood.

Another sickened shopper was horrified when an Ocado delivery driver dropped off a bag of POO with her food.