UFC announcer Bruce Buffer was hailed as a ‘fashion icon’ after sporting a stunning lilac jacket for his latest masterclass in presenting.

The 63-year-old was on hosting duties at UFC 257 and stole the show in the prelims thanks to his eye-catching floral number. 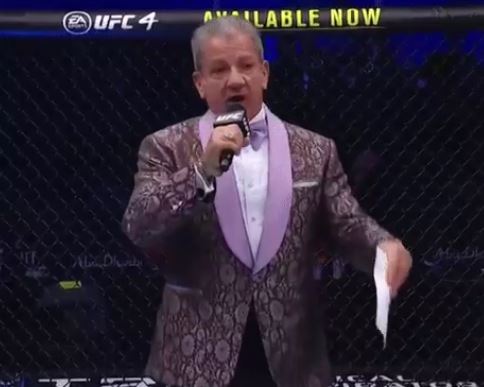 ‘Fashion icon’ Bruce Buffer in his floral outfit for UFC 257

Fans waiting for the main event of Conor Mcgregor vs Dustin Poirier picked out the Veteran Voice of the Octagon as the early headliner.

NerdyScienceGrl wrote: “I’m excited about the McGregor vs. Poirier fight tonight, but I get more excited about seeing Bruce Buffer’s suits.”

Kristijanku added: “When hasn’t @brucebuffer looked sharp, the dude is a fashion icon.”

Buffer is famed for his outfits – and there is even a Twitter account called Bruce Buffer’s Purple Jacket.

And it predictably joined in the fun as the man himself did the honours on Fight Island.

It wrote: “The purple jacket prince lighting up the city of luxury in a Lawless Lilac. Solid trim & bow tie leaving you lusting for a silky left hip turn into a loud, thunderous roar.”

Amd UFC chiefs weren’t to be left out, adding: “A historic night requires a historic fit. Bruce Buffer looking as impeccable as ever.”

Buffer had teased fans from his dressing room before the event began with a preview of his ‘It’s time’ catchphrase – and revealed he gets in the mood by listening to AC/DC’s Thunderstruck before hitting the octagon.

The American icon is the half-brother of fellow sports-announcing legend Michael Buffer.

The pair are business partners with an estimated combined personal net worth of £312million – Michael £305m and Bruce £7m.

But amazingly they didn’t meet until the late 1980s after Bruce saw his more famous sibling on TV and asked his father if they were related.