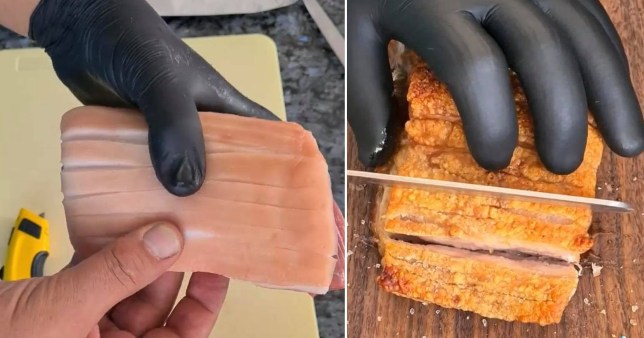 An Australian foodie, who loves cooking different meats, has shared his secrets to getting the crispiest pork belly.

Amateur chef Chris shared a TikTok tutorial of how to get the food nice and crunchy with three household items.

He revealed that the ‘perfect crunch’ requires rock salt, vinegar and an oven instead of a barbecue.

The content creator reveals the first secret is to prick the skin to give the ‘bubble effect’.

Chris then recommends using a blade to score the skin – which he says is an optional step.

Scoring the meat helps the heat to penetrate the fat as it bubbles through the slits.

Next, Chris places the meat in aluminium foil, wrapping it around to make a ‘boat’.

Then it’s time for Chris’s second secret – covering the stuff in No.2 rock salt.

The chef pours generous amounts of the salt which, he says, will extract moisture and not make it salty.

He then lets the pork cook on the middle rack in the oven at 180C for one hour.

But that’s not it, there are a few more steps to make the stuff its crispiest.

3 secrets for the Perfect Crunch! The ‘How To’. Butcher to kitchen bench to oven door😉#porkbellyrecipes #porkbelly #fyp #foodtiktok #pork #crackling

Once the pork has cooked with the salt on top, you have to get it out of the oven and remove the layer of salt using a wooden spoon.

Next, Chris brushes vinegar on the meat saying you won’t taste it.

He placed back the pork belly in the oven on the bottom rack for 25 minutes at 250C. 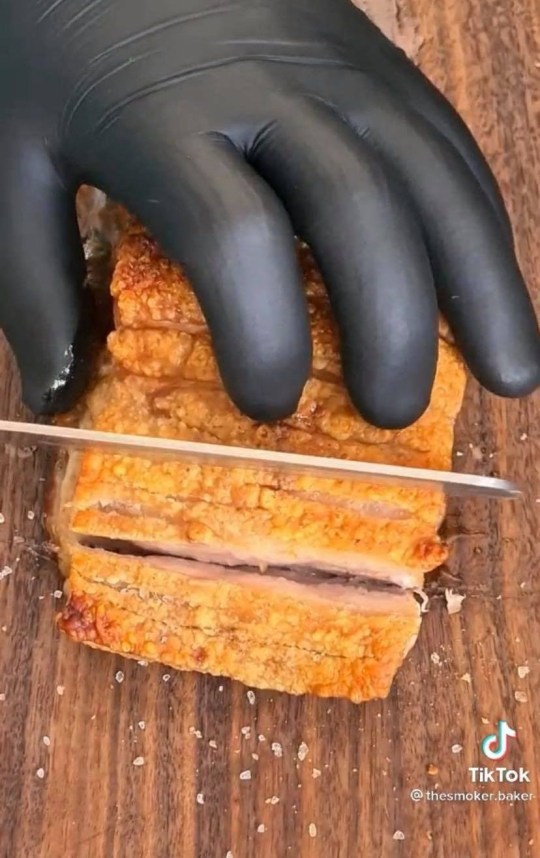 Though there were plenty of steps to follow, Chris’s video proved popular with followers, garnering more than 10 million views.

‘Wow okay, this is the proper way, people, I can confirm this works.’ wrote one person.

‘I did it and it was gorgeous,’ wrote another.

Others commented that it was too salty as the salt had managed to get into the meat.