LATE one afternoon in the dark, freezing rain of ­January, I was ­making my way home from the shops on my local high street.

Leaning into the wind, I passed the doctor’s surgery, a big, squat building not much better than a prefab. 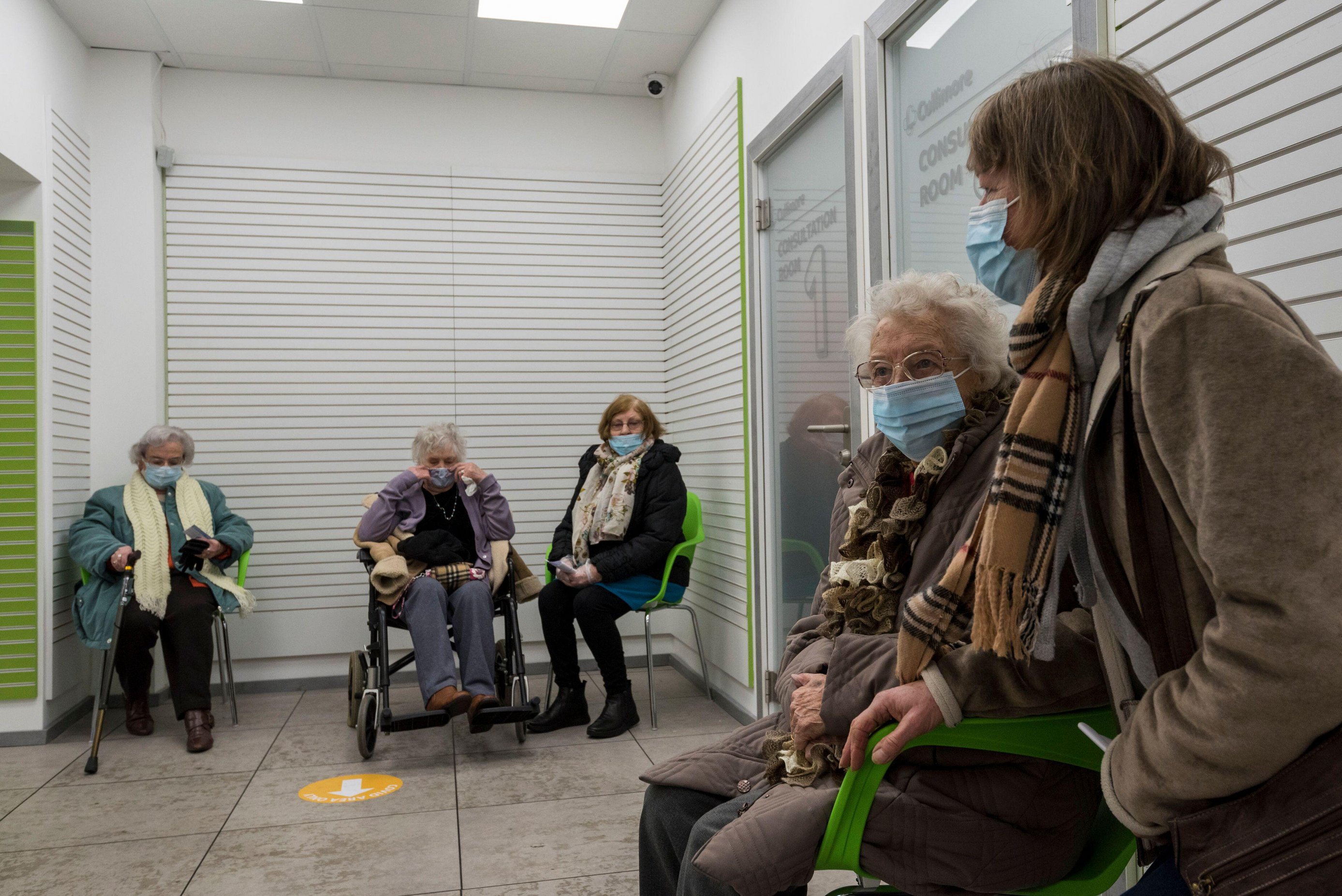 We have been reminded just how much we owe the older generation and how much they mean to usCredit: Alamy Live News

I blinked away raindrops to see a long line of perhaps 50 elderly people.

So, after months of desperate fingers-crossed talk of miraculous vaccines dreamt up by brilliant people the world over, this was what it all boiled down to — a line of elderly people braving the ­elements on a miserable, wet afternoon.

The sight stopped me in my tracks. I was moved — I think it was something about the sheer appetite for life in ­evidence.

That terribly posh 91-year-old bloke CNN interviewed outside London’s Guy’s Hospital seemed to have spoken for them all when he’d said: “There is no point dying now when I’ve lived this long.”

His name was Martin Kenyon, a ­pensioner all the more­ ­magnificent for squeezing in a couple of grumbles ­alongside that superb summation of why he wanted the vaccine.

“Couldn’t damn well park my car,” he harrumphed, before telling the American crew how he’d then “gone orf and had a rather nasty lunch”. Brilliant.

In a marvellous, if cruelly twisted, way the past year has seen the elderly return to their rightful place — at the head of the queue and even in charge of things.

Many we have lost before their time, so it now feels all the more appropriate that the most powerful man in the world is one of their number — President Joe Biden is as old as a conker tree and, at this moment, feels exactly like the kind of mighty oak we need to shelter beneath. 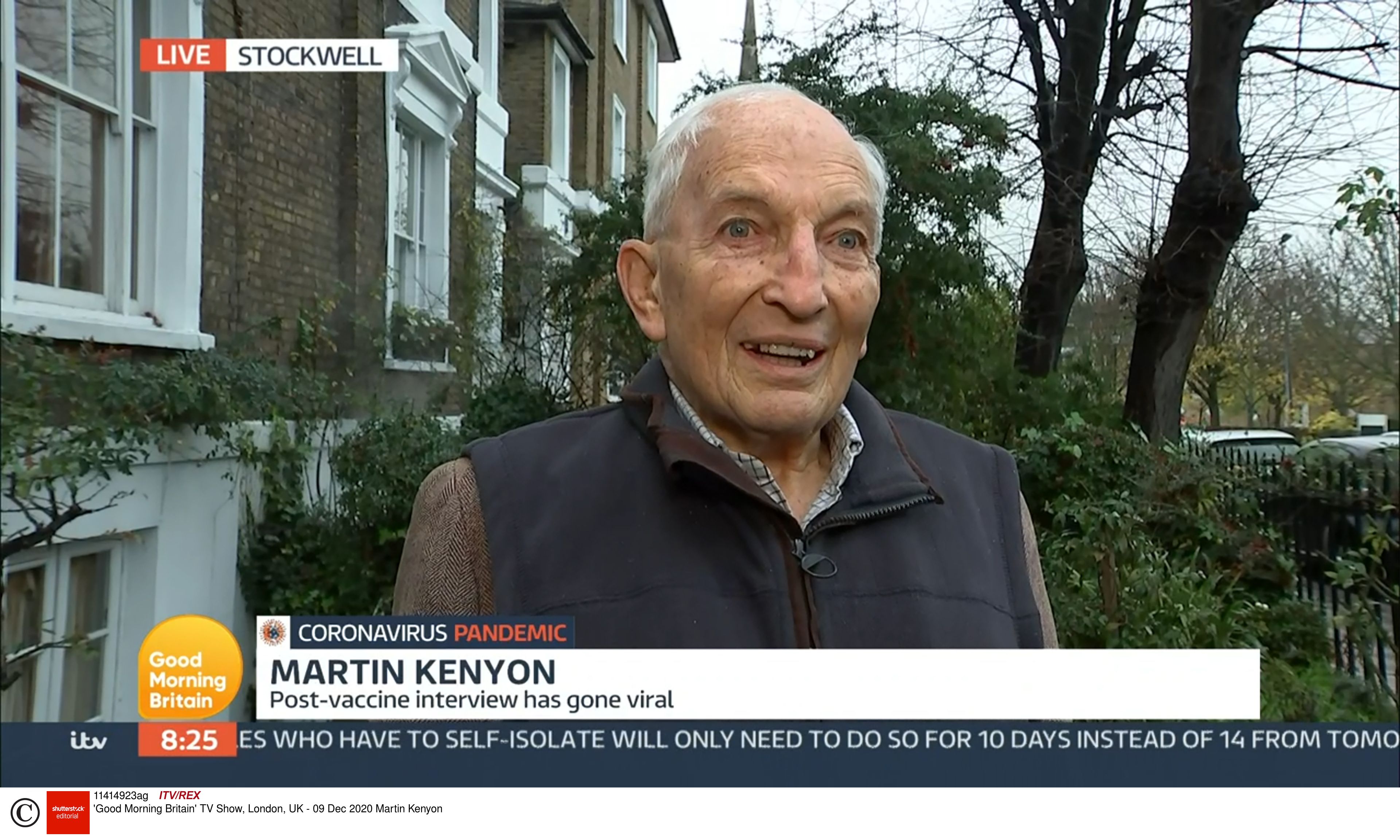 Martin Kenyon is a ­pensioner all the more­ ­magnificent for squeezing in a couple of grumbles ­alongside that superb summation of why he wanted the vaccineCredit: Rex Features

But even he might have been outshone in the septuagenarian stakes at his own inauguration, by his sometime Democrat rival Bernie Sanders.

This formidable gentleman turned up dressed like he’d stopped off on the way from his allotment to the post office. Yes, the lunatic Donald Trump has been well and truly chased out of the asylum, and wiser men have taken the reins.

A long way from Washington DC, I got to speak to a GP in Moreton-in-Marsh, in the Cotswolds. He told how brilliantly his Primary Care Network of doctors’ practices had done with getting the ­vaccine out to patients.

Dr Hywel Furn Davies said hundreds of volunteers had organised it so thousands of elderly ­people from across their huge, rural patch could get vaccinated.

He told me it was ­easily the highlight of his long doctoring career. Something else he said hit home too: “It’s been such a joy to see all these ­people in their eighties get themselves here.

“This is the generation that created the NHS and it’s such a privilege now to deliver this vaccine to them. They deserve it.”

Thanks to everyone from Captain Tom to President Biden, and every mum and dad and gran and grandad we haven’t hugged or even seen for a year, it feels like we’re ­entering a new age of the aged.

We have been reminded just how much we owe them and how much they mean to us.

The rest of us can only hope that when we are in their shoes, we have done enough to deserve being valued just as highly.

I’M a bit concerned about Zoe Ball. Out for a walk this week, I bumped into Richie Anderson, the travel presenter on Zoe’s BBC Radio 2 Breakfast Show.

I know Richie because we support the same football team, so we had a quick, socially distanced chat before I went on my way. 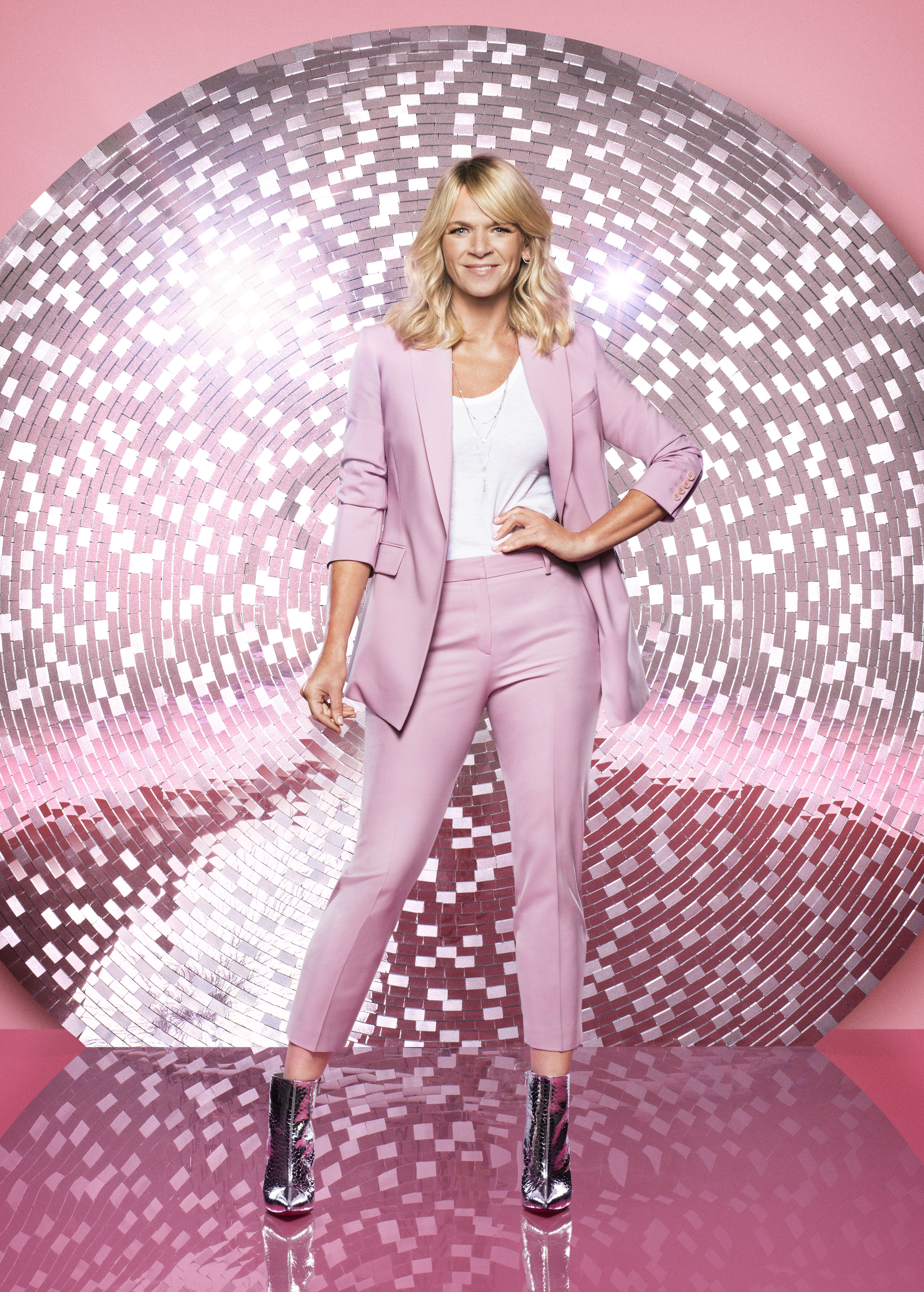 Richie mentioned he’d seen me and Zoe told him: ‘He’s very attractive to women – he’s handsome and funny and charming’Credit: WARNING: Use of this copyright image is subject to the terms of use of BBC Pictures’ Digit

I thought no more of it until the following morning when I was sent an extraordinary recording of an exchange between Richie and Zoe on that day’s Breakfast Show.

Richie mentioned he’d seen me and Zoe told him: “He’s very attractive to women – he’s handsome and funny and charming.”

I went to my bathroom cabinet, got out some cotton buds and gave my ears a thorough clean. Then I took my phone to a quiet room and had another listen. Yes, she definitely said it.

It came in the post from South Shields. It was a small, unsigned note written in shaky, wibbly-wobbly, granny-style writing.

It read: “I want to kiss you all over, you big cuddly teddy bear.” My, how I blushed.

So someone’s nan on Tyneside was my only admirer for two decades – until Zoe Ball doubled my number this week. I do hope she’s OK. If you see her, say hello.

EVERY now and then I interview someone whose story keeps me awake at night.

So it has been this week with the case of Stefan Thomas, a tech entrepreneur living in San Francisco. Yes, I know – the words tech and entrepreneur bring on a yawn in me, too. 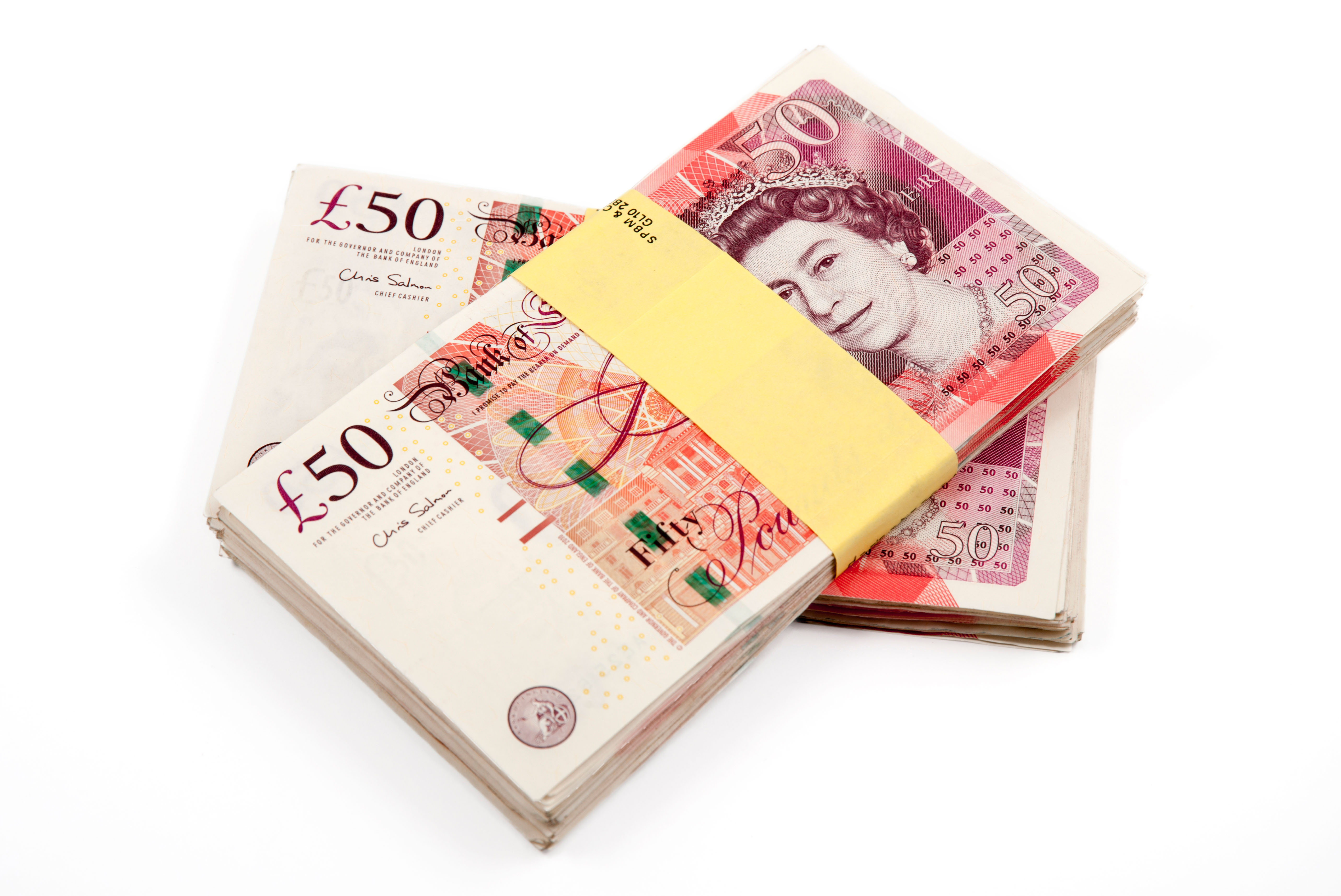 The whole experience has taught Stefan, he insists, that he is not defined by what is in his bank accountCredit: Alamy

But Stefan is the guy who has the most horrifying I-forgot-my-password story. More than a decade ago he earned 7,002 bitcoins for some animation work he did. At the time, they were worth just a few dollars each and he stored them in a digital wallet.

It wasn’t until they’d risen in value to around £100,000 that Stefan realised he’d forgotten the password to a small hard drive, known as an IronKey, to unlock his account.

He’d written it down but couldn’t find the piece of paper. We’ve all been there, but in this case there was no “Forgot your password?” option for Stefan to click on.

Furthermore, this particular high-security stick only gives you ten attempts at guessing the password. Thereafter, it self-destructs, taking whatever was on there with it.

Stefan has tried eight incorrect passwords – two more and all his bitcoins disappear for ever. They are now worth around £180,000,000. Can you imagine?

And Stefan says he feels lucky. The whole experience has taught him, he insists, that he is not defined by what is in his bank account. Now, that’s what I call positive thinking.

MID all the ritual pomp and circumstance of the presidential inauguration, I loved the moment when the announcer, with grave portentousness, introduced one Lady Gaga.

It sounded absurd – but she looked and sounded wonderful. 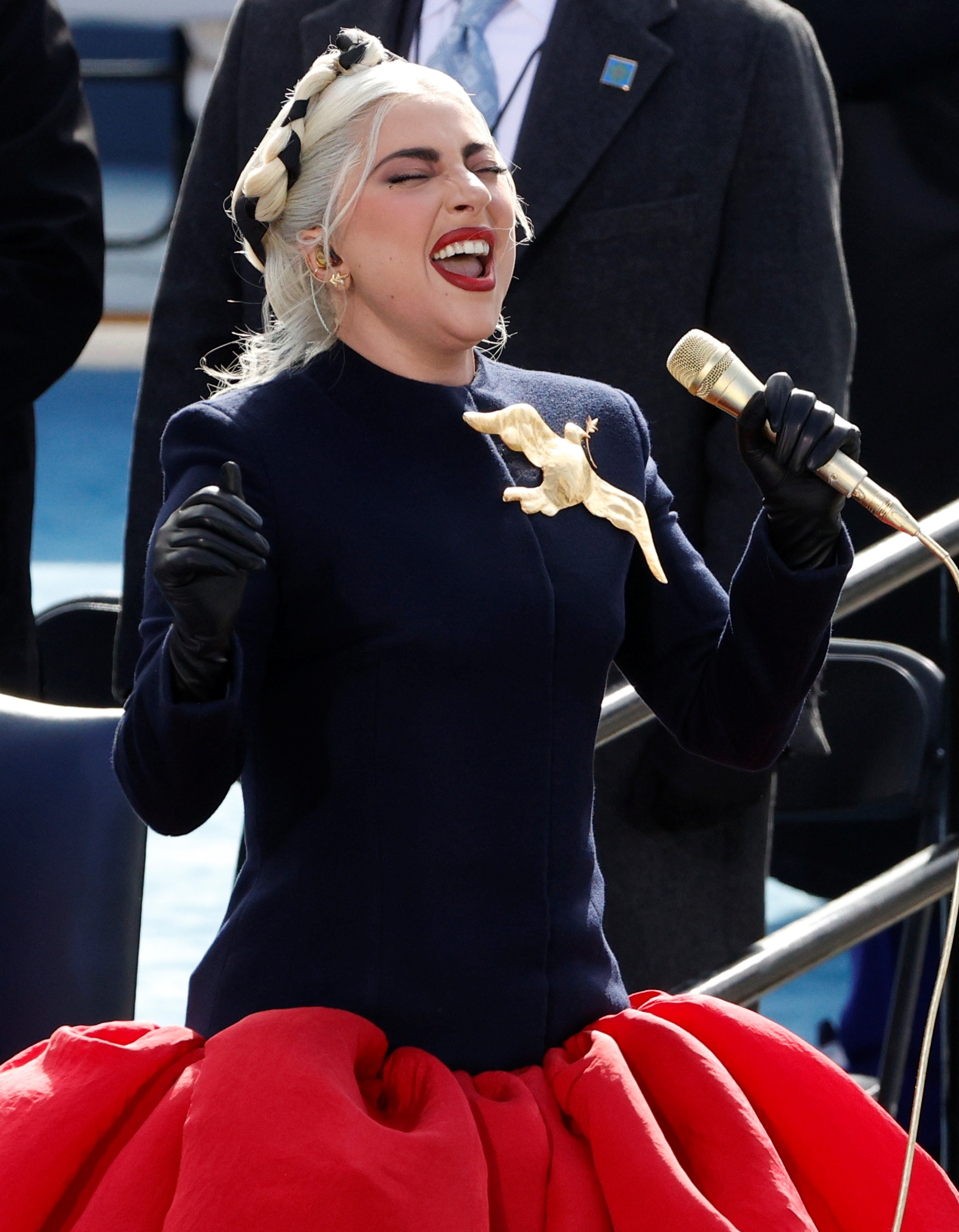 WAS always a massive meat eater. My colleague on ITV, Andy Townsend, once told me over dinner in a steak restaurant in Johannesburg that dining with me was like going for tea with Fred Flintstone.

To be fair, I did have my head in a veritable mountain of dead animal on my plate at the time. Then, filming in Istanbul six years ago, I had to take a lamb for slaughter and go on to eat it. I never ate meat again and I’ve not really missed it at all. 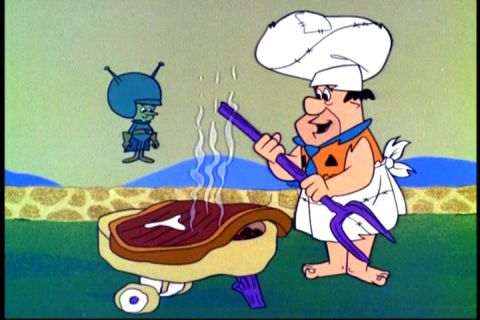 I’m still a Flintstone after all – just a vegetarian one

Well, I’ve not missed the kind of good-quality meat that actually looks like flesh. But I do miss the unhealthier stuff something rotten.

What I wouldn’t give for a decent vegetarian pork pie. That said, the meatless sausages are getting better all the time – Greggs’ vegan sausage roll was a game-changer.

And probably the highlight of my Christmas was a box of very fine veggie Scotch eggs a mate sent me from a place in County Durham. And this week marked another milestone – a pie I really could do business with.

You can get cheese- and-onion pies but they lack something. I used to get one before West Brom games while picking up a chicken-and- mushroom pie for Frank Skinner, who generally arrived later than me.

How covetously I sniffed at it. But this week both my feet left the ground in jubilation when I came across Pukka’s vegan chicken-and- mushroom pie in Sainsbury’s.

I bought two – for me and my partner. But mine tasted so good, I ate hers as well – leaving pastry and sauce all over my face. She said I was a caveman. So, I’m still a Flintstone after all – just a vegetarian one.