A SHAMELESS driver was branded a “d**khead” after parking a £157,000 supercar across TWO disabled bays.

The 204mph McLaren 570GT – which did not have a disabled badge – was pictured straddling the two spaces at a shopping centre in Melbourne, Australia. 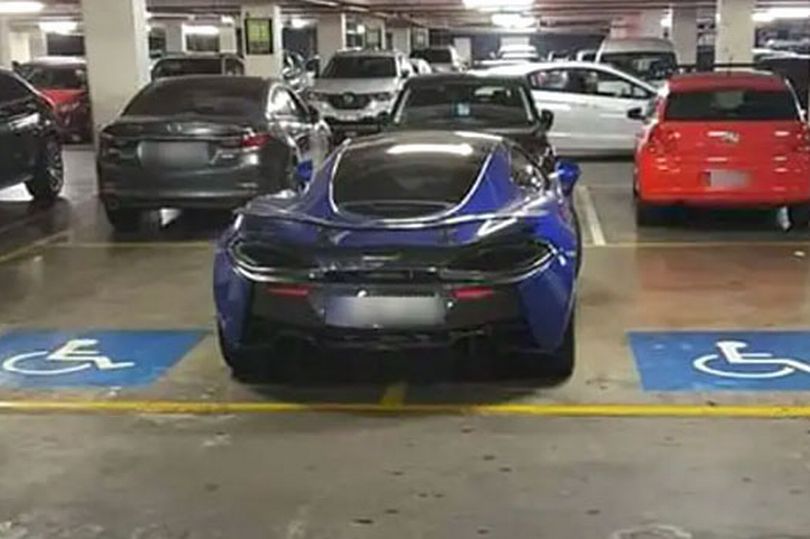 The 204mph McLaren 570GT – which did not have a disabled badge – was pictured straddling the two spaces at a shopping centre in Melbourne, AustraliaCredit: Australian Disability Parking Wall of Shame/Facebook

Another picture showed the blue Mclaren parked very close to a black BMW in one of the bays.

A witness claimed the owner was a parent who struggled to open to the back door to get a child inside.

The photos sparked fury after they were posted on a Facebook page called Australian Disability Parking Wall of Shame.

A user who uploaded the images on Sunday said: “This d**khead: 1. Parking in a disability spot when not disabled.

“2. But also having the audacity to park in 2 DISABILITY spots and blocking in another car who for all they know have someone in a wheelchair that now can’t get inside their car.

“Just to save their precious McLaren. Absolutely unbelievable, they’ve been here for a while too as someone’s left a note on their windscreen.”

A later update added: “At 5.30pm they still hadn’t left and an angry note was left on their windscreen and sushi lol.

“Car Park guy came out trying to find the owner, it’s believed they’ve dumped it all day and aren’t even in the shopping centre.

“They’re trying to get it towed.”

One said: “The very definition of selfish and stupid. All that money and no sense.”

Another said: “I reaaaallly hope it got towed!”

Security at the shopping centre told Yahoo News Australia they were not aware of the incident.

In October, a white McLaren 570GT was written off after a bizarre smash with an Audi that flipped over at a Sainsbury’s car park in Kent.

And last August, a bright pink McLaren 570GT was destroyed when the driver lost control in a 20mph zone in central London.