A MUM has revealed how she got the ultimate revenge on a scammer who hacked into her Amazon account and spent over £1,000.

Taking to TikTok, her daughter Haley Smith explained how the crook had ordered $1,700 (£1,250) worth of Apple Watches on her account, and sent it to her address.

Haley Smith’s brother dressed up as a FedEx delivery driver and delivered an Amazon box full of dog poo when her mum’s account was hackedCredit: TikTok/@haley.ps 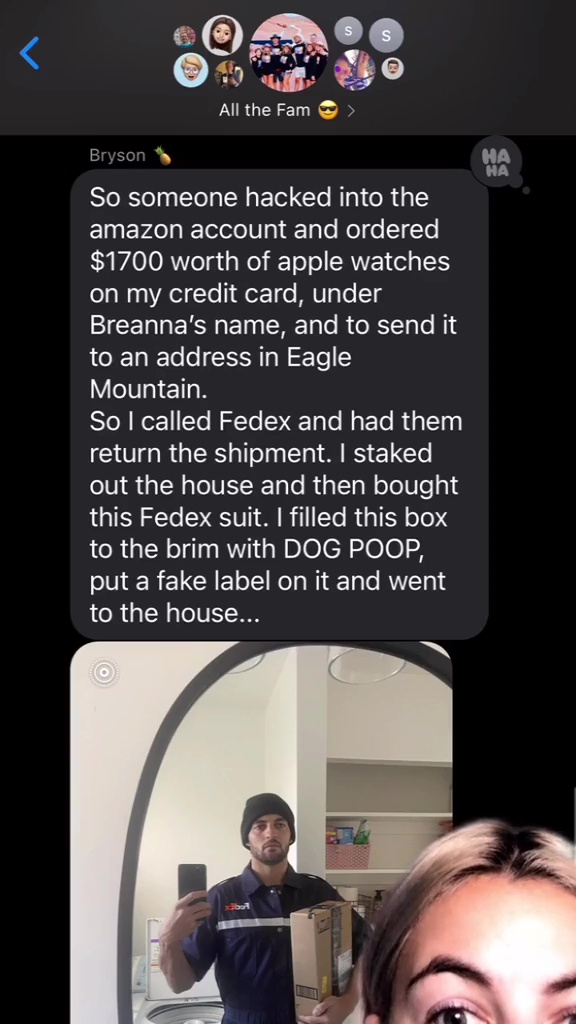 She shared the story on TikTok where it has received over 10 million viewsCredit: TikTok/@haley.ps

Haley shared the text she had received from her brother Bryson, explaining: “I got this text from my brother and he said someone hacked into my mom’s Amazon account and ordered $1,700 worth of Apple watches with his credit card using my sister’s name.

“And then they sent it to an address in Eagle Valley which is 45 minutes from my parents’ house.

“So he cancelled the order and staked out the house and bought this FedEx suit and then he got an Amazon box and filled it full of dog poop, and he made a fake label and put it on it and delivered it to the house.”

The video has since gone viral, receiving over 10 million views and thousands of comments from viewers applauding their ‘genius’ revenge.

Commenting on the video, one wrote: “The devil works hard but your brother works harder.”

“This is so iconic”, added another, while a third said, “BROTHER OF THE YEAR!!!!”

Haley also revealed that her brother had filmed his interaction with the woman at the address, but she had since denied placing the order and so Haley has removed the videos.

She revealed that the order is currently under investigation by Amazon, although they have not been able to get that money back.

First Thing: pressure piles on Joe Biden to speed up visas for Afghans | US news