A RUSSIAN “Popeye” has been warned he faces death unless he has lumps of hardened petroleum jelly from his bulging fake biceps removed.

Ex-soldier Kirill Tereshin, 25, used injections to look like a superman but is now paying the price which may include losing the use of his arms, or worse.

Kirill Tereshin, 25, was told he faces death unless he has his fake biceps surgically removed 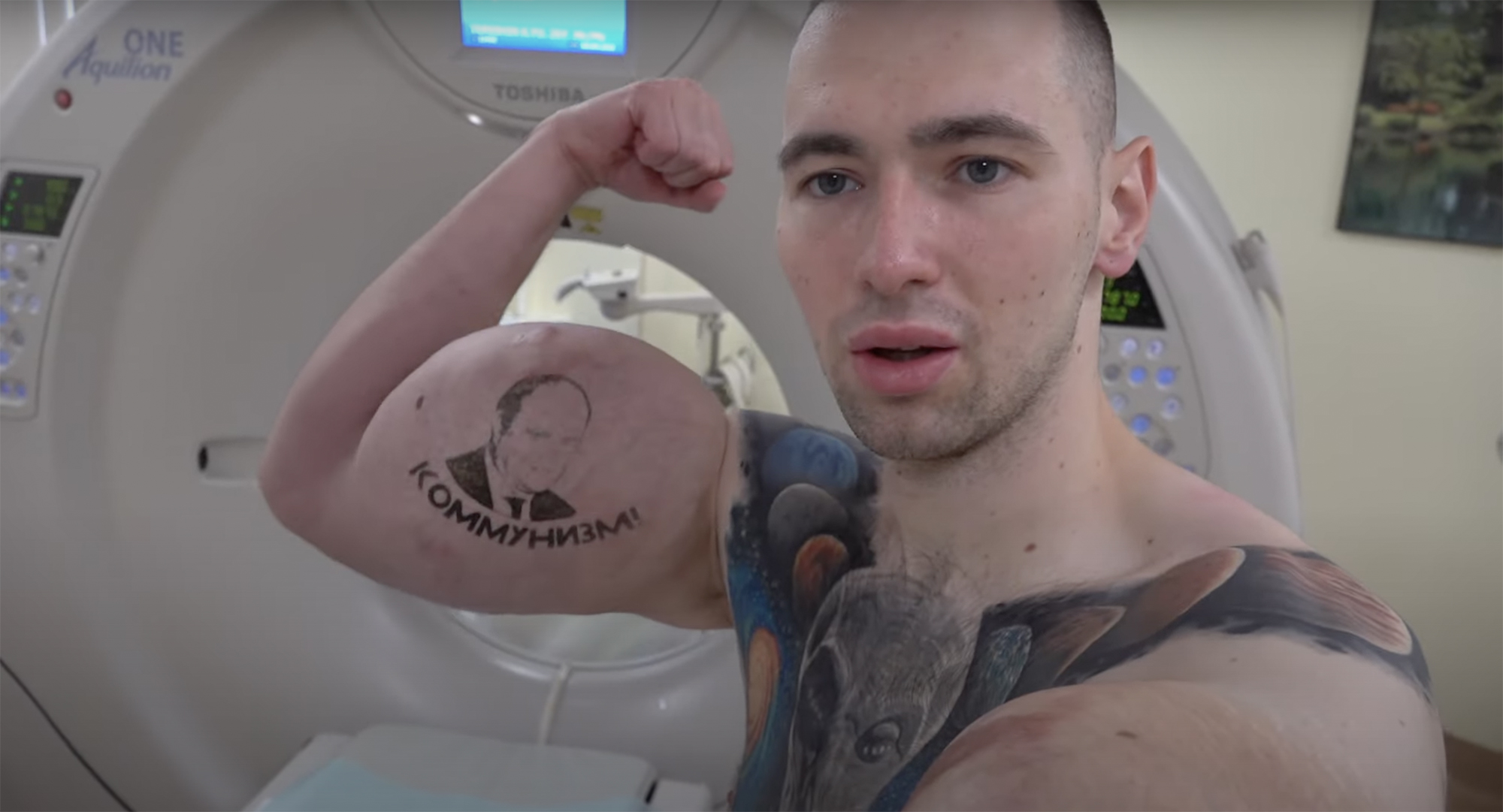 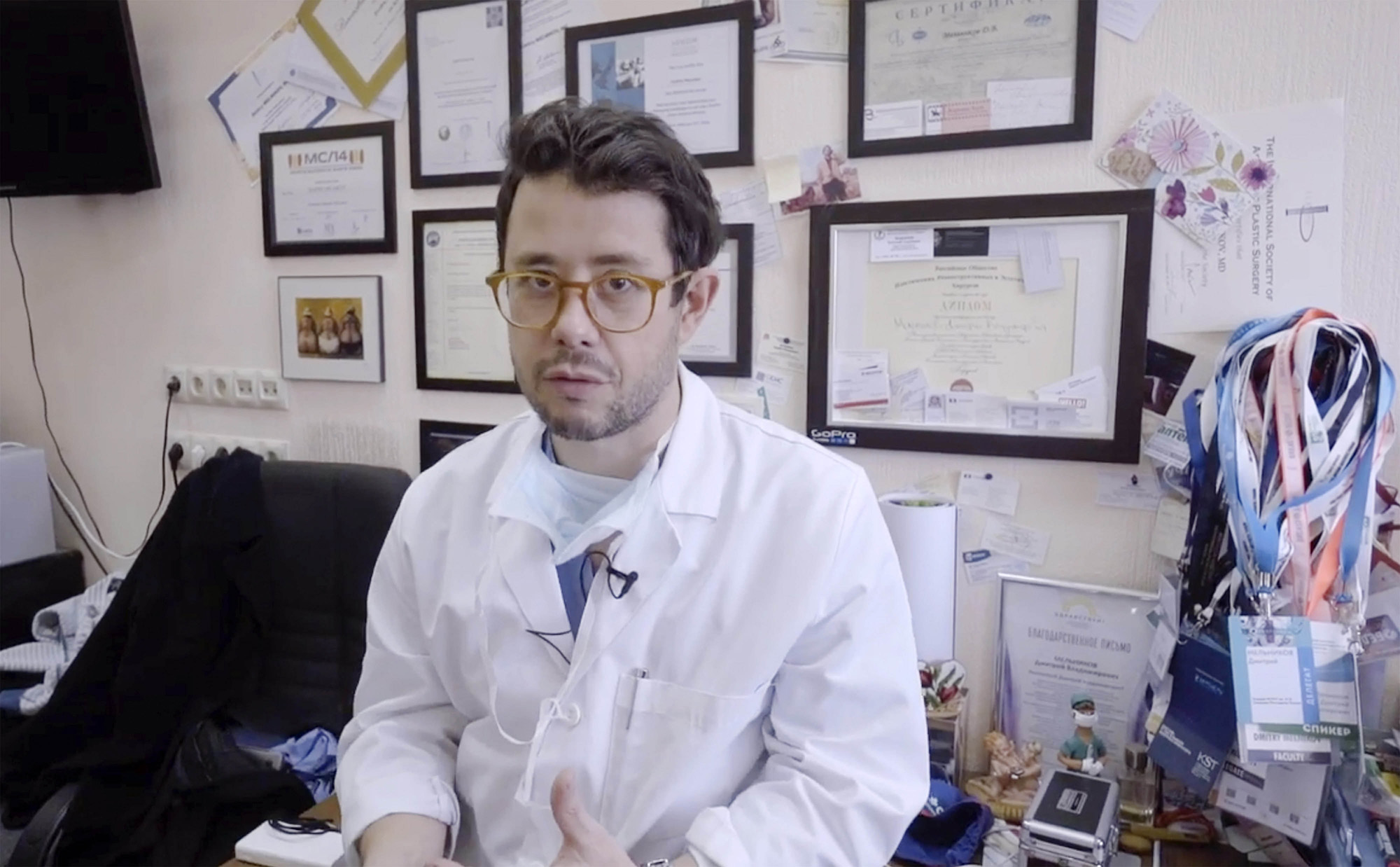 He has already had his fake triceps removed but now faces the first operation to get rid of dangerous giant implants from his biceps.

Surgeon Dmitry Melnikov warned him bluntly: “The risk of complications in this case is very high. But inaction will not help the patient.

“A toxic substance in the body long term can complicate the kidneys and lead to death.”

A video shows Tereshin – nicknamed Bazooka in his homeland –  undergoing a CT scan ahead of surgery in Moscow.

His imminent operation will remove the hardened petroleum jelly he had injected into his left arm.

He is shown bare-chested with a new tattoo on his bulging arm – of his hero Communist leader Gennady Zyuganov, 77.

“Soon I will have a very complicated, hard third surgery,” he said.

He admits he has to “get rid” of his self-inflicted “nightmare”.

He confessed: “I bulked up my arms when I was 20 due to my own stupidity. I did not think about the consequences.”

Tereshin was persuaded to “save his life” and remove the implants by famous Russian WAG Alana Mamaeva, 33, a campaigner for victims of botched plastic surgery, who was formerly married to Russian football star Pavel Mamaev.

“I am very lucky that there are doctors who took me on,” he said.

“God forbid something happens to this nerve and I cannot move my arm.

“I really worry about this. I am very afraid….I should have thought about this earlier, I know. I blame myself, I know I’m guilty.”

Mamaeva said she “had to help” Tereshin remove his “horrible, horrible” implants.

Doctors warned Tereshin he risked losing the use of his arms after he injected himself with three litres of the petroleum jelly to create cartoonish, bulging muscles, and shared the footage with his 350,000 Instagram followers.

Tereshin, from the city of Pyatigorsk in the Russian region of Stavropol Krai, had the corrective surgery delayed by nearly a year due to the coronavirus pandemic.

“I’m only 24, and my immune system is so far coping with this inflammation, but I really do not know what will happen next,” he said.

“That is why I started the surgeries to get rid of this nightmare.”

Tubes drained a build-up of fluid from Tereshin’s arms after doctors removed masses of dead muscle that has been poisoned by his bootleg bulking method.

But one commenter told him: “Set some money aside for bionic prosthesis? This will not end well.”

Another said: “You created troubles for yourself, Kirill, I’m sorry for you.

“You could have a quiet and healthy life, you’re stupid.” 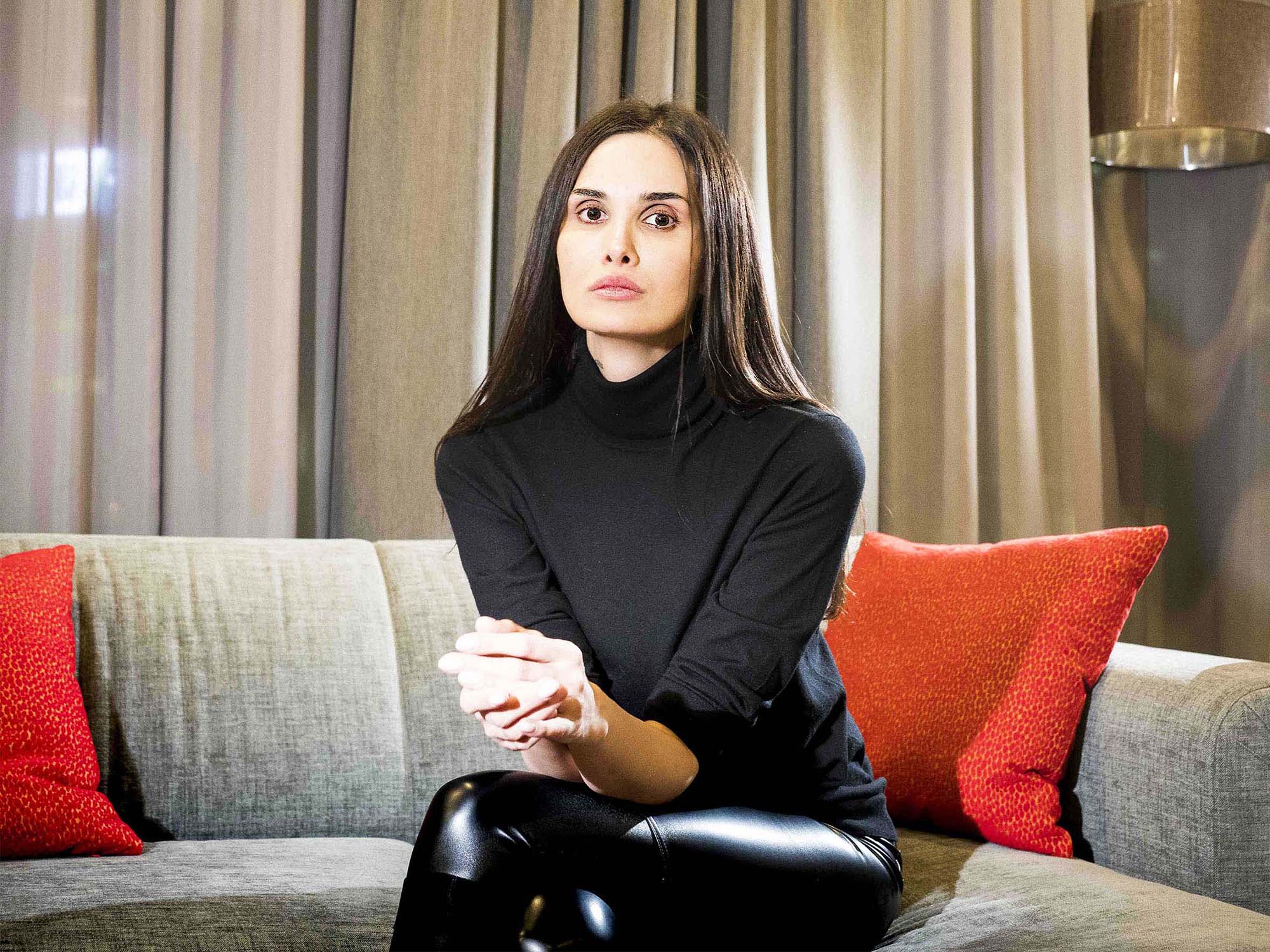 Russian WAG Alana Mamaeva, 33, is a campaigner for victims of botched plastic surgery 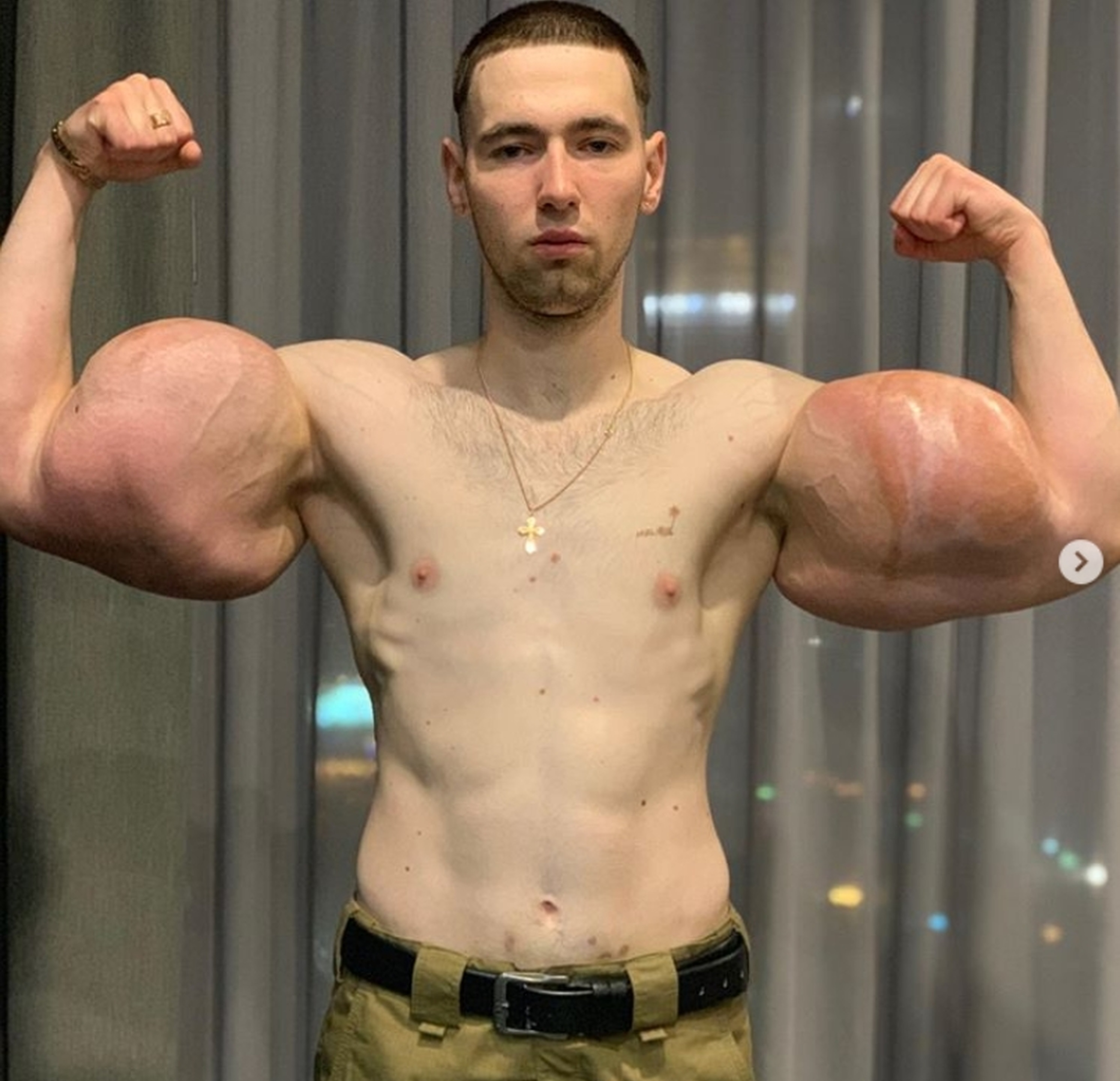 Tereshin injected his biceps with three litres of petroleum jelly 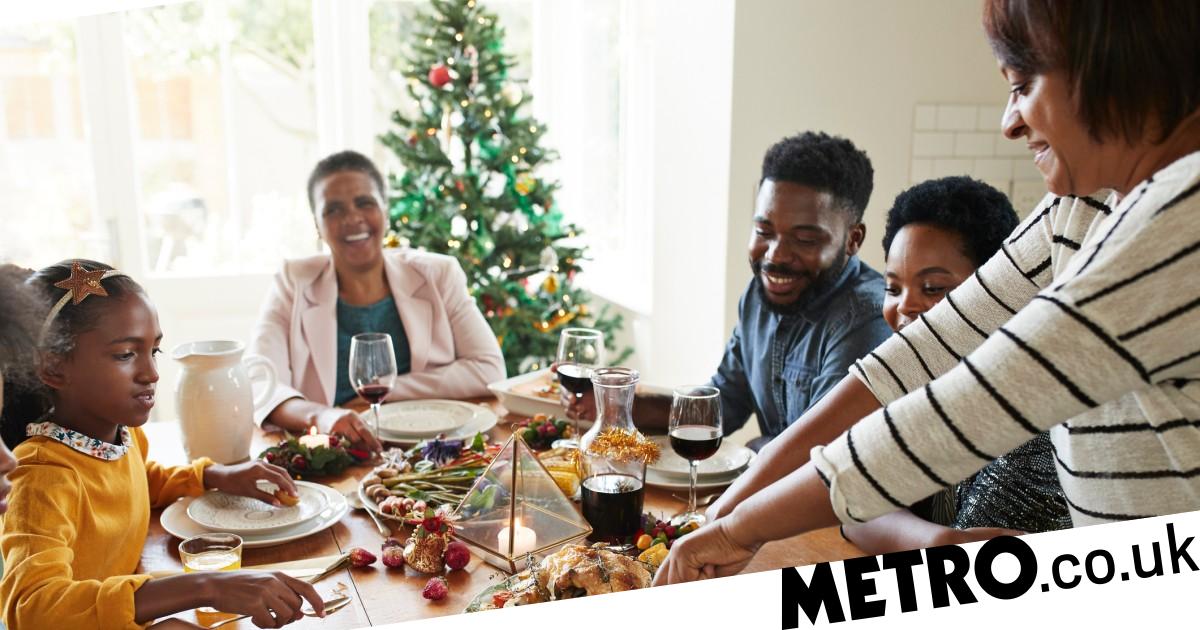