SETH ROLLINS tasted victory over Roman Reigns at the Royal Rumble but failed to take home the Universal Title.

The Architect was announced as the shock Rumble opponent for his former Shield brother earlier this month by WWE official Adam Pearce. 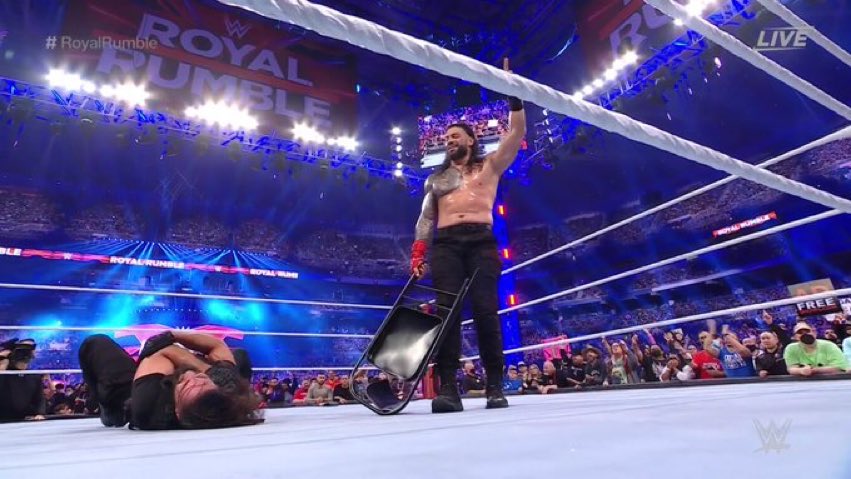 The champ then destroyed Rollins with a steel chair after the matchCredit: BT Sport

And he has used the past couple of weeks to get into the head of the Tribal Chief – including earning the right to get The Usos barred from ringside.

That continued pre-match as Rollins rolled back the years to enter the arena to the Shield’s old theme music while decked out in their iconic riot ring attire.

The challenger was on top during the opening exchanges but he was soon brought back down to earth by a huge right hand.

But he once again got back on top and had the crowd on their feet when he produced a Shield-like power bomb on Reigns through the announcers table.

A buckle bomb was then followed by the stomp – but the champ kicked out at two-and-a-half.

It did not take long for Reigns to recover, and he came close to picking up the win after landing a Superman Punch.

But Rollins managed to counter a spear into a pedigree but he was still not able to put the Big Dog away.

He attempted to go for another stomp but he was caught by the title holder and he was soon on the receiving end of a huge spear.

But the mind games continued as Rollins laughed at the champ and tried to go for a Shield fist bump, only for Reigns to lock in the guillotine choke, but Rollins was able to get to the ropes.

Despite the ref’s pleas, Reigns refused to let go and was disqualified as he screamed ‘He won’t allow me to let go’.

Rollins eventually had his hand raised – but a title cannot change hands via a DQ – so the champ left with the championship still around his waist.

And just to cap off a miserable evening for Rollins, Reigns unleashed a vicious assault on him with a steel chair afterwards to leave him laying.