MARJORIE Taylor Greene posted her father has passed away due to melanoma, complete with a thread detailing how difficult her first few months of Congress have been.

“My father passed away last night after a hard fought battle over the past 3 months with Melanoma,” Green tweeted. “Most people don’t know how tremendously difficult my first three months of Congress have been.” 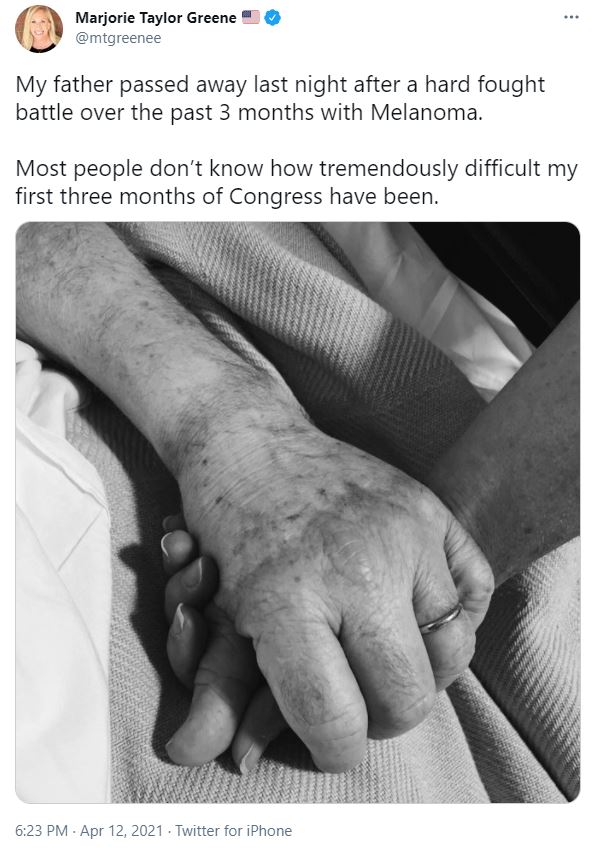 In the long Twitter thread, Greene took the time to allude to her father’s passing as just another pain while she feuded with attacks on her character.

“While I have endured the flaming arrows fired daily at me while I have been fighting against the left’s war on our freedoms in Congress, my soul was torn apart watching my Daddy suffer and slowly die with cancer.”

“We don’t win every battle we fight, but my amazing father won the war, and he taught me how to withstand the greatest enemy,” she continued. “My Dad was the forgotten American man that President Trump worked so hard for.”

“My Dad grew up with very little, but with a faith in God and dreamed the Great American Dream,” she wrote in the next tweet. “He worked every job from riding a bike delivering newspapers, to factory work, to construction work, and all in between, while trying to go to school.”

Greene wrote her father was drafted at 20 to serve the Navy in Vietnam.

“He lost friends there just like many did. He met a girl after his service, when he went back to college, married my Mom, and had a little girl named Marjorie.”

The Georgia representative said her dad couldn’t finish school but instead started a construction company “that put a roof over our heads, fed us, clothed us, and Dad provided our families every need.”

She continues on her thread, saying she spent plenty of time growing up fishing and driving with her dad, adding “the greatest thing my father’s hands ever did was they taught me how to pray.”

“My Dad’s big strong hands put my tiny hands together when I was young and introduced me to God,” she continued “Last night, the Mighty Hands that formed and created my Dad’s hands, and the wonderful man that my father is, lifted him up and took him home to heaven.”

“Today we rejoice that his pain is gone and he has been set free!”

She echoed that final sentiment, saying she too was set free knowing her father is in heaven.

“Thank you all of you who support me. Soon I will be back. And this time, I’ll be all in because my heart is no longer broken now that my Daddy has been set free.”