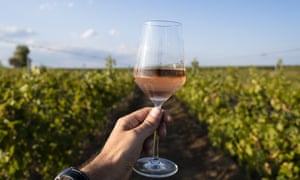 Wine’s environmental impact starts before grapes get anywhere near a bottle.

For many of us, the question “how green is my wine?” won’t go much further than the colour of the bottle. Wine is a natural product, after all, and vines must surely absorb carbon dioxide through photosynthesis? The reality is rather more complicated, but raising your glass doesn’t have to give the planet a hangover.

Intensive agriculture, crop spraying and the creation of vineyard monocultures are all potential issues before grapes get anywhere near a bottle. Then there’s the use of water and energy in the winery, what to do with the waste it generates and, of course, the carbon footprint created by packaging and then moving the finished product, often to the other side of the world.

“Sustainability is multi-faceted, so it goes way beyond what happens in the vineyard,” says Dr Greg Dunn, head of the wine division at Plumpton College. “It’s not just about the environment either, there is also economic and social sustainability to think about.”

“When someone is choosing a bottle of wine, they are confronted with all of these different facets, so the best starting point is to make sure the wine is part of a certified sustainability scheme in the country it is produced,” he says.

“The consumer has never had more power to buy into companies they can believe in – particularly around sustainability,” says wine industry consultant Richard Siddle.

Cutting carbon
With the help of the Carbon Trust, Australia’s Lindeman’s is now certified as carbon neutral in Europe according to the globally recognised PAS 2050 standard. The status entails a commitment to cut its footprint by improving the way it works – from introducing lighter bottles to fully recyclable packaging, using less water, better refrigeration technology and renewable energy.

As part of its journey towards operationally carbon neutral, the company is also currently offsetting – in effect, buying “credits” to pay for carbon-consuming projects elsewhere in the world.

“We are committed to reducing our carbon footprint, but recognise it’s going to take time,” says Michelle Brampton, managing director for Treasury Wine Estates, parent company of Lindeman’s. “While we make efforts to improve the way we do things and reduce our impact on the environment, we are using carbon credits to help balance it out.”

The offsetting includes a solar power project in the Philippines, wind farms in India and reforestation in both the Amazon Basin and here in the UK, where many of the trees will be planted alongside schools.

“I’m not necessarily against offsetting, so long as it is done properly,” says Dunn. “Personally, I see it as a potential route to reforestation.”

“There’s a big debate around offsetting,” says Siddle, “but the reality is that these projects benefit communities outside the geographical area in which a company usually operates and that has to be a positive for the world.” 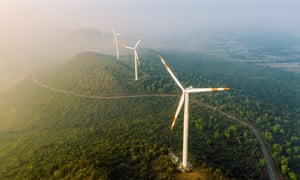 Using renewable energy is one of the many efforts Lindeman’s is making to reduce its impact. Photograph: Amith Nag/Getty Images/500px

Lightweight champions
Any gauging of a wine’s green credentials cannot ignore the bottle. The manufacture of glass and its transport are usually the single biggest contributor to a wine’s carbon footprint. A regular bottle can weigh as little as 330 grams to do its job, yet some can come in at almost a kilo. Sparkling wine does require heavier bottles, due to the pressure inside, but for still wines it is largely cosmetic.

There’s a lingering perception that the heavier the bottle is, the better the wine, but that’s for the birds. Some of the most expensive wines in Australia and New Zealand now come in lightweight bottles. And the doyenne of the London critics, Jancis Robinson now deploys a set of scales to weigh individual bottles before tasting them, to help her readers make a sustainable choice.

“The wine industry is a very traditional one,” says Dunn, “but it needs to change, because bottles are a big source of carbon and even making new ones from recycled glass takes a lot of energy.”

Lindeman’s already uses bottles that are no heavier than 420 grams, it is looking to go lighter still, but the bigger prize could be a move away from glass altogether.

Future formats
“From our work with the Carbon Trust, we found that per 750 millilitres, bag-in-box wines had a carbon footprint around 40% lower than the glass bottle equivalent,” says Brampton.

The brand already has a bag-in-box range in the Nordic countries, and is planning to roll it out in the UK this year.

Expect to crack open more of your wine in the future too – from a can. Though the manufacture of aluminium is carbon intensive, the resulting product is potentially infinitely recyclable. It also avoids “light strike” (where rays damage the wine), weighs less, is much easier to pack, and chills more rapidly.

“If someone believes a product is more sustainable, then there’s evidence that they will choose it, but whether they are prepared to pay more for it is another matter,” says Dunn. “Having said that, we can see the world is changing and so is the wine consumer.”