A RAGING digger-driver went on a bulldozing rampage, leaving a £700,000-plus trail of destruction.

He smashed through a series of portable cabins at a metal recycling plant with the terrified staff apparently still trapped inside.

The digger driver left a £700,000-plus trail of destructionCredit: The Sun 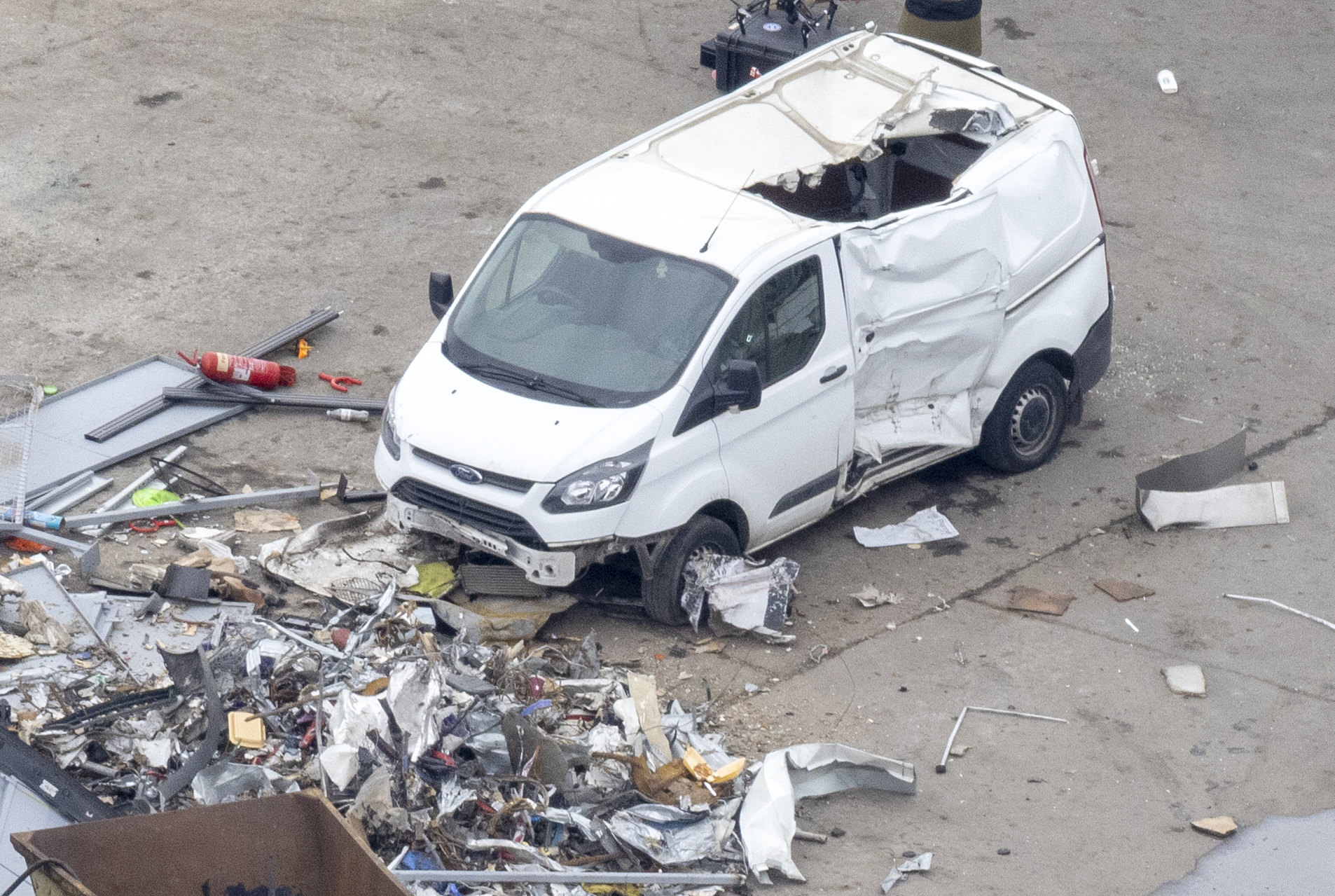 This white Ford Transit van was said to have been ‘thrown around like a Dinky toy’Credit: The Sun

And then he used the yellow machine to flip over a fully loaded 44-ton lorry.

A white Ford Transit van was said to have been “thrown around like a Dinky toy” and a gaping hole was ripped through its roof.

A weigh-bridge was also left battered in the wrecking spree.

Four cabins were shredded and heaps of debris were seen strewn over the yard of Paynes Metal Recycling in Iver, Bucks.

The articulated Scania lorry, which has the business’s name across its rear, was photographed on its side with the excavator next to it.

Piles of metal ripped from the lorry were still lodged in the claw of the digger. 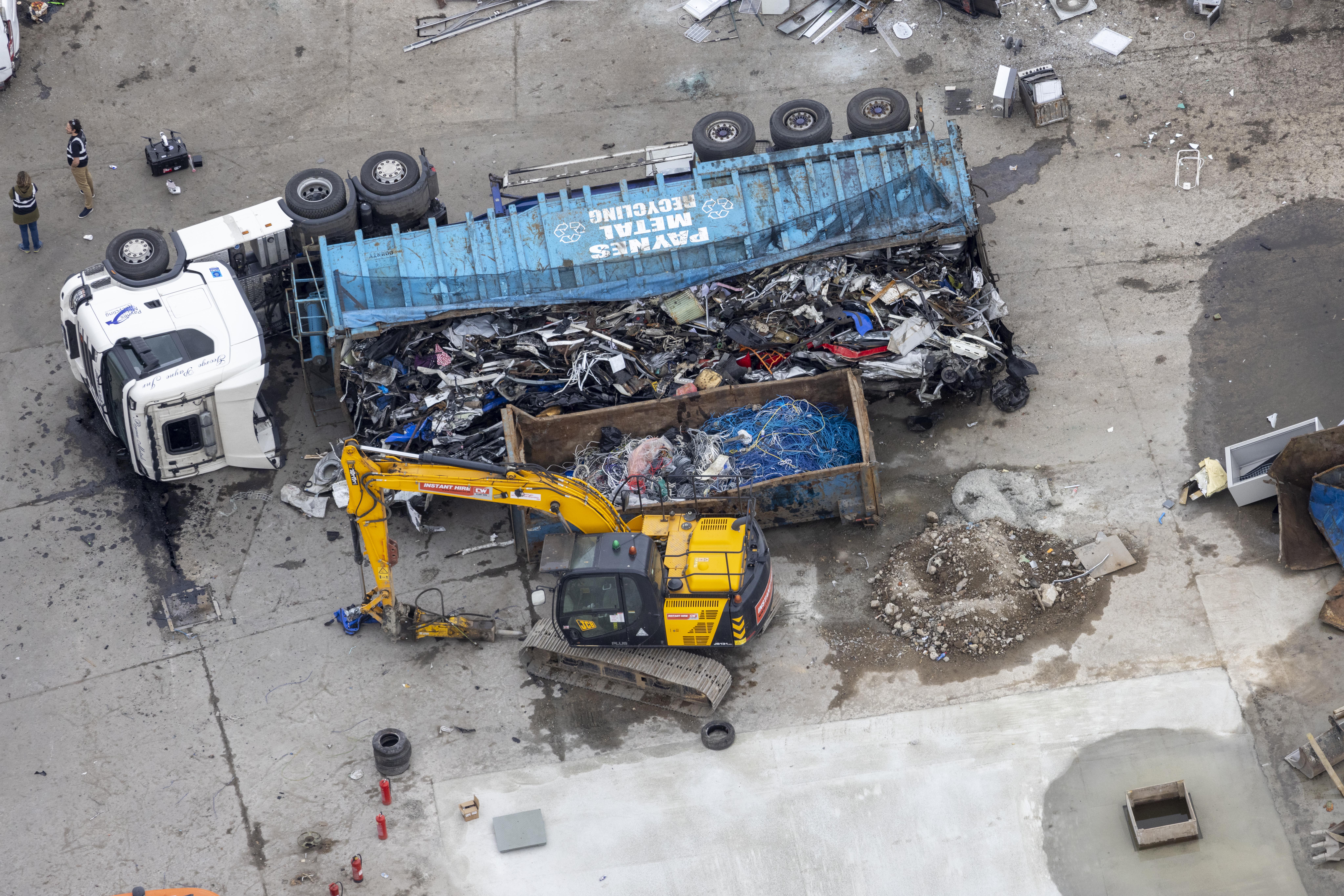 The digger driver used the yellow machine to flip over a fully loaded 44-ton lorryCredit: The Sun 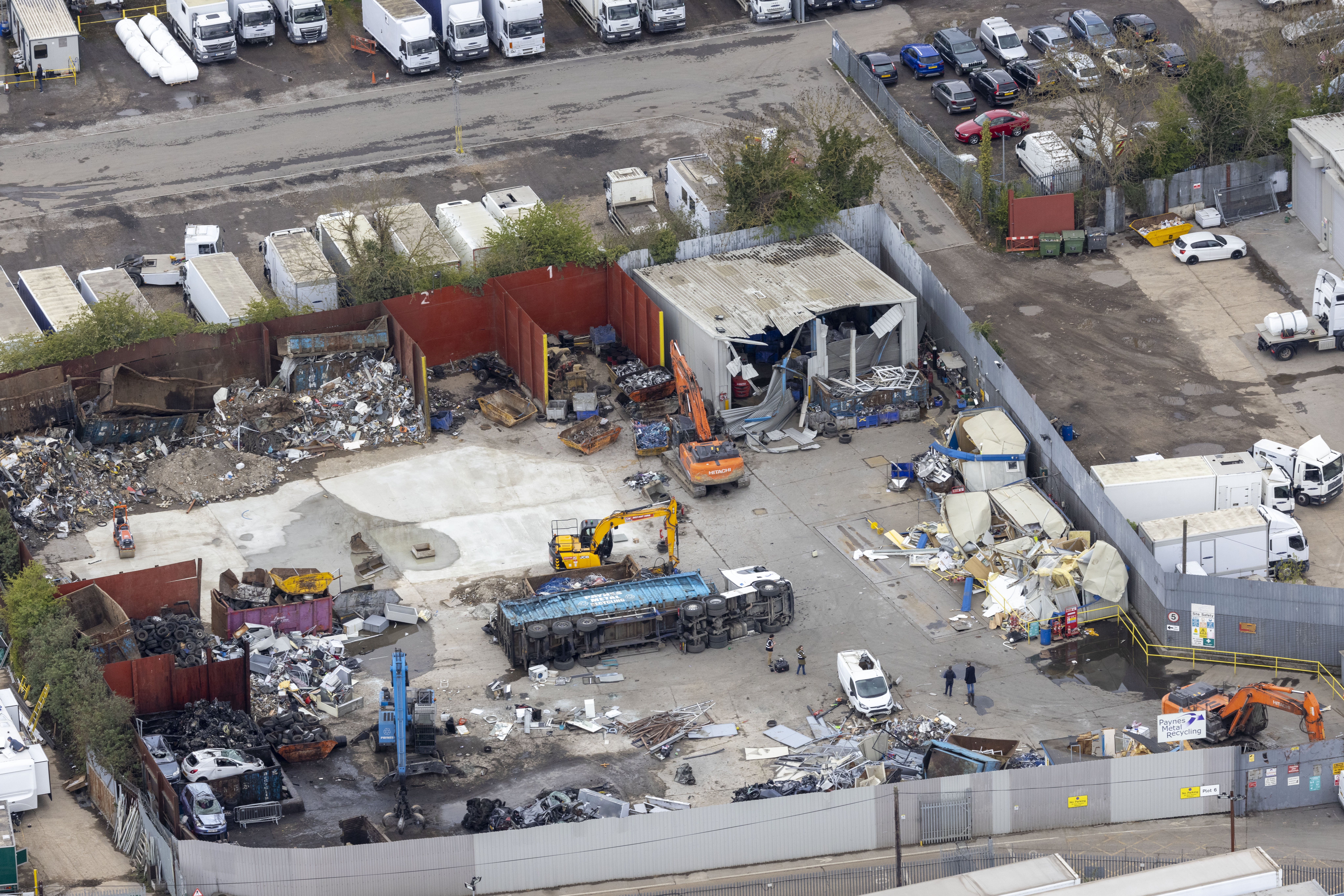 An aerial showed the full extent of carnage in the recycling yard in Iver, BucksCredit: The Sun

Workers in hi-vis jackets were on site yesterday preparing for a mammoth clean-up operation.

The driver, said to be a long-serving employee, began unleashing havoc at 6.15am on Wednesday at the plant on the Court Lane Industrial Estate.

A member of staff at the site: “He had worked there for years and then this happened. It has really shocked everyone.”

A Paynes worker said there had been a “bereavement” but declined to comment further.

“He somehow flipped over a lorry, then threw around a Transit van before opening it up like it was a tin of sardines.

“He then went through a cabin with people still inside. It is thought to be over a dispute with someone at the firm.

“The damage is absolutely horrific — it’s a big clean-up job that I wouldn’t want to be doing.”

The business was set up in 2005 by Roy Charles Payne and occupies one of the 15 units at the estate, which is four miles from Heathrow.

A Thames Valley Police spokesman said: “A man has been charged with one count each of criminal damage, using a motor vehicle on a road or public place without third party insurance, and driving a motor vehicle otherwise in accordance with a licence.

“The charges are in connection with an incident that took place in which a man used an excavator to damage vehicles and buildings at Paynes Metal Recycling.” 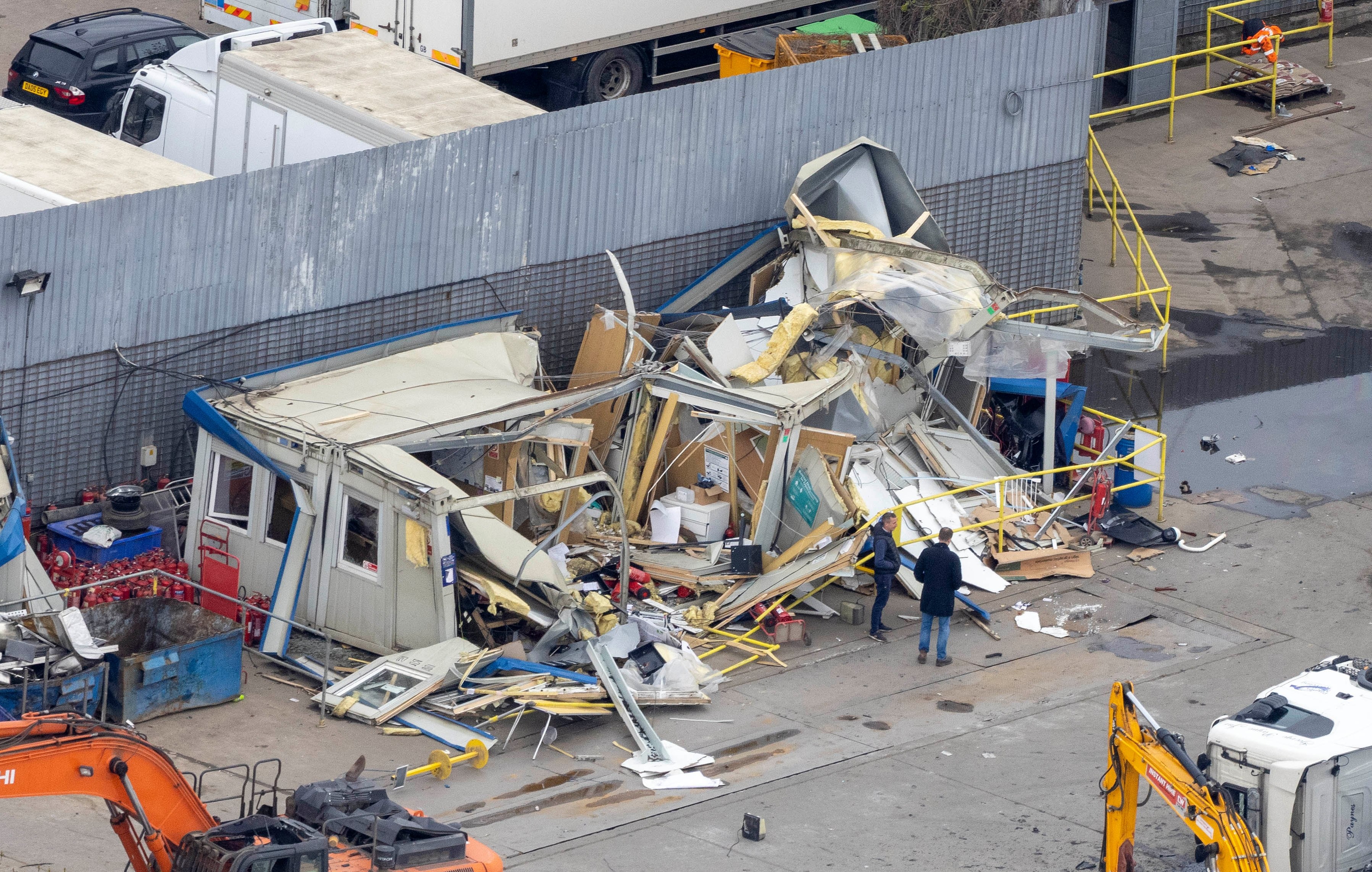 He smashed through a series of portable cabins at the metal recycling plant with the terrified staff apparently still trapped insideCredit: The Sun 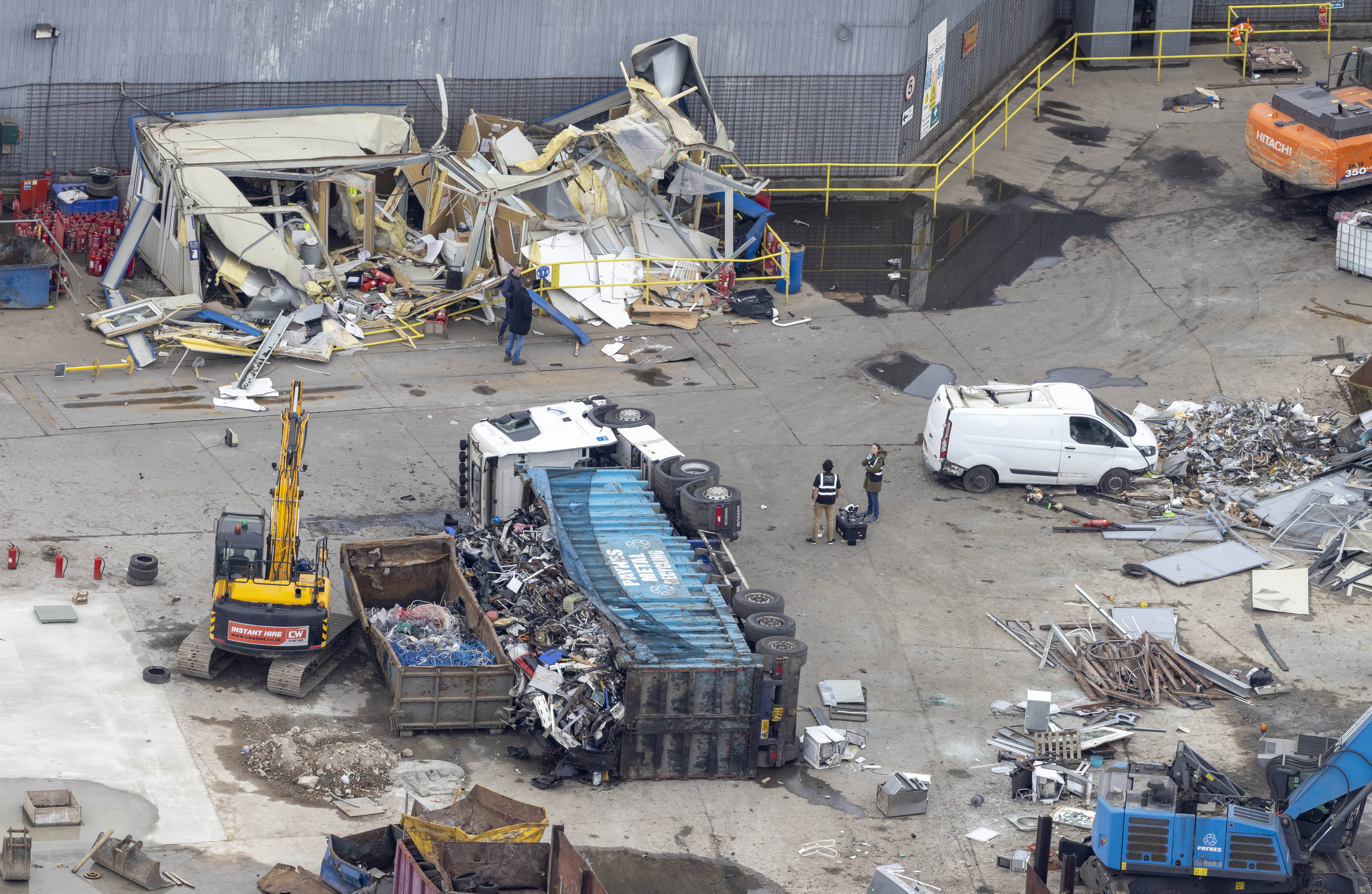 The driver, said to be a long-serving employee, began unleashing havoc at 6.15am on WednesdayCredit: The Sun

He did not enter any pleas and he was remanded in custody to appear at Reading crown court on May 31.

A woman at his house yesterday declined to comment on the incident. 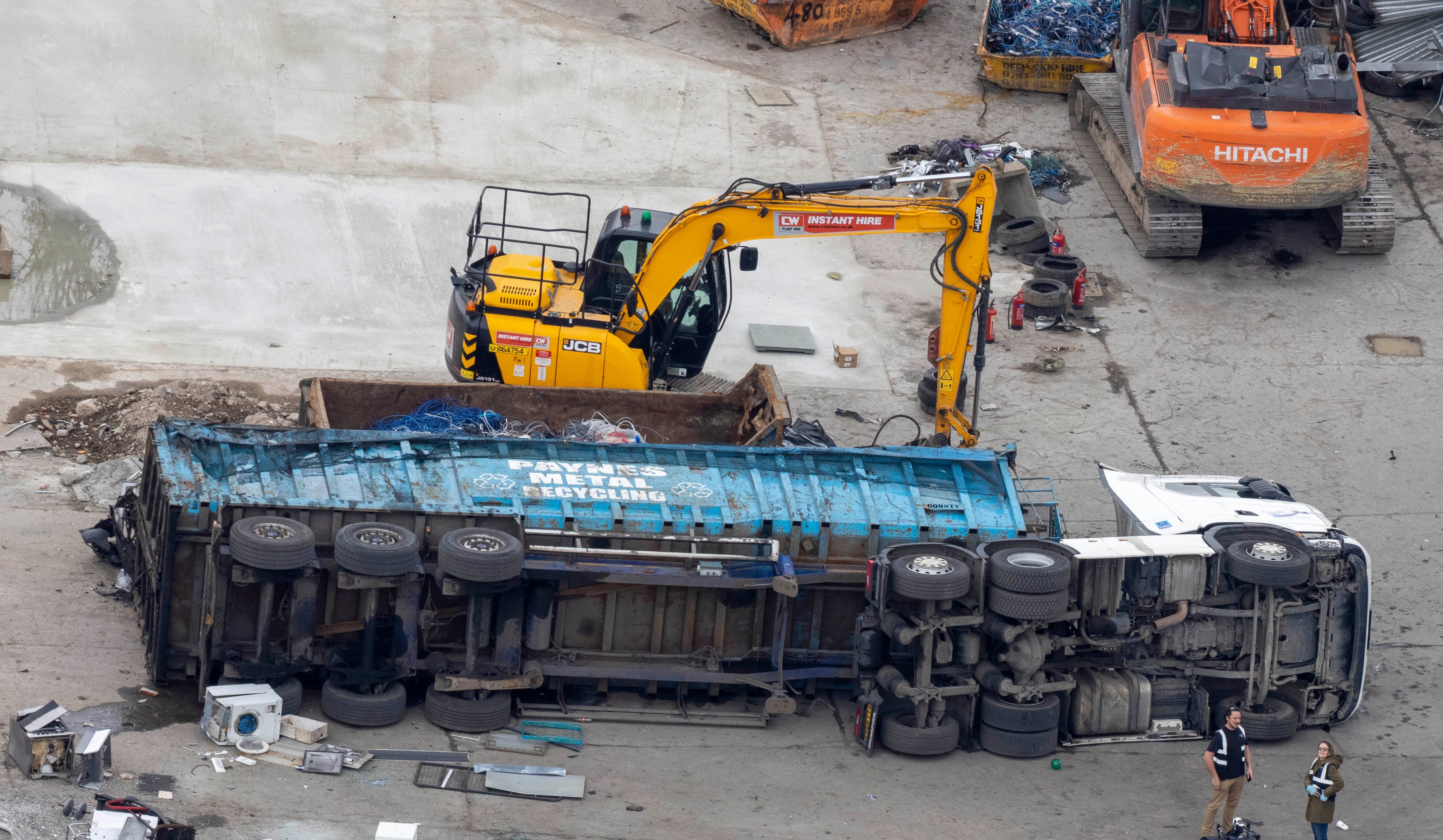 A 44-year-old, from Denham, Bucks, appeared before Reading magistrates’ court yesterdayCredit: The Sun 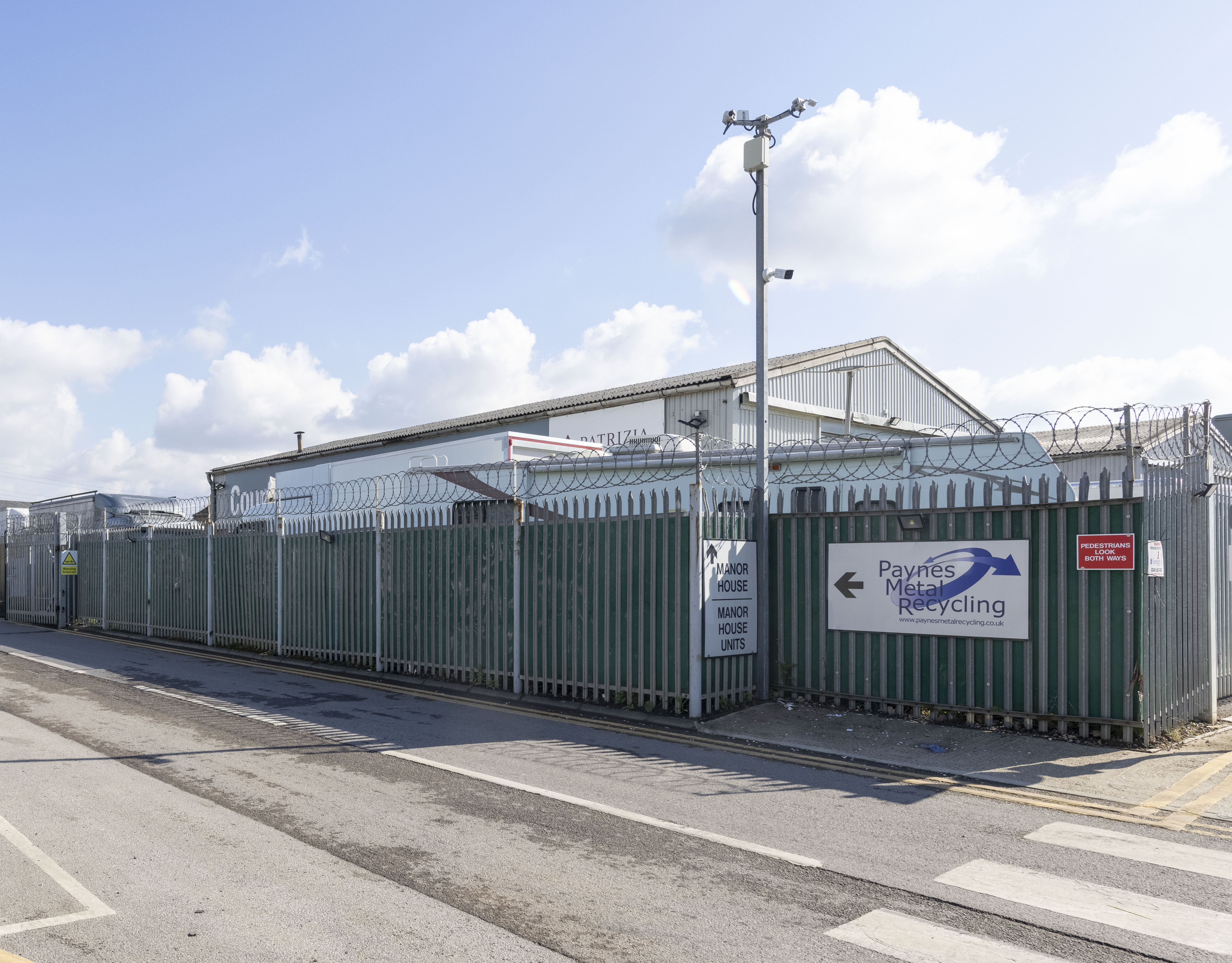 The business was set up in 2005 by Roy Charles Payne and occupies one of the 15 units at an industrial estate, which is four miles from HeathrowCredit: The Sun

Man jailed for 14-months for going on a 25-tonne digger rampage smashing up his boss’s £100,000 Range Rover and a truck