The image was posted on Instagram by the Royal Family this afternoon and shows the pair standing in a field in the grounds of the estate in the early 1970s. 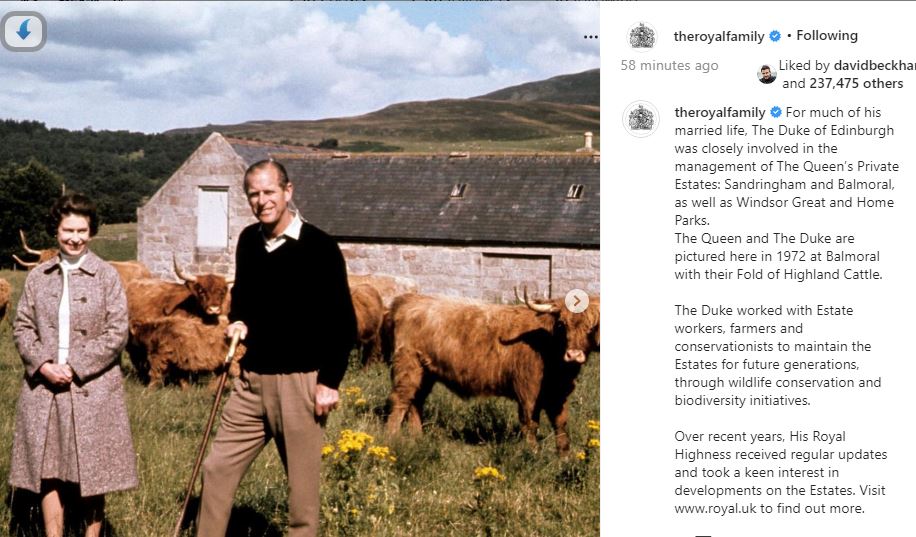 The photo of the royal couple was taken in 1972Credit: The Royal Family/Instagram

The photo was captioned: “For much of his married life, The Duke of Edinburgh was closely involved in the management of The Queen’s Private Estates: Sandringham and Balmoral, as well as Windsor Great and Home Parks.

“The Queen and The Duke are pictured here in 1972 at Balmoral with their Fold of Highland Cattle.

“The Duke worked with Estate workers, farmers and conservationists to maintain the Estates for future generations, through wildlife conservation and biodiversity initiatives.

“Over recent years, His Royal Highness received regular updates and took a keen interest in developments on the Estates.”

Prince Philip was a pivotal patron of WWF, serving as a passionate voice, advocate and champion for the organisation’s work from its creation and particularly as WWF International’s President from 1981 to 1996.

In 1970, WWF established its highest conservation award, eponymously named the Duke of Edinburgh Conservation Award, to recognise and encourage significant achievement in the global environmental field.

The Prince was also the first president of WWF-UK, from its establishment in 1961 through 1982.

Pavan Sukhdev, President of WWF International, said: “The Duke of Edinburgh has been a tireless champion for the environmental cause and a passionate ambassador for conservation issues around the world for decades.

“His Royal Highness helped chart the course of WWF from its very beginning and has truly made enormous contributions to the organisation.

“Across more than 50 years, His Royal Highness, Prince Philip’s efforts on behalf of WWF have been inestimable – visiting WWF projects in over fifty countries on five continents, promoting conservation issues at the highest government and corporate levels, and helping with essential fundraising and awareness promotion.

“On behalf of all of us at WWF, I extend my sincere sympathies to Her Majesty the Queen, to the Royal Family and to the family of His Royal Highness, Prince Philip at this very sad time.”

The Queen’s late husband toured the world to draw attention to the plight of wildlife endangered by poaching, deforestation and pollution, photographing seals in Antarctica, feeding elephants in Africa and posing with pandas in China.

“We depend on being part of the web of life, we depend on every other living thing on this planet, just as much as they depend on us,” he once reflected.

“If we as humans have got this power of life and death, not just life and death but extinction and survival, we ought to exercise it with some sort of moral sense. Why make something extinct if we don’t have to?”