FASCINATING photographs showing the Queen and Prince Philip at the launch of the QE2 transatlantic superliner have been revealed in a new book just days after the duke’s death.

The candid photographs show the monarch, aged 41 in 1967, smiling as she visited the dockyard with her husband. 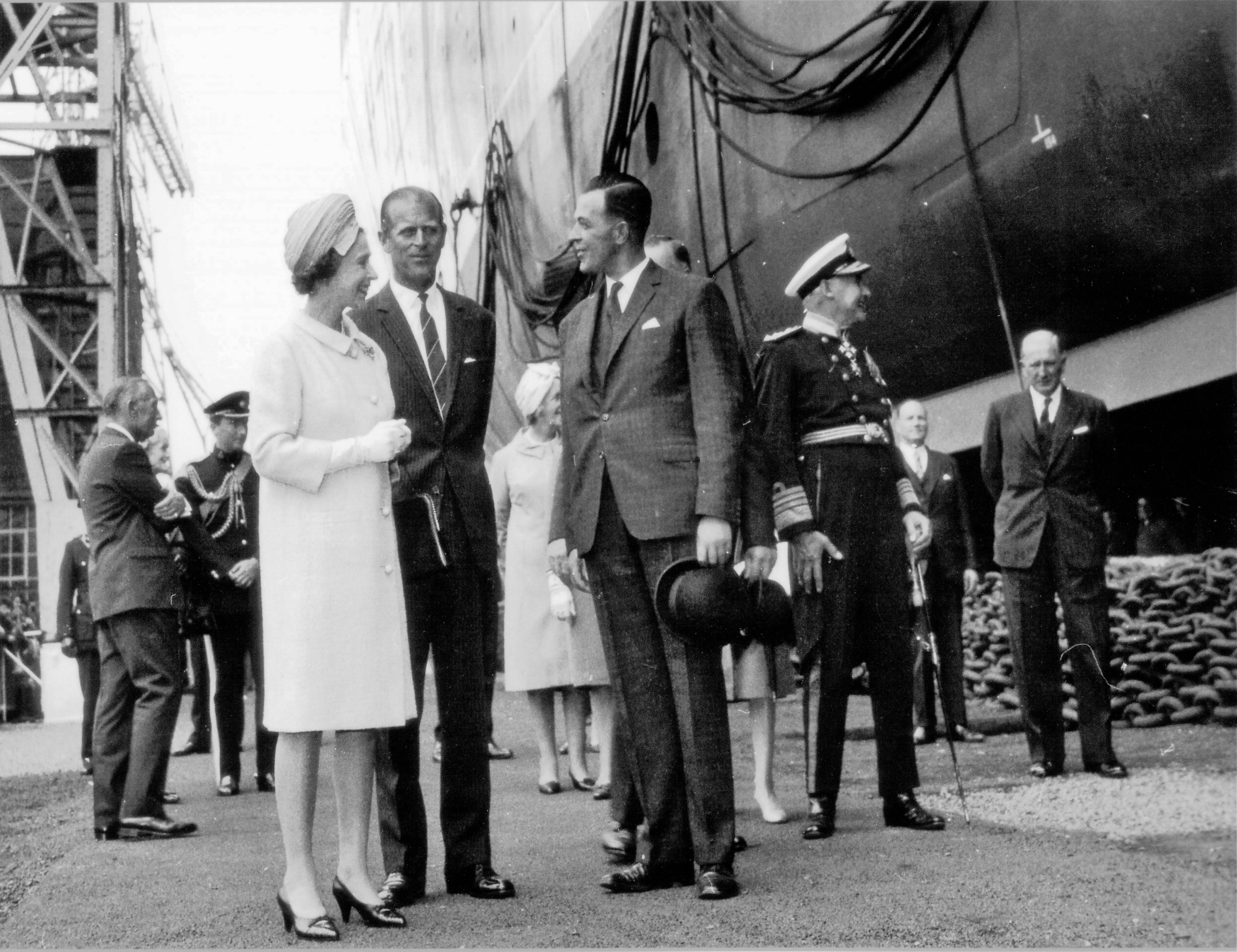 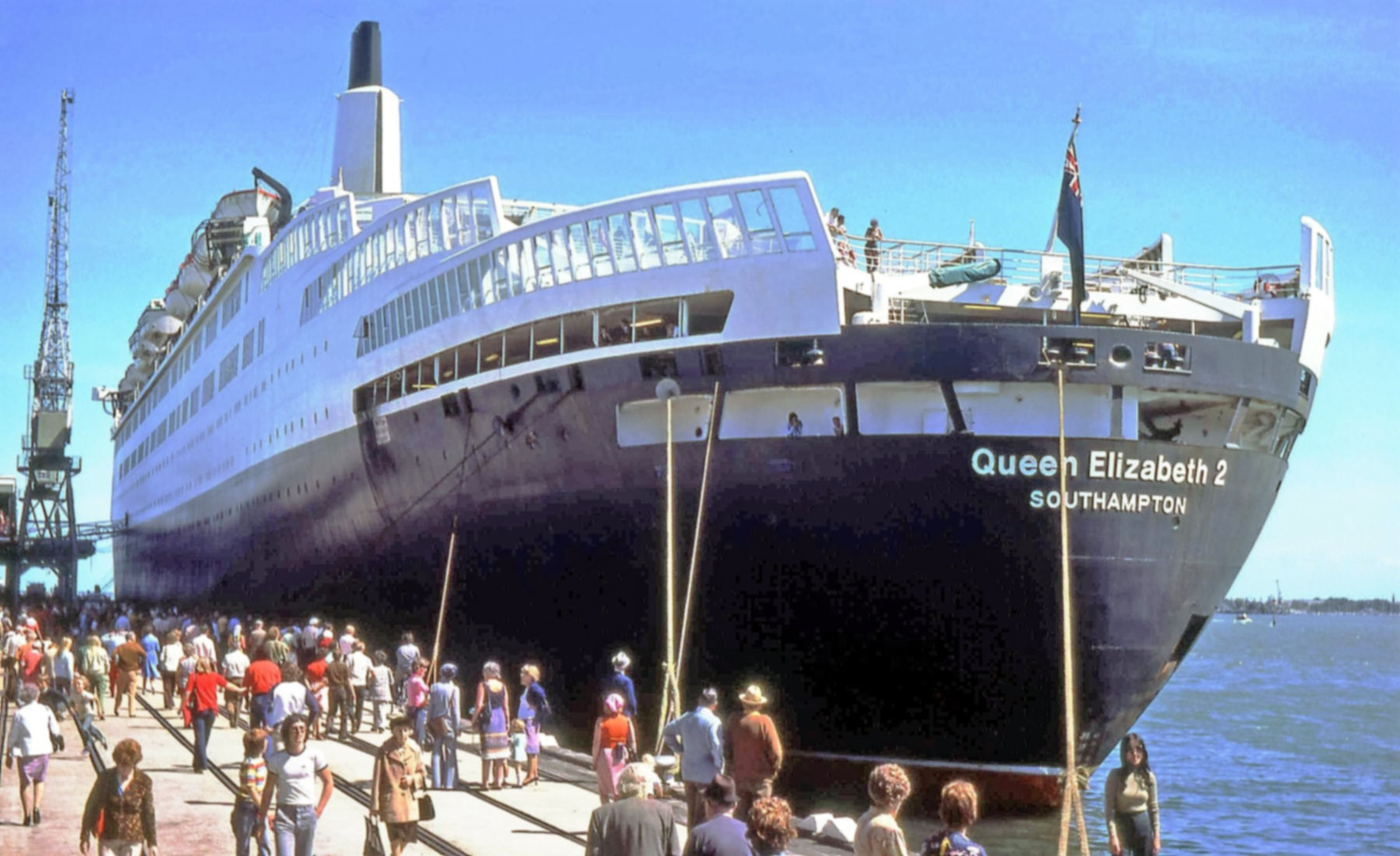 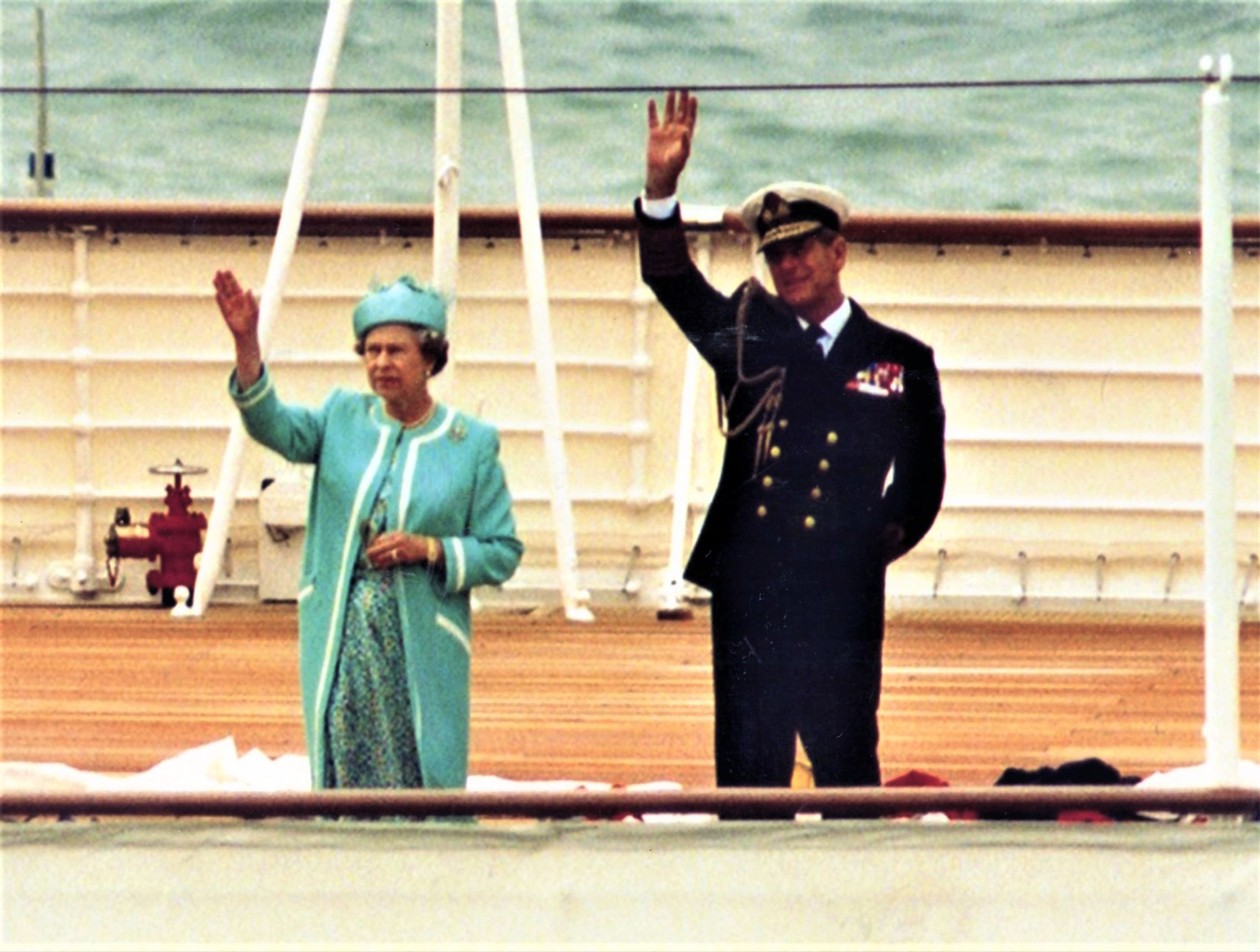 Just one of the pictures show Her Majesty walking alongside the huge 963-foot-long liner, speaking to a workman.

Another image showed the Queen and her sister Princess Margaret looking up at the grand vessel from a podium before they both waved it off as they were joined by Prince Philip.

The touching photographs were released just days after the Duke of Edinburgh died on April 9th.

The 99-year-old prince was laid to rest in Windsor over the weekend, with the Queen today thanking the public for their support after the death of her husband.

And the new photographs show the amazing experiences that couple had during their marriage of more than seven decades.

Along with the photos of the smiling queen, other eye-opening shots of the 70,327 ton passenger liner show cruise-goers enjoying a meal in the ship’s grill restaurant and the ship attracting large crowds while moored in Melbourne, Australia. 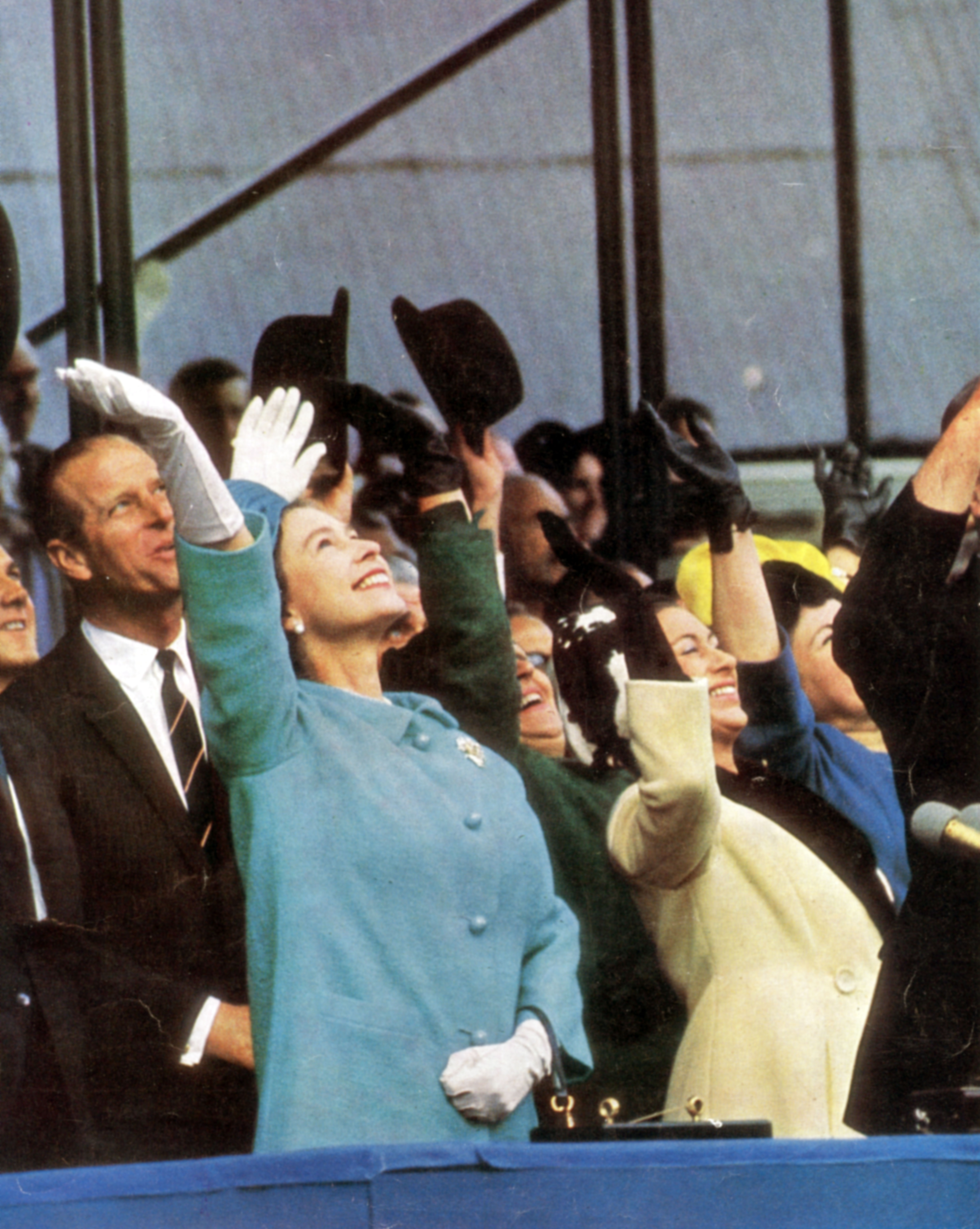 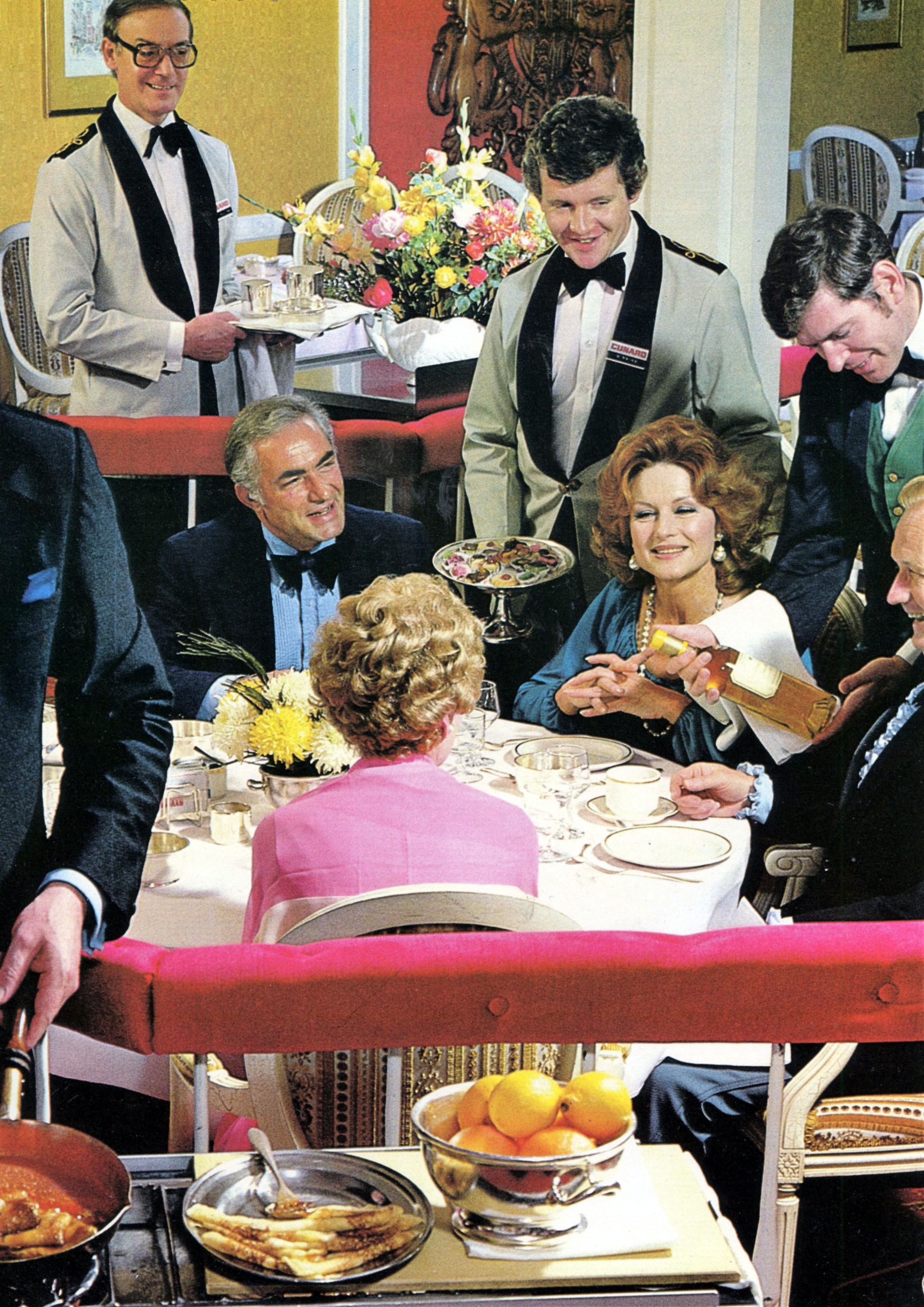 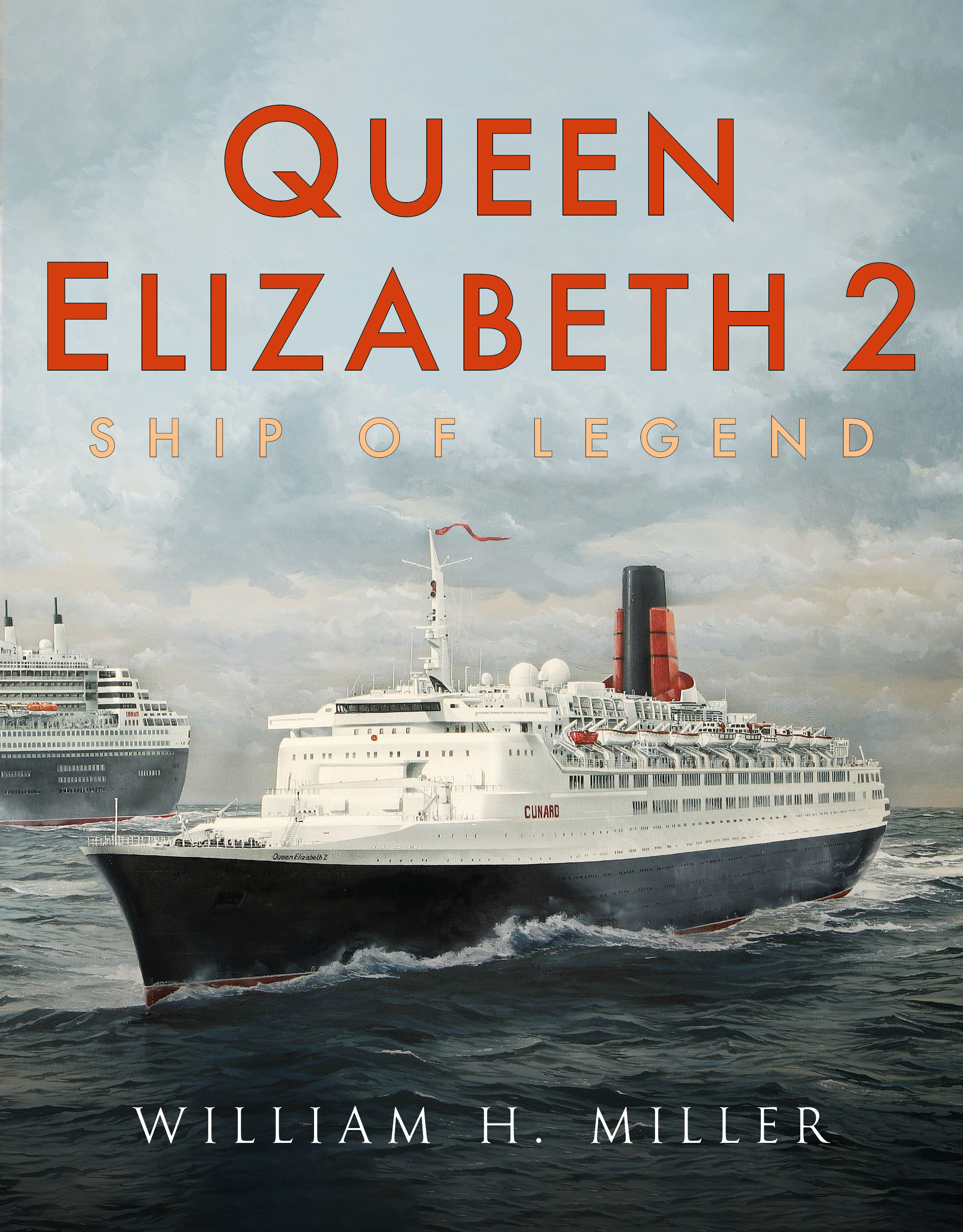 The images from William H. Miller’s new book detailing the life of the QE2 were revealed days after the death of the Duke of Edinburgh

With the rise in popularity of air travel and jet planes, the 1960s were the end of the trans-Atlantic liner era and by 1963, airlines had secured 95 per cent of all trans-Atlantic travel.

“Some one-hundred-and-fifty members of the World Ship Society were booked – we were boarding a specially-chartered vessel, normally on the run to the Statue of Liberty, to sail out beyond the Lower Bay and under the Verrazano-Narrows Bridge for a very special arrival. Now some fifty years ago, we were awaiting the maiden arrival of the Queen Elizabeth 2,” wrote William in the book’s introduction.

“As the majestic ship, already dubbed QE2, drew closer, horns and whistles and sirens began their long chorus of welcome.

“The liner moved gracefully, royally if you will, and passed under the Verrazano and then slowly northwards to the Upper Bay and along the Hudson.

“It seemed every ship, large or small, took a turn and offered a loud salute. A French Line freighter at Pier 32 and then another from Grace Line at Pier 40 seemed to pause in being ‘worked’ by dockers and signaled salutes with their whistles.

“The 963-foot-long liner might be the flagship of the illustrious Cunard Line, but in ways, she was flagship of all the seas. She was, after all, a Cunard Queen. 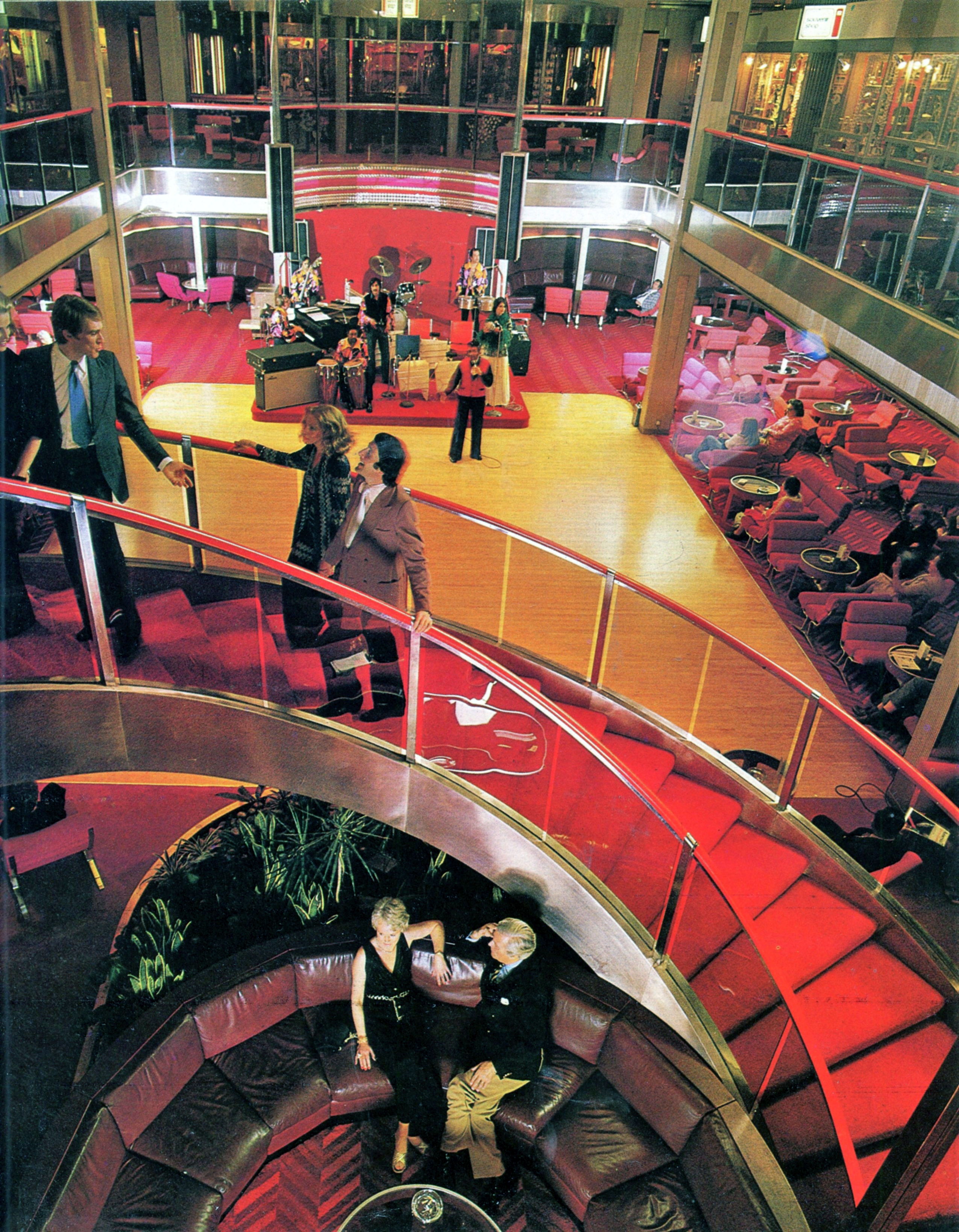 Onboard entertainment: A band plays music in the superline’s multi-storey entertainment hall, complete with a grandiose spiral staircaseCredit: Mediadrumimages/Fonthill Media/C 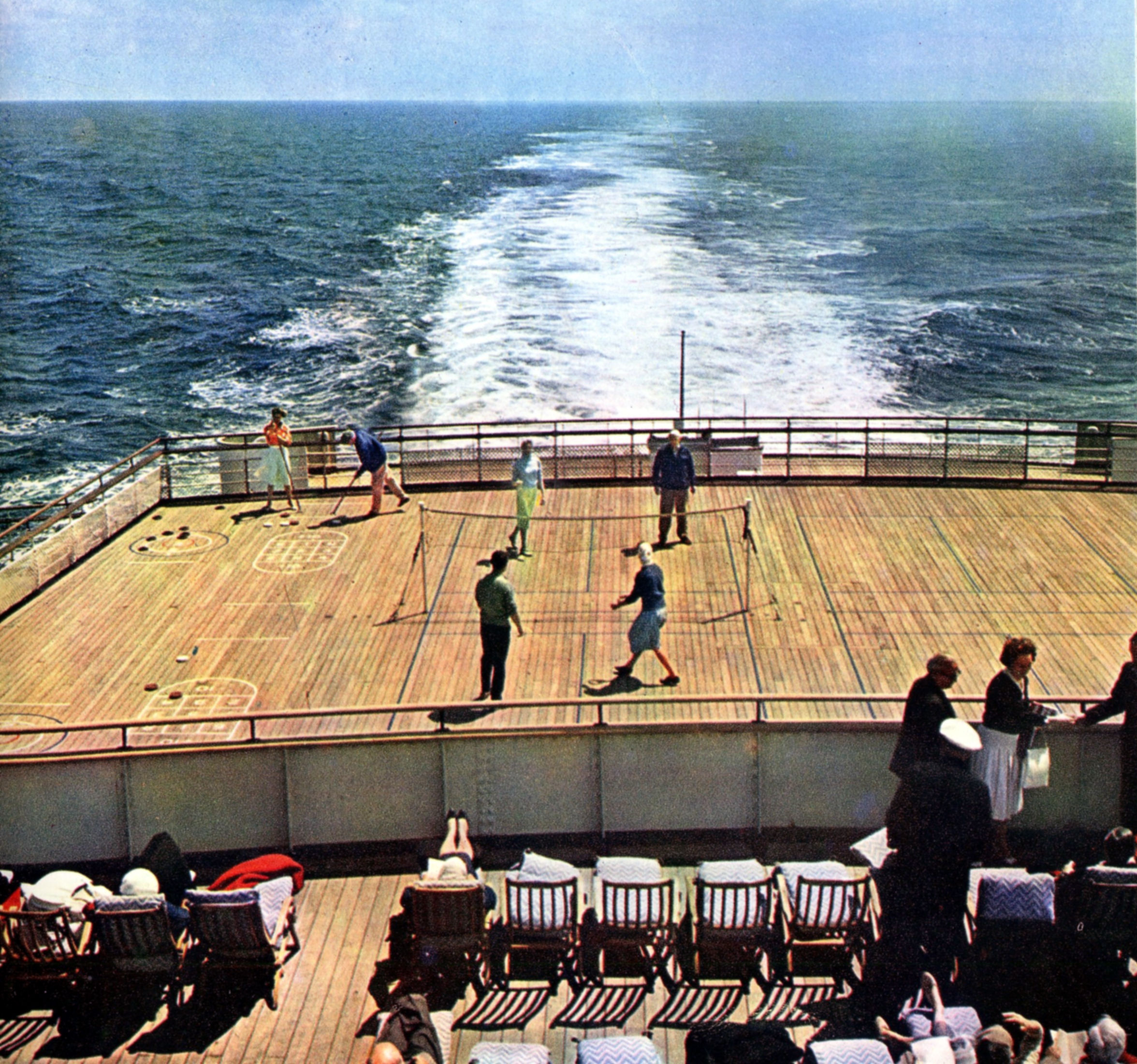 Passengers play deck shuffleboard and badminton while others lounge in their deckchairsCredit: Mediadrumimages/Fonthill Media 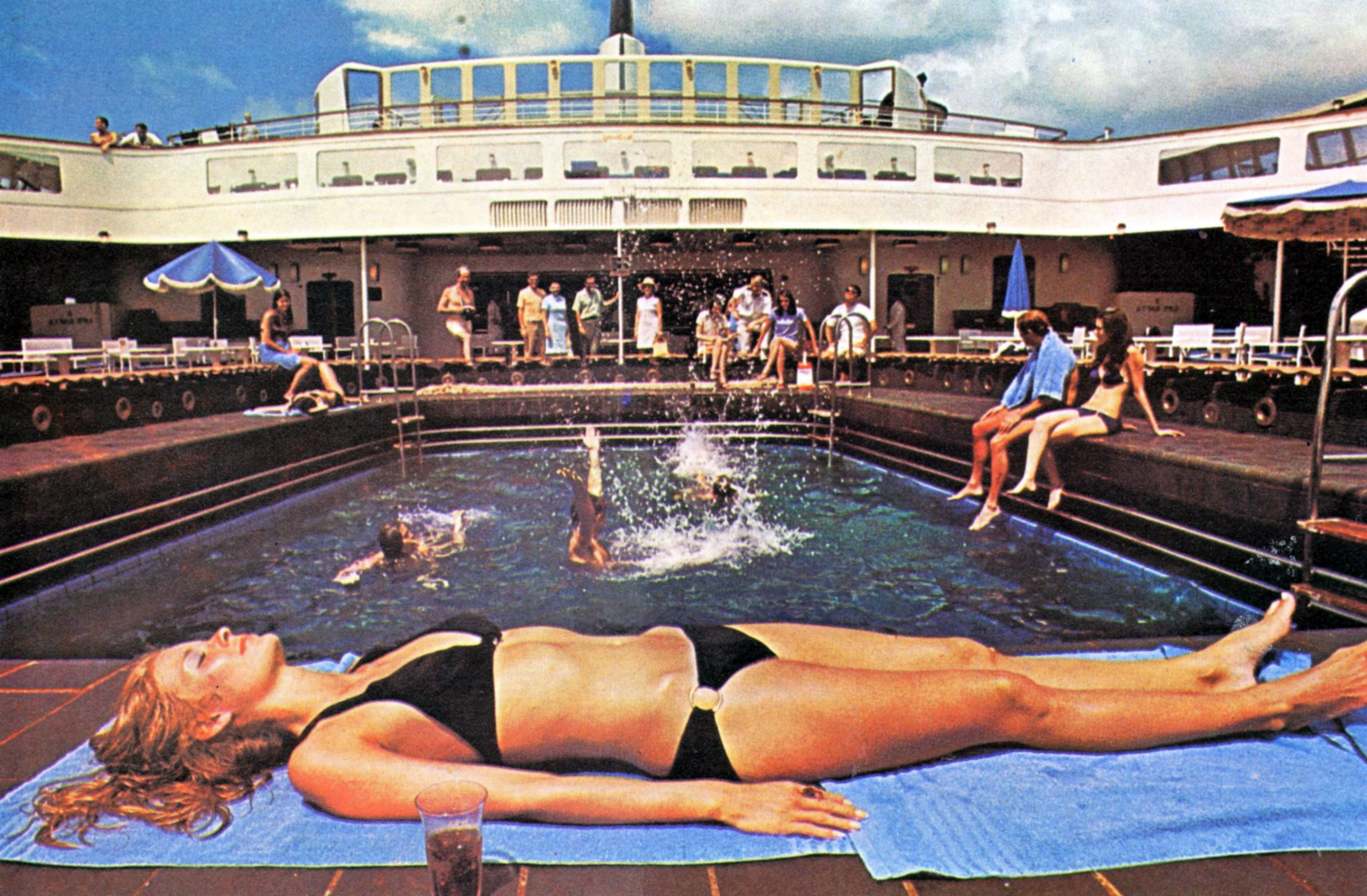 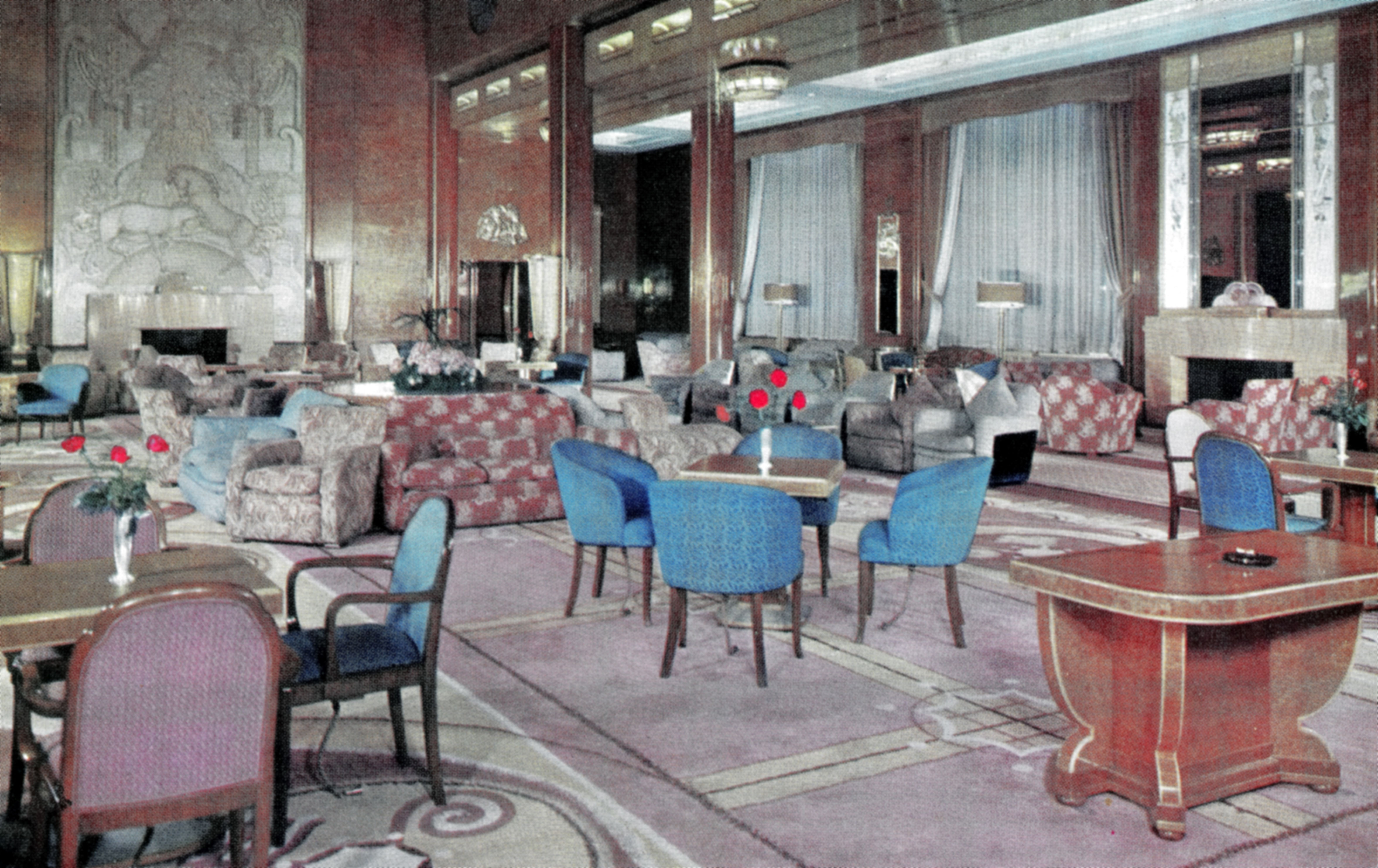 The lounge area of QE2 sitting empty. The liner now functions as a museum and hotel in DubaiCredit: Mediadrumimages/Fonthill Media/C 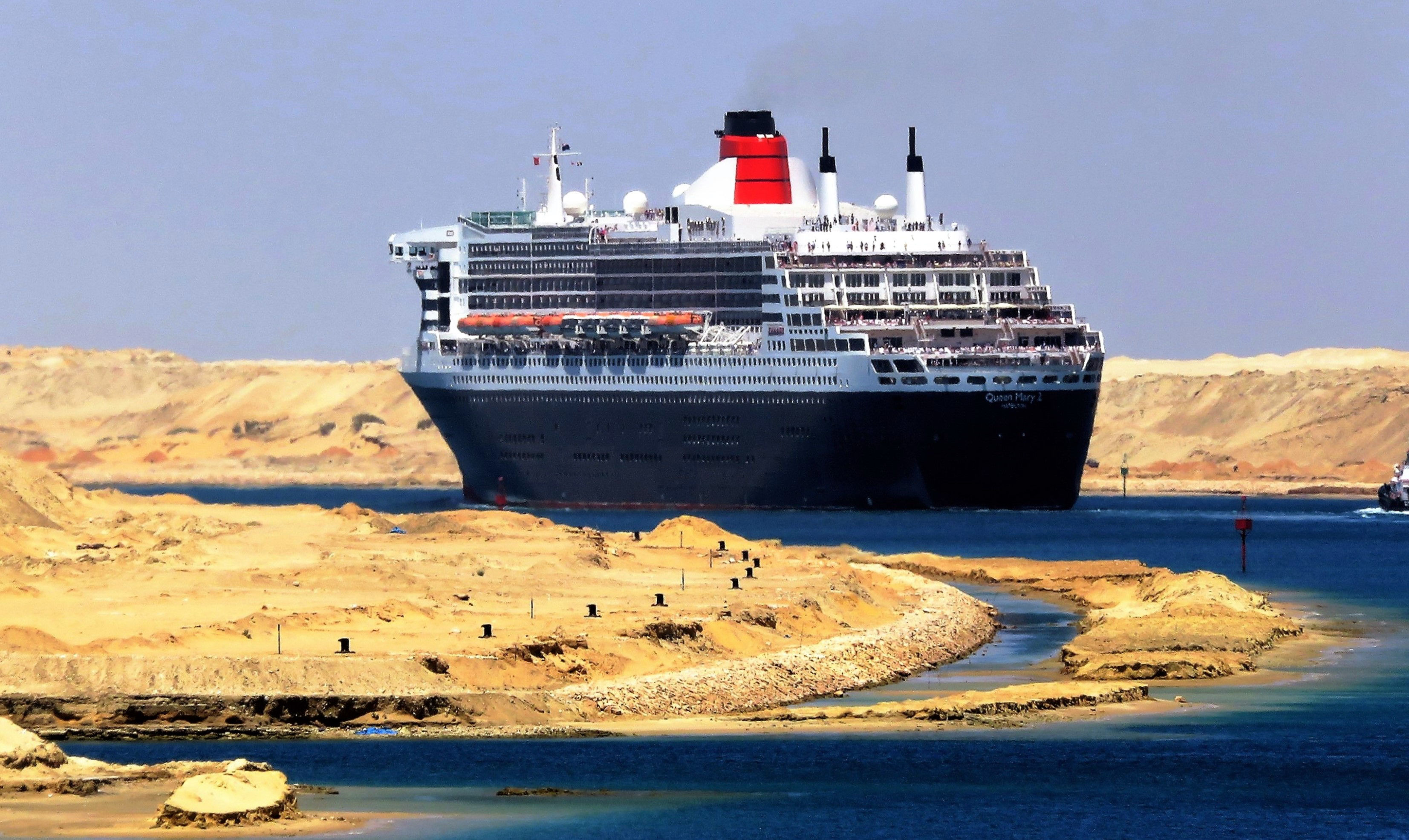 “And in rather quick time, especially after her first winter world cruise in 1975, she would become the most famous liner in the world.

“Our vessel waited in mid-Hudson as several Moran tugs nosed the QE2 into the south side of Pier 92. Yes, she looked big, powerful, and sleek. Once back at home in Hoboken that night, I looked northward to Luxury Liner Row.

“The QE2 towered above the rooftops of the piers – she looked radiant. She was lighted and especially floodlit from end to end. Yes, the new Queen had arrived and, in ways, a new Cunard.”

The fascinating pictures of Queen Elizabeth 2, also known as the QE2 have been released in a new book, Queen Elizabeth 2: Ship of Legend by William H. Miller. It is published by Fonthill Media.