Dug is made using an emulsifying process with potato proteins and rapeseed oil (Picture: Getty/Veg of Lund)

We all know you can’t get blood from a stone, but did you know you can get milk from a potato?

In an age where the word ‘milk’ can refer to dozens of products, we’re no strangers to dairy alternatives. Potato milk, however, is a new one.

Developed by Professor of food technology, engineering, and nutrition, Eva Tornberg at Lund University, Dug milk – which is sold across Sweden and the UK – is made from the humble spud.

The idea came about after the scientist was taking part in a research project about potato proteins compared to other vegetable proteins.

Tornberg tells Metro.co.uk: ‘Compared to other vegetables, potatoes are not usually seen as a good dietary source of proteins, as they only contain around 1-1.5% protein.

‘However, potato proteins do have an excellent amino acid composition full of essential amino acids, as well as a high biological value (BV), which indicates how well proteins can be absorbed in the body.’

These findings led her to the realisation that potatoes – which require less land and water to grow than other crops – might make the perfect sustainable milk alternative for those who are concerned about the environment.

For comparison, potatoes need two times less land to grow than oats and the process uses 56 times less water than almond cultivation. The BV of potato proteins (between 90 and 100) is also around the same as eggs and higher than soy proteins.

Why is potato more sustainable than other milks?

But how do you extract milk from a potato?

Tornberg and the team at Veg of Lund set about trying to work out the perfect formula – and it turns out you don’t extract the milk at all.

‘Milk is not extracted from potato,’ says Tornberg. ‘It is made by making an emulsion, which is defined as small oil droplet dispersed in a water phase.’

She continues: ‘It is not only the nutritional properties of the potato proteins that we have considered, but also the possibility to use the protein as an emulsifier, i.e. how they can form a protective membrane around the oil droplet so milk can be formed.

‘For that purpose usually vegetable proteins are not so good as animal proteins, but in this case the potato and pea protein are good.’ 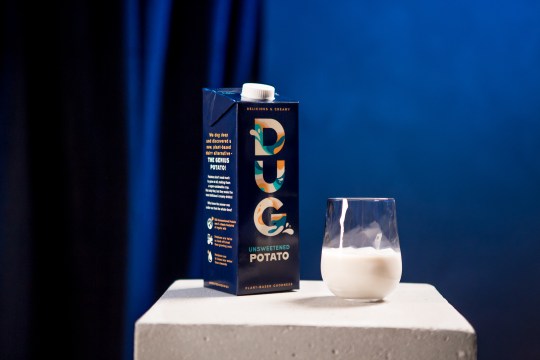 According to our taste tester, there’s no discernible potato flavour (Picture: Veg of Lund)

This emulsion, made using rapeseed oil, has the added bonus of helping the potato milk retain thickness and avoid separating, something many struggle with when using other plant milks.

According to Tornberg, Dug is also allergen-free, which ‘is not always the case for nuts and seeds’.

Yet, the burning question among the science and innovation is a fairly simple one: Does it taste like potatoes?

‘The taste is more neutral than for example for oat milk and is therefore more suitable to use in cooking,’ says Tornberg. ‘I believe if you are used to “drinking porridge” like oat milk then you can drink mashed potato!’

‘If only we’d known sooner that we could make milk out of such an abundant and easy-going crop, we wouldn’t have spent all that time and energy milking the high-maintenance almond. And having tried it, and feeling uneasy about the environmental impact of other milks, I’ll be converting.

‘If you are a fan of alternative milks, there is no reason you won’t be ready to embrace potato milk. Its taste profile sits neatly alongside oat milk – there’s no real discernible “potatoey” flavour, which I was expecting, and it’s got a creamy, mild taste.

‘The texture is creamy too – I find soya, rice and almond milk a little “thin” tasting, coconut often too sweet. Pea makes for an interesting coffee but the flavour is a little strong for other uses. This potato milk is closer in flavour and mouthfeel to oat than the former milks and, with coffee, doesn’t dominate.

‘I never drink alternative milks in tea if I don’t have to – I find they separate and leave it an unappetising watery brown colour. Potato milk tasted fine in tea, and there was only the slightest separation, with a couple of tiny blobs that didn’t blend, so if you don’t drink dairy, it works.

‘There’s a barista version – Dug’s take on the very popular Oatly Barista. It’s billed as extra creamy and foamable – and they’re not wrong. I used a Nespresso milk frother and was rewarded with a deep , robust foam layer that made a good base for hot chocolate or coffee.

‘For balance, I gave some to our resident anti-milk drinker. Put off by powdered milk as a child and a four-year milkround as a student, he does not partake of any milks, at all, and says oat tastes of “cardboard”. His take: “better than oat milk, as far as I’m concerned.”

We had our Editor give it a go (check out the review above) and she echoed these sentiments, saying she’s a convert.

Of the three varieties of Dug (original, barista, and unsweetened) Deborah tried, none had a ‘potatoey’ taste. Plus, there was less separation compared to other plant drinks, and the barista version frothed up well.

Essentially, while potatoes may seem like the last thing you’d want in your morning cuppa, the fact Dug stacks up so well against other milks in taste tests shows it’s not such a madcap idea.

And with more and more people looking to lessen their environmental impact, we can’t ignore the potato’s climate-friendly credentials either.

How this couple, both 25, saved their way to a dreamy two-bed house