On February 19, 2021, Kim filed for divorce from the esteemed rapper.

After publicly separating, Kanye and Kim both seemingly moved on to new relationships.

Their relationship has since been confirmed, with Pete referring to the reality star as his “girlfriend” during an interview with People in February of 2022.

Kanye has also been publicly linked to actress Julia Fox, the two often sharing images of their intimate moments and date nights.

Despite his romance with Fox, Kanye has continued to lament over his impending divorce.

The 44-year-old musician has begun taking to his Instagram account to share opinions regarding Kim’s dating life and decision making when it comes to their children together.

On Saturday, January 15, 2022, Kanye accused Kim of hiding the location of a birthday party for their daughter, Chicago, while he was Live on Instagram.

He said he attempted and failed to reach members of the Kardashian family in regards to the location of the party.

Despite the video, Kanye was pictured at the party – which also celebrated Kylie Jenner’s first-born Stormi Webster turning four.

Hours prior to the birthday party fiasco, Kanye West exclusively released the song Eazy on Spotify.

In the song, Kanye states: “God saved me from the crash, just so I can beat Pete Davidson’s a**.”

Kanye once again seemingly references Pete in his verse, rapping: “This afternoon, a hundred goons pullin’ up to SNL, when I pull up, it’s dead on arrival.”

On Saturday, February 12, 2022, Kanye shared a handwritten note to his Instagram account informing fans: “Just so everyone knows Cudi will not be on Donda because he’s friends with you know who.”

“You know who” seems to be another reference to Pete.

He added: “We all speak in Billie language now.”

Kanye also shared an image of himself with Kid Cudi and Pete at dinner, crossing Pete’s face out with a giant red ‘X’.

On February 14, 2022 Ye took to Instagram to share an image of a man having another in a chokehold.

“UPON MY WIFE’S REQUEST PLEASE NOBODY DO ANYTHING PHYSICAL TO SKETE IM GOING TO HANDLE THE SITUATION MYSELF,” the rapper wrote.

The post also included what appears to be a screenshot of text messages between Kim and Kanye.

Allegedly in the screenshot a message from a contact under the name of “Kim Other Phone” tells Ye that he is creating a “dangerous and scary” environment.

The text also states that “someone will hurt Pete and this will all be your fault.”

Just days before – on Thursday, February 10 – Kanye posted a screenshot of an article alleging that Billie Eilish, a 20-year-old popstar, dissed Travis Scott.

A fan at one of Billie’s concerts reportedly needed an asthma inhaler, and the singer stopped her performance to make sure they were okay.

After doing so, Billie went on to say she waits “for people to be okay until I keep going.”

Following the concert, Kanye took to his Instagram to state he will not participate in the Coachella festival alongside Billie unless she publicly apologizes to Travis.

Although Billie made no mention of Travis during her set, Kanye seemed to allege she was alluding to the Astroworld tragedy of 2021.

Kanye wrote: “Come on Billie we love you please apologize to Trav and to the families of the people who lost their lives.” 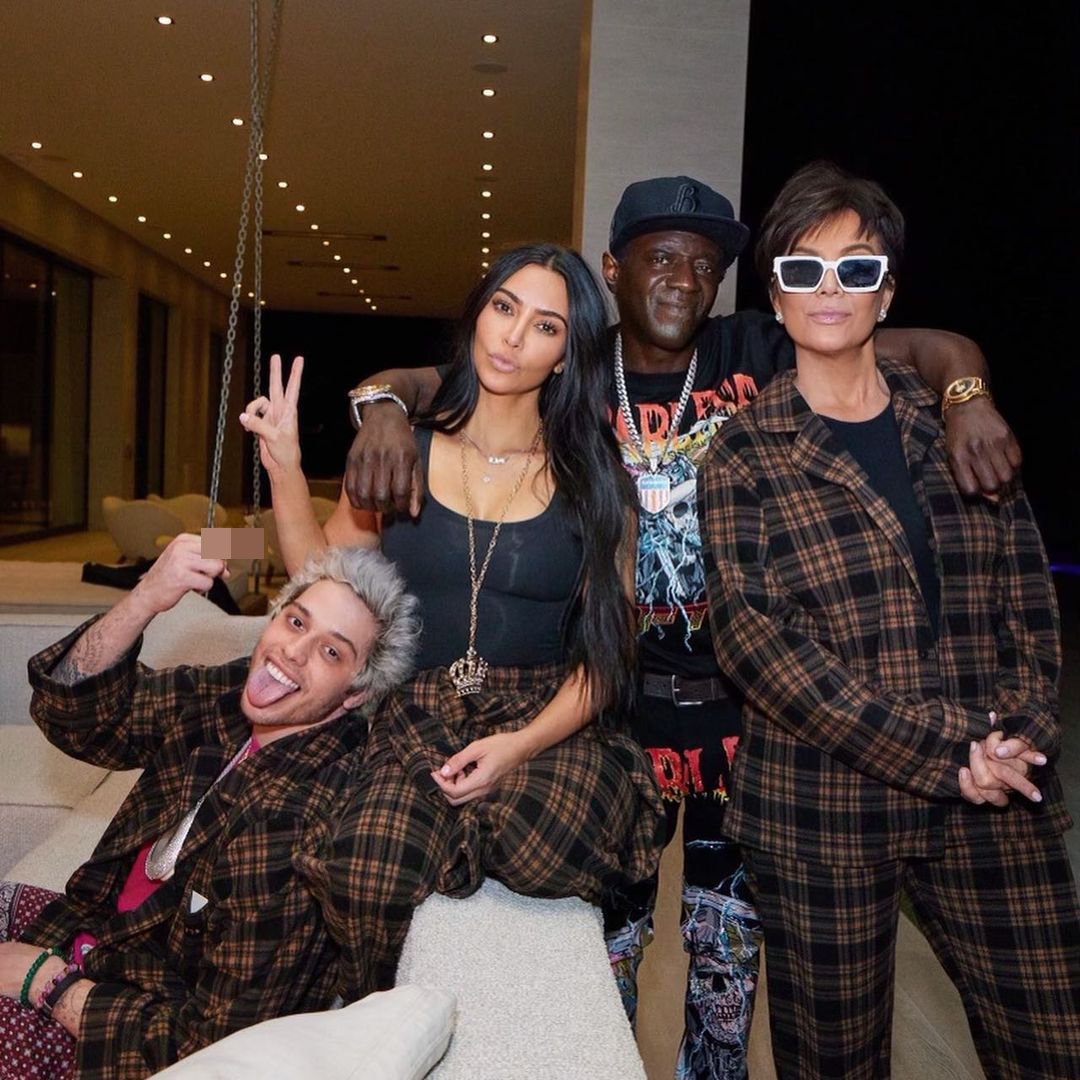 Kim Kardashian and Pete Davidson have been linked since November of 2021Credit: Instagram/Flavor Flav

Kid Cudi responded to Kanye, writing that he did not want to “be on your album, you f**king dinosaur.”

Cudi added: “Everyone knows I’ve been the best thing about your albums since I met you.”

In one image, the rapper superimposed his face onto a Marvel superhero movie poster declaring: “Kanye West – Civil War.”

Kanye also photoshopped the faces of those on his “side” of the war, including: Julia Fox, Drake, Travis Scott and Future.

On the “enemy” side of the poster, Kanye included Pete, Kim, Cudi, Billie, and Taylor Swift – someone he has beefed with publicly since 2009.

After the meme was posted about Pete, Kanye followed it up with a few more.

Continuing on with his rant, Kanye posted another Marvel meme – this time of a Venom 2 movie poster.

Kanye photoshopped himself as the titular character, with Pete as the character he’s facing off against.

He also shared a headless photo of Pete and Kim, writing: “LOOK AT THIS D**KHEAD.”

Another image included a screenshot of Pete and Machine Gun Kelly‘s Calvin Klein advertisement, alongside a photo of a text message allegedly from Pete himself telling Kanye he will not involve himself with Kim and his children.

Kanye also posted an article claiming Pete tried to get between Ariana Grande and the late Mac Miller.

The rapper then shared a screenshot of his name trending on Twitter, tagging Kim and adding: “ALWAYS REMEMBER WEST WAS YOUR BIGGEST W.”

Is It The Best Landing Page Builder?”