A MOM has told how her crazed ex scalped her and beat her unconscious – then handed her a bag of her bloody hair.

Marilyn Stanley, 31, is permanently scarred after the savage ordeal at the hands of Zachary Gross and his pit bull terrier Capone. 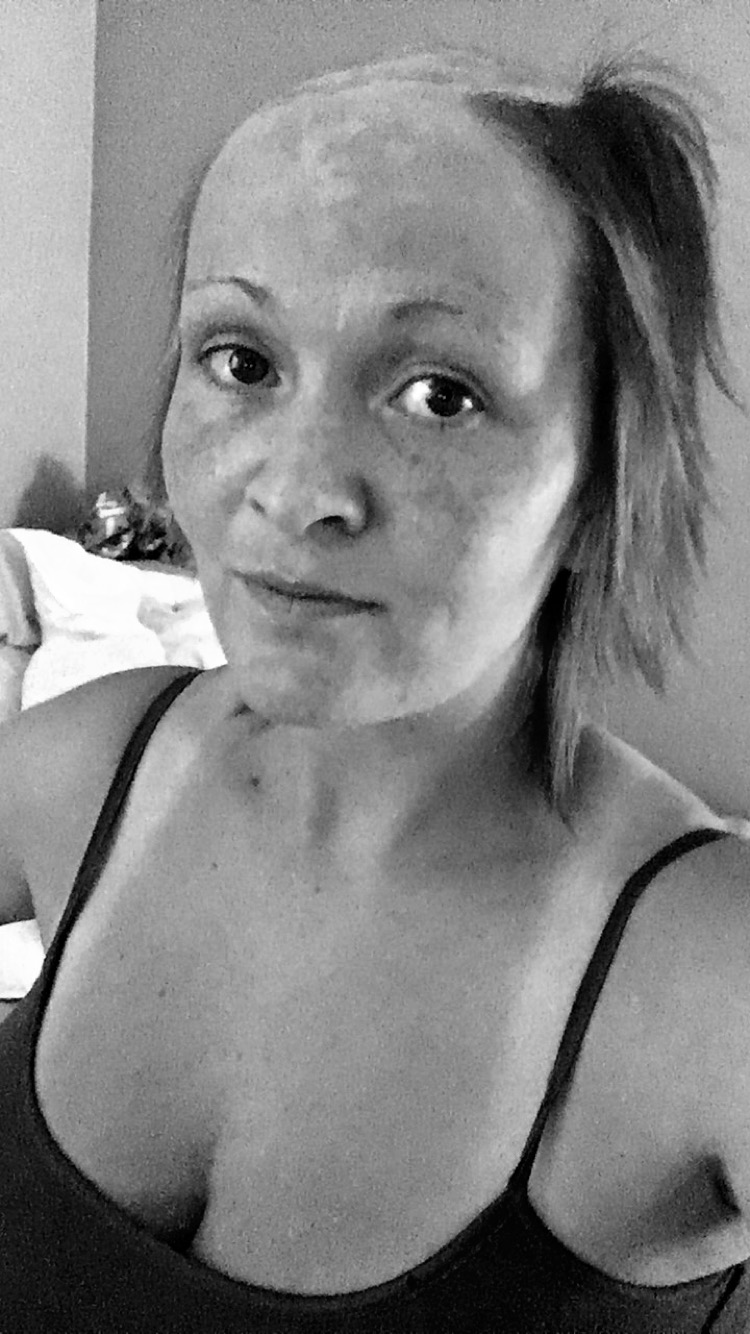 Marilyn Stanley is permanently scarred after a savage attack by her exCredit: Supplied 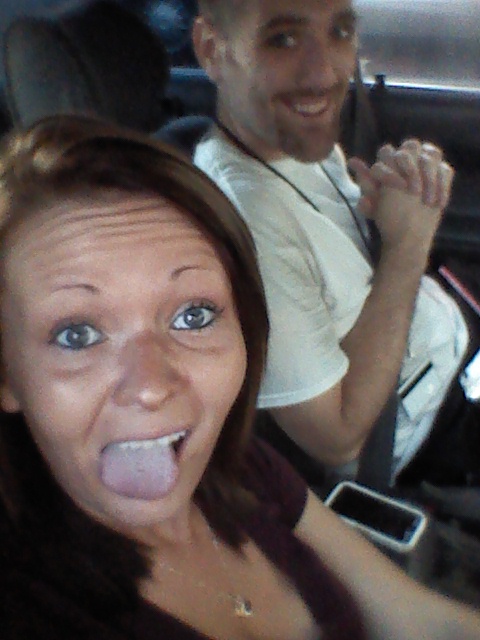 Jealous and controlling Zachary Gross flew into a rage over an innocent Facebook postCredit: Supplied

But the controlling bully began beating her and stalked her at work when she dumped him.

She agreed to meet him one last time, and he flew into a jealous rage sparked by an innocent post on Facebook.

Here Marilyn, now with a new partner, tells her story for The Sun Online:

Brushing my long blonde hair, I turned to my little boy Carter.

“Does mummy look pretty?” I asked?

I looked after my hair and was proud of it.

A single mum, I was getting ready for a rare night out with friends.

A few hours later, I was at a bar knocking back shots, having a great time with friends.

Then I spotted Zachary Gross.

He’d been at high school with my older sister. We’d never met, but we were Facebook friends.

“I’m good,” he smiled back goofily.

Zachary was tall, slim, with a short beard and nice eyes.

We chatted all night. He was funny and easygoing. We started seeing each other. 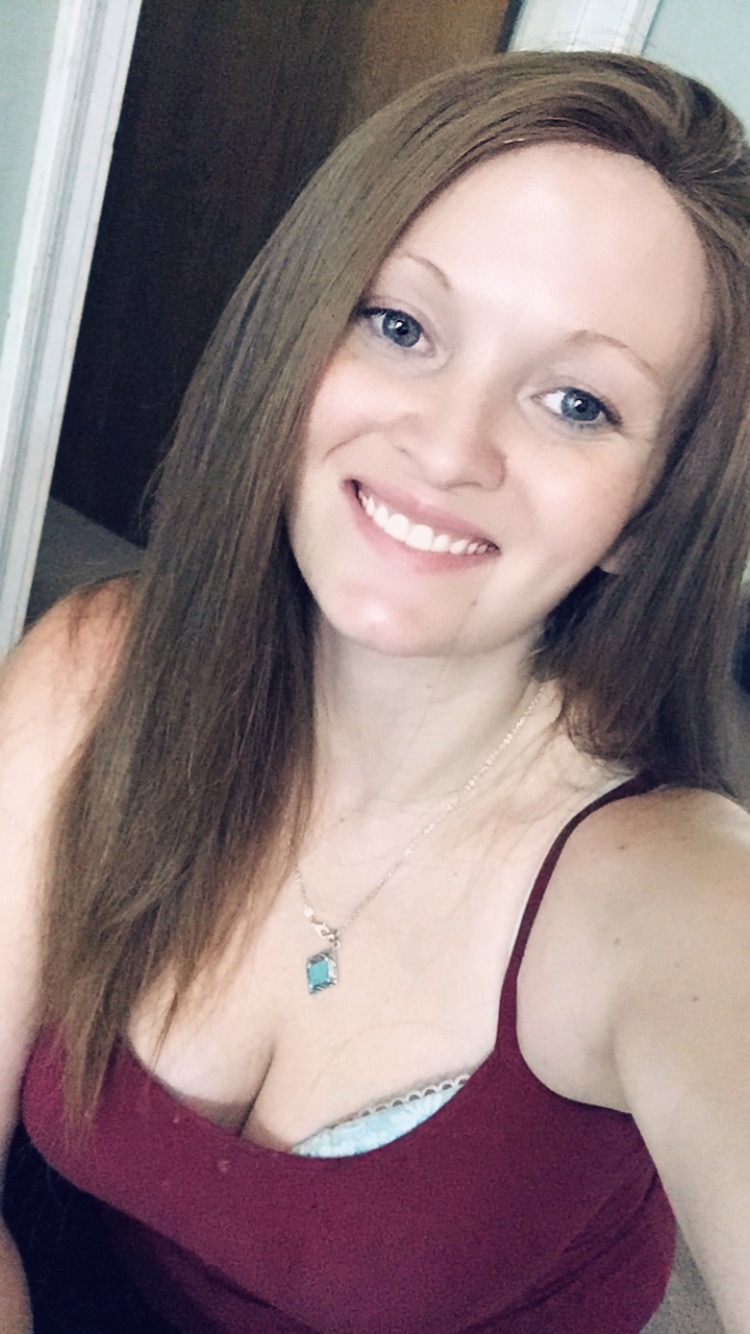 Marilyn now wears a wig after most of her scalp was sliced offCredit: Supplied

He was a sweetie, curling up on the sofa with me for a cuddle.

Zachary could be moody though.

He’d grown up in boys’ homes. I put his moods down to his tough upbringing.

“There’s something about him I don’t like,” my mum Linda warned.

I shrugged it off.

Sure, Zachary could be a little possessive and jealous, always wanting to know where I was, who I was talking to.

“It’s because I love you so much though,” he said.

Then, one day, during an argument over nothing on his front porch he dragged me down the steps and threw me on the ground.

“I’m sorry. I just lost it. I promise it’ll never happen again,” he apologised. But it did.

As our relationship went on Zachary became more controlling and abusive.

I should have left, but he threatened me.

“I’ll kill you if you leave me,” he snarled. Things got worse. 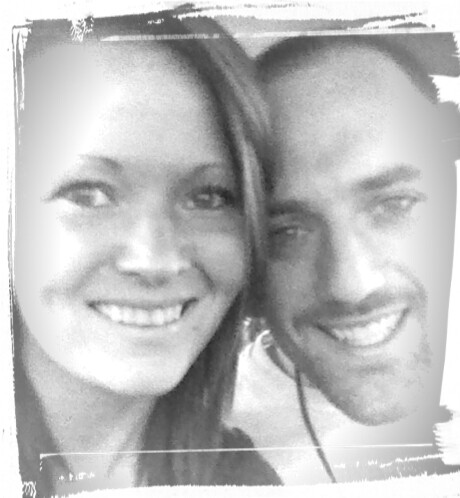 Marilyn said Zachary threatened to kill her if she left himCredit: Supplied

He broke my nose and blacked my eyes in another attack and choked me unconscious.

How did I get entangled with a psycho, I fretted.

I tried putting distance between us, ignoring him, not responding to calls.

He texted constantly, apologising, telling me how much he loved me.

When Zachary landed a job at the same book warehouse where I worked I knew he was obsessed.

“I just want to talk,” he kept saying.

I figured if I met him one last time, maybe I could calm things over, gently let him down.

So, I agreed to let him pick me up and go to his place to chat.

Still scared, I put a folding pink knife in my pocket for protection, just in case. 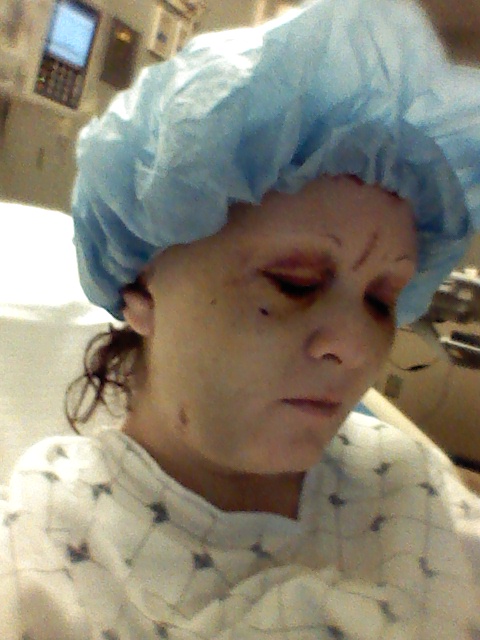 Marilyn in hospital after the savage attackCredit: Supplied

We got McDonald’s and then drove to Zachary’s.

I was standing at the kitchen island eating fries when out of nowhere he punched me repeatedly in the face.

“What was that for!” I sobbed.

I shook my head in disbelief. “He’s a friend of Brittany’s. We just bumped into him in the park,” I said.

Brittany was my best friend. We’d taken Carter to the park together and the guy, a friend of hers, had turned up.

Zachary wouldn’t believe anything I said. I bolted for the door to escape a beating.

He dragged me back in to his bedroom and threw me on the floor.

Then he straddled me, pinning me down, and punched me in the face and head. 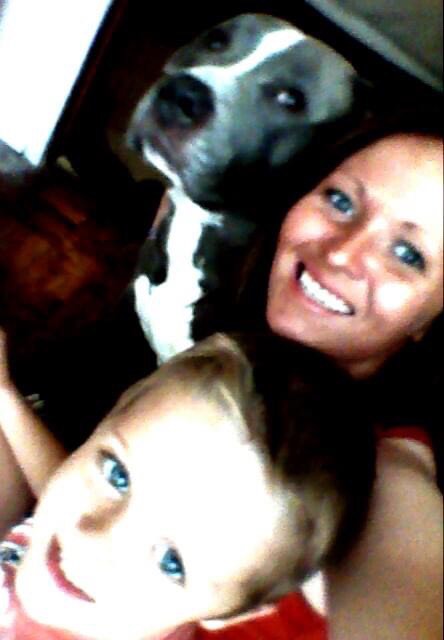 Somehow, I grabbed my knife. That made him even angrier.

And then Capone flew at me. His massive teeth clamped on my right ear.

Growling and tugging he ripped half of it off.

I don’t know if it was the shock, the pain or the punches to the head, but I blacked out.

I came to sitting up, Zachary kneeling in front of me, smirking.

“Look at you, you’re bald. Now nobody’s going to want you. Go look at yourself in the mirror,” he said.

I staggered into the bathroom and vaguely looked in the direction of the mirror, but not really at it.

My hair was wet and bloody.

He’s ripped clumps of my hair out, I thought.

“Get on the floor on your side,” he ordered when I stumbled back in.

Terrified, I did what I was told. “I’m going to break your ribs,” Zachary said.

Then he kicked and stomped on my side. He kept going until I heard a distinct crack.

By then I was so out of it I didn’t feel any pain.

I thought I was dying. Over the next two hours Zachary beat, kicked and taunted me.

Finally, he wiped the blood from my face, said he was finished and I could go. 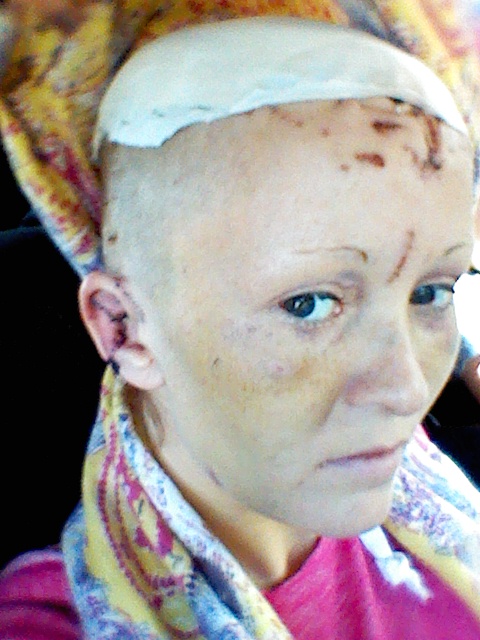 Gross sliced off most of Marilyn’s scalpCredit: Supplied

I begged for an ambulance. “No, they’ll take Capone,” he snapped.

He said he’d drop me off. I thought he meant at hospital.

As we were leaving, he handed me a bloody plastic bag.

I saw wisps of blonde hair and thought it contained clumps he’d pulled out.

He drove me past my mum’s house and then stopped one street down.

“Can I have a kiss?” he asked before letting me go. My skin crawled.

Mum went white when she saw me. “My hair is in this bag mum,” I said, holding it up.

She called an ambulance and I was taken to hospital and rushed into emergency surgery.

A severed artery in my scalp was pumping out blood. I didn’t really know what was going on. 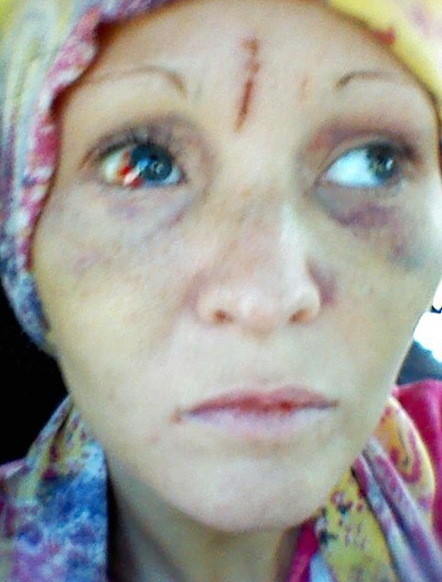 Marilyn burst into tears when she saw her head in a mirrorCredit: Supplied

Hours later, I was sitting up in bed, my head bandaged, when a doctor walked in.

Bluntly, he said, “Your hair isn’t going to grow back.”

“Your scalp has been cut off, right down to the bone,” he said.

I gagged in shock, realising that what I thought had been clumps of hair in the bag was actually my skin with hair attached.

Zachary had scalped me, like something from an old cowboy movie.

And he’d done it with my own knife. He was arrested.

Meanwhile, when my dressing was changed I asked for a mirror. 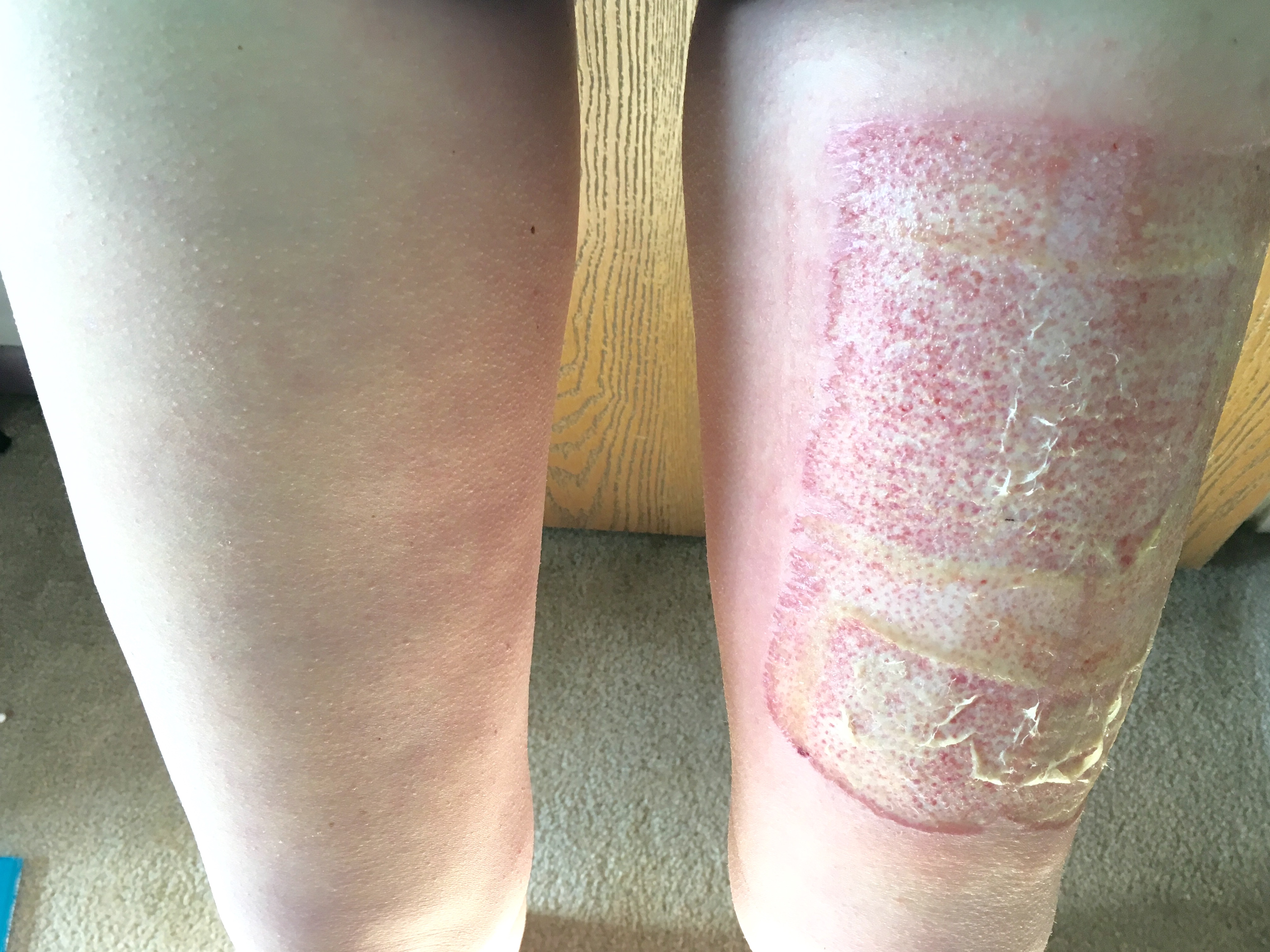 She also suffered horrific injuries to her legs, hands and arms, plus broken ribsCredit: Supplied 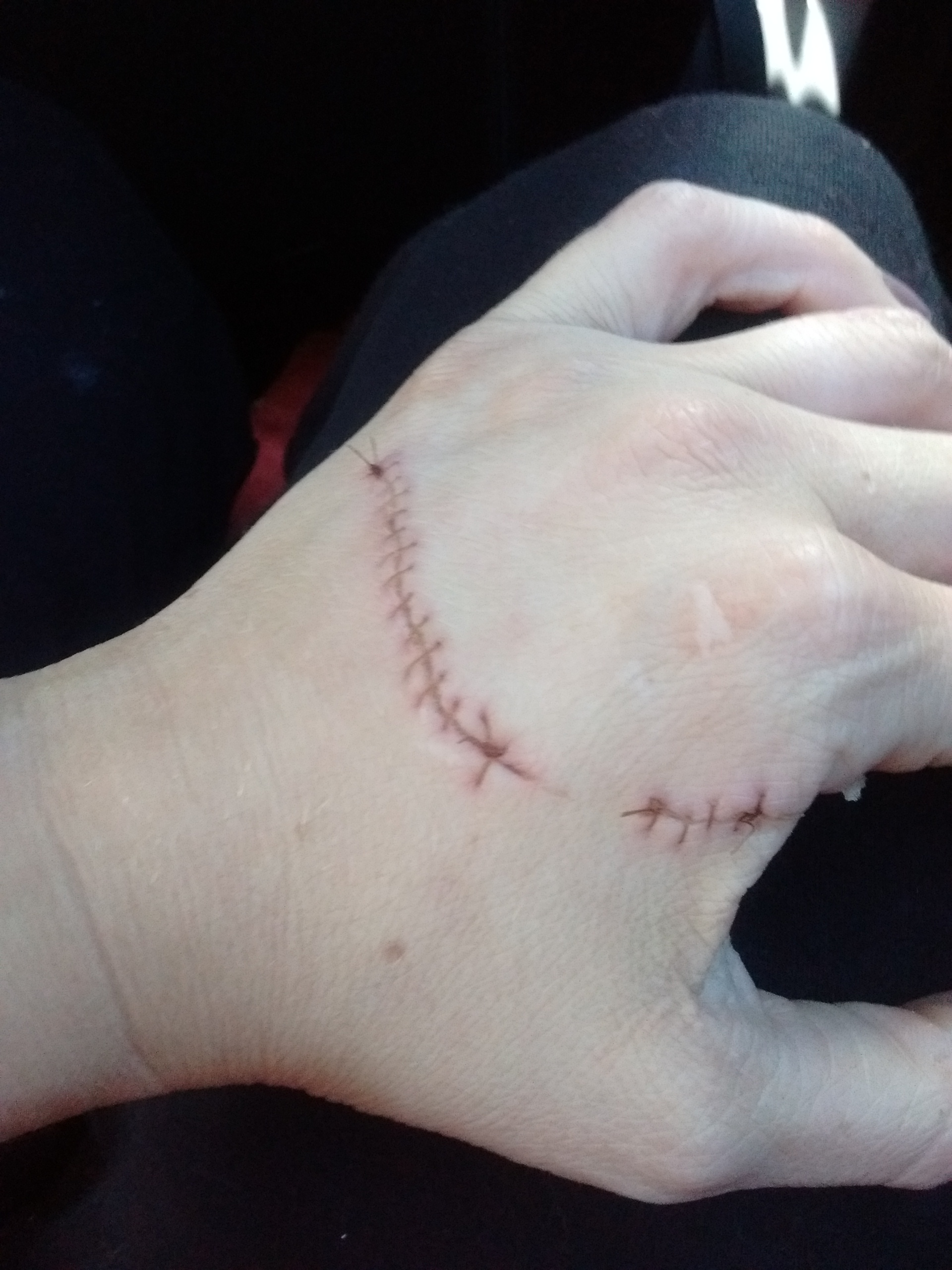 Gross was jailed for 20 years for the two-hour assaultCredit: Supplied

I burst into tears when I saw my head.

It was a raw bloody mess, like something from a horror movie.

“He could have killed you,” mum sobbed.

“He wanted me to live, to look in the mirror every day and be reminded of what he did.”

It was the cruellest thing imaginable. 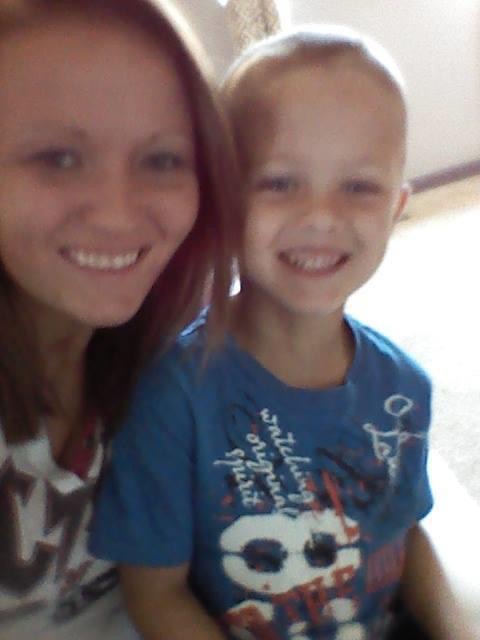 Single mom Marilyn with Carter before the attackCredit: Supplied

I had numerous surgeries to try and repair the damage. But it was so extensive.

Zachary had sliced back from my eyebrows back over my scalp. I lost over 50 per cent of my scalp.

Surgeons took skin grafts from my upper thigh, but there was only so much they could do.

I’d never get my long blonde hair back over most of my scalp. My ear was mutilated too.

But they’d found my pink knife with bits of skin and hair attached.

The incisions in my scalp were neat and linear, not like dog bites. 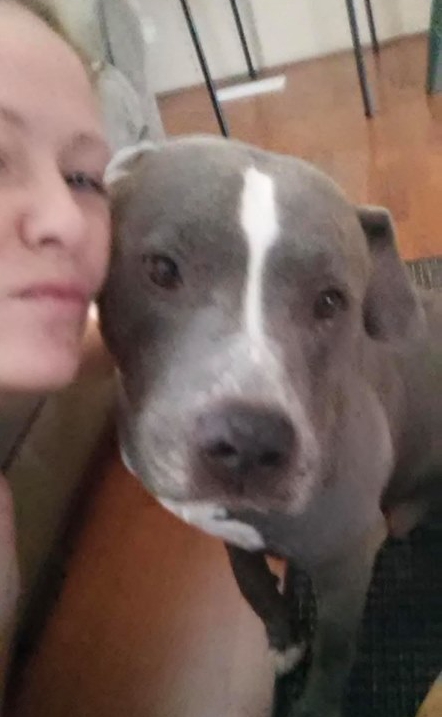 She thought pit bull Capone was ‘a sweetie’Credit: Supplied

I wore a knitted woollen hat when I left hospital and hardly went anywhere without a hat after that.

The hair on my remaining scalp continued to grow and I styled it to try and cover the scalped areas. But it looked like a bad combover.

Wigs were hot and uncomfortable. I felt like people were staring at me everywhere I went.

Sometimes I caught sight of myself in the mirror and burst into tears.

At Zachary’s court case he still denied scalping me.

“I feel horrible for what happened,” he said, but blamed Capone, who’d been euthanised.

In March 2017, Zachary was jailed for 21 years for first-degree assault and other offences. 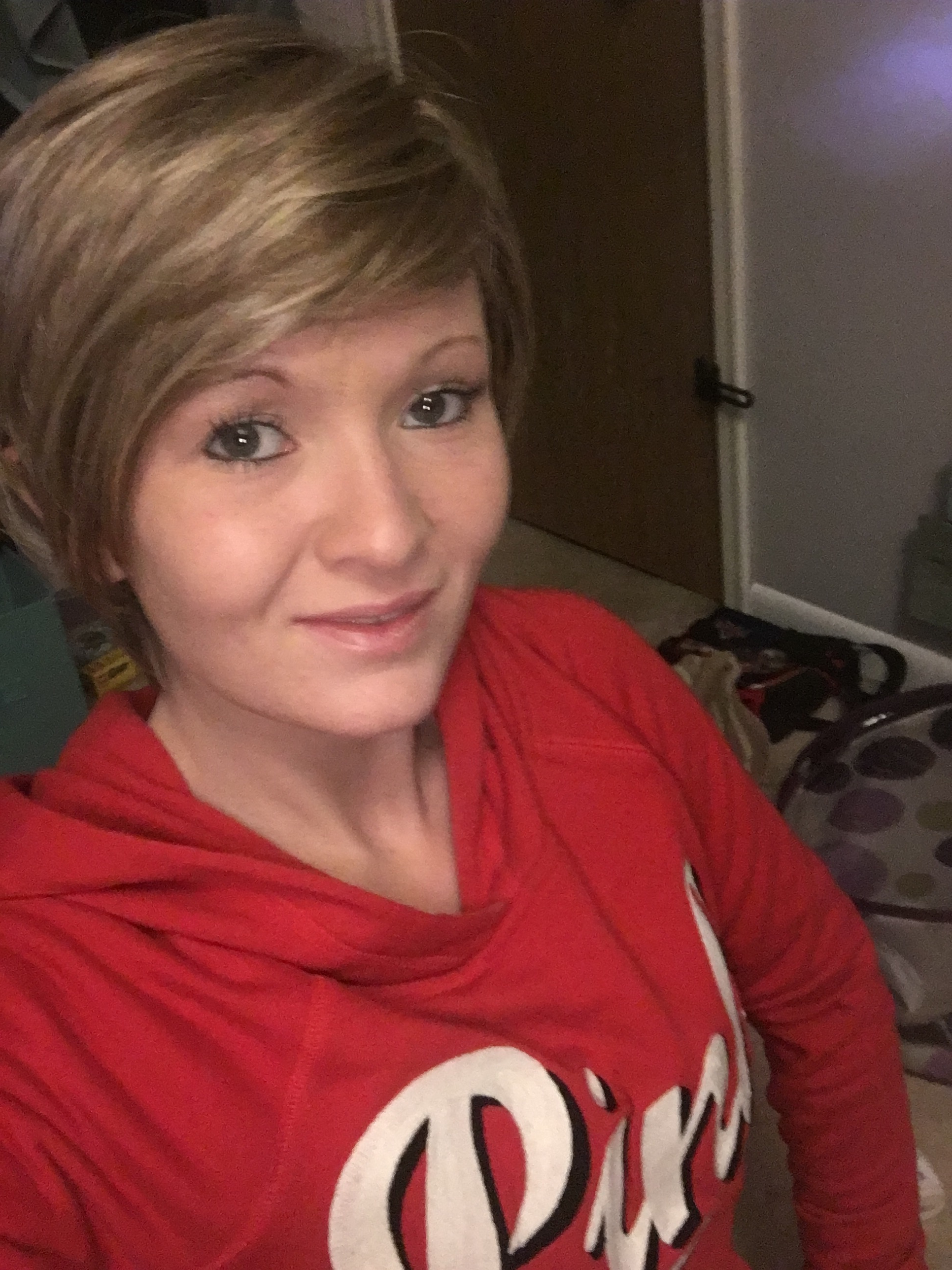 I’d met someone else just before. He wasn’t bothered about my scalp.

We had a little girl, Evelyn.

A couple of years later I had another little boy, Storm, three in December.

Life goes on and at least Zachary can’t hurt anyone else.

Sadly though, I don’t recognise the old me in photos before Zachary’s attack.

In those photos I look happy, a young mom, full of the spark of life.

The light in my eyes has gone now.

My hair used to be one of my best features. I put treatments on it, had it cut.

It was nice to sit in front of a mirror and brush it out.

And I never ask my kids, ‘Does mummy look pretty’.

If you or someone you know is affected by any of the issues raised in this story, call the National Domestic Violence Hotline at 1-800-799-7233 or chat at thehotline.org.

Boy, 5, SCALPED in savage attack by pack of six pitbulls on way home from candy store