A FRUSTRATED mum has revealed how her husband wants a “day off” parenting – even though they both work.

Posting on Mumsnet, she explained her husband is the “breadwinner” and has “old fashioned values”.

A mum has revealed her husband wants a ‘day off’ from parentingCredit: Getty

But he’s been slated by her fellow mums, who believe he is a “sexist” and a “misogynist”.

The mum titled her post: “Breadwinner husband feels childcare shouldn’t be equal & wants ‘day off’ for himself”.

But she also works, as they “can’t afford” for her to be a stay-at-home mum.

“My husband earns 3x more than me and has old fashioned values. (Men=work, women=deal with child),” the mum explained.

“He feels that because he pays the mortgage, bills and most of the food shopping that he is entitled to do less childcare and have days off to himself (where I take DS (darling son) out to play dates or just generally stay out of the house, so he can do his own thing).

“Whenever I ask him look after our toddler so I can do something for myself like haircut, or dinner with a friend, he’ll make it out to be an inconvenience and will certainly have a good moan about everything he does for the family and that he ‘gets nothing back’.

“He doesn’t have a great social life either as we’ve moved somewhere away from his friends.

“I’d like another child and he would deep down, but he’s refusing right now because he knows he’ll be ‘stuck’ with even more childcare as I care for a newborn.

“I work 4 long days a week, have my son at all other times. I’m either working or looking after my son. I don’t get time to myself.

“My husband has my son 1/2 day a week (which I’m grateful for as I’m aware many dads don’t do this) and is generally around with us at the weekend.

“Question is- am I right I thinking it’s unfair that I get little time to myself, yet that doesn’t seem to matter because ‘that’s what mums do?’ What are other peoples arrangements in similar situations?

“I contribute financially to my son, all his classes, pay his nursery fees and so on. All my salary goes on DS. Yet he’s the one who needs more ‘him time’ because he pays out more?

“I should add, he is great with our son when he’s here and he is here all weekend, he does some cooking and buys all our food so it’s not totally one sided.

“He just seems to want more time to himself and feels he’s entitled to it as he contributes more financially, it just drives me mad!” 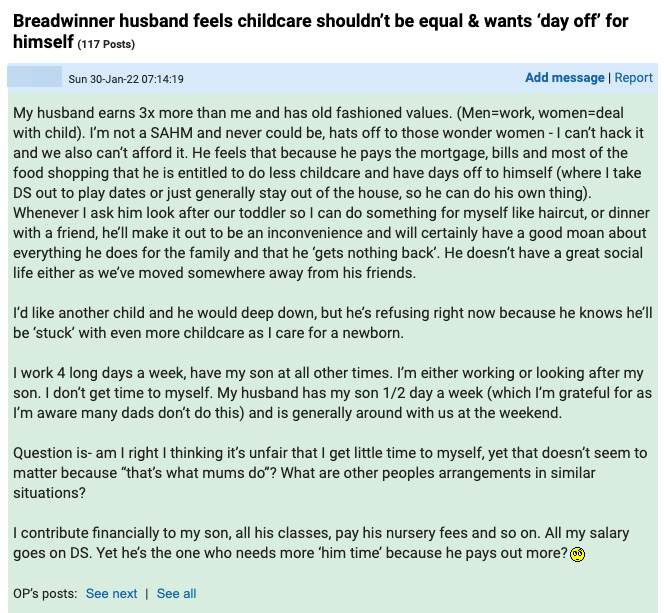 The dad has been labelled a ‘sh*t dad’, ‘lazy’ and a ‘misogynistic t*t’Credit: Mumsnet

One said: “He absolutely does not want another one (child), I’m astounded you do with this lazy man who can be arsed to look after his child and evidently has zero respect for you.”

While a second wrote: “Your poor son having such a sh*t dad. Describing his misogyny as a ‘value’ is a bit of a stretch.

“Of course treating you like his staff and opting out of parenting his own child is not acceptable.

“The fact that some other men are even more neglectful of their children and disrespectful to their partners is hardly a redeeming factor. Let’s set the bar somewhere higher than the ground.”

And a third commented: “He’s an old school misogynist. Nothing is going to change his deeply-held world view that you deserve less than him because you are a woman…

“You can’t make him treat you as an equal and the resentment will eat you up. Don’t have another baby with him.”

Another mum said: “Sorry but apart from anything else the fact he wants you out of the house on his ‘day off’ is just ludicrous, mean, entirely awful. Yuck.”

Others claimed: “He feels he is entitled because he views you as the hired help, and your child as a job to do. He feels he has contributed his part, which is to pay for ‘the help’.”

While one slated the mum, saying: “So you had a child with a sexist and now you’re frustrated that he’s a sexist? (And he doesn’t want another child ‘deep down’. He doesn’t want the one he’s already got.)”

Others asked: “Why does he not want to spend time with his child ?” and said: “Maybe he’d be happier if you were divorced and he could have as much time to himself as he wanted.”

The mums insisted all money, chores, childcare and free time should be divided equally – even with stay-at-home mums and working dads.

“Then tell him you want some time off too. Stand your ground.”

Others suggested the mum needs to be book a weekly appointment for herself – to get her hair, nails or eyebrows done, shop and have a coffee out.

One mum summarised: “It shouldn’t matter who earns more money, a relationship should be about sharing the workload equally, so equal effort.

“He gets paid a higher rate for his hours of employment, but is he actually working harder than you are when you’re at work? Doubt it.

“If he can’t see this, then don’t have another child with him. He doesn’t even want to spend time with the one you already have.”

Another mum asked for advice over her ex sharing a bed with their EIGHT-year-old daughter, as she believes their girl is too old for the arrangement.