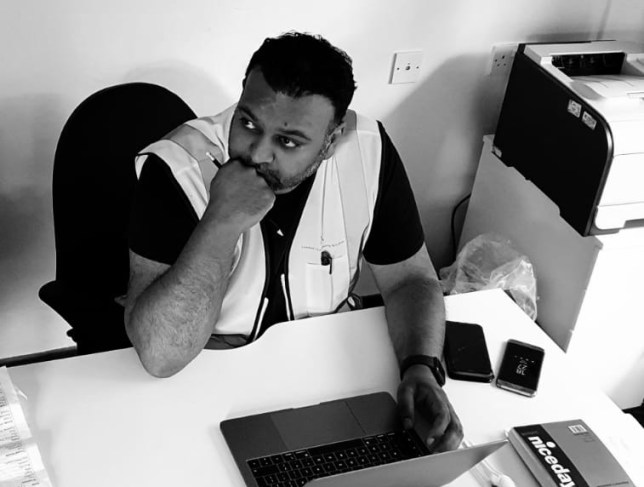 Sometimes I have to sit back in the evenings, take a breath and really let the magnitude of what my team of 350 volunteers and I achieve, six days a week, sink in (Picture: Taz Khan)

By 10.30am on a typical Saturday morning there are already 570 people queued up along a Wembley street waiting for food.

By the end of the day, we’ll have expected that number to hit 900 – if not more.

I’ve been operating London’s Community Kitchen for seven years now, but we’ve been busier than ever since the start of the pandemic.

Every week, across Harrow, Barnet, Wembley and Hoxton, we feed over 15,000 people, with hundreds of them waiting patiently on the surrounding streets as they take their turn to collect meals and groceries.

Sometimes I have to sit back in the evenings, breathe and really let the magnitude of what my team of 350 volunteers and I achieve, six days a week, sink in.

When I started my career in hospitality three decades ago, I could never have imagined that it would lead to having an impact like this.

After leaving school, I moved from Manchester to the capital and got a job in a kitchen in Walthamstow, east London.

I discovered that I was quite good at cooking, despite not having any professional training, I got a Cordon Bleu scholarship and ended up working all over the world and even with Marco Pierre White.

In 2014 I decided to come back to London to spend more time with my family, as my mum had fallen ill. Little did I know, that it would signal the start of my charity work. 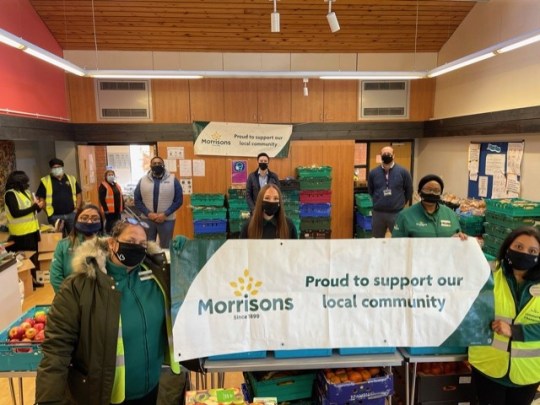 In April 2014, we opened our first surplus food market on the grounds of a church in Barnet for local families to have access to free food (Picture: Taz Khan)

The years I’d been away had changed the face of Harrow; I could see many people were struggling with food poverty.

Every school day I’d make a packed lunch for my son, Dawood, then seven, but gradually he began asking for more food, even tripling the amount he was bringing in every day.

I grew worried. ‘Is my son getting bullied? Is he being forced to give his food away?’ I thought.

But when I asked Dawood, he’d a simple explanation – there was a kid who only had leftover crispy fries from the chicken shop and was drinking water from the tap. ‘I’m just handing him over my food so that he can eat,’ my lad said.

He didn’t even know his name, he wasn’t in his class – my son just saw that there was a fellow child in need, and he could do something to help.

‘Dad, all I know is that he’s hungry,’ he said. That really struck me.

I called the headteacher and said that we wanted to help – so with a few friends, I started up a breakfast club, where children could eat before lessons started.

As much as this was helpful, it soon became clear that many children weren’t getting properly fed at home – this became their only reliable meal of the day.

Determined to do more, I went up to Leeds and spent three weeks with Adam Smith, who runs The Real Junk Food Project, to learn about all the great work they were doing using surplus food. It showed me how straightforward it could be to turn good produce that’d go to waste and help it be useful for the community.

I knew I had to do the same in London. With the help of my friend Paul Anderson Wash, in April 2014, we opened our first surplus food market on the grounds of a church in Barnet for local families to have access to free food.

A year later, we opened the café, where we’d provide gastro-style, high-end meals for free. Many of the locals had never been to a restaurant in central London, so we brought the fancy menus to them: salad niçoise, ravioli with truffles – the lot.

Since we were receiving food from restaurant distributors, there ended up being a lot of groceries that people in the local community didn’t know how to cook. So we started running a range of classes that would give families cookery skills for life.

Sadly, with the pandemic, in-person learning had to stop, and we scaled up our main operation of providing fresh-cooked meals, as well as bags of groceries, to those who need it.

On average, we’re taking in 50 metric tonnes of food a week, and 75% of it is surplus food from major supermarkets, wholesale suppliers and restaurants. All donations are welcome, because we know how much impact it can have and how far it can stretch. There’s enough food in London to feed every single person living here.

The people I’ve met through London’s Community Kitchen are some of the most wonderful people – such great characters.

One of our regulars, Frank Willis, is an 84-year-old gentleman who comes along to one of our sites every week to pick up food for his three elderly neighbours. One is blind, one has cancer and another is sick and bed-bound.

He collects food bags and will cook for and serve his neighbours. It’s just amazing to see him still helping others in his eighties. Frank’s told me that without the Kitchen, he wouldn’t be able to afford this kindness. For him, having this free access is a lifeline. 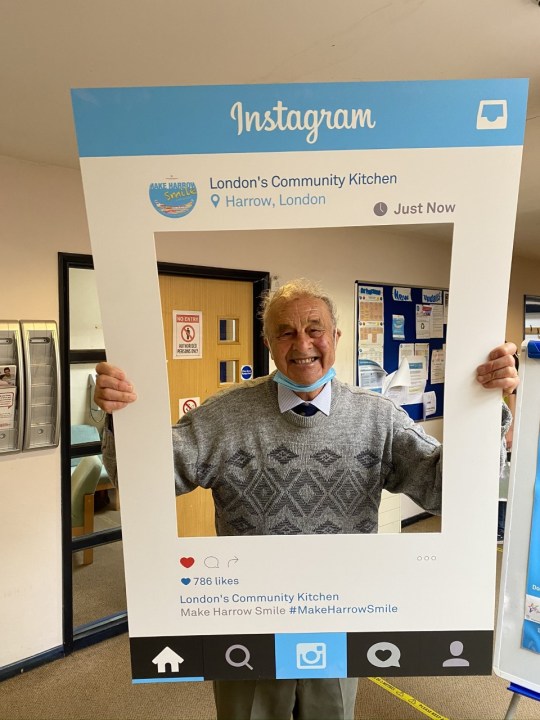 One of our regulars, Frank Willis, is an 84-year-old gentleman (Picture: Taz Khan)

It’s the same for so many others. Some people use the food bank who are in part-time employment, and on the outside, everything’s fine. They might arrive in a car and wear nice clothes, and have enough money to get through the first three weeks of the month. But in that last week, they’re left with nothing to eat.

Another of our regular visitors told us that they were on furlough, but are on the verge losing their house.

There’s another woman who has two teenage daughters and issues with her knees that means she can’t always make it to the Kitchen. When all three of them come, they’re always in tears, though. When I asked why, the girls told me that sometimes their mum won’t eat so that they can – they’re overwhelmed by the situation.

We hear many similar stories every single day. A lot of people told me that before the pandemic, they’d never have dreamed of going to a food bank. Very quickly, they found that they were queuing in the same line they would have previously passed by.

Before I opened the Kitchen, I’d see someone who was homeless on the street, give them a few pounds and go on my way – that was what I thought poverty was. In the past seven years, I’ve had to re-educate myself on what people are going through.

It’s heavy on the heart. In the first few years, it was very tough. I occasionally found myself drinking more than I usually would because I was so stressed with the situation. It’s frustrating because I just want to help, but there’s only so much I can do.

It’s not like I’m now immune to feeling what’s going on – but I’ve come to the realisation that I’m doing as much as I can. That puts my mind at ease.

That’s how I have to explain the feeling to the hundreds of volunteers who come to help and get distraught with these images and stories. Most have cried at some point in the operation, and I completely understand.

I tell them that they’re fortunate to be in the position to address these needs and help. I say, ‘Hold your head up high; don’t cry. There’s power in the community here.’

So far, that’s probably been the greatest lesson I’ve learned – the sheer amount of untapped power in the community. Everyone, including myself, is involved on a volunteer basis – there’s no major Government funding.

The fact that hundreds of people are queueing for hours to use the kitchen is heartbreaking. I’m doing all I can but I wish the Government would do a lot more to help change the situation.

My son Dawood is 14 now, and he helps out constantly – I’m so proud. It’s a privilege to be in a position to help.

It was tough before, but Covid-19 has really brought people to their knees financially. As the country starts to recover, it’s going to be a while before people’s circumstances really change, especially after furlough ends.

All communities will be facing unemployment. But London’s Community Kitchen will be here to make good on our mantra of ‘zero waste, zero hunger’ as best as we can.

When we work together, there is so much benefit for those in need.

Noah’s Ark on the MOON will preserve 6.7million species in case Earth is destroyed – will need 250 rocket trips to build