One of the most frustrating things about having a family is that you can no longer just pop on your shoes, chuck on a coat and leave the house.

If you’re a parent who struggles to actually make it over the threshold of your house in good time because of all the packing and preparation, you may be interested to hear this mum’s tips.

TikToker Csilla shared her expert tips for getting out the house on timeCredit: TikTok/csilla.love 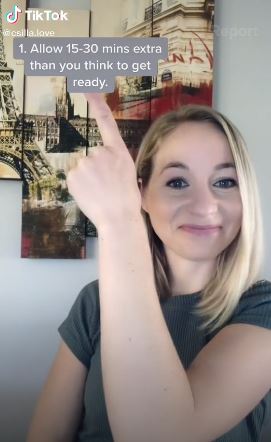 Mum-of-two, Csilla uploaded a video to TikTok with six tips for leaving the house on time – and they are very smart.

Allow more time than you think you need

Csilla said: “Allow 15-30 minutes extra than you think to get ready.”

It doesn’t come naturally to most of us to allow excess time but it does reduce the stress.

An additional 20-30 minutes allows for those unexpected problems that so often rear their ugly head when you’re looking after children.

Have a playlist on hand

The most genius of all the suggestions is setting up a smart speaker and programming a playlist that counts down to the time they have to leave.

And the bonus here is that you get to do it with a fun morning soundtrack!

Csilla said: “Do as much as you can the night before.”

This includes, leaving clothes out ready the night before, shoes by the door and packing lunches in advance.

Csilla said: “Use charts/checklists to help children plan their morning.”

Drawing up a handy list (or series of pictures depending on the age you’re working with) is great to help your kids with task management.

Encourage your children to check what’s next on the list and tick off the jobs as they go.

Csilla said: “Be clear with your expectations and remain consistent.”

Pretty straightforward but sensible advice there.

It’s so easy for children to feel overwhelmed when new systems are put in place so it’s important to encourage them.

Csilla said: “If things get out of hand – slow down and give love, hugs and reassurance.” 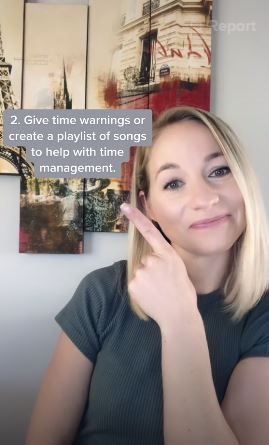 Elsewhere in parenting, mum shares how she uses an Apple AirTag as a tracking device on her kids but parents are divided.

Plus I’m trolled for letting my one-year-old use the stove to cook scrambled eggs but I don’t care, he’s perfectly safe.

And my ex’s mum is demanding my baby calls HER mummy instead of grandma, he doesn’t see the problem but I’m fuming.

Jenelle Evans reveals her kids have scribbled all over the walls as family chows down on pancakes, bacon & gravy