INCREDIBLE footage shows the moment a brave security guard dramatically reverses a van into a gang of moped-riding robbers. 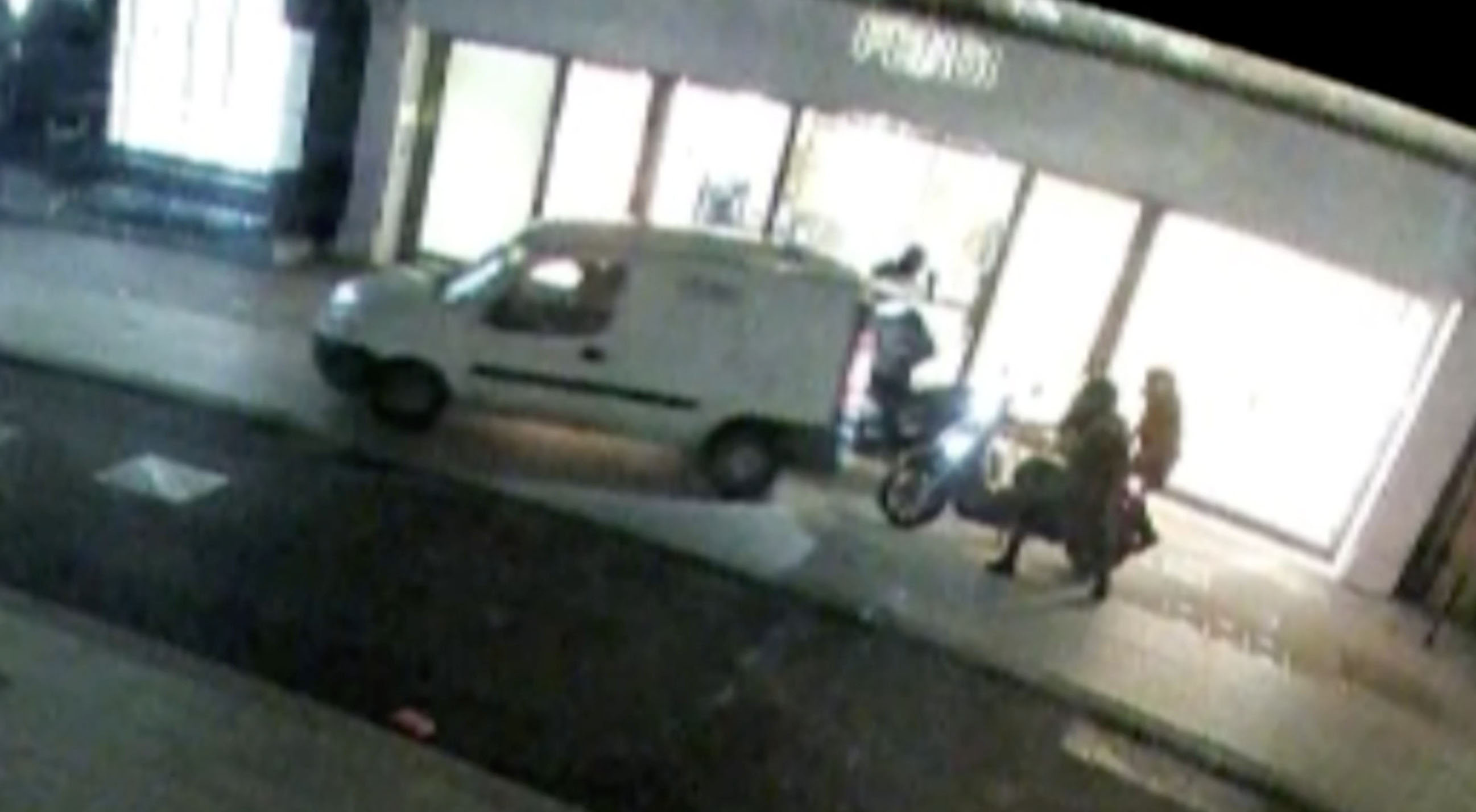 A security guard stops a raid on a London store by reversing his van into the criminalsCredit: Universal News & Sport 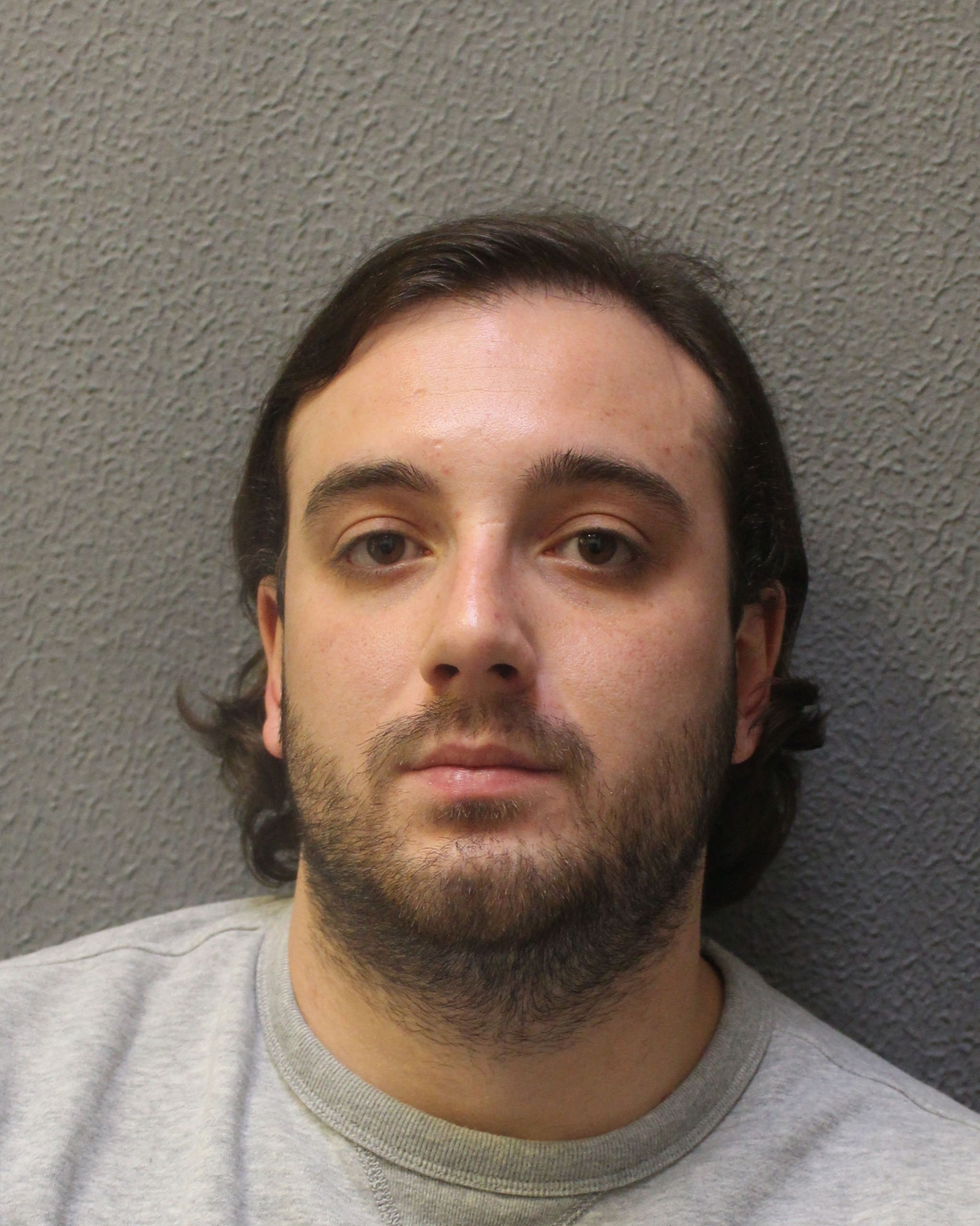 Alfie Atherton has been jailed for more than 10 years for taking part in a series of ‘smash and grab’ raids in LondonCredit: Universal News & Sport 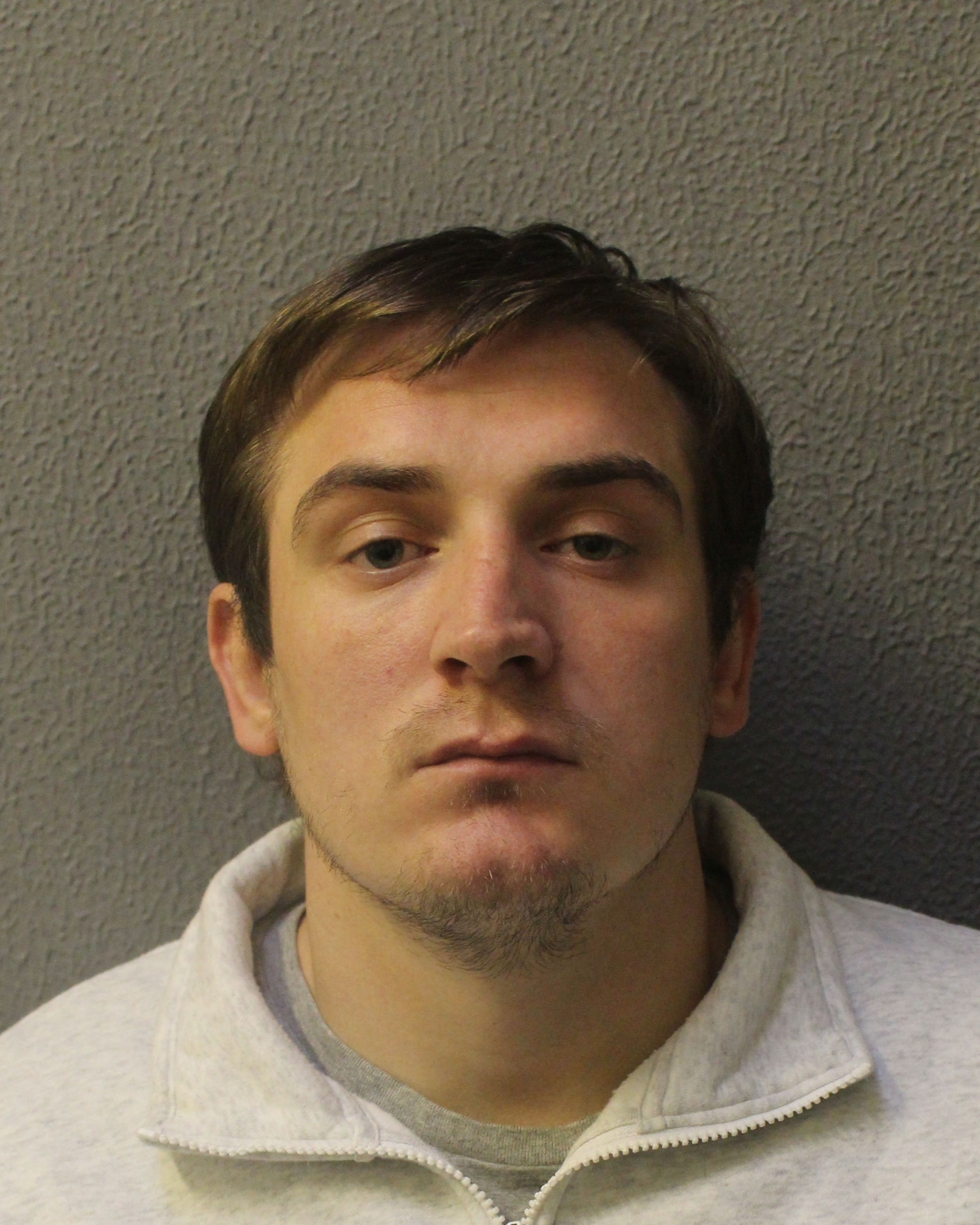 However, the criminals were forced to flee the scene when a security guard rammed his vehicle into one of the bikes – causing some of the motorcycle’s trim to break off.

This was one of a series of a robberies carried out by two of the suspects in the video.

Alfie Atherton, 29, of Tower Hamlets, and Reed Roberts, of Islington, have been jailed for stealing more than £40,000 in cash and perfume in a number of raids in London’s West End.

Atherton was sentenced to more than 10 years while Roberts was jailed for over seven years.

Moments before the security guard’s dramatic intervention, the gang had tried to rob another store on New Bond Street at 1.40am on March 3 last year.

In that attempted raid, one of the bikes smashed into a door causing it to break – however they were prevented from gaining entry due to the shop’s security shutter.

Yet, Snaresbrook Crown Court heard on Friday how Atherton and Roberts’ did carry out a number of successful robberies.

On February 1 last year, at around 1030am, a guard making a money box delivery to Sainsbury’s in Clerkenwell Road was attacked and forced to hand over the cash.

In another CCTV, released by police, a man in a fluorescent jacket and motorcycle helmet is seen grabbing the box before fleeing on a bike driven by another suspect. 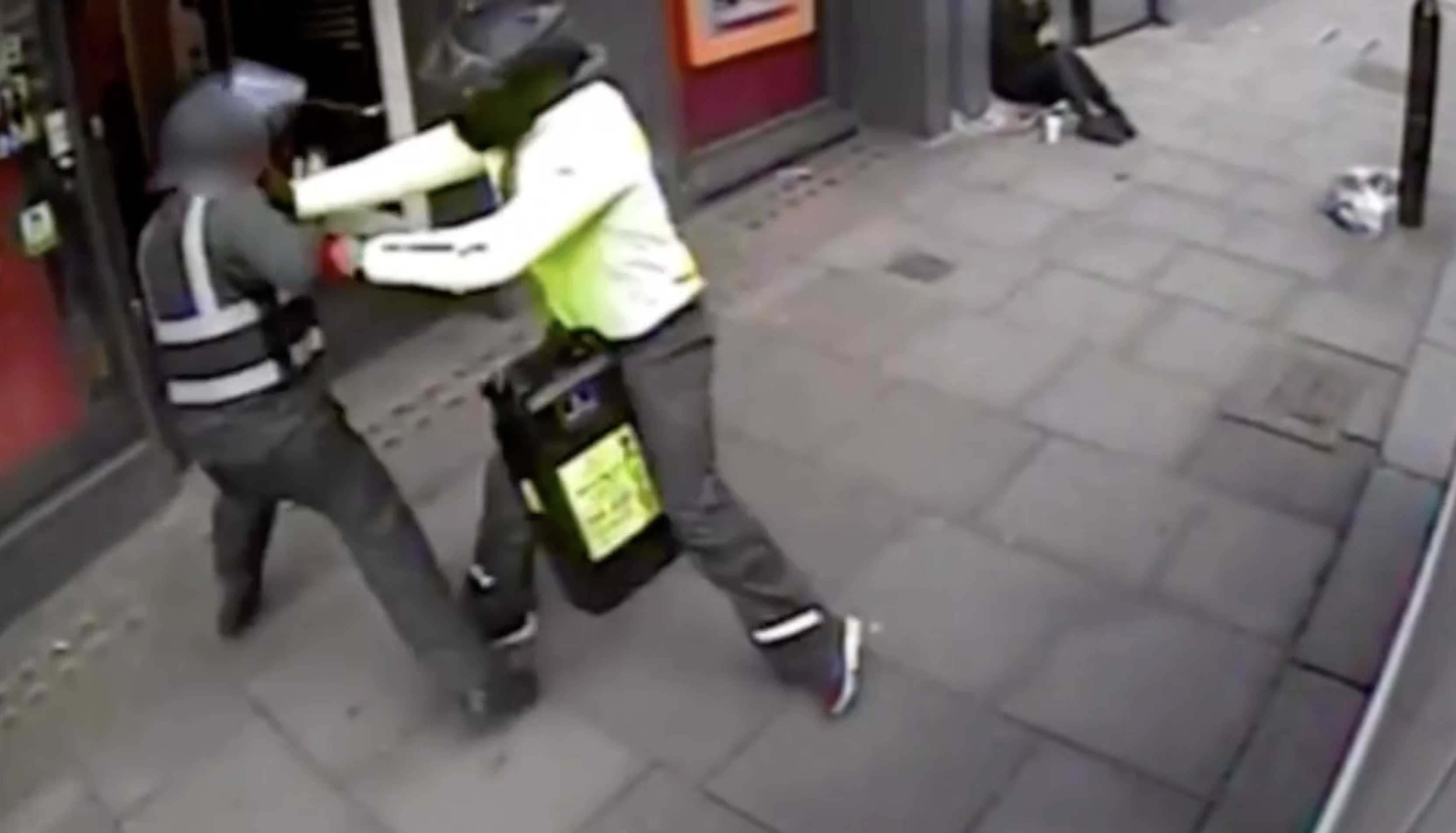 A criminal steals a money box carrying more than £20,000 outside a supermarket in LondonCredit: Universal News & Sport 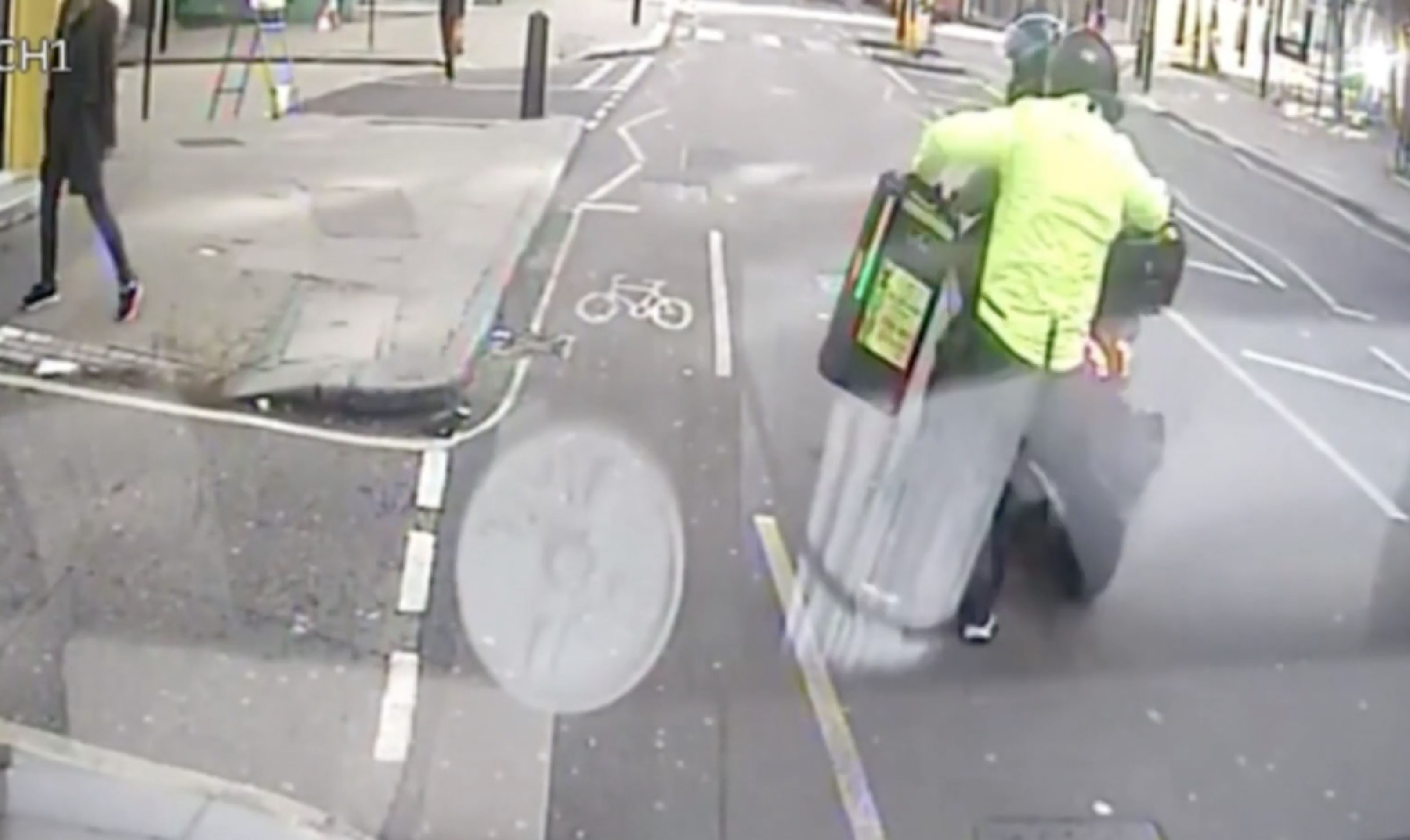 The robber grabbed the box and then fled on a bike driven by another suspectCredit: Universal News & Sport 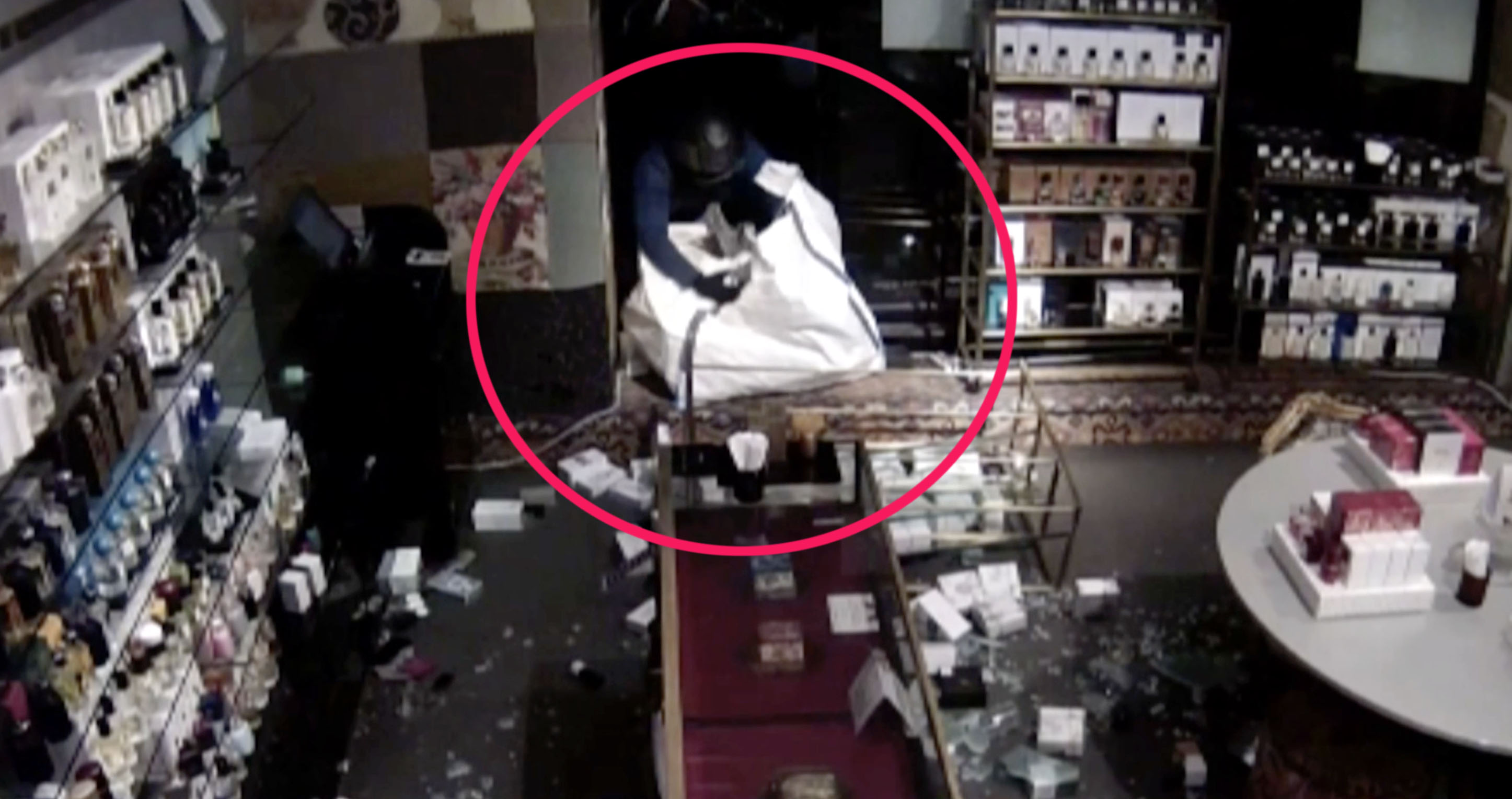 A witness says they later saw two men cutting the box – which contained £22,000 – open with an angle grinder in a nearby street.

Investigators from the Met Police’s Flying Squad began probing the robbery and managed to spot the riders on more security cameras in a car park on Flaxman Terrace 15 minutes before the raid.

They then found footage of the suspects arriving at the car park in two cars an hour previously.

Cops then managed to link the pair to a ‘smash and grab’ robbery at the Liberty London store in Marlborough Street, three days prior.

That incident, at 1.17am on January 29 last year, saw two men throw a concrete slab through a window of the luxury shop – causing £1,000 of damage.

One of the robbers, who police identified as Atherton, climbed into the shop and stole more than £20,000-worth of perfume.

When he was leaving the store, a security guard confronted him prompting the criminal to pull a ‘Rambo-style’ hunting knife.

The court heard how Atherton told the man “get back or I will stab you.”

Met police then linked Atherton to the two attempted robberies on New Bond Street on March 3 where four suspects caused more than £45,000 of damage.

Detective Constable Lenny O’Keeffe said: “Atherton and Roberts caused chaos in the West End, even threatening and using violence, in their bid to steal cash and high-value goods.

“Atherton even caused more than £45,000 worth of damage to two stores when he attempted to steal even more expensive goods.

“They soon discovered that crime does not pay and thanks to the investigative work by the Flying Squad, they will instead be spending a lengthy period of time behind bars.”

Why your hay fever might be much worse after lockdown