FORMER UFC featherweight champion Max Holloway left Calvin Kattar a bloody mess in their UFC Fight Island 7 showdown, in which he put on an absolute clinic.

The fan favourite threw down with the in-form Kattar in the main event of the UFC’s first show of 2020. 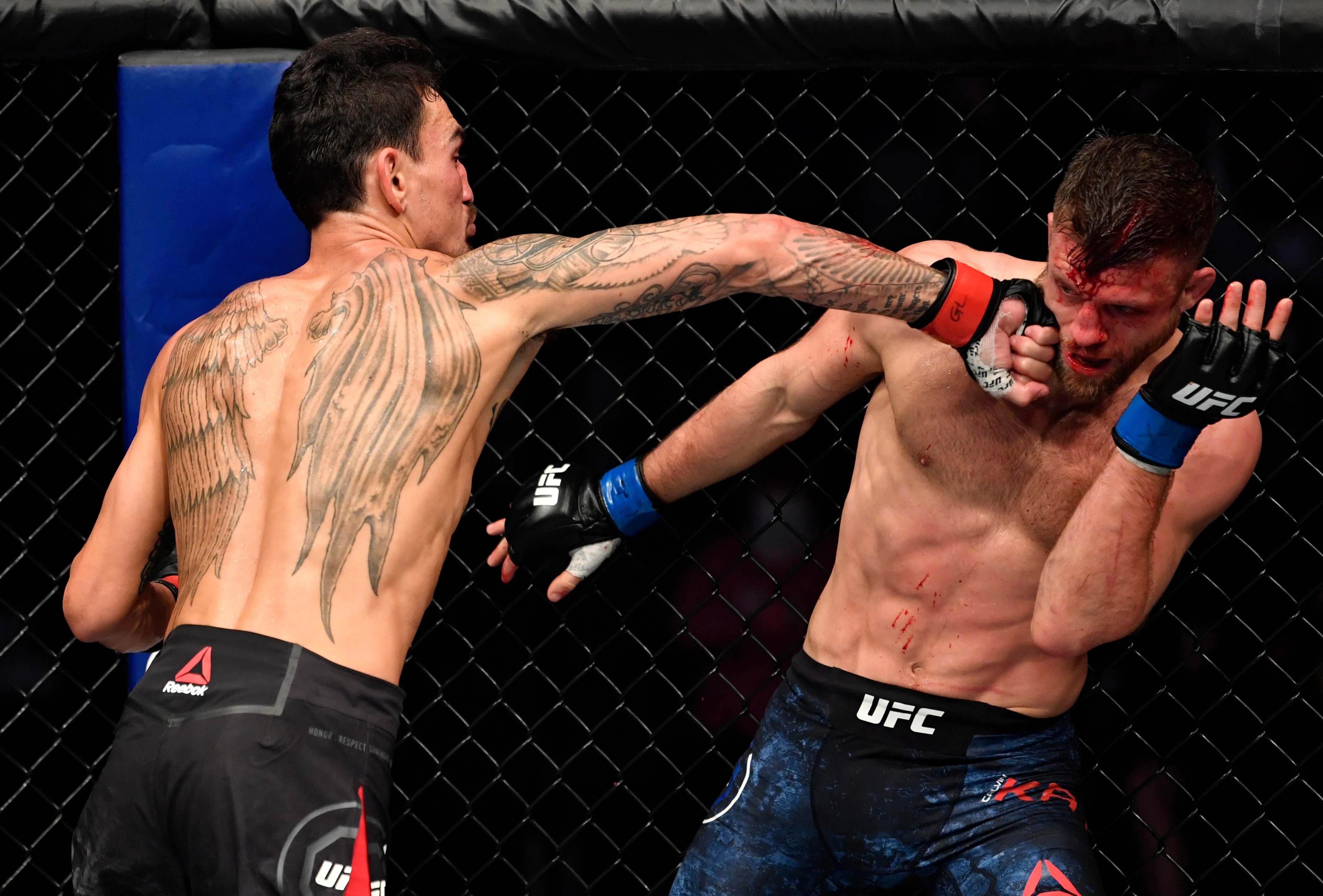 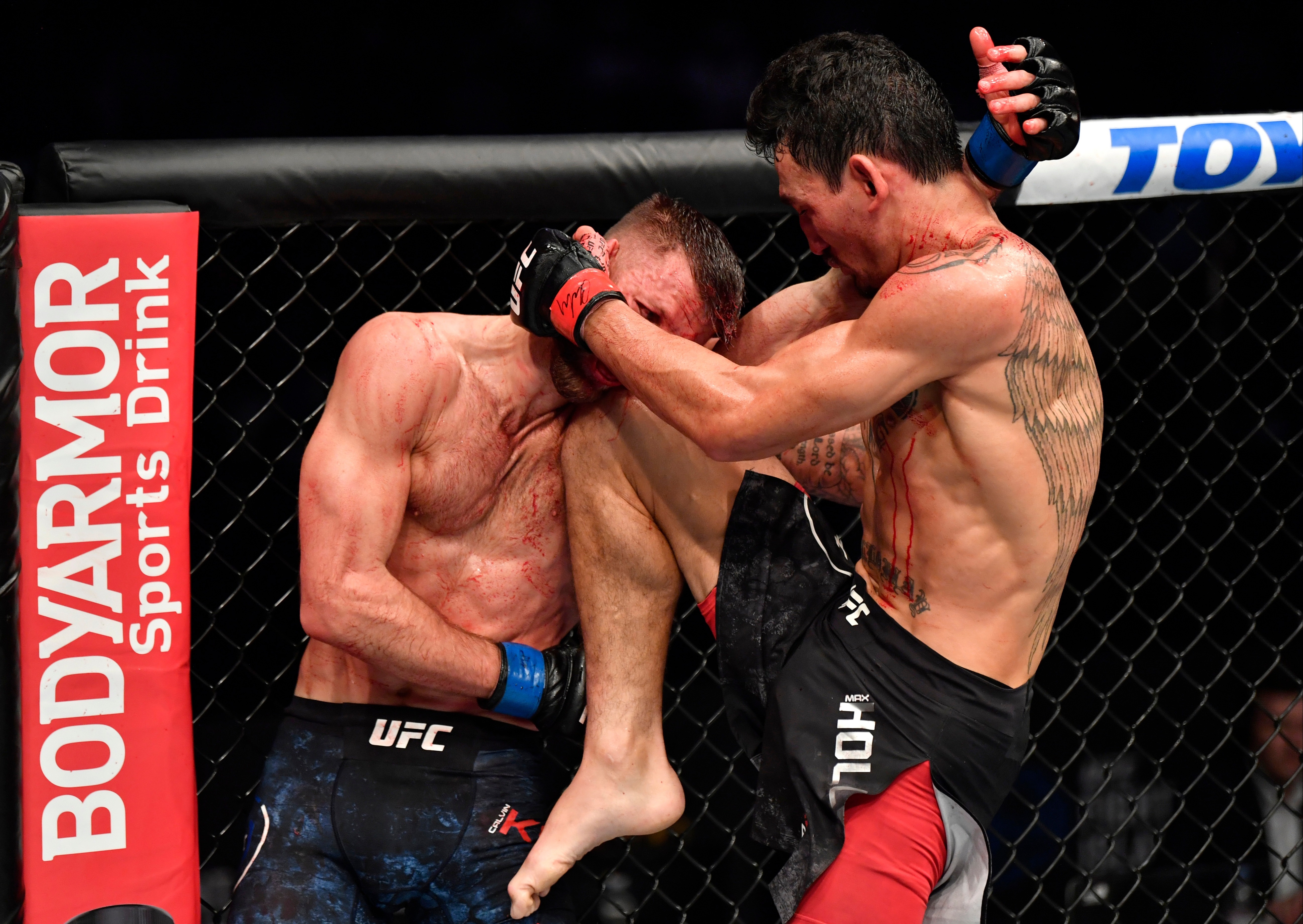 And he put on an imperious performance to leave the 32-year-old dripping with blood and on the receiving end of a unanimous decision loss, with the judges scoring the contest 50-43, 50-43, 50-42.

Holloway came out of the blocks a lot more aggressive than we’ve become accustomed to seeing, pressing forward and pumping out his jab.

Boston’s Kattar was determined not to allow the fan favourite take the centre of the octagon and immediately stepped to him.

Holloway, however, soon found a rhythm and started to find a home with his combinations. The fan favourite also made good use of leg kicks to try and a take away the mobility of the New England Cartel featherweight.

Holloway landed a huge spinning back kick to the body with 30 seconds left of the first stanza before punctuating it with another flurry of punches.

Aware he lost the first round, Kattar came out more aggressive, pumping out his jab to try and find his range. But an imperious Holloway slipped his range finders for fun before mocking him for missing.

Although he was having trouble finding a home for his shots, Kattar – who had won his last two on the bounce, was still presenting Holloway with some problems.

A left hook found a home on Holloway’s chin and briefly prompted him to reconsider his approach. That reconsideration last only seconds as he pushed forward and landed another flurry of shots.

Holloway went in for the kill with a minute left on the clock after landing a nasty right elbow that busted open Kattar. And he nearly closed the show with a second left in the round after landing a left high kick that wobbled the Bostonian.

To his credit, Kattar didn’t wilt following the close finish and started well in the beginning of the third. But as he so often does, Holloway began to drown him with his pressure and find a home for his strikes.

But a stiff uppercut reminded Blessed that Kattar was by no means out of this contest. Fatigue appeared to stop the normally active Kattar from throwing more than one shot.

That played into Holloway’s favour as he began to anticipated the punches coming his way and return with multiple flurries. And to put another exclamation on the round, he broke out into the robot after avoiding Kattar’s final flurry.

Despite being down three rounds, Kattar’s spirit was far from broken. Although it was beginning to feel like he was at the mercy of the former champ, who made a concerted effort to rip shots to the body as well as the head.

That body work that appeared set to be the undoing of Kattar as it led to him eating wave after wave of flurries.

Kattar, however, somehow managed to survive the storm make it to the fifth round. And he came out swinging after the final restart.

Holloway’s relentless pressure and accuracy continued to take a tool on the face of Kattar, which battered, bruised and crimson red.

Not happy that he was having things all his own way, Holloway roared ‘let’s go’ in the face of Kattar to spark a war – much to the frustration of his corner.

Watch The War On Drugs perform ‘Arms Like Boulders’ on ‘Colbert’