MARTIN Lewis has urged Brits to apply for Green Homes Grant vouchers worth up to £5,000 as the Government plans to slash the scheme’s budget by over £1 billion.

Brits can apply for up to £5,000 in Government help to install extra insulation, eco-friendly boilers, or even draft-proofing and double glazing under the Green Homes Grant scheme. 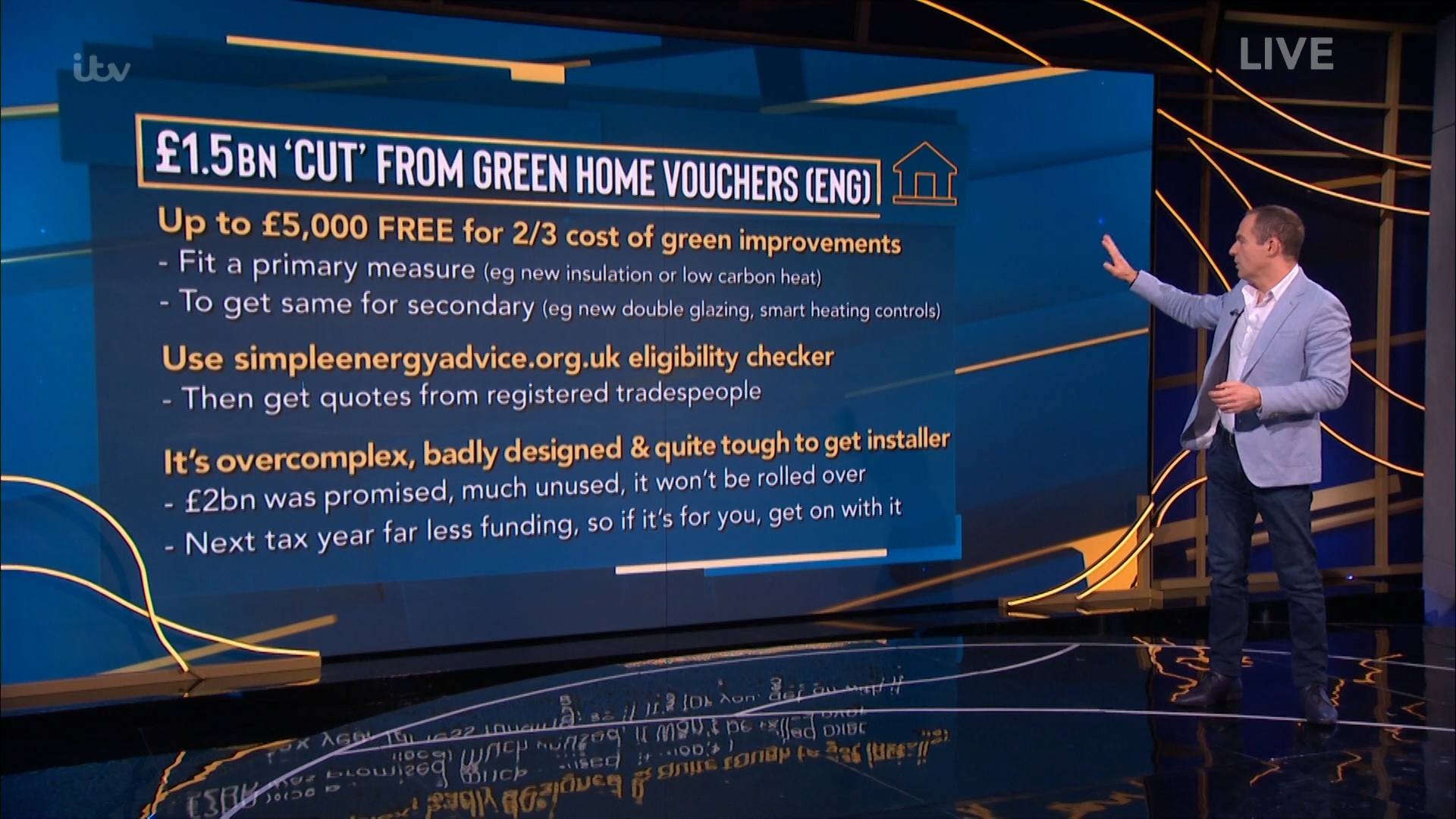 But the MoneySavingExpert founder warned Brits on The Martin Lewis Money Show Live last night that they’ll need to act fast before funding for the scheme is slashed.

His warnings come after it was revealed earlier this week by the Minister for Business, Energy and Clean Growth Anne Marie Trevleyan that money available for the scheme could dramatically shrink.

Do I qualify for the scheme?

ANY owner occupiers or social or private landlords in England can apply for a Green Homes Grant.

New-build properties that have not been occupied before are not eligible.

People who qualify for the low-income scheme (who get the bigger grant of up to £10,000) must receive at least one of the following benefits:

Landlords can’t apply for the low-income part of the scheme.

Of this cash, £1.5bn of funding would be made available to households, with £500m to be divvied out to local councils.

But any money not spent this year will not be rolled over to next, Mrs Trevleyan has confirmed.

She said the funds were “a short-term stimulus, for use in the 2020/21 financial year only”.

Mrs Trevleyan also confirmed last month that just £71m of vouchers have been dished out so far to households as of January 22.

This means the pot available to homeowners could reduce by £1.1bn.

Martin said to head to simpleenergyadvice.org, where you can check to see if you’re eligible to receive vouchers under the scheme.

You’ll have to enter your post code to see what help you could get.

Under the scheme, you’ll have to apply for vouchers to install a “primary measure”, which could include installing new insulation or low carbon heat measures into your home.

Then, you’ll be able to get the same amount of money in vouchers to install “secondary measures”, which could include new double glazing or smart heating controls.

To find out exactly what qualifies as a primary and secondary measure, visit the Green Homes Grant scheme website.

However, Martin warned Brits about shortfalls of the grants.

He said: “I liked the concept of this system when it was first announced, but frankly, the way it’s been rolled out is over complex, badly designed and it’s quite tough to get installers.

If this is for you, I’d get on with it, check it out now. You might find it quite difficult to get to, but still it’s big money, possibly.”

His criticism comes as it was revealed earlier this year that only 20,000 vouchers had been dished out under the scheme.

MPs also expressed grave concerns about the lack of accredited engineers taking part in the scheme to achieve its eco-goals.

Martin made the same criticisms last year, calling the scheme a flop because only 1 in 6 homes could find installers accredited by the scheme to do the work.

One homeowner who wanted to upgrade her home called the scheme pointless after finding she couldn’t apply.

Martin Lewis weighs in on whether it’s cheaper to leave the heating on all day or switch it on when needed.