COPS have arrested a man after three have-a-go heroes were stabbed.

A group of people tackled masked knifemen for two minutes in a bloody robbery in the City of London in front of horrified bystanders.

The fight broke out in Bishopsgate last ThursdayCredit: Twitter 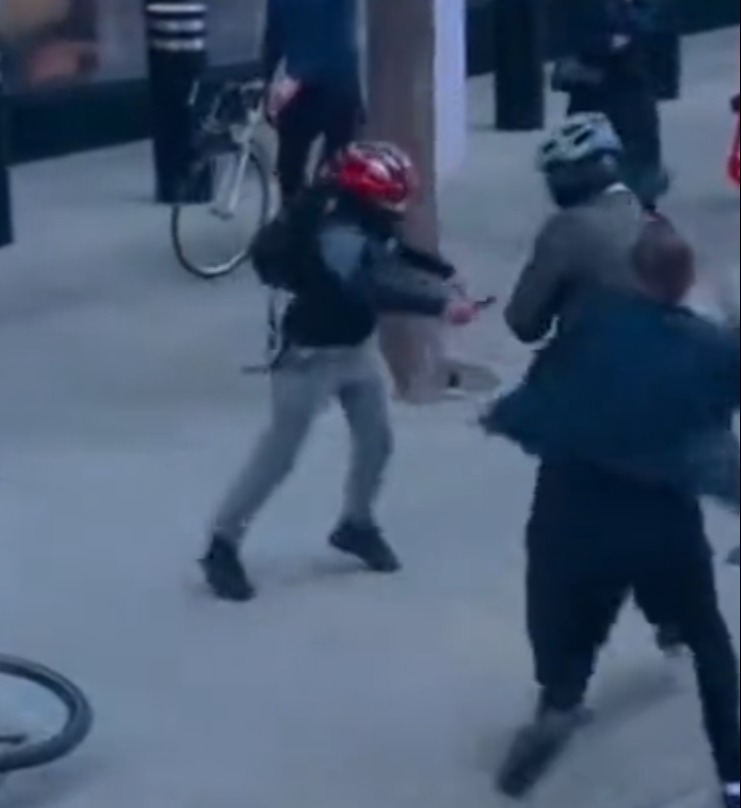 Three people were stabbed as they tried to stop the robbersCredit: Twitter

They were caught on camera as they attempted to stop the thugs who swiped a phone in Bishopsgate last Thursday at about 9.45am.

Footage shows one of the brave good Samaritans yanking a robber from his bike and grappling with him before other members of the public rush over.

As the trapped thief lashes out at the group, an older-looking woman steps in to help and gives him a shove.

She can be seen holding her arm as though she has been slashed at.

The yob then attempts to cycle away – but a moped rider in a crash helmet shoves into him and the brawl continues.

The video ends when one of the robbers pulls out a knife and begins waving it around.

Police confirmed three people were stabbed in the horror while a fourth person was pushed to the ground.

The brawl broke out when two men on electric bikes attempted to steal a phone.

They then began slashing at the victims as they tried to stop the robbers.

The two masked thugs fled the scene with police understood to still be hunting both of them.

T/DCI Colin Bishop, of the City of London Police Major Crime Team, said: “Detectives who are investigating a number of serious offences connected with the attempted robbery and knife attack on Bishopsgate last Thursday have arrested a 25-year-old man in Islington this morning.

“He was arrested on suspicion of conspiracy to commit robbery, grievous bodily harm with intent and possession of an offensive weapon.

“He remains in police custody.”