It is eight o’clock on a dark April evening and I am hunched over my phone, trying to beat the invisible hordes. I had set myself an alarm for this moment, and now I’m going for it, speed running the dialogue boxes for name, address and all the rest. Finally, I click confirm and allow my phone the electronic deep breath of a refresh. There it is: I have two seats for dinner, over three months hence. I’m in.

I’m shocked by myself. This isn’t me. I let other napkin-sniffers, desperate to be first through the door of the next big thing, behave like this. I’m much cooler. Or perhaps not. Odder still: the two seats I have reserved are inside a humble restaurant 12 minutes’ walk away from my house on Atlantic Road in Brixton. It’s called Ichiban Sushi, and opened in 1999. My family went there for years when the kids were small, for comforting rice bowls, sturdy nigiri and more than punchy Thai green curries. The latter was not quite the outlier it might seem. Ichiban is owned by a Thai-Colombian couple. Sometimes at weekends, the food would be brought to us by their bright-eyed 10-year-old son Chris, helping out with the family business.

It turns out that Chris Restrepo was doing more than just fetching and carrying. He was soaking up the intricacies of sushi. He was, he says now, finding a direction in life. At 16, he started in the kitchen. He ate his way around the best sushi restaurants in London and later went to Tokyo. He secured a place at the prestigious Tokyo Sushi Academy. He was ambitious. Now 28, he wanted to bring something back.

‘There is the hiss and pop of the blowtorch’: red sea bream. Photograph: Sophia Evans/The Observer

That something is Kurisu Omakase, Kurisu being Japanese for Chris. It is a sushi tasting menu served twice nightly on Sundays and Mondays when Ichiban is closed, to eight diners. I heard about it from my friend the chef Tim Anderson, who has the ramen restaurant Nanban elsewhere in Brixton. But word has also got around. Endo Kazutoshi of the revered Endo at the Rotunda turned up one night, as did some of the crew from the Araki. Serious chefs are coming down to see what Restrepo is up to.

With good reason. I’ve eaten at the fabulous Endo. I’ve splurged at Umi and purred over Sushi Tetsu. I do not hesitate to say that what’s being served here is some of the very best sushi in the UK today. Yes, there’s oceans of technique on display, but there’s so much more than that. There is character and narrative and wit. Restrepo is chef as story teller. The old tables where once we were served those Thai green curries, are pulled around to form a low counter. He takes up position on the other side with his brazier of glowing coals, his blow torch, sauces and, of course, his blonde-wood case of fish. In a neat reversal it is now his mother, Suwannee, who fetches and carries from the back kitchen. 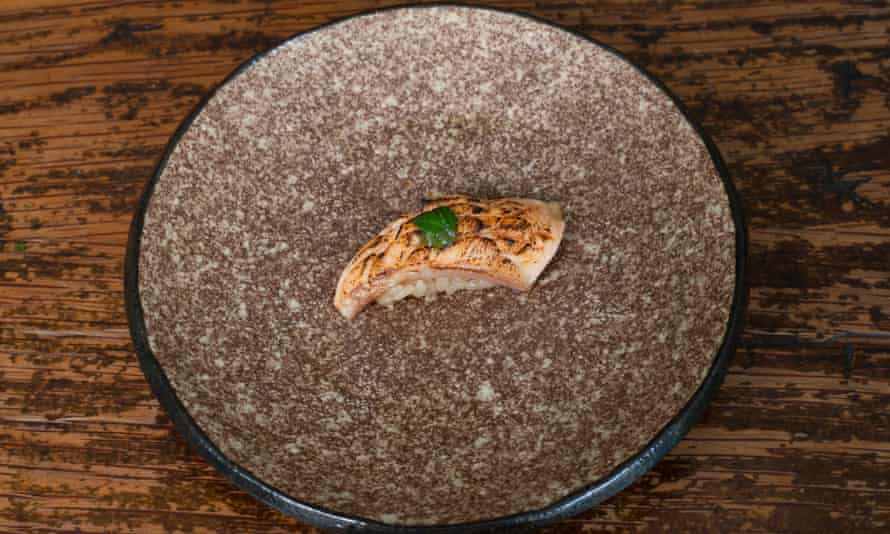 Just as Restrepo welcomes us, a bloke sticks his head through the front door and barks a friendly greeting at Suwannee. Restrepo shrugs. “It’s Brixton,” he says, simply. The occasional blue light will flash by. There will be raucous laughter from the street life of the pavement outside. Meanwhile, inside, we are being taken by the hand. It begins with pale pink slices of tuna. Like most of the fish it has been aged to give a denser texture and to deepen the flavour. The tuna has been seared. There is a puddle of a brisk ponzu dressing and a shower of parmesan for boosted umami.

Next, he tells us, there must be a fried course, for he is following a formal order. It’s a golden croquette of white and brown crab meat. In a nod to his Thai heritage, it sits on a thick green pond of a sweet-sour nam jim sauce. This trio of openers concludes with a miso-slicked piece of hamachi seared on the brasier until bubbling and brown, with a fan of tempura-ed enoki mushrooms, a shredded radish salad and a ginger dressing. 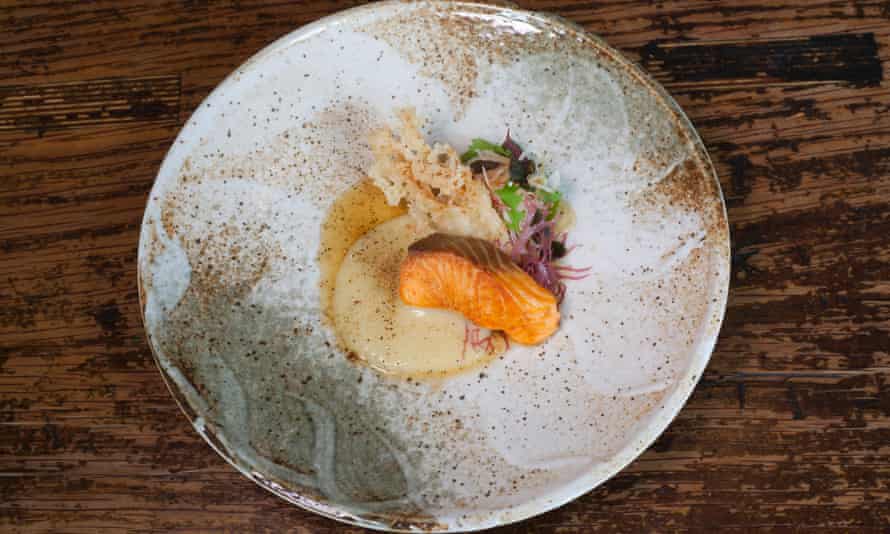 Now he presents the blonde-wood box containing a dozen types of fish. We watch the delicate jeweller’s hand movements, the rice scooped and shaped by warm fingers and palm, slicked with water between portions; the wasabi dabbed just so; the lozenge crowned with a curl of pristine fillet. He places each directly in front of us. The rice is just above room temperature and lightly vinegared. Some of the fish is brushed with soy. There is the hiss and pop of the blowtorch. Sometimes the brazier is used to sear the fish. At one point the coals are used directly. It is both dinner and theatre.

Each of these tiny, jewel-like courses comes with notes. The caviar comes from Exmoor; the farmed bluefin from Spain. Some fish comes from Brixham. Provenance matters. Between supplying this vital information, Restrepo tells us tales: of how he was refused access to restaurants in Tokyo on account of his tattoos, which signified gang membership; of the unsubtly racist divide between the Japanese students at the sushi academy and those from elsewhere. 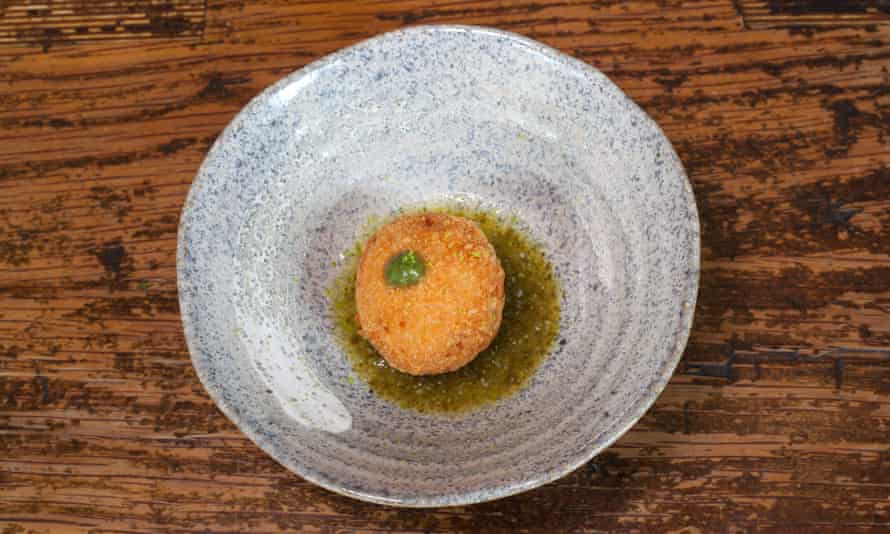 It would be repetitive to list all the nigiri, but there are highlights: a cross cut of crimson tuna, half fatty belly, half loin with a dollop of truffle mustard sauce; a seared trout belly with a Thai basil miso so aromatic you could dab it behind your ears; sweet pristine langoustine, the very essence of the sea, with nam jim. Scallops are scored 18 times so the surface opens out. “It’s called the Houdini cut because it disappears on the palate,” he says. Finally, he makes temaki rolls: seaweed cones of rice and the very best tuna tartare. “Here,” he says, handing it from his hand to mine. “Have a tuna spliff.”

The £108 price tag is hefty. Add on sake and it will be heftier still. But compared to similar offerings in London it can only be classed as good value. Plus, we should all beware cheap sushi. Restrepo has other residences around London, but later in the year he hopes Ichiban will become his permanent home. Suwannee will also serve a Thai tasting menu a few nights of the week. All the new dates are announced via his Instagram account, @kurisuomakase, and go very quickly indeed. Yes, I know. It’s all terrifyingly competitive. Just do what I did and set an alarm. It’s so very worth it.

I’m lucky enough to live in a part of London where I can order take-aways from Dishoom. Oh, the buttery joys of that house black dal. Now, after the cult success of their bacon naan kit, they have launched their first at home meal kit for delivery across much of the UK. The Home Feast box feeds two to three people, costs £60 and includes that dal, as well as lamb sheekh kababs, mattar paneer, murgh malai, rotis, lassi, and a gulkand mess to finish. Visit store.dishoom.com/home.

Pie maestros Calum Franklin and his second in command at the Holborn Dining Room Nokx Majozi are joining forces with Matt Brown, exec chef of the Hawksmoor Group for the annual dinner to raise funds for the charity Action Against Hunger. They’re staging a five-course feast at Hawksmoor Guildhall in London on 2 October. Tickets are £150. This is the ninth such event. Over the years the dinners, which feature both a live and silent auction, have raised more than £625,000.

Newcastle chef Kenny Atkinson has taken to Instagram to announce a new restaurant for the city. Solstice will be a sibling to Atkinson’s House of Tides which opened in 2014 and has held a Michelin star since 2016, the only restaurant in Newcastle to do so. Apart from the name, Atkinson has given no further information.

How to make your garden more sustainable | Gardening advice

Property fantasies are quickly ruined by reality | Life and style