JOSE MOURINHO has taken a swipe at Manchester United’s trophy drought, reminding them that he won their last THREE pieces of silverware.

The Red Devils are on their longest run without a trophy since they were last relegated in 1974 – nearly 50 years ago.

United boast the most amount of Premier League wins since the competition’s inception in 1992, lifting the title 13 times.

But their last domestic success came almost a decade ago in 2013 during Sir Alex Ferguson’s final season before retirement.

Since then, the likes of David Moyes, Louis van Gaal, Mourinho, Ole Gunnar Solskjaer and Ralf Rangnick have all failed to deliver England’s top prize.

However, Moyes won the Community Shield during his brief time at the Old Trafford helm. 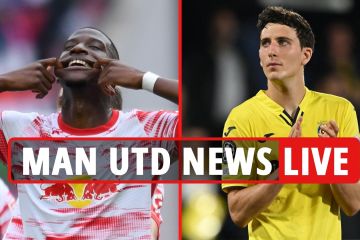 And Van Gaal ended his tenure with victory in the FA Cup.

But it was Mourinho who enjoyed the most success, winning the Community Shield, Carabao Cup and Europa League.

Indeed, United’s 2017 victory on the continent remains the last trophy they have won.

And Mourinho, who was sacked by the Red Devils in December 2018, has aimed a cheeky dig at his former side after leading latest club Roma to the Europa Conference League final.

The Special One, who claims his biggest achievement in football was leading United to a second-place league finish in the 2017/18 campaign, said: “We won together three titles at Man United.

“Unfortunately the last three titles of Man United. I say unfortunately because I like the club very, very much and I wish the club the best.

“We won three titles together so everything went well, in the second season was a little bit different.”

Mourinho also had his say on Todd Boehly’s impending takeover at former side Chelsea, adding: “It’s a difficult moment and you can even feel it at the football level because they have lost that level of excellence and stability.

“But this is at the moment, you know. If you ask me do I have someone I would like to take over my Chelsea? Then yes I have, but I close my mouth.

“And my house will always be 200 metres from the stadium and I want to keep listening to the sound of happiness and success and I’m pretty sure it’s going to be like that.”