A WOMAN has revealed some of the horrifying bodily substances she has found herself covered in during her first six years as a doctor.

The GP, called Helena, shared in a TikTok video the gross reality behind aspects of her NHS job.

In the post, the London-based doctor explained how had come into contact with other people’s poo, snot, urine, vomit, pus, snot, vaginal bleeding and amniotic fluid.

Captioning the clip, Helena wrote: “Things I’ve been covered in during my six years as a doctor.”

At the end of the video she joked about also being left with a “crippling” £50,000 student loan debt.

Her post, which has been viewed more than 10,700 times, was popular with social media users who left over 200 ‘likes’.

One person wrote: “I think they should teach reaction skills in uni, to avoid unexpected events like these.”

Helena replied: “Haha no reaction skills training can prepare me for a child deciding to empty their stomach contents in my lap.”

Another asked: “Are you seeing patients face to face yet?”

Helena responded: “We are yes! The receptionists are using their judgement/ allowing people to choose whether they want telephone or face to face.

“Much easier to see face to face really!”

In another post, she revealed the questions she often gets asked as a GP.

One read: “How many genitals do you see in a week?”

She replied: “Hundreds (and we don’t care if you have shaved).” 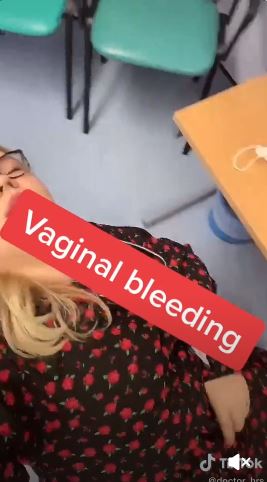 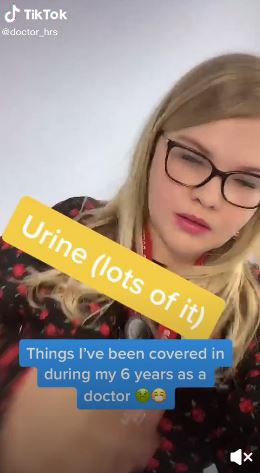 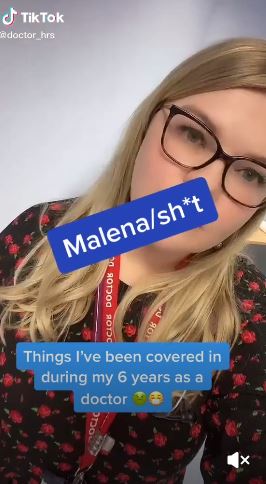 TikTok users left over 200 ‘likes’ on her funny post

In other real life news, we told you about a woman who got skin cancer twice in one year.

We also revealed how a 41-year-old often gets mistaken for being in her 20s.

And a single mum has saved £870 since moving onto a boat.