SPILLING out of the nightclub with the 2am crowds, Melanie Road bid a cheerful farewell to her boyfriend and pals then started walking home.

The 17-year-old schoolgirl had made the journey countless times before – yet this time, it would end tragically after she was murdered by a monster. 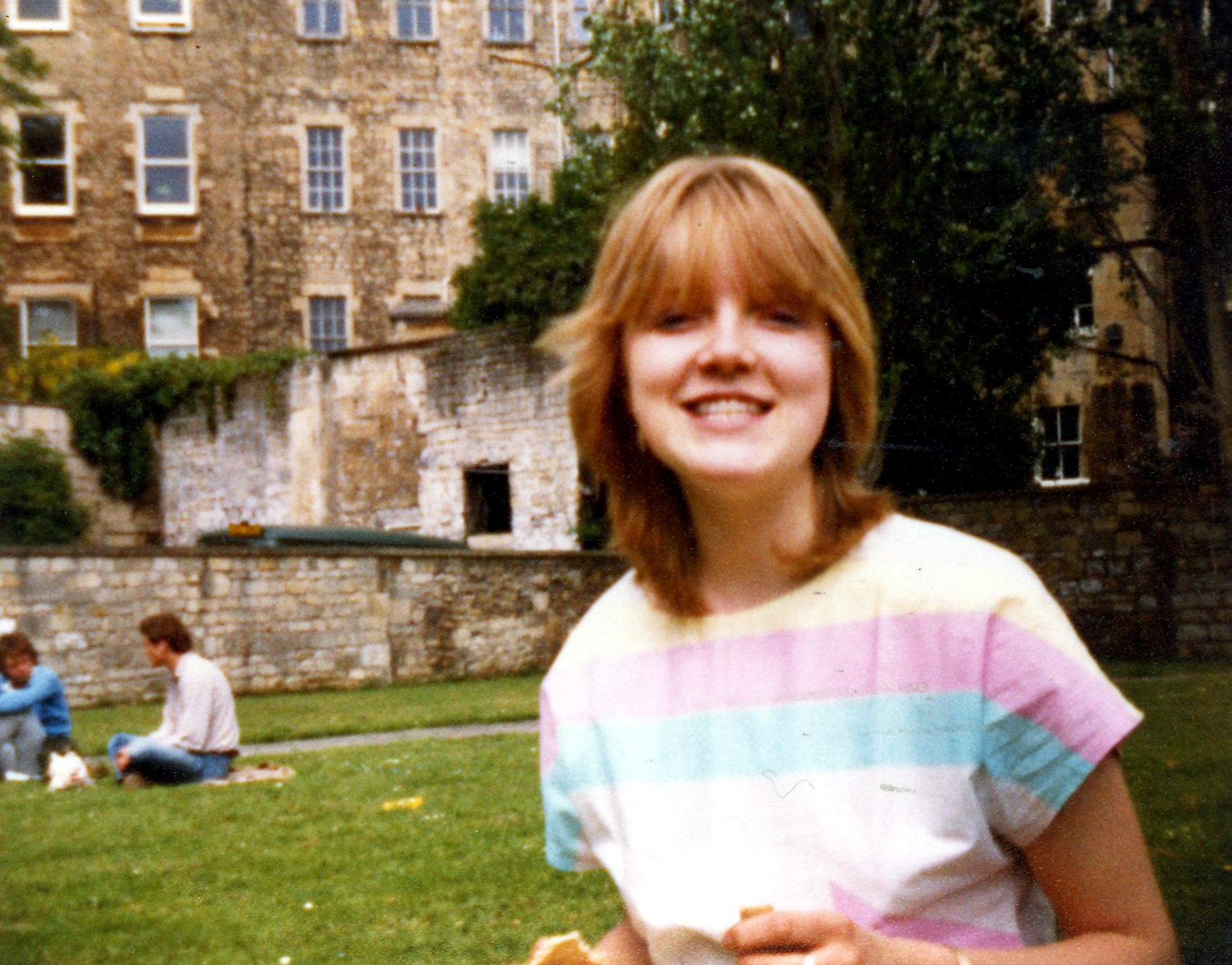 Straight-A student Melanie Road was just 17 when she was raped and knifed 26 times on her way home from a nightclubCredit: SWNS:South West News Service

Melanie, from Bath, Somerset, was just “moments” from home when she was raped and stabbed 26 times – including eight times in her breasts.

After the brutal attack in June 1984, she was left to die in a pool of blood. Her body was found hours later by a milkman and his 11-year-old son.

The grisly murder sparked one of Britain’s biggest ever manhunts – with killer Christopher Hampton only brought to justice 32 years later, in 2016.

Now, the shocking case is the subject of an ITV News true crime podcast, which explores the schoolgirl’s murder and the hunt for her killer. 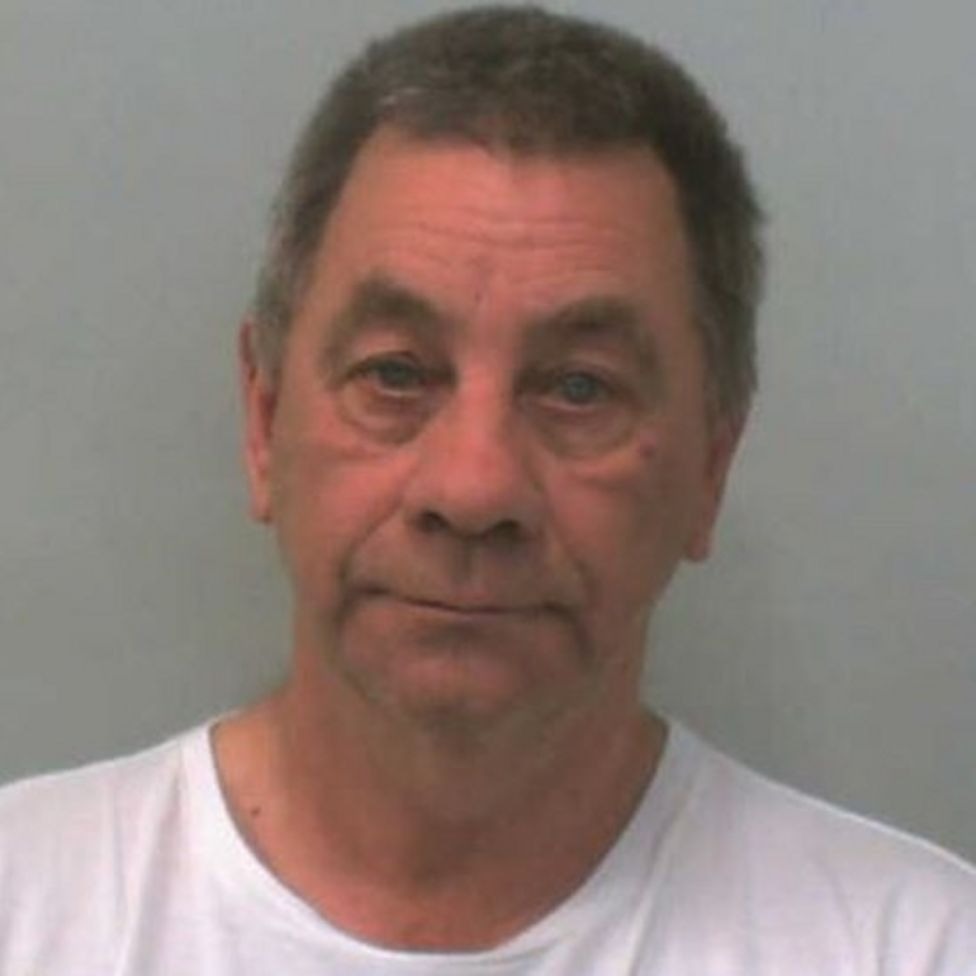 Monster Christopher Hampton was brought to justice in 2016 – 32 years after the grisly killingCredit: Avon and Somerset Police 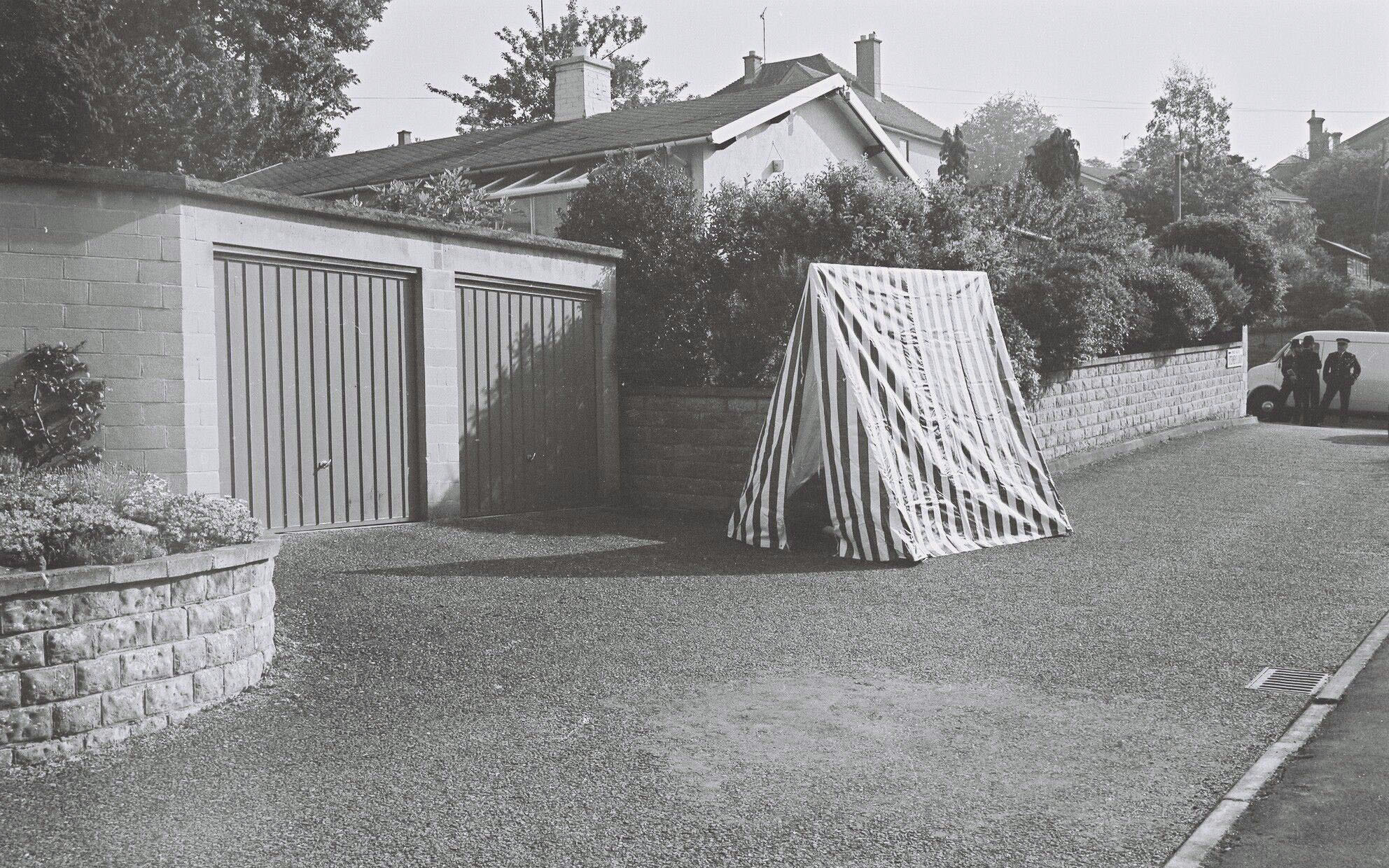 A police forensic tent is erected on the street near to where Melanie was found by a milkman and his young sonCredit: PA:Press Association

The podcast, Catching Melanie’s Killer, features rare interviews with her loved ones and detectives – including cold case investigator Julie Mackay.

Julie, who led the team who finally cracked the murder case, says: “When I started on it, I never thought it would finish in the way it did.

“I never thought it would have so many twists and turns.”

As for Melanie’s elderly mum Jean, she recalls a popular and intelligent teenager who “made herself welcome wherever she went.”

“With everything that she did, she did well,” she says of her daughter. 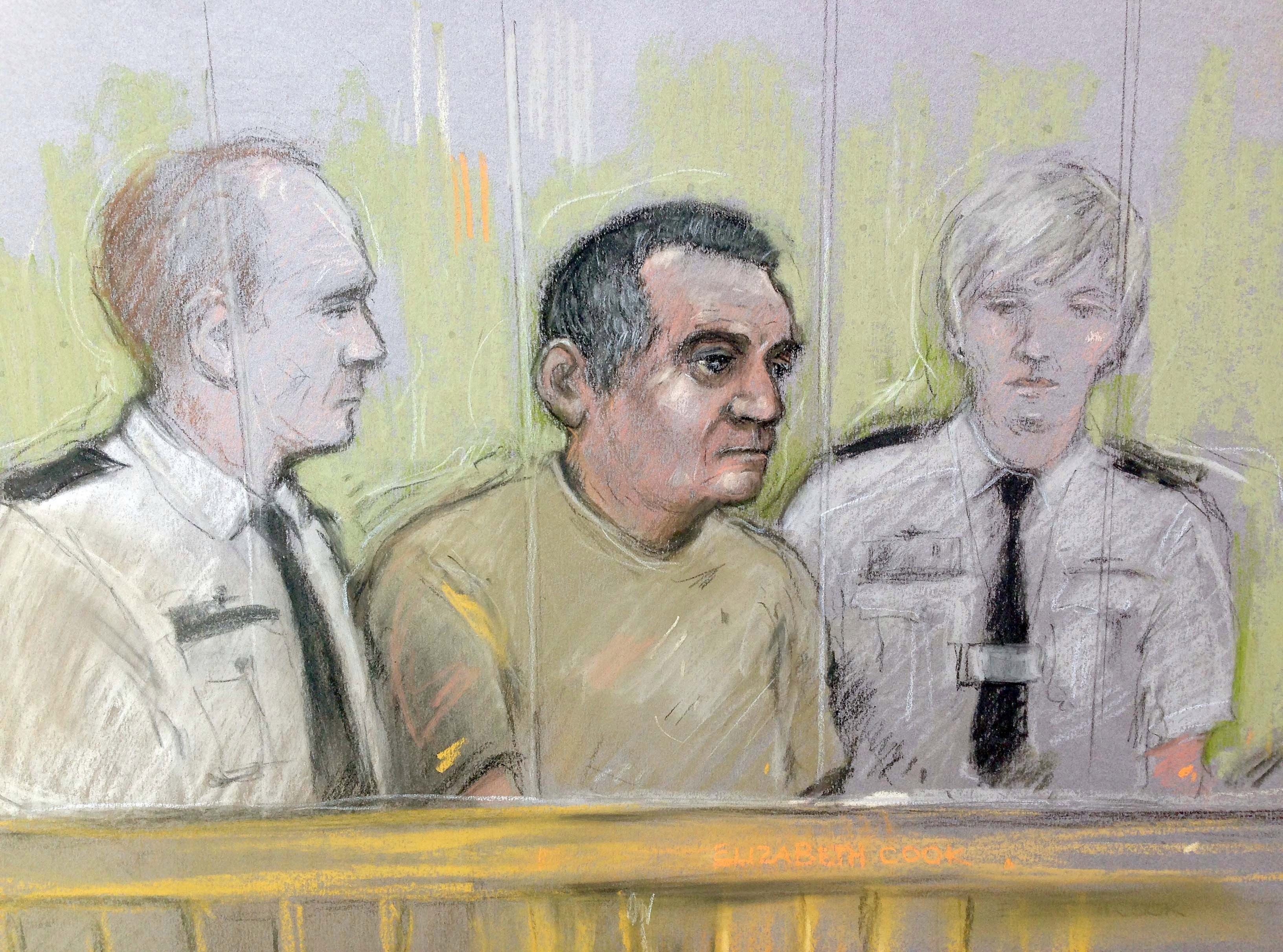 Growing up, “bubbly” Melanie excelled at school. She was a straight-A student, deputy head girl and dreamed of becoming an archaeologist.

She also adored music and never argued with anyone. “I always look at her as a child with an old head on her shoulders,” says mum Jean.

But the youngster’s bright future was shattered after she went on a night out in Bath the Friday before her A-Level exams were due to start.

That night, Melanie visited Beau Nash nightclub with her boyfriend and friends – with the group leaving at closing time in good spirits.

They then started to walk home together.

But Gary Mason, a police investigator who worked on the case, explains that, at one point during the journey, Melanie said she’d carry on alone. 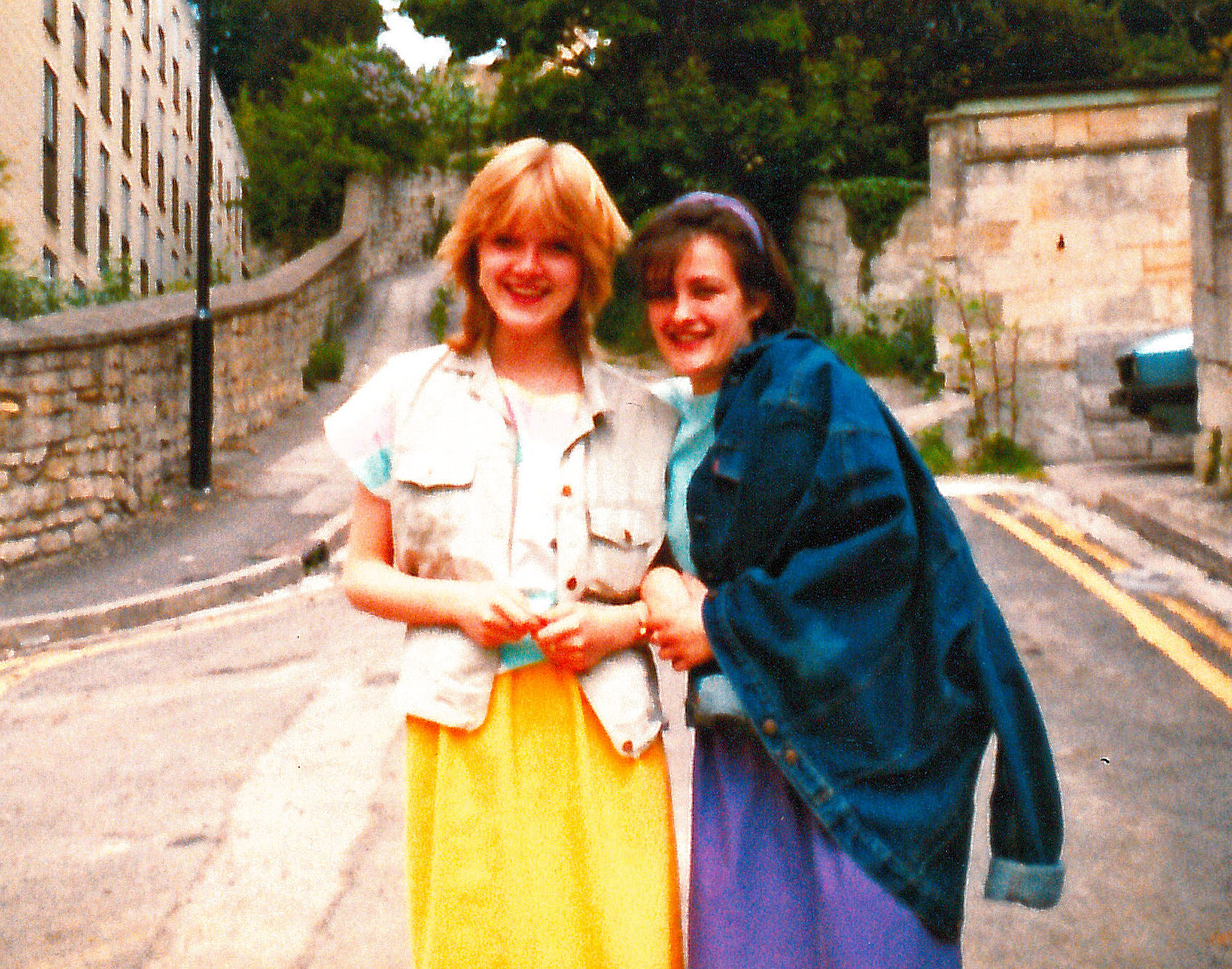 ‘Bubbly’ Melanie, pictured, left, with a friend in 1983, had dreamed of becoming an archaeologistCredit: PA:Press Association 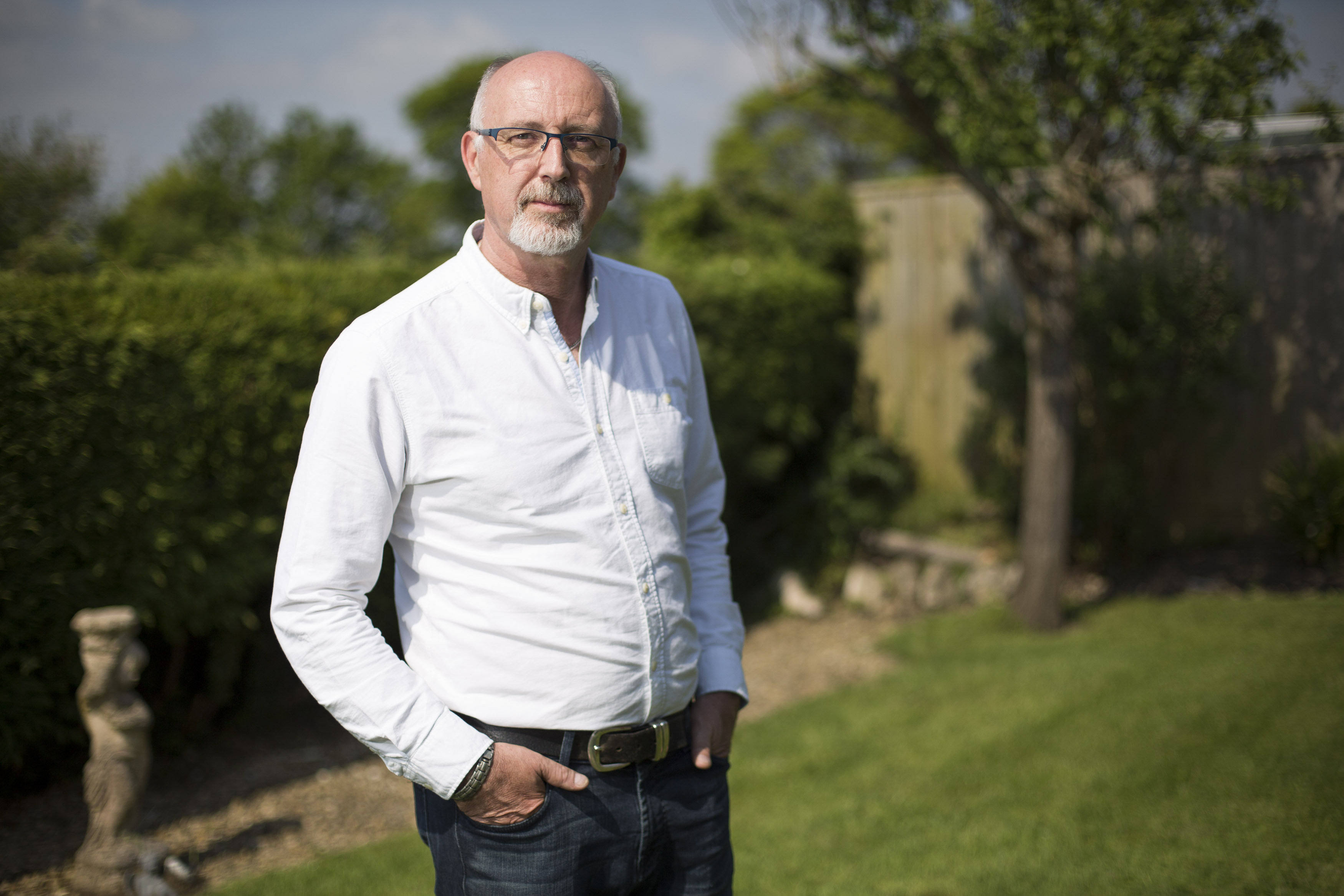 Former police investigator Gary Mason, pictured, who worked on the case, says Melanie had done the walk home ‘so many times’ beforeCredit: SWNS.COM

“Her boyfriend offered to get a taxi for her,” Gary says in the new podcast.

“But she declined. She’d done that journey so many times that she was quite happy – she only had another half an hour to walk.”

Like many young women in the area at the time, Melanie felt safe.

At first, she walked through her hometown’s bustling city centre – yet before long, the roads were becoming quieter, darker and more suburban.

Back then, there were no CCTV cameras, no smartphones. It means that, to this day, the exact route Melanie took before her murder is unknown.

June 8, 1984 – Melanie Road, 17, goes on a night out with her boyfriend and friends to Beau Nash nightclub in Bath, Somerset.

June 9, 1984 – Melanie leaves the club when it closes at 2am. She is then brutally stabbed to death while walking home.

June 9, 1984 – Melanie’s body is found by a milkman and his 11-year-old son at around 5.30am in Bath’s Lansdown suburb. The scene is just “moments” away from the victim’s family home.

1984 to 1989 – The murder sparks one of Britain’s biggest ever manhunts. Police launch an investigation, Operation Rhodium.

1995 – The DNA profile of the suspected killer is put on the national database for the first time, but there is no match.

2009 – It’s the 25th anniversary of Melanie’s death. A Crimewatch special is shown. Seventy names are handed to police – none of which are Christopher Hampton.

April 2014 – Detectives investigating the cold case reveal they have a full DNA profile of her suspected killer.

November 2014 – Hampton’s daughter gets a caution for criminal damage. Her DNA is added to the national database.

May 2015 – Results come back with a familial match to Hampton’s daughter.

May 2016 – Hampton, who had earlier entered a not guilty plea, shocks the courtroom by pleading guilty to murder. He is jailed for life, with a minimum of 22 years behind bars. The judge tells Hampton the attack had been “for your own sexual gratification”.

What is known, however, is that her death was sickeningly violent.

A judge would later describe it as “lengthy and brutal” – with Melanie stabbed once, then chased round the corner and knifed dozens more times.

She was also subjected to a “vicious” sexual attack, a court heard.

But later that morning, the body of Melanie, who was lying on her back, was found by a little boy helping his milkman father on his round.

And, speaking to ITV News correspondent Robert Murphy from the scene, Julie describes how Melanie was “200 metres” from her family home.

“Literally just around the corner from here there’s a little cut-through and she’d have been home,” says the cold case detective. 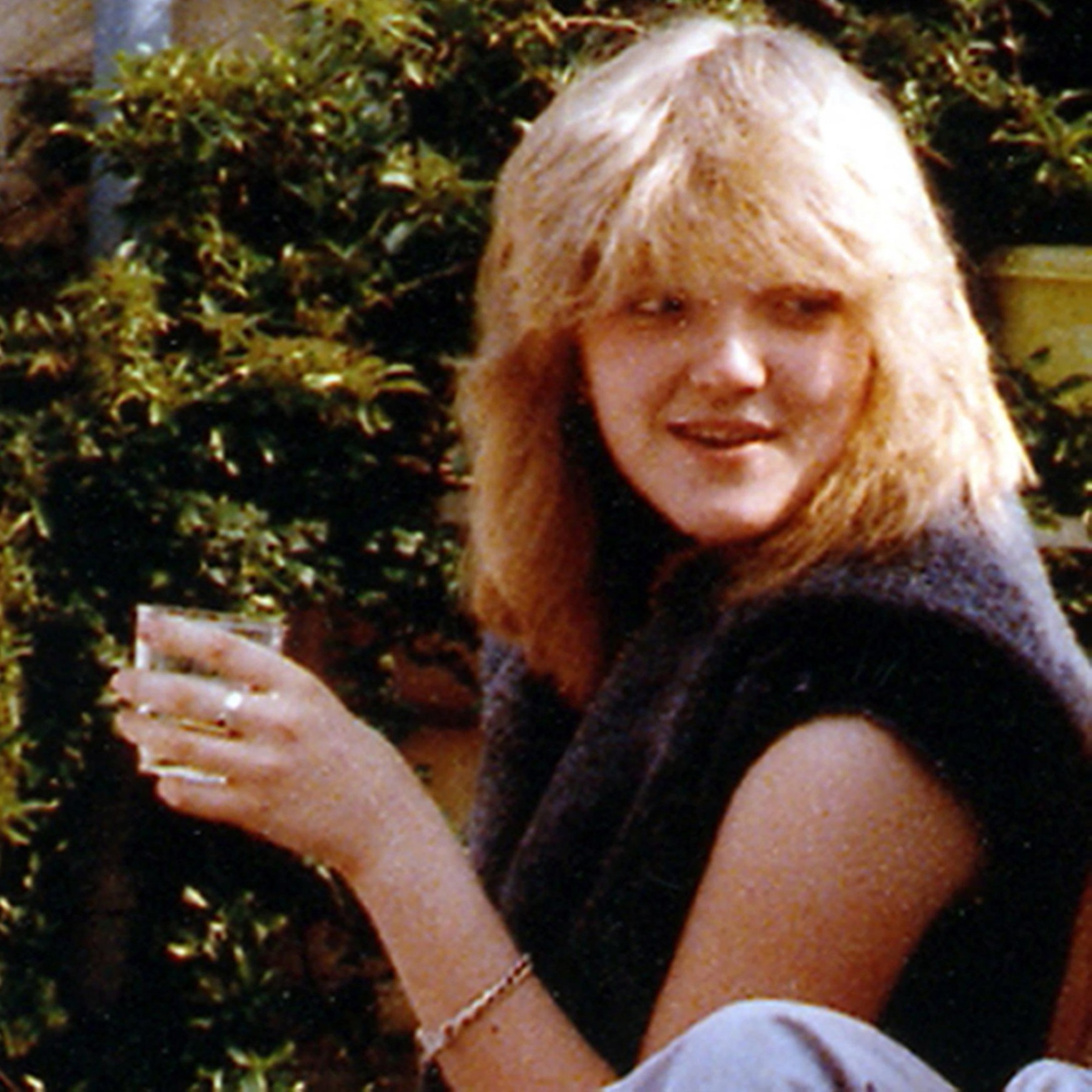 Melanie was stabbed once, then chased round the corner and knifed dozens more times, a court heardCredit: PA:Press Association 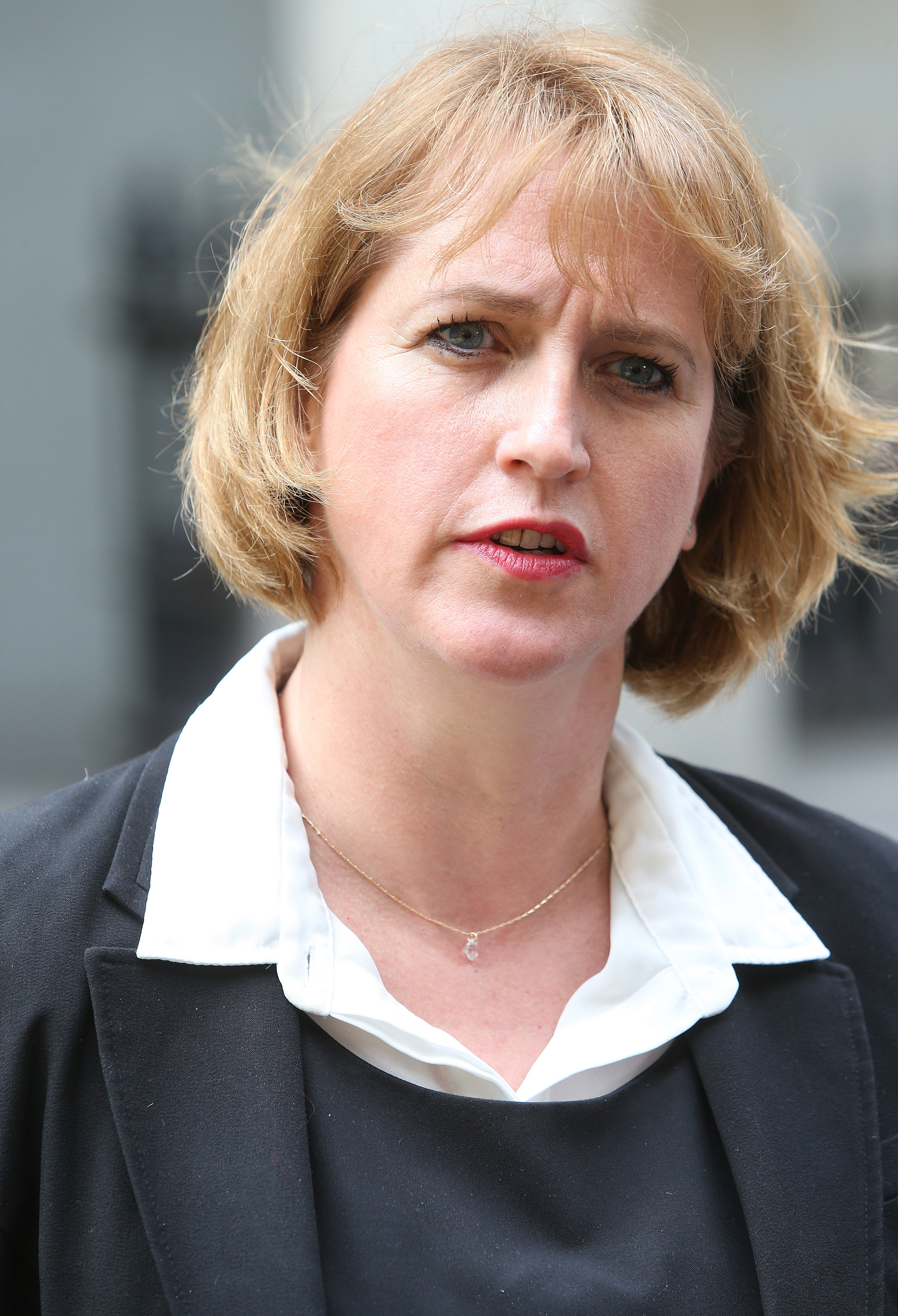 On the wall above Melanie’s body was her keyring, with her name on.

This would prove a vital clue as to the schoolgirl’s identity.

While cops descended on the scene, a police car took to the streets with a loudspeaker, bellowing out, “Melanie,” in a bid to track down her family.

Soon, they were passing Jean’s home, in Bath’s affluent suburbs.

Jean, then 49 and a mum of three, had already been worrying about her youngest daughter after realising her bed hadn’t been slept in.

So when she and her husband heard the metallic-sounding voice calling out their girl’s name from the street, Jean immediately raced outside.

“He stopped and said ‘what did you want?’.

“I said, ‘we have a daughter Melanie and she hasn’t come home’.” 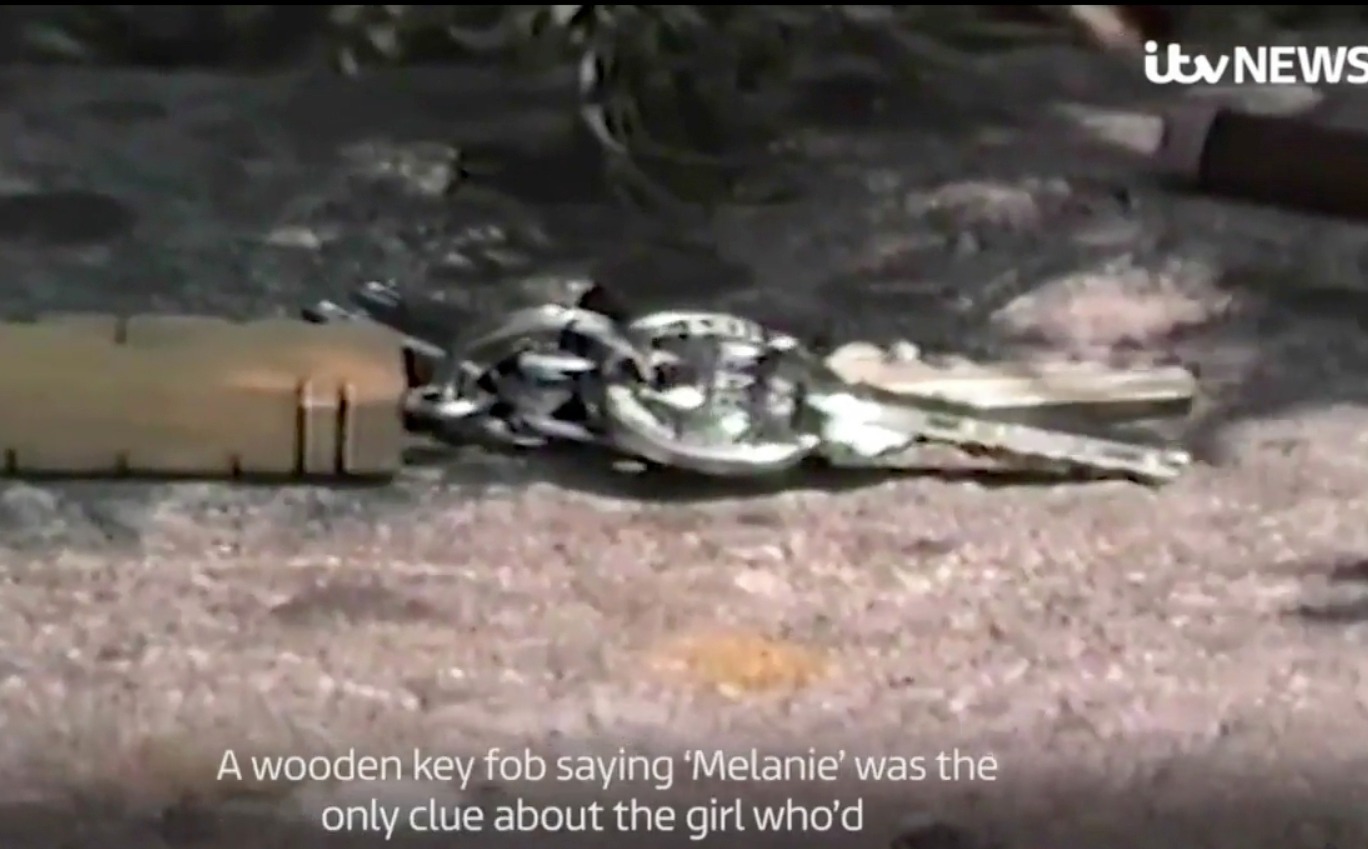 A keyring featuring Melanie’s name was found on the wall above her bodyCredit: ITV News

Not long after, Jean says, “all hell let loose”.

Faced with the knowledge that her daughter was never coming back home, she “forgot” to eat, lost weight and kept waking up from nightmares.

She’d wander aimlessly through the city’s streets, hoping to see a glimpse of Melanie, and sat for “hours” traumatised by the horror of her girl’s death.

“Where Melanie’s blood was spilled, I prayed that it would not rain to wash it away, and when it did I cursed the rain for finally taking it away,” Jean said in a powerful victim impact statement in 2016.

Where Melanie’s blood was spilled, I prayed that it would not rain to wash it away

“I felt even the weather was against Melanie and the family.”

Meanwhile, detectives were desperately trying to track down Melanie’s killer, who had left a trail of blood – of a rare type – as he fled the scene.

Yet despite their efforts, Hampton remained at large for more than three decades – with 94 men, not including him, arrested but none charged.

It seemed the killer had vanished into thin air. 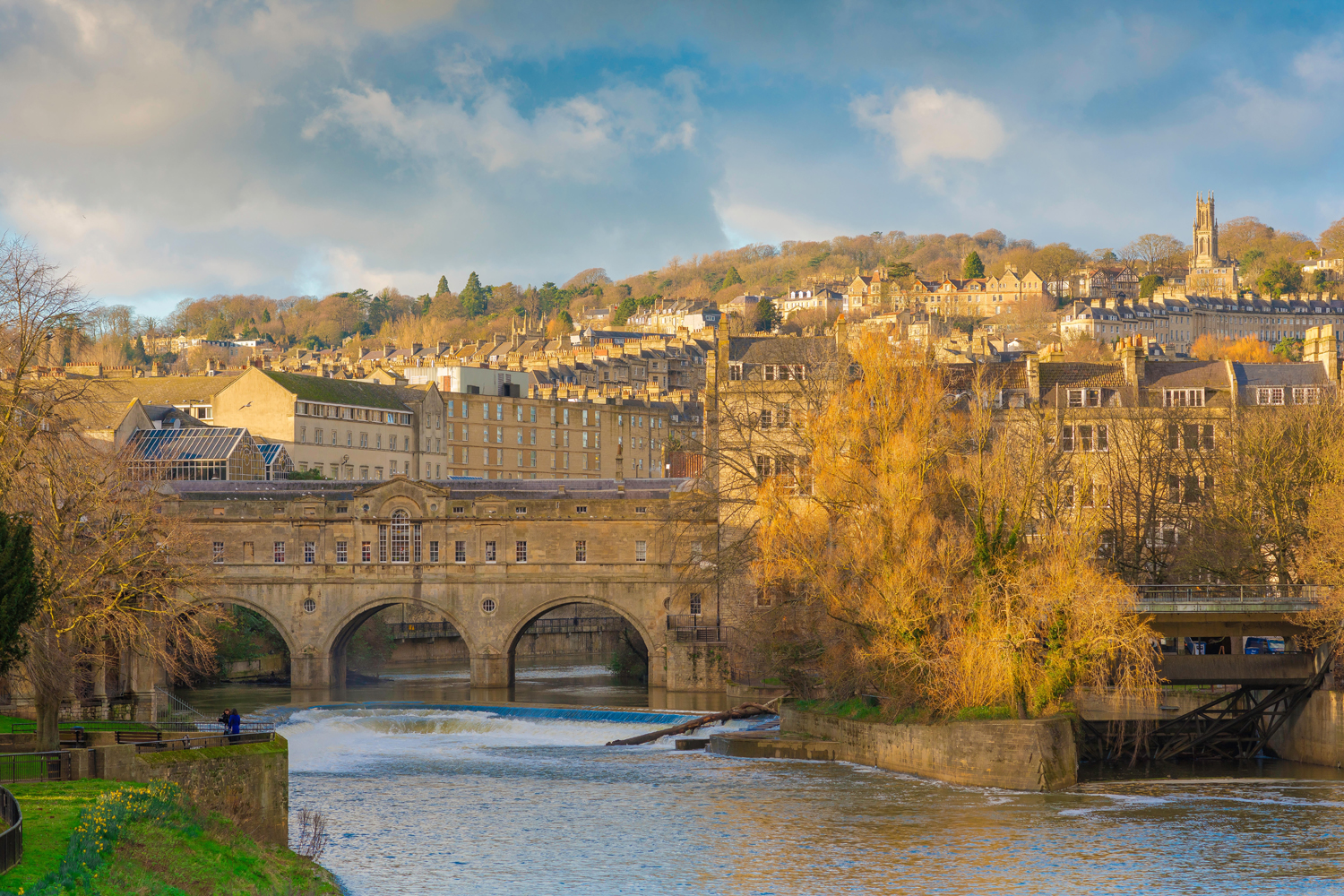 The murder occurred in the historic city of Bath. Melanie’s killer remained at large for more than three decades before finally being arrestedCredit: Alamy

But in fact, painter and decorator Hampton, then in his 30s, had resumed his normal life, even marrying his second wife and having a child.

“You married and had a child and lived your family life for all those years knowing the extreme misery you must have inflicted on your victim’s family but you were too callous and cowardly to put an end to their heartache,” Mr Justice Popplewell told Hampton at his sentencing.

In the end, it was Hampton’s daughter’s DNA that nailed him.

The 43-year-old daughter had given a routine DNA swab after being arrested for breaking her boyfriend’s necklace during a row.

The swab showed a “familial link” to blood and semen left on Melanie’s body. And when detectives swabbed Hampton, they got a match. 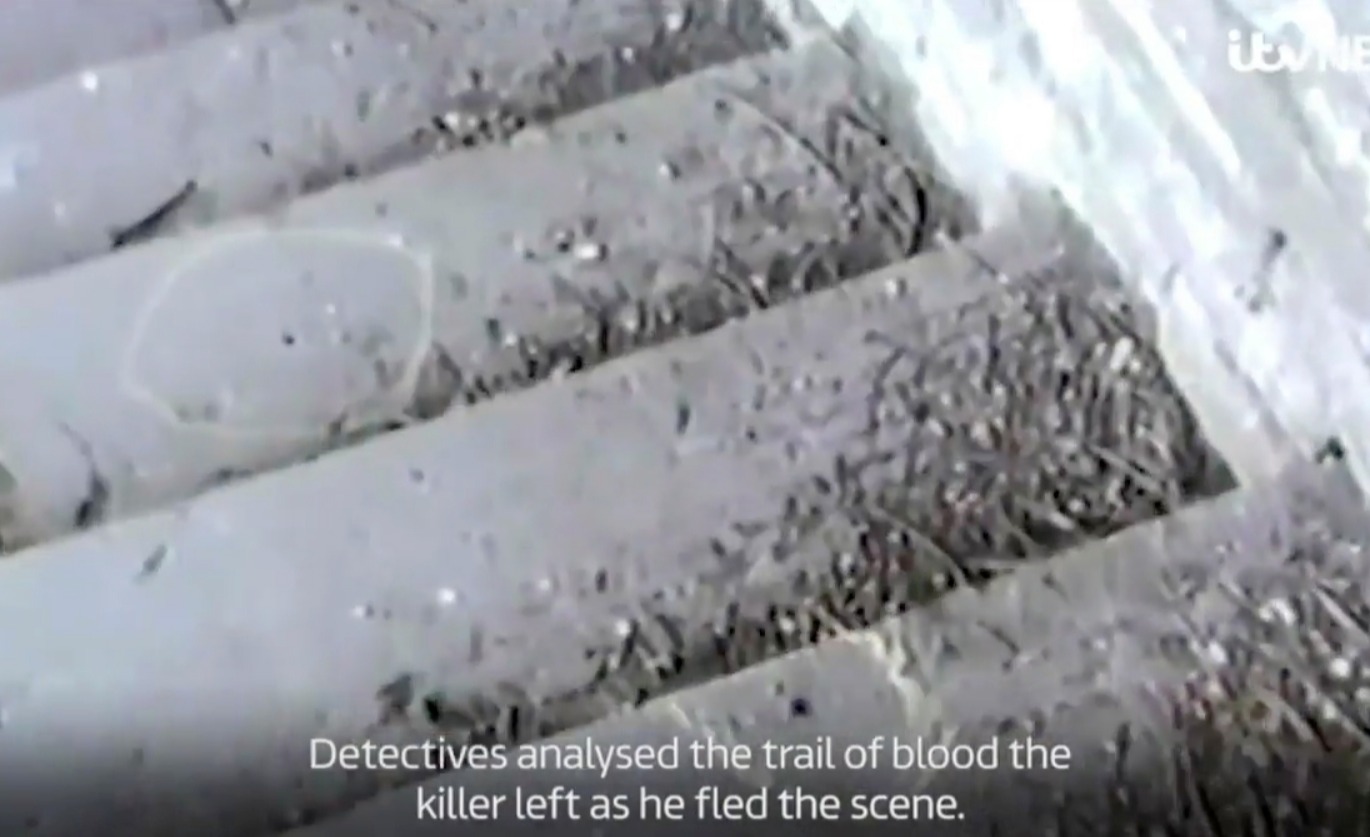 The schoolgirl’s murderer left a trail of blood – of a rare type – as he fled the scene in 1984Credit: ITV News

In May 2016, Hampton, then 64, admitted murdering Melanie at Bristol Crown Court. He was jailed for life, with a minimum term of 22 years.

Mr Justice Popplewell told the beast the attack had been “for your own sexual gratification”, adding: “You will very likely die in prison.”

“She was repeatedly stabbed – 26 times in all – with a sharp-edged knife, causing four-inch wounds,” the judge said at Hampton’s sentencing.

“Eight of the wounds were to her breasts.”

Speaking at the time, Jean, then 81, said of her daughter’s killer: “He is not a man, he’s a monster. He should be shut up in a dungeon and left to rot.”

Meanwhile, sister Karen said: “For 32 years I’ve felt as if I’m living in a horror film – one where the perpetrator has not been caught.

“Not knowing who is responsible for Melanie’s death has been torture.” 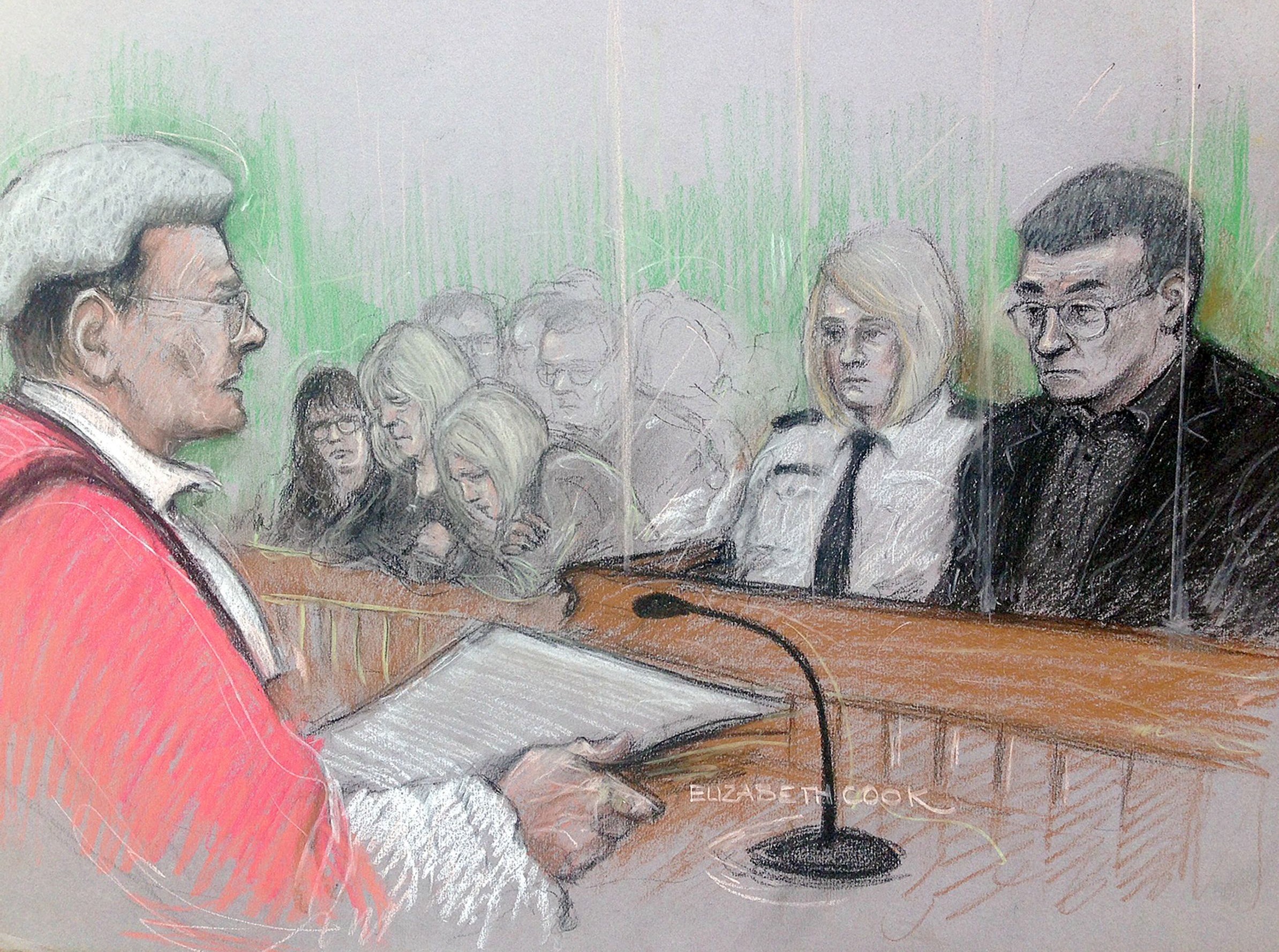 A court artist sketch of Hampton in the dock at Bristol Crown Court. He was caged for life after pleading guilty to murderCredit: PA:Press Association

And in his own victim impact statement, Melanie’s brother Adrian described how he’d spent decades worrying about every man that he saw.

He said he’d constantly think: “Did you kill our little sister Melanie?.”

But directly addressing Hampton, Adrian said: “You killed Melanie, you raped her, you mutilated her, and you chose to abandon her, you abandoned her when she was dying, our little sister Melanie.”

The brave brother added: “Thirty-two years, I have listened to dozens of police officers assure me ‘Adrian we will find him’. They were right, they did find you and when they told me, I cried, uncontrollably, I cried.

“My six-year-old daughter asked me ‘Daddy, why are you crying?’.

“I had to tell her, ‘the man who killed Aunty Melanie, my little sister, a long time ago, has now been caught, so we are all safe’.”

In response, Adrian’s girl said: “That is so sad, he needs to be punished”.

And with Hampton now four years into his life sentence – and expected to die before he can return to the streets – justice has finally been served.

Lisa Montgomery, the only female inmate on federal death row has been executed for murder in Indiana