ONE expecting mom had the internet asking the same question after she showed off her eye-catching baby bump.

Renae W is a mother of five with more than 286,000 followers on TikTok, creating content on her everyday life as a mother. 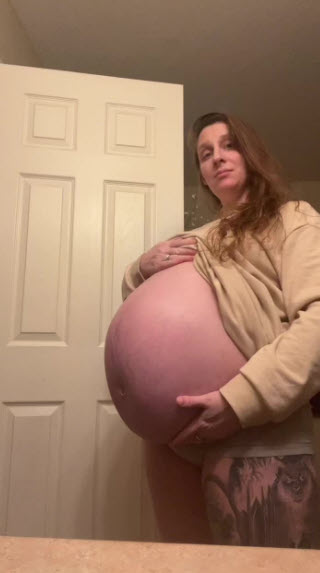 People were shocked to learn she was pregnant with only one childCredit: TikTok/mommy1987003

In the video, Renae revealed her larger baby bump, gaining over 50million views.

In the video, Renae sang along to the audio: “Oh hey, thanks for checking in.

At the time, she was a day short of 37 weeks pregnant – but looked much further along than that.

Her bump was so big, people couldn’t help but chime in with well-meaning jokes about Renae’s baby boy and extra-large bump.

“Bro gonna come out with a college degree,” one person quipped, with another adding: “You got a whole NFL player in there.”

Another shocked viewer wrote: “This kid has already paid off their student loans!”

Others were surprised to find out Renae was only carrying one child, such as one user who wrote: “That’s gotta be a litter ain’t no way that’s one kid.”

Another user added: “I swear you have like four twins in there.”

Meanwhile, other viewers were genuinely concerned about Renae’s comfort.

“Ohhhhh mama you must be in agony,” one person commented

“Girl genuinely are you just in pain constantly?” another asked.

In a separate video, Renae responded to concerns that her big bump was a “warning sign” that there could be something wrong with her pregnancy.

However, she shared that she and her baby were healthy, she was seeing a high-risk doctor, and there were no signs of excess fluid or gestational diabetes.

She added that she only gained 35 pounds during the pregnancy and she had a similar bump with her last baby boy who came out weighing over nine pounds.

Renae detailed her pregnancy in subsequent videos up until she gave birth to her boy by c-section on February 18.

Her newborn weighed in at 9 pounds, 8 ounces, and measured 22-and-a-half inches tall.

She also said her baby’s “big head” measured 15 inches around.