I LOVE a roast – but not the effect it has on my electricity bill.

Firing up my oven costs about 70p an hour so I’m trying to use it as little as possible. 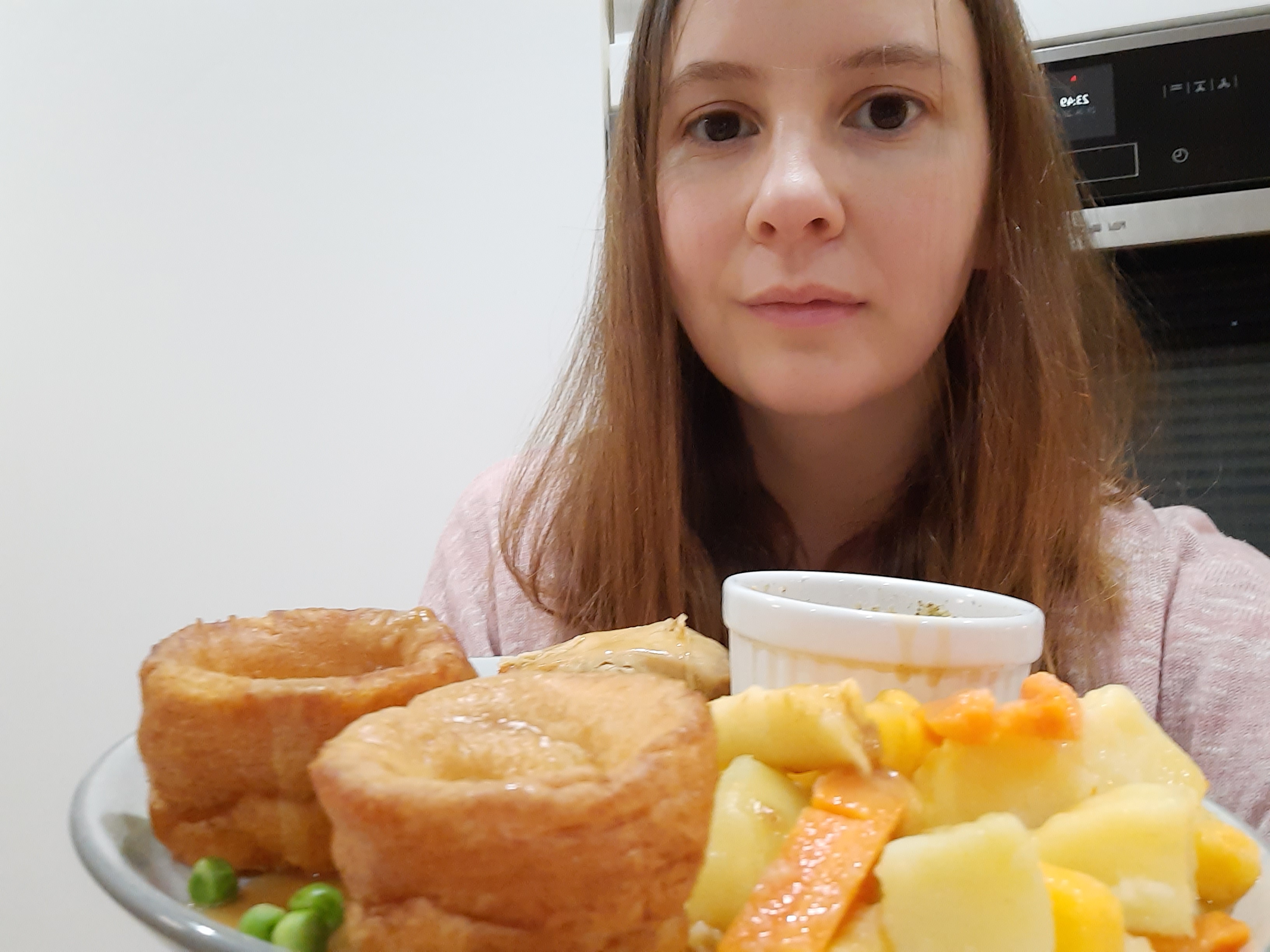 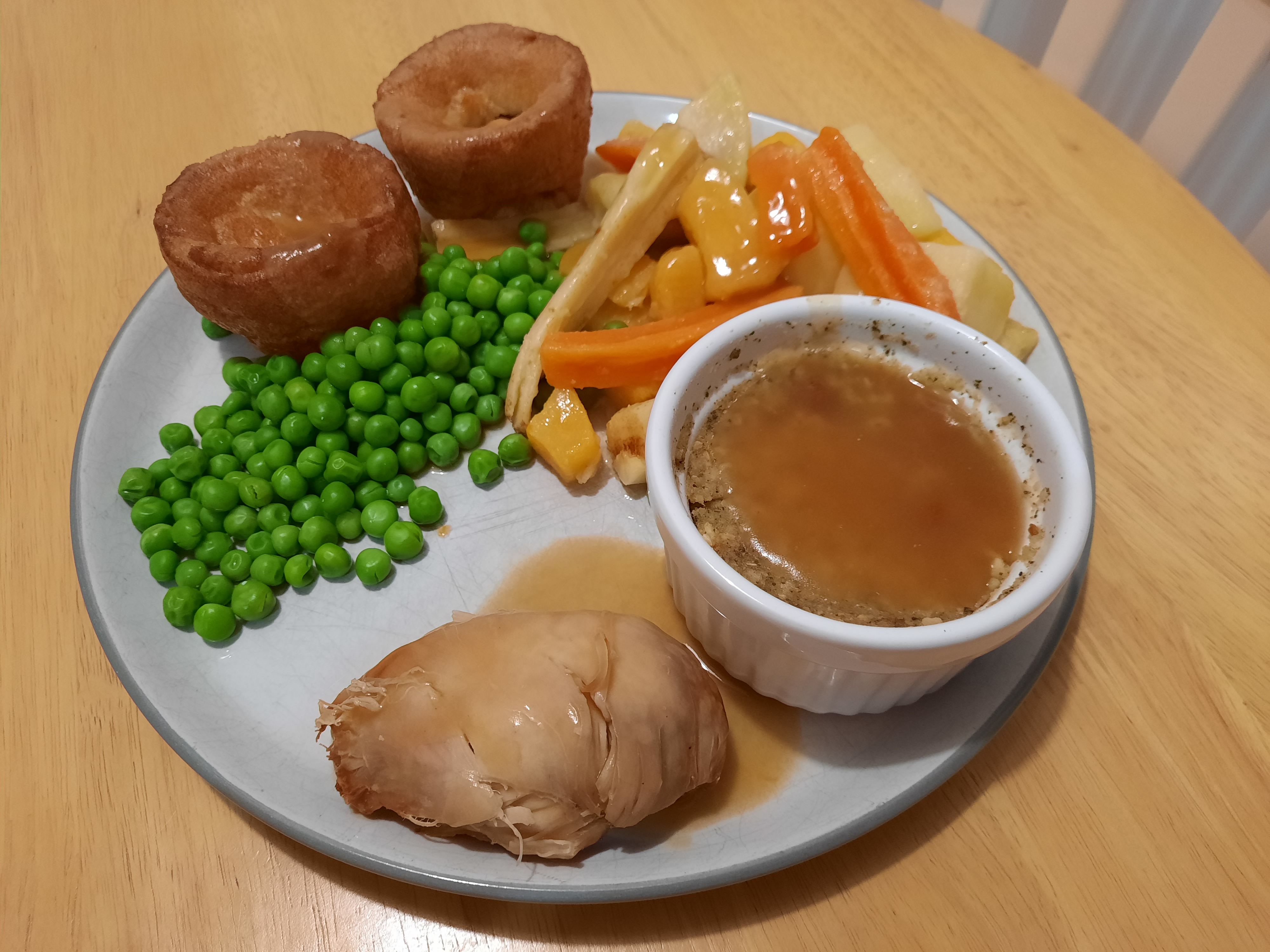 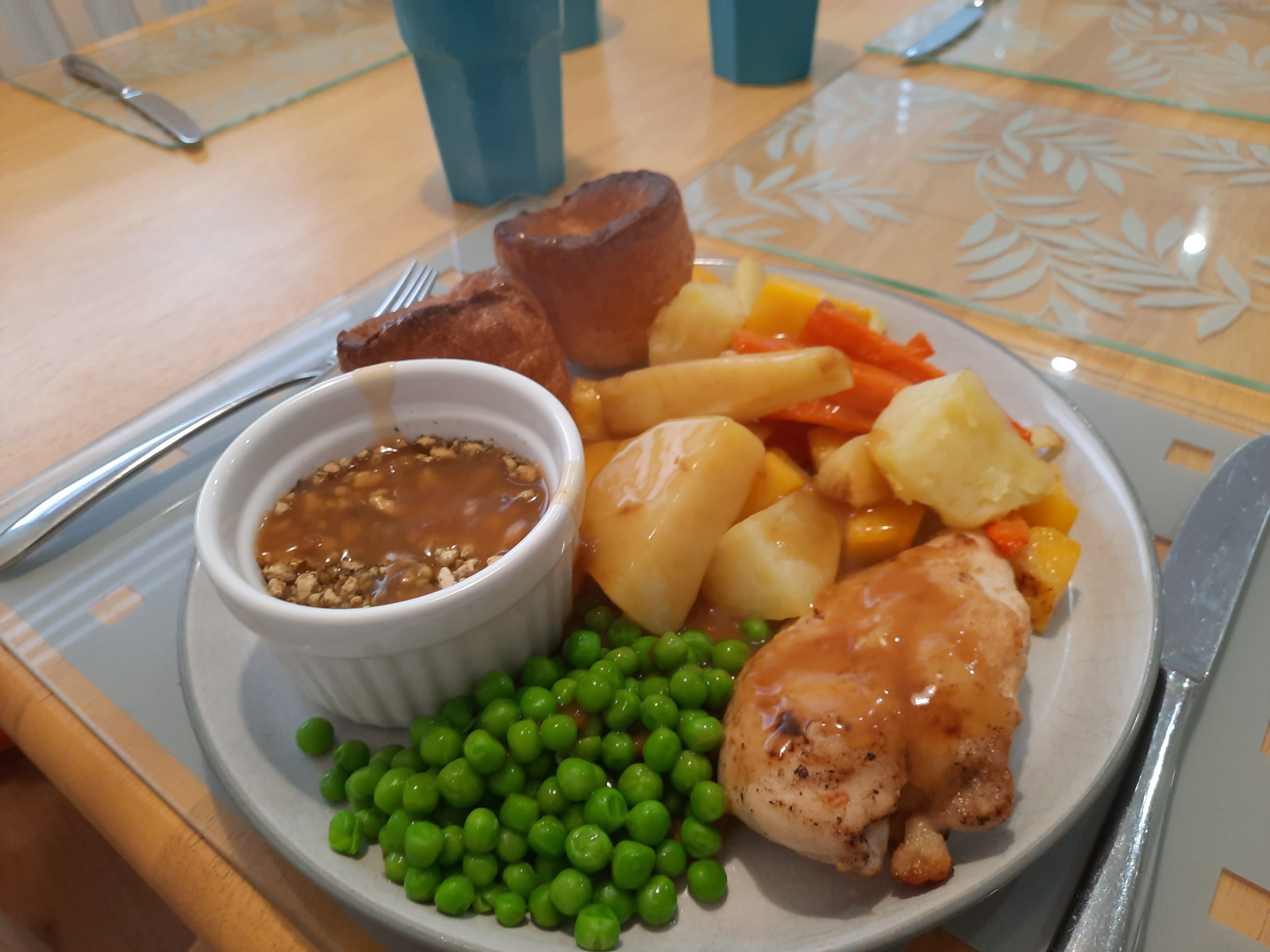 The oven meal came out with crispy potatoes

That got me thinking if there are cheaper ways to do it, so I decided it was time for a test.

On Saturday night I made a normal roast using the oven.

After being greased with oil, my potatoes, parsnip and carrots (part boiled for 10 minutes) and chicken went in at 200C for half an hour.

I chucked some pre-made Yorkshire puddings on the same tray for five minutes at the end. 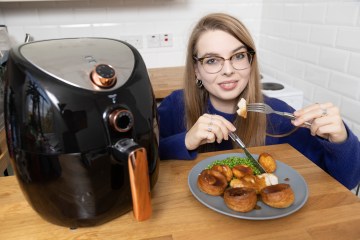 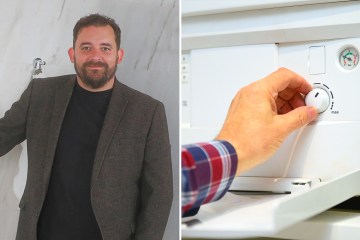 For stuffing, I put some dry mix in a ramekin with hot water, and then cooked it with the veggies.

Peas were done on the hob for five minutes.

I’m hardly a chef with my shop-bought Yorkshire puddings and mix-made stuffing, but I get no complaints from my family who devour it all without looking up.

Would they notice if I tried to save a few bob using the microwave, which is cheaper, due to the fact microwaves heat up the food, rather than the whole oven cavity?

I did a bit of Googling first for some microwave recipes.

It seems lots of people have tried this before – maybe it will become a thing as the cost of living spirals.

The first step was part boiling my potatoes, parsnips and carrots as usual for 10 minutes, as they would take forever to soften in the microwave.

I then doused them with olive oil, placed them in a Pyrex dish and covered them with clingfilm (the plastic wrap keeps the food moist apparently).

Then came the moment of trying to crisp them up in the microwave.

I microwaved the dish for nine minutes – stopping every three minutes to check how they were doing.

I feared it would be easy to overcook them so kept a watchful eye.

You have to be really careful when checking because loads of steam builds up under the clingfilm.

After nine minutes they were cooked – any more microwave zapping and they’d have crumbled up. So I put them to one side.

How to cook the chicken in the microwave

Then the moment came to cook the raw chicken breast, which for me was the biggest concern of this whole experiment.

I knew the meat could go dry, but I was also really worried about it not being cooked enough.

The meat went in a Pyrex dish with a couple of tablespoons of water and was covered with plastic wrap.

It took 12 minutes to go white and at that point, the meat looked like it couldn’t take any more cooking, so I took it out to rest. 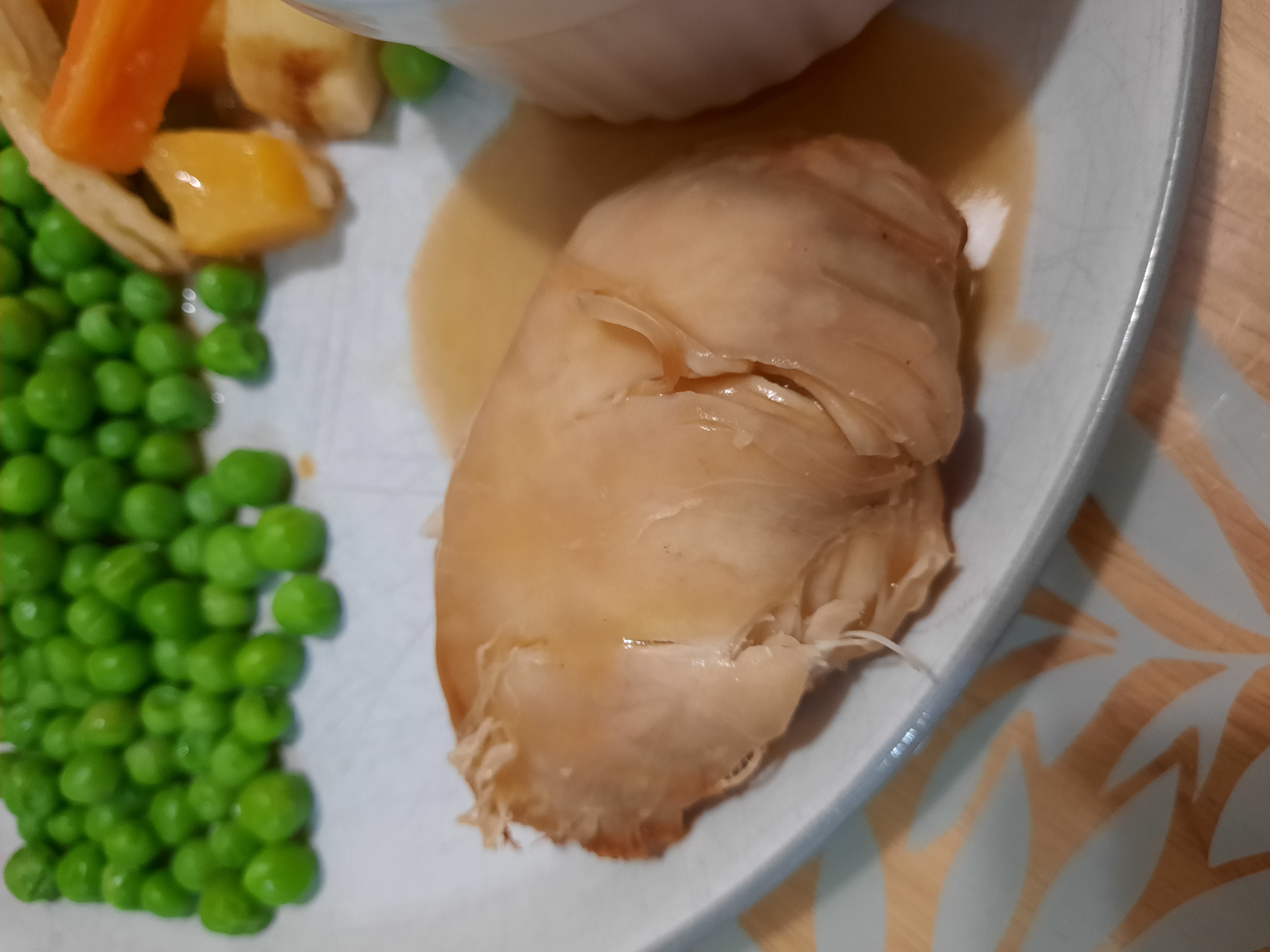 Experts say the juices must run clear and not bloody when cooking meat, which is a good way to know if it’s safe.

Then came the stuffing. I filled a ramekin with some stuffing mix and a knob of butter, then poured in enough boiling water to cover the mixture and absorb it all.

I then left the mix to rest for 10 minutes before microwaving it for a minute and a half at 1,000 watts.

The Yorkshire puddings I turned upside down on a microwavable plate, brushed with olive oil and microwaved for a minute and a half.

The frozen peas were boiled on the hob for three minutes.

They could have been cooked in the microwave for five minutes, but to bring everything together warm was becoming tricky.

With everything ready, I bought it all together on a plate for the grand presentation to my family.

The finished meal actually looked great but with one exception – the chicken, which had shrivelled into a brownish grey rubbery lump.

After a taste test, we all agreed that firstly, the potatoes and veg weren’t crisp.

You simply can’t get that oven-roast crackly taste in a microwave.

But they were perfectly pleasant to eat – you just need to adjust your expectations on the texture.

The chicken didn’t work. It was dry as a stick.

I think you could avoid this but it would take practice.

I overcooked it for fear of food poisoning, but with a food thermometer, you would have the confidence to cook the meat for less time.

The stuffing was an absolute revelation. My improvised method turned out to be a total winner and much quicker.

I’ll definitely do that in future.

The other issue is bringing everything together warm was hard given that most microwaves are not large – and you have to do one food item at a time.

With an oven roast, you can stick everything onto the tray.

Even with a single portion, what with the stopping and checking and the fact you can’t easily cook things together you don’t actually save much time using the microwave. Perhaps 10 minutes.

How much money did I save?

I used my oven for half an hour on the first night, which would have cost 35.5p.

There were also some additional costs for using the gas, but this was the same in both tests.

So using a microwave saved me 33.7p on the cost of the meal, which if done every week, would add up to a total saving of around £17.50 over a year.

Will I do it in future? Yes! I’m going to avoid using my oven as much as possible from now on as electricity is just insanely expensive.

I just need to work on the meat, or I might choose veggie alternatives to meat that microwave more easily.

If it means eating food that’s softer and less crispy, it’s a small sacrifice to swallow.

An energy expert recently revealed the cheapest way to cook a meal.

Plus, we explain whether it’s cheaper to use an air fryer, slow cooker, oven or microwave.