SHE faced an influx of criticism when she revealed the extremely unusual name she and her husband had chosen for their son.

“Ok, so his middle name is the same as his dad’s which is Maverick,” Jasmine explained as she responded to a follower asking about her baby’s middle name.

“So it means that his initials are all Ms which we thought was pretty cool and we planned,” she added.

While Jasmine goes by Chiswell professionally, her husband’s surname is McNielly, which means their baby is Midnight Maverick McNielly.

The unique moniker certainly divided opinion in the comments section of the TikTok video, with some loving how “superhero” it sounded.

“Midnight Maverick sounds like a marvel superhero,” another added. “So cute.”

And a third commented: “Midnight Maverick McNielly, that kids going to be a film star.

“What an awesome name.”

“Yoo he has a superhero name !!!” another comment read. “Peter Parker. Bruce Banner, Wade Wilson and now Midnight can join the crew !!!” 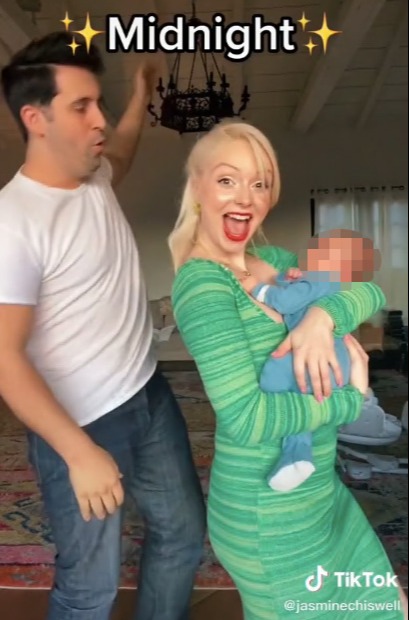 Jasmine previously found herself at the centre of backlash when she revealed the baby’s first nameCredit: TikTok / @jasminchiswell

But others were less complimentary, with one writing: “I’m not sure which name is worse.”

Another added: “I thought his name couldn’t get any worse.”

“sounds like a dogs name,” a third cruelly wrote.

“Midnight Maverick McNielly that’s terrible so sorry for that baby,” another comment read.

Speaking of names, this woman can’t stand her son’s name and can’t even bring herself to say it out loud.

This lady told her sister she hated her new baby’s name but was accused of being “closed-minded”.

And this mum wants to name her twin boys after Harry Potter characters.