A WOMAN has revealed how she got an inspirational quote in tribute to her dad, and was mortified when she twigged the very sexual meaning.

Rhianna Cooper, from Daventry, Northamptonshire, got the sentimental inking when she was 18 – and says she regrets going under the needle before thinking it through. 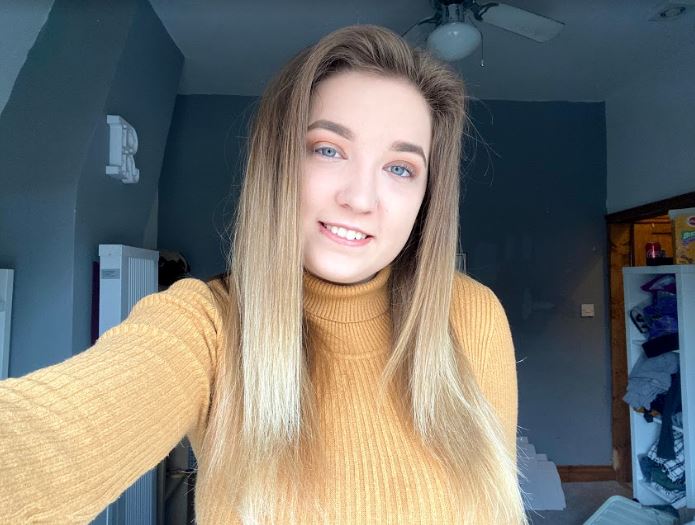 Now 22, the business analyst got the “make it count” tatt on her upper back and only realised the innuendo a year later – during a chat with her then-boyfriend.

Speaking to Fabulous, she explains: “If I’m having sex and my boyfriend is behind me, the words ‘make it count’ are the first thing he sees.

“I only realised about a year later when my boyfriend made a comment. I thought ‘oh my God, how did I not spot that at the time?’

“The reason I got that tattoo is my dad would always say to me ‘you’ve only got one life, make it count’.

“I thought my back was a good spot because I was still at school at the time and I didn’t want anyone to see it. But I realise the placement is far from ideal now.” 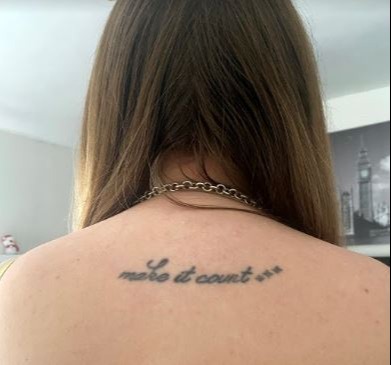 She was mortified when she realised ‘make it count’ would be the first thing her boyfriend saw during sexCredit: Rhianna Cooper

The quote was Rhianna’s first tattoo and she’s since added seven more.

But she’s steered away from words, instead getting sketches of her dog, poison ivy, a puffer fish, a lotus flower, a crab and a large turtle.

She says: “I do regret it, I later thought of lots of other things I could have got instead.

“It would have to be nice to have waited a bit longer and really thought about it, but equally my teenage years were a big part of my life so I don’t regret getting a tattoo young.

“When I first realised the sexual meaning, I was like ‘oh my God, I’m going to have to get this covered up, this is awful’.

“But then I thought ‘who really cares?’ No-one’s going to piece it together unless it’s a long-term partner who I’m with’.

I do regret it, I later thought of lots of other things I could have got instead. When I first realised the sexual meaning, I was like ‘oh my God, I’m going to have to get this covered up, this is awful’

“At the end of the day, it’s just a tattoo. If you see it walking down the street, you don’t instantly go ‘oh my God what an awful tattoo’, you wouldn’t even think about it.

“My family have never cottoned on, I think you’d only realise when I’m in a compromising position.

“My mum came with me to get the tattoo and I showed my dad, but he never said anything.

“I’ve only been in one relationship since then and I brought it up with my current partner.

“I asked him ‘did that ever occur to you?’ and he said ‘no to be honest it didn’t but now you’ve mentioned it that’s actually quite funny’. He just laughed it off.” 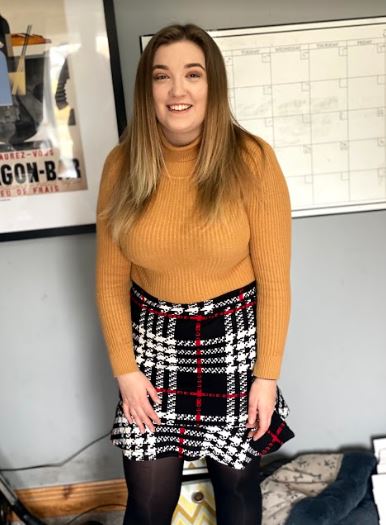 Rhianna says she does regret the choice of inking – but just laughs it offCredit: Rhianna Cooper

Rhianna’s thoughts have now turned to how to cover the embarrassing inking.

She says: “I don’t think I’d get it lasered but I’ll probably get it covered at some point.

“My mum passed away in November so I was thinking of getting something for her and I’m running out of space to be honest.

“My mum always used to call me ‘pudding’ so I might get a little pudding.

“I’ve saved the last birthday card she sent me so I was going to get a little extract, saying ‘I love you pudding’ or something like that, in her handwriting.”

Which tattoos do people regret the most?

Fabulous previously spoke to Vanessa Charest, an Aesthetic Nurse at London Real Skin in Holborn, who revealed some of the most common tattoos people get removed and the body parts they regret getting inked the most.

“The tattoos that we are currently treating with Laser Tattoo Removal vary.

“Some of the common areas include the lower back on females, and for the men it’s the sleeve of tattoos.

“We have seen a few on the wrists, as well as on the upper part of the back and back of shoulder.

“The most common tattoos include initials or letters that clients are looking to have removed, typically signifying a past relationship, and quotes and sayings are usually quite common.

“Stars and shapes are common amongst females. “

Expert Vanessa Charest, an Aesthetic Nurse at London Real Skin in Holborn, previously told Fabulous “quotes and sayings” are among the tatts people are most likely to get removed.

Rhianna is not surprised and has some choice advice for anyone who’s thinking about getting quote.

“And if it is a quote you’re getting, just make sure it’s relevant.

“All my tattoos have got some sort of personal meaning, even the ones which are just nice doodles, so I’d advise that – as it’s going to be on your body forever.”

We previously reported on a woman who was mortified when she clocked the very sexual meaning of her crotch tattoo.

‘We can’t find your son if you can’t’, mum says police told her