How to make the perfect Korean fried chicken – recipe | Food

“Koreans,” according to Vice magazine, “are the undisputed Asian masters of chicken.” I suspect there may be some dispute over this, but even a few Filipinos, themselves no slouches when it comes to chicken, concede South Korea’s mastery of the deep-fat frier. Despite its ubiquity – in 2016, there were more than twice as many fried chicken restaurants in the country than all the hamburger, pizza and sandwich joints put together – KFC is a relatively recent phenomenon, introduced, it’s said, by US soldiers during the Korean War, and made more accessible by falling food prices and a rise in disposable income in the decades that followed. What was once an occasional treat has become the takeaway of choice, perfect for sharing with kids or to partner a cold beer.

One of the things that sets Korean fried chicken apart from other varieties is that it often comes bathed in sauce – South Korean YouTube star turned author Emily Kim, AKA Maangchi, has seven different recipes on her website. If you lived in South Korea, you could probably get them all delivered to you in less time that it takes to finish this piece. But if you don’t, well, keep on reading.

For Andrea Geary, smaller cuts are much better for the deep-frying treatment. All thumbnail pics by Felicity

Wings are the thing here: portioned whole chickens are apparently traditional, but, as Andrea Geary explains in Cook’s Illustrated, Korean birds tend to be smaller than US ones, and thus lend themselves better to deep frying. Larger chicken breasts or thighs have a tendency to burn on the outside before they’re cooked through, so if you’d prefer to use those cuts, divide them into smaller pieces before use, and note that, as J Kenji López-Alt explains, dark meat, such as thigh, is better suited to the high temperatures involved.

You’ll be in good company with wings, though: Michelin-starred chef Hooni Kim describes them as “my favourite part of the chicken [with] enough fat and bone to keep the meat very moist during the cooking process”. I would suggest separating them into the rather tweely named drumettes and wingettes, as Judy Joo and Geary explicitly recommend (photos of other recipes hint that some, such as Maangchi, assume this is obvious), because it makes them much easier both to cook and to eat. That said, López-Alt favours “meaty, whole-wing portions with the tips still attached, rather than drumettes and flats”, so if you’re not handy with a cleaver, and don’t know a butcher who is, keep them intact with Kenji’s blessing.

Chickens, inconveniently, come encased in skin that’s designed (let’s not get into that here) to repel water, a quality that is useful for the chicken, but less than ideal when you’re hoping to coat it in batter. López-Alt likens his solution, in which the wings are dipped in a mixture of cornflour, salt and baking powder and left to air dry for an hour, to “a painter rolling on a layer of primer to make sure the paint sticks to the walls”. The baking powder raises the pH of the skin, which apparently helps it crisp, while the cornflour absorbs moisture, creating a better surface for the batter to cling to, a science even I can understand. 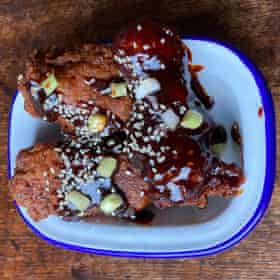 Joo’s recipe, from her book Korean Soul Food, brines her wings with pepper, lemon zest, ginger, garlic, onion, leek and soy bean paste for 24 hours before they’re dunked in seasoned cornflour, while Hooni Kim goes for a shorter, two-hour bath in soy, sake, garlic and ginger, before administering a coating of potato starch and leaving them to dry for 30 minutes. He explains that the marinade “gives the flavours a longer finish and accentuates the sauce”, but we all feel this step is gilding the lily here – chicken wings have enough flavour of their own.

Forget the chicken; it’s the batter that matters. Rather than the craggy, crunchy crust of the American version, Korean fried chicken tends to favour a thinner, crisper coating that shatters under the teeth, and also needs to be robust enough to stand up to being tossed in sauce without becoming sadly soggy. 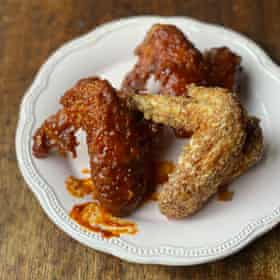 The simplest “batter” is Hooni Kim’s second layer of potato starch, which proves astonishingly crunchy, if a little powdery in comparison with the other recipes, which all use some wheat flour as well. Geary explains better than I can why the combination works: “The proteins in wheat flour help the batter bond to the meat and also brown deeply; cornstarch (a pure starch) doesn’t cling or brown as well as flour, but it crisps up nicely … because pure starch releases more amylose, a starch molecule that fries up super-crispy. Cornstarch also can’t form gluten, so it doesn’t turn tough.” (The more readily available cornflour is also marginally preferable to the potato variety, because of its higher amylose content.)

After trying Geary’s more flour-heavy recipe and Maangchi’s starchy one, I decide on López-Alt’s 50:50 ratio as the best of both worlds: it’s delicately crisp, but has enough integrity to withstand the onslaught of sauce. I’m pro raising agent, which, thanks to the bubbles it produces when it hits the hot oil, yields lighter, airier results, but I don’t see enough difference from replacing some of the water in the batter with vodka to make the investment worthwhile. (As food scientist Harold McGee has written, alcohol dissolves some of the gluten in wheat flour, making the batter less tough, and evaporates faster than water, so it crisps quickly before the contents have a chance to dry out, but chicken cooks rather more slowly than the white fish for which Heston Blumenthal came up with the idea, so this is less of a problem.) 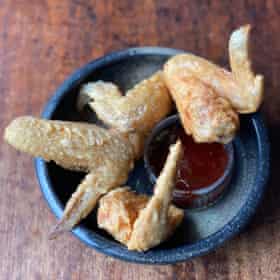 Maangchi is the only one to use eggs in her batter, creating a substantial crust that I’d describe as more American in style (though, seeing as she taught herself to make it by watching the owner of her local Korean chicken shop, it’s clearly not), while Joo credits her “extra-crispy” batter to the addition of matzo meal. Both are absurdly crunchy and delicious, but lack the delicacy of the thinner versions, which, as the thing that apparently sets much Korean fried chicken apart, feels like the goal here.

I won’t be flavouring my batter with chilli flakes, garlic or onion powder, as Joo recommends, or indeed with as much salt as López-Alt uses, because I don’t want it to compete with the sauce; if you’re serving this on its own, however, you may wish to adjust the seasoning. 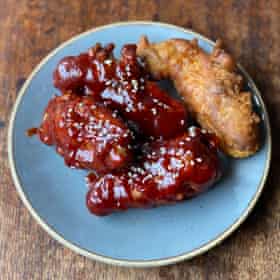 One of the reasons often cited for Korean fried chicken’s extraordinary crispness is the double frying technique, where it’s first fried at a relatively low temperature until the chicken is cooked through, then again at a higher temperature to set the crust. Joo and López-Alt don’t bother doing this, with the latter explaining that he doesn’t feel it makes much difference with such a thin batter, “other than allowing you to rapidly re-heat and serve large portions of par-cooked chicken”, which is probably why it’s popular in restaurants. Geary, however, argues that the lower temperature is vital for driving all the moisture out of the meat without overcooking it, thus making for a more crisp result. López-Alt’s chicken is deliciously juicy and crunchy straight out of the fryer, but the double-fried varieties do seem to stand up better to the sauce, so I’d recommend going the extra mile.

Sweet soy, honey butter, spicy garlic – Korean fried chicken comes in many flavours, but my favourite is what is variously described as “sweet, sour and spicy”, “sweet and spicy chilli” and “spicy Asian”, a sticky-sweet yet intensely savoury sauce in which the heat can be adjusted to taste.

The base to almost all the examples I try, with the exception of Hooni Kim’s, is gochujang, a rich, sweet Korean red pepper paste. Kim uses a mixture of sriracha and Indonesian sambal oelek for spice instead, which makes his sauce thinner and tangier than the others – and also rather addictive, because he finishes it off with a liberal amount of butter (well, he did train at Daniel, the New York Michelin-starred French restaurant, before opening his own places). Gochujang feels the classic choice, however.

Some recipes contain a hefty hit of soy sauce and sesame oil, but my favourite, Maangchi’s version, keeps things simple with just a little garlic and some rice vinegar to balance the sugar, though I’ll be adding ginger as well, because its sweet heat works so well with the other flavours here. Like the chicken, you can make this in advance. Then all you have to do is finishing frying the chicken, combine the two and put out the napkins. 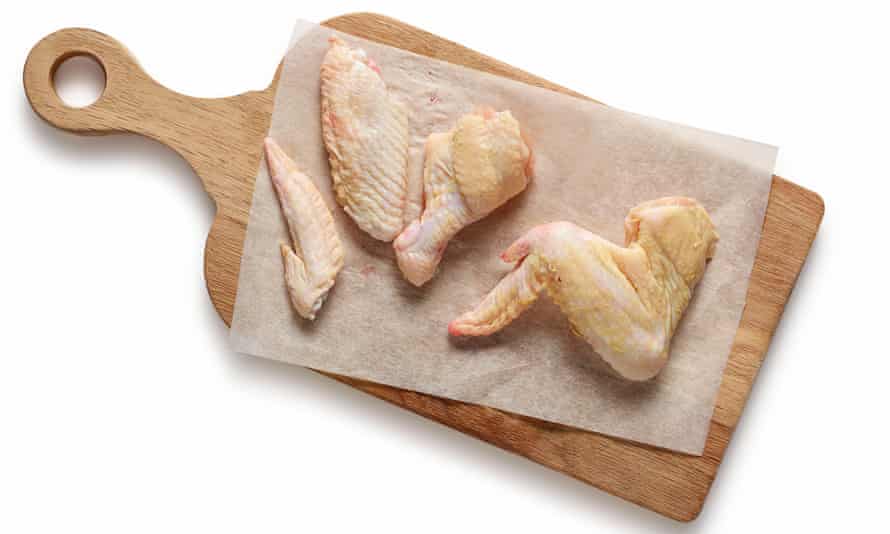 Start by separating the chicken wings into two pieces, if they’re not already. Stretch the wing out and use your fingers to find the joint where the flat drumstick part meats the wing proper. Position the blade of a heavy knife on this and press down with the palm of your other hand to cut through. Do the same where the wing tip meets the wing (look online if this isn’t obvious). (The wing tips can be saved and used to make stock.) 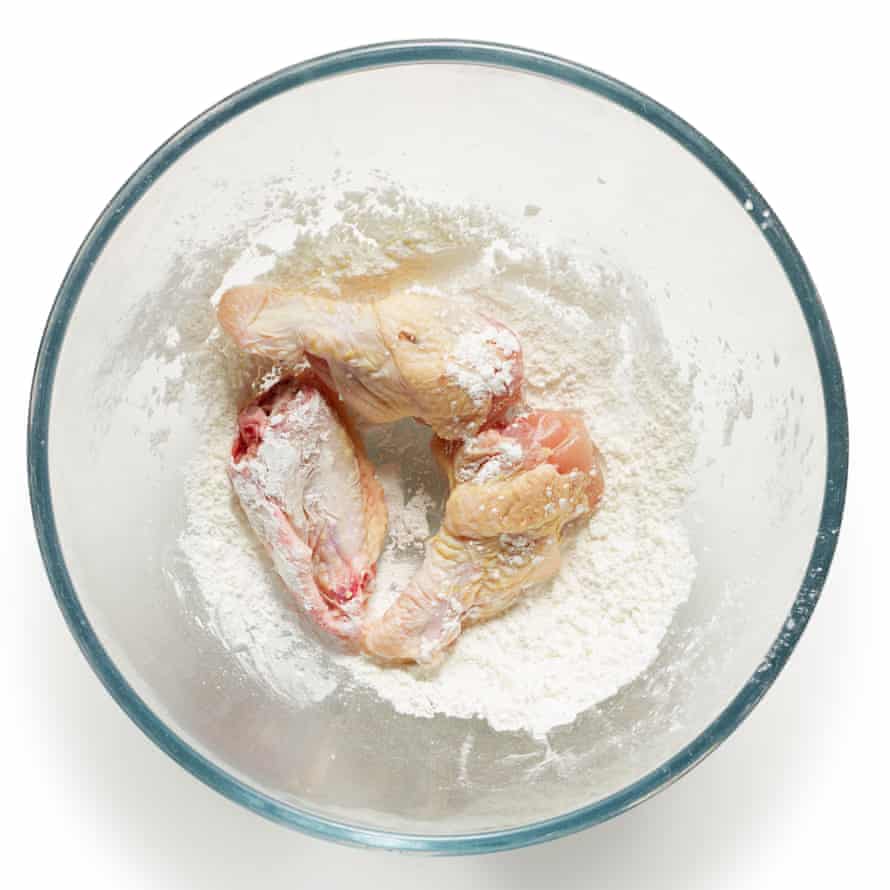 Whisk two tablespoons of cornflour and a half-teaspoon of baking powder in a bowl, then toss each chicken wing in the mix to coat. Spread out on a rack set over a roasting tin and refrigerate, uncovered, for at least 30 minutes.

Meanwhile, make the sauce. Heat the oil in a small frying pan and cook the garlic and ginger until fragrant. Stir in the remaining ingredients, bring to a bubbling simmer, then set aside. 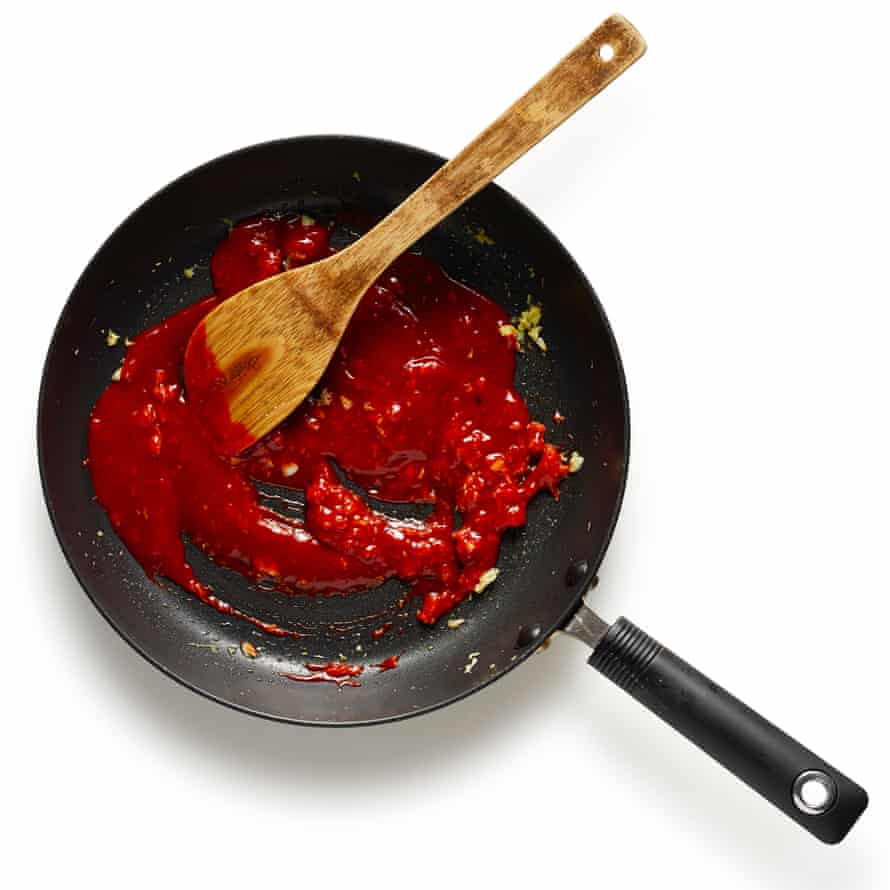 When you’re ready to start cooking, take the chicken out of the fridge and heat a deep-fat fryer (or a wide pan no more than a third full of neutral oil) to 160C/325F. While it’s heating up, put the two flours in a wide bowl, whisk with the baking powder and salt, then add enough water to make a loose batter the consistency of single cream. 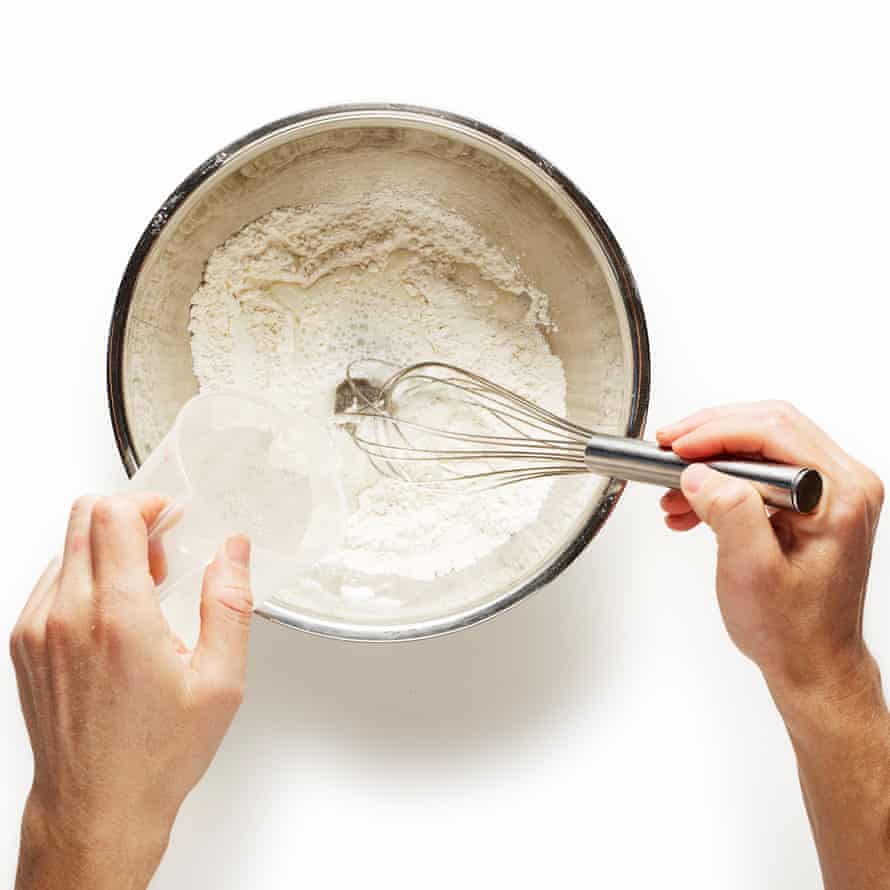 Add the chicken pieces to the batter, stir to coat, then, working one at a time, shake off any excess batter and drop into the hot oil – be careful not to overcrowd it or the temperature will drop too far. Cook for eight to 10 minutes, until lightly golden, then lift out on to a clean rack and repeat with the remaining chicken. 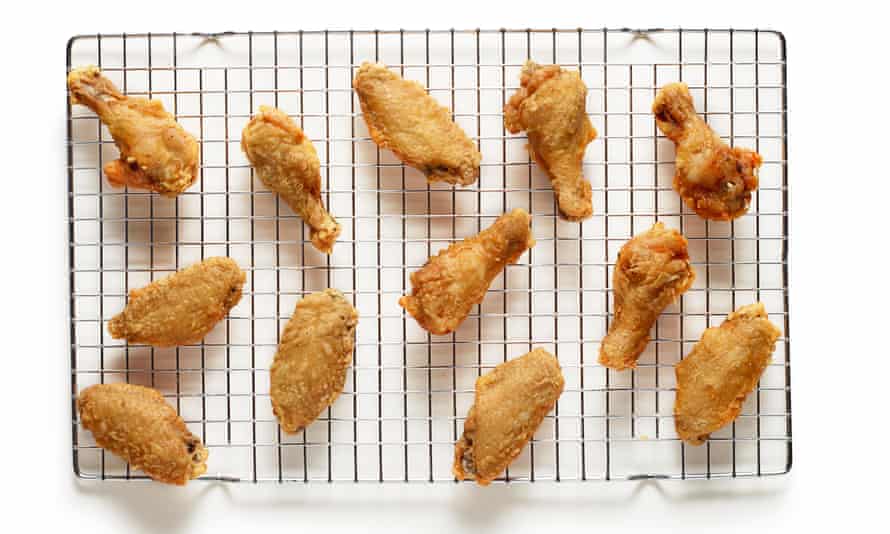 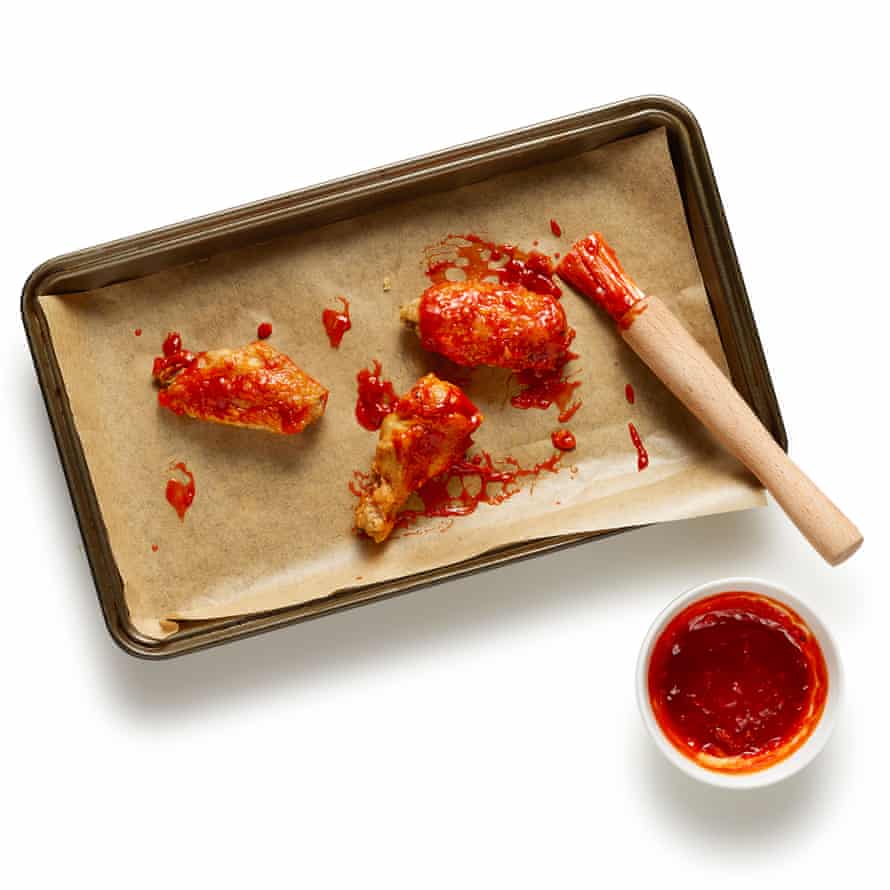 Scoop the chicken back on to the rack, or put in a warm oven. Reheat the sauce and paint it all over the fired chicken, or toss the two together in a bowl. Transfer to a serving bowl, scatter with the spring onions and sesame seeds, if using, and eat immediately.

Is Korean fried chicken the king of wings, or do you prefer the Southern, Filipino, Japanese or another style entirely? Which sauce do you prefer, and where does the best version, in your experience?

Out of style: Will Gen Z ever give up its dangerous love of fast fashion? | Fashion