HORROR football riots have left at least 127 people dead including children and police officers after fans stormed the pitch.

Arema FC fans invaded their ground when the team lost 3-2 at home to their bitter rivals at Kanjuruhan Stadium in Indonesia. 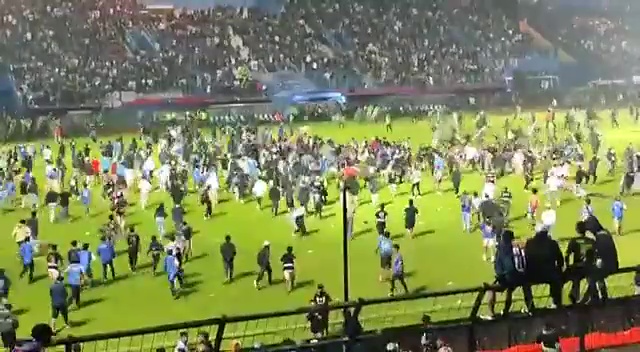 At least 127 people including children and police officers were killed in a football riotCredit: Twitter 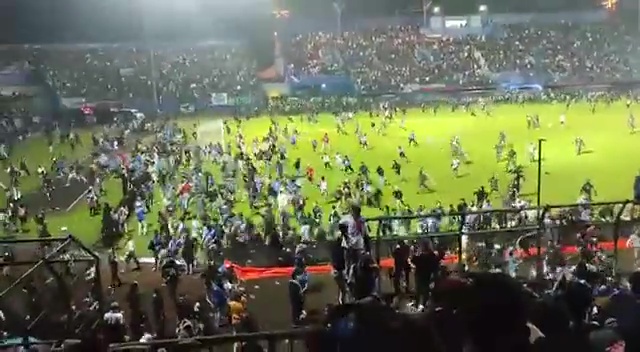 Arema FC fans stormed the pitch after the team lost 3-2 to their bitter rivalsCredit: Twitter 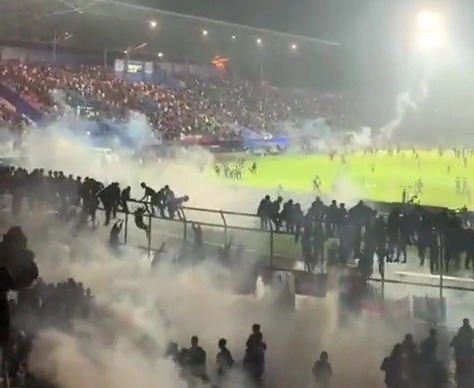 Harrowing footage showed out-of-control spectators climbing over fences as they tried to escape the smoke.

Another clip posted online appeared to show hallways of a nearby hospital lined with dead bodies.

Local reports suggest medical facilities have struggled to cope with the influx of battered fans, causing the death toll to skyrocket.

“We share our condolences and hopefully this will be a valuable lesson for all of us,” he said.

All remaining BRI Liga 1 matches will be suspended for a week while the Indonesian FA confirmed Arema will not host any more games for the rest of the season.

The Football Association of Indonesia (PSSI) said it would start an investigation into what happened after the game.

Mr Lukita said: “We announced the decision after we received a direction from the Chairman of PSSI. We are doing this to respect everything and while waiting for the investigation process from PSSI.”

“We are sorry and apologise to the families of the victims and all parties for the incident. For that PSSI immediately formed an investigation team and immediately left for Malang.”

Arema took an early 2-0 lead against rivals Persebaya Surabaya before the away team slipped two goals past them by half time and a third in the second half.

The loss was too much for Arema fans who stormed the pitch in protest.

Riot police swept in to disperse the hooligans with tear has and charged in with shields and batons.

Police pushed fans back into the stands and were spotted clobbering them with their batons and kicking others.

Fans then began trampling over one another as they fled for safety.

Other images showed police cars burnt out on the pitch and rioting outside on the streets after the match had ended.

Local outlet Kompas claims the tear gas did not disperse, leading to a shortness of breathe and unconsciousness.

Persebaya’s official Twitter account has posted: “Persebaya’s extended family deeply mourns the loss of life after the Arema FC vs Persebaya match. No single life is worth football.

“We pray for the victims and may the families left behind be given strength.”